Guest Author Kevin McVicker Has a Question About Cap!

As I praised the latest Captain America movie on Facebook this past weekend an interesting conversation started between an old friend and myself. He stated that his only complaint, and a complaint he had seen in reviews, was “why did Captain America use a shield as his only weapon?” As a comic book fan, I’ve honestly never asked this question. That’s like asking why does Spidey use web-shooters or why does Thor use a hammer or why is Iron Man called that when a suit actually made of iron would be inconceivably impossible to maneuver. There are some questions we as comic fans sometimes don’t ask, so I decided to ask the question and find the answer to why Captain American uses a shield.

As I started to think about the question, the symbolic and philosophical path quickly became muddled with a cornucopia of answers. This is because each writer thinks about this question and answers it themselves with their own theory for the character. Personally one of my favorites that I’ve read is that Captain America doesn’t like the idea of soldiers being armed on American soil. The more satisfying answer which I’m personally looking for lies more in the history of the industry and pop culture.

The obvious place to start would be in the 1930s and 40s during the Golden Age of comics. While this is a good place to start, I don’t think the best answer lies there. If you’ve read Golden Age comics featuring Captain America you’ll undoubtedly realize that as a soldier fighting in a war, he was in fact shown holding and using guns. Both he and Bucky were represented using firearms, and this wasn’t as big of a deal as you may think because they were soldiers in war during a real life time of war. What we can glean from this era of comics is why Captain America even had a shield. A rival comic company called MLJ (now known as Archie Comics) had a character called the Shield. He was the first patriotic hero and had a shield shaped torso. When Captain America came out eighteen months later with his triangular shield in the first issue, it created an uproar with MLJ who believed that Timely Comics (now known as Marvel, which you should know) had copied their character’s design for the shield. If you look at both side-by-side, it isn’t too hard to see the similarities. At that time in comics it really wasn’t too strange to see knock-off copies of other characters. There are really only several base models of heroes at that time and they are constantly getting diluted and copied by other publishers. If you don’t believe that happened, look at this history of comics even into the 90s, mainly how many character designs at Image Comics looked like Deadpool, Cable, or Shatterstar (but this may just be due to a weak creative mind who constantly stole from his only few decent creations). So, I think that Captain America probably has a shield because patriotic characters around that time also had them, but I don’t think that entirely explains why this is the only weapon he uses. 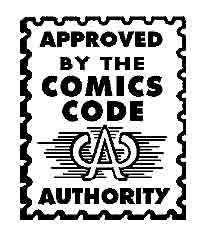 The Comic Code of Authority

For the answer, I truly believe it lies in his reintroduction to comics during the Silver Age and the infamous Comic Code of Authority. As a short and cursory
introduction to the Comic Code of Authority, in the 1950s a book called The Seduction of the Innocence was written by Doctor Fredric Wertham. He noticed that predominately all books read by children who were juvenile delinquencies were comic books. In a feat that was both astoundingly unscientific and illogical he concluded that comic books created juvenile delinquency. His widely read book stirred up a great amount of controversy and ended up making the comic companies band together to create the Comic Code of Authority, which was a self-regulatory board that held comics to a high moral standard. This authority infamously tried to undermine Stan Lee’s attempt to do an antidrug story arc in Amazing Spider-Man (issues 96 – 98) which was asked of him by the US Department of Health. It is a rather moving story where Spidey is fighting the Green Goblin, while at the same time Harry (the Goblin’s son) has overdosed on pills. Spidey ends up defeating the Goblin by maneuvering him on his glider to outside Harry’s hospital room where he laid in a coma. The Goblin, struck by what his son has done, is too overwhelmed and grief stricken, bursts into tears, and flies away. This emotionally powerful tale of the destruction which drugs can cause was not allowed to have the Comic Code of Authority’s approval seal on the three issues.

So now that you have a little understanding in the illogic from whence the code came and the illogic behind its decision making, one part of the Comic Code of Authority states that “excessive and unnecessary knife and gunplay” are to be removed from any comic. It is difficult to imagine now with the overwhelming number of heroes and antiheroes which all use guns, but up until the Punisher crashed the scene in the mid-70s the most violent hero might be considered Hawkeye, who was just a Robin Hood knock-off. Heroes didn’t carry guns, and part of that reasoning most likely came from the Come Code of Authority. If you read comics from the Golden Age it was surprisingly not uncommon to see vigilante detectives use guns to shoot and kill their enemies. Batman even did so in his first issues. But by the time of the Silver Age and the fallout due to Wertham’s book, heroes no longer used guns except for the few war themed comics. 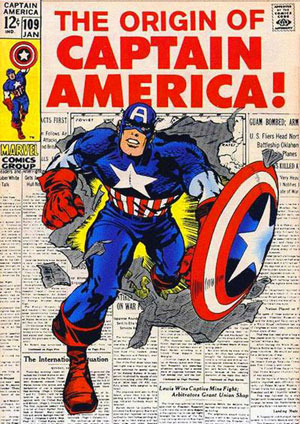 A Man Who Uses a Shield…

With Captain America’s rebirth during this period, even as a former soldier, it is hard not to think that even if it was brought up that Captain America use a gun it was quickly abolished due to the Comic Code of Authority. This was also the period in which Captain America was defined as a character. Although his patriotism, charismatic smile, and Nazi-smashing right hook were always clearly present, the man out of time that we know and love was lovingly crafted and created in the Silver Age by the giants Stan Lee, Jack Kirby, Jim Steranko, and Steve Englehart. These men, under the restraints of the Comic Code, told amazingly fantastic stories which laid the foundations for the uncompromising hero we admire today, and In that confinement Captain America was defined as a man who used a shield, a defensive weapon, because heroes don’t kill.

While we could ask Stan Lee twenty times and get twenty different answers, I strongly believe that this is a logical conclusion on why Captain America uses only a shield. Every writer defined after this point why a soldier wouldn’t pick up a gun and would continue to use only a shield. And though each put their own spin on Captain America’s nonlethal choice, this unwavering commitment over the course of his Silver Age and beyond career is a defining mark on liberty’s defender.