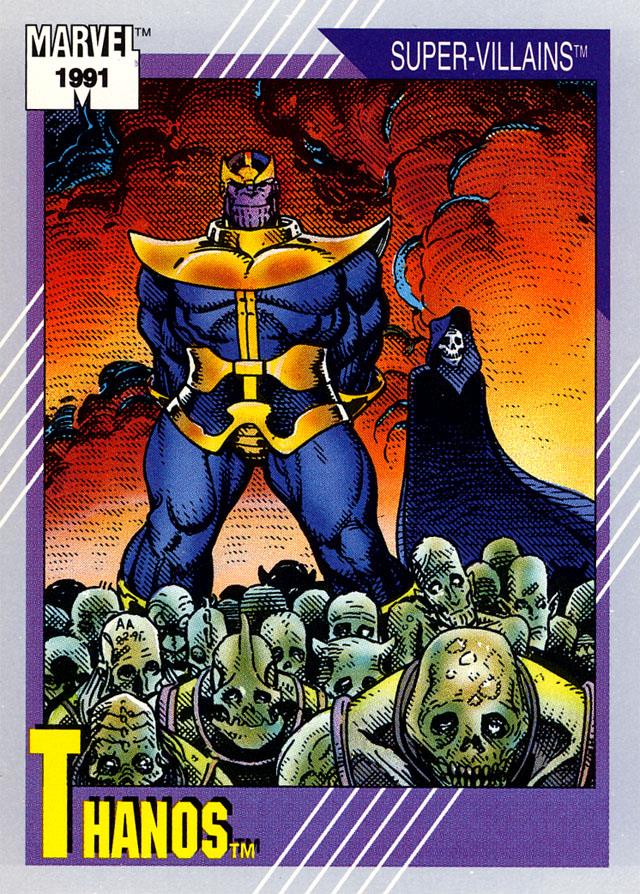 During the late 80s and early 90s a boom occurred when people started to realize that all the old toys, comics, and other collectables that they had owned as children were now a viable commodity with fandom willing to buy these things. Apart from this making the comic industry dump massive amounts of comic prints into the market thereby saturating it to the point that most comics from that period are worthless (good reads, just worthless), Marvel also started seeing a possible desire for them to stretch into other markets. For those of you unfamiliar with the collecting boom of the late 80s and early 90s, I have developed a short play based on an incalculable amount of conversations I have had with people who found out I collect comics. I call it: “Don’t You Have Google?”

Hey, man, I got a few comics. You interested in buying them?

Sure. Let me see what you have.

Here you go, man. It’s number one. That means it is worth a lot, right?

Ah. X-Men #1. No. These were over printed so they’re basically worthless unless it’s in perfect condition. And it looks like this one was used to feed small rodents.

So what will you give me for them?

You can give it to me and I’ll give it to a small child to enjoy, but no one will give you anything for these. 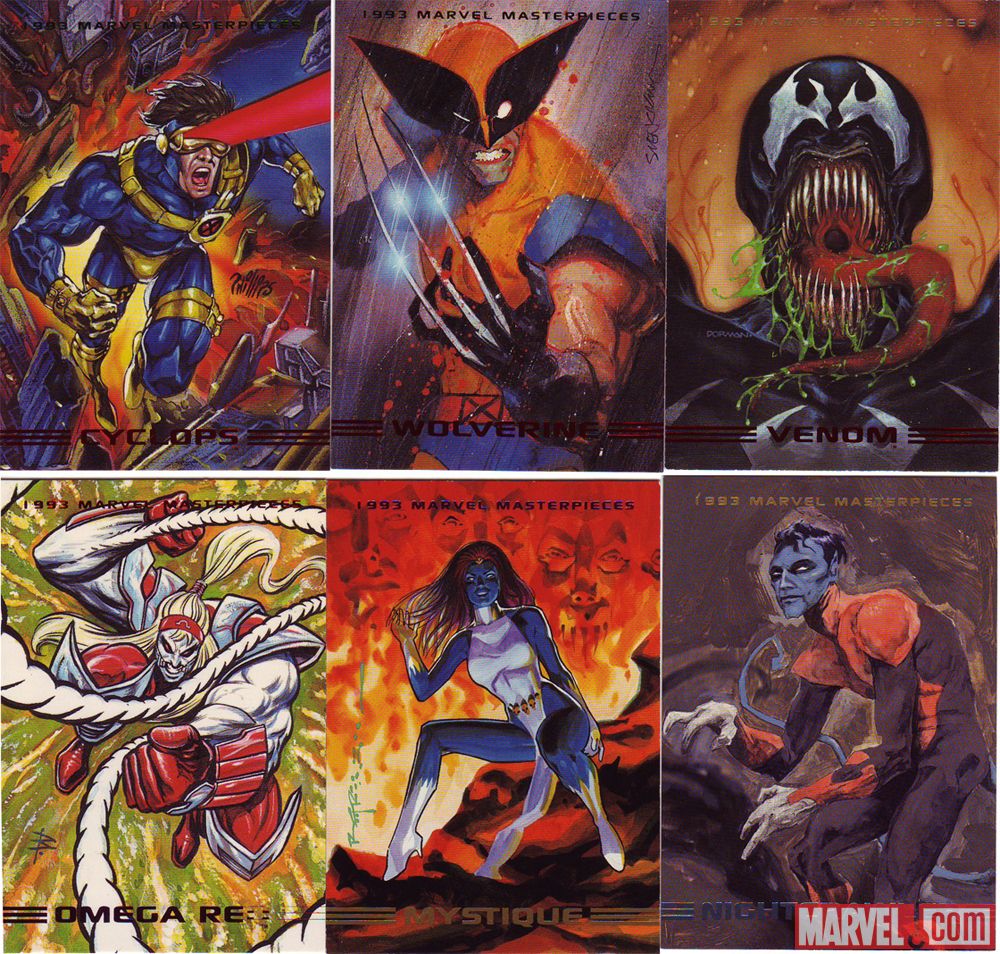 One large market in which they became engaged also created a means by which I was able to discover much in the history and characters of the Marvel Universe, and this was the Marvel Trading Cards. Marvel created several different series of Marvel trading cards, each with a short blurb on the back and a colorful graph showing their particular power levels. While for some this was impression, it really began to show how weak and stupid some characters were. This is how I began to realize that the Absorbing Man was basically stupid and Aunt May was truly feeble and it was shocking that she was still alive. And to answer your question, yes, there was an Aunt May card, and when the first series came out it was difficult to find. I actually paid two dollars (that was the price of two unopened packs) for that card to help complete my set. 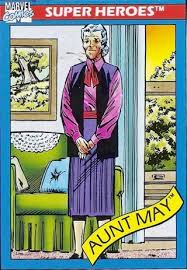 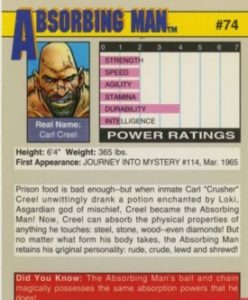 I had several friends who would collect too and we would go to card shops and buy sleeves that would fit into our three ring binders to loving hold and protect our valuables. During the school year I would have to take these out because my mom refused to buy me addition binders. She didn’t understand that my Marvel trading cards were more important than anything I’d learn in school. Who needs to know about photosynthesis when you can learn Andromeda is Thanos’ niece? That’s the important stuff (which I believe was later retconned). 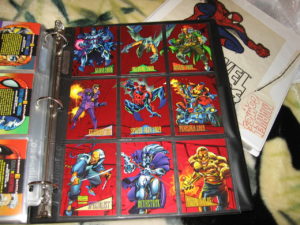 My friends and I would trade, and each card had its own value. Wolverine was worth a Hulk and a Ghost Rider, while Thanos at that time didn’t have the clout which he carries today, so I got him merely for a Fin Fang Foom and Mojo. Spider-Man was worth three to four cards depending on if the person had doubles, and once you got him he deserved his own solo hard sleeve which fit perfectly into your back pocket in case you needed to show him off at school and ensure the bullies that you indeed deserved to be beat up. 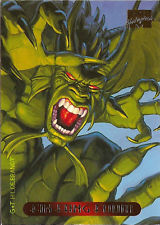 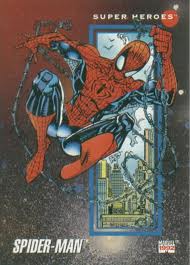 Marvel also started to create trading card series based on particular properties. I collected all the different Spider-Man series which is why I know who both Thomas Fireheart and Jackson Weele are, unlike Farmer Andy (who should stop killing small critters and start reading comics). The Spider-Man series also eventually ran out of ideas and started creating amalgam villains from various foes of Spidey. I assume this was the inspiration for the Carnage coated Doctor Octopus (Octocarnagepus or Doctor Carnie?) from the first Playstation Spider-Man video game. Other companies got in the act in creating trading cards, and in an annoying tradition (toy collectors understand) Todd MacFarlane made the Image trading cards larger than all the others and made it impossible to fit in your normal pouches (but potentially worked perfectly for the ones which litter Rob Leifeld’s drawings). 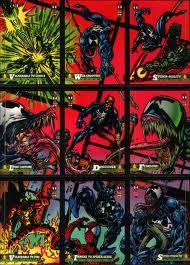 Later on, in series three the creators of the cards caught wind that my friends and I were holding out cards in the three-by-three sheets in our binders, and they started to create sets of cards which when placed together would create a larger image. I hunted and sought for cards to fill the gaps while my friends moved on to girls and learning to drive. I would not be deterred to foolish notions of adulthood and the strong swaying argument of my hormones. I continued to collect until I filled out both the blue and gold X-Men teams. 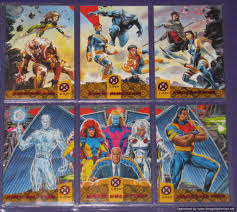 As I looked at my achievements I realized that my friends were right. I put the trading cards away and learned to play guitar on which I wrote many songs pining for the girls who sadly already realized I was a huge geek. Unlike today, geek was not chic then, but rather a scarlet “G” embroidered upon my hand-me-down and no longer functioning purple hypercolor shirt. It probably didn’t help that instead of learning to drive I also rode my mom’s cruiser bike around town.