For this column, Marius Vanias explores different books in the Marvel Universe and how he might have imagined them. You can check out what he had to say about Daredevil here!

When Marvel kicked off their reboots for the MARVEL NOW theme, for some reason…we ended up with TWO X-Force books. One was called Uncanny X-Force, and was written by Sam Humphries and featured Storm, Psylocke, Fantomex, Cluster, Spiral, Bishop, and for some odd reason Puck. Being honest, I wasn’t all that into this series. The writing and the characters just didn’t reach out to me. Bringing in Spiral as a team member is a cool idea. Puck, I hate Puck! And I’ve always loved Psylocke but this series picked up on the whole romantic situation she has with Fantomex that Remender left us after his volume of Uncanny X-Force; at this point I just don’t care anymore. She started off flirting with Cyclops, dated Warren for years, leaves him for Thunderbird III, dies, comes back to life and dates Age of Apocalypse Sabretooth, comes back to Warren, Warren dies, and then she dates Fantomex. I just can’t follow this character anymore. Psylocke and Archangel(Warren) should have just gotten married a years ago. Sorry for rant! MOVING ON!

The second book we got was called Cable & X-Force, kinda like Wolverine & The X-Men. So pretty soon we’ll get Captain America & The Avengers or Spider-Man & The Daily Bugle! This series was written by Dennis Hopeless and a favorite artist of mine, Salvador Larroca. Now, not knowing the writer, but loving me some Cable and Larroca, I gave this book a chance. This, hands down, became one of my favorite monthly comics after the first issue. It felt refreshing, like when Brian Michael Bendis started New Avengers, you just knew you were in for something different. And I have to say, hearing that the book was being dropped after issue #17, my heart sank a little. It felt like we had just started getting involved with something that had so much potential and didn’t reach its high point yet, and was so close! Kinda like when shows like: Journeyman, Tron: Uprising, Terra Nova, Almost Human, and Firefily all got cancelled after one season. You thought to yourself, “Just a little more time and it would have been awesome!”
Let’s talk about the team!

-The leader of the team was Cable, coming straight from Avengers X-Sanction where he took down an entire Avengers team to try and avoid Avengers vs X-Men, and the Avengers came after Hope. The techno-organic virus has been healed from his body but left his left arm useless as it had no muscle as it had never really been used. He lost an eye. He also started to have these premonition and visions of drastic events happening, so he puts together a team to prevent them from happening. 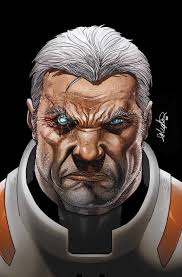 -Domino, coming from her time in X-Men by Brian Wood, showed up along with her teammate, Colossus. Domino and Colossus also start a relationship that I don’t think anyone saw coming, and we all shrugged and accepted it. Usually she’s involved with Cable or having a fling with Wolverine. 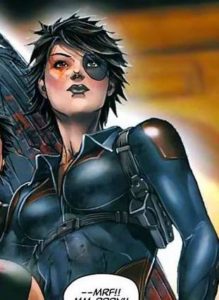 -Colossus, very recently being possessed by the Juggernaut demon and then the Phoenix, is now on the run as an enemy of the state. He was bald for a while so I would have kept the Destro look for this series as I liked it more. Like everyone else in the Phoenix Five, his mutant powers are now out of control as the metal around his body is in constant motion and changing.

-Forge, which we last saw during Astonishing X-Men where he went crazy and died, (which is touched on a few times in this series) provides tactical support. 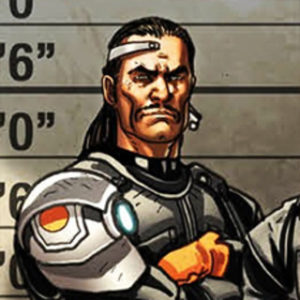 –Doctor Nemesis, coming from Uncanny X-Men and X-Club, provides the brains for this team. When images first came out for this series a lot of people on the internet complained about him not having his signature hat and now having a mask on. When you read it, he tends to switch from hat to mask during combat, which makes sense. 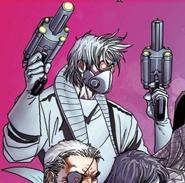 Funny thing is, even though Cable put this team together to prevent these vision’s he’s having, they’re also there to keep him alive as we learn these visions are also killing him. Domino and Colossus, you can say are there to protect him while Forge and Dr. Nemesis are there to physically repair Cable. Cable gets a weaponized arm to assist him with his left arm that has never been used due to the virus. He starts off with an eye patch as he’s missing an eye, and later on gets a weaponized eye! We also have Hope Summers in the series, Cable’s adoptive daughter. Hope is now a public figure as she saved the world from the Phoenix force during Avengers vs X-Men, and is now searching for Cable. Cable has these visions of bad stuff happening, and as the team tries everything they can to prevent them, they start to look like mutant terrorists. The Uncanny Avengers, led by Havok, Cable’s uncle, starts to hunt down the team to stop them and get answers. Personally, I’ve always loved it when the heroes start to look like bad guys as no one understands the responsibility and duty that they hold. So we now have X-Force, Hope, and the Uncanny Avengers, all sharing the same book and the writer, Dennis Hopeless, somehow does a good job with each character! There’s a scene when Domino gets stuck in traffic on the highway that I loved! Can’t remember the last time I’ve seen that in a comic. There’s another scene where Forge and Dr. Nemesis have some down time and build a giant mental gorilla and a giant mental scorpion to see who would win in a fight for bragging rights! Just awesome stuff!

So the book has a lot going on with these missions and visions. We have S.W.O.R.D., Deathlok, Uncanny Avengers, Purple Girl, the Raft, and aliens. This felt like it was more of a Marvel Universe book than an X-book. This is pretty typical with most Marvel comics lately.  A lot of teams and solo characters stay in their own realm even though EVERYONE is in New York. You don’t see Ultron fighting the X-Men. You don’t see the Sinister Six fighting the Fantastic Four. You don’t see Wolverine fighting Bullseye. But here we have an X-team, that’s stepping out of its comfort zone, and it works. But even if it did stay within the “X-Men World”, there are a lot of connections to be made.

The team is labeled as mutant terrorist, which at this point is a huge thing. Cyclops’ team in Uncanny X-Men, have all been labeled mutant terrorists and are currently on the run from Commander Maria Hill and S.H.I.E.L.D. In All New X-Men, you have Mystique and Lady Mastermind, posing as the X-Men and committing terrorist acts. The mutant threat is real and a serious issue for the public and S.H.I.E.L.D. There are other connections to some of the other X-books as well. Cable’s father, Cyclops, is running the Uncanny X-Men. In Uncanny X-Force, Bishop, who tried to kill Hope for all entire life, is back in our time now. In X-Men, Madelyne Pryor, Cable’s mother, is alive again. All New X-Men has a young Cyclops and Jean Grey from the past. Uncanny Avengers is run by Havok, Cable’s uncle. Wolverine & The X-Men has Cable’s alternate universe sister, Rachel, as well as a young Apocalypse, Genesis. So there’s a lot that can be done with the series if it had ties more into other books. I would have loved to have Cable and his team go the Jean Grey School For Gifted Youngsters to find Rachel, teen Cyclops, teen Jean Grey, and Genesis. If you didn’t know, Cable hates EVERYTHING Apocalypse, so having a child version of him there makes for good reading! Oh, and the young mutants from Hope’s FIVE LIGHTS are at the school as well. 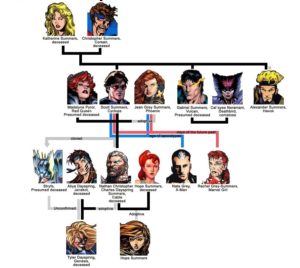 As the book progressed, it never seemed like the team had an actual base as they moved around a lot. One base was compromised and destroyed. Would a mobile base work for a team that’s everywhere or would a stationary base work instead? I would have preferred their base to not be in New York, but maybe Chicago! Boom Boom was added to the team later on; I’m not a fan of the character. There are a lot of characters that aren’t being used right now like: Blink, Darwin, Sage, Warpath, adult Layla Miller, and X-23 that all would have worked in my opinion. What about Derek Morgan from Ultimate X? We’ve never seen the 616 version of him and I personally like the character; there’s some potential there. How about adding Genesis/Even to the team so Cable can train him and keep an eye on him? Later on in the series, Hope goes to the future where she’s confronted by Blaquesmith and Lady Stryfe(future adult Hope). When Battle of the Atom started, and we met two future versions of the X-Men, I wondered if Lady Stryfe was in that timeline as well? Another thing that would have made sense to me was knowing that Cable is dying due to his health, these visions, and not having the techno-organic virus anymore. As Forge and Dr. Nemesis are trying to fix him, why not bring in Nate Grey aka X-Man? If you have a broken version and a perfect new version, why not compare so you can fix the broken version? X-Man would have made perfect sense being brought in, especially since he is nowhere to be seen since the New Mutants series was cancelled. How about bringing in Cable’s pal, Deadpool? An X-Force/Thunderbolts(Code Red) cross over would have been great! Cable and Deadpool have a past as do Domino and Red Hulk (she found out he was General Ross before anyone else). There’s a lot to work with there already, especially since both teams are working behind the scenes causing trouble, it would make sense for them to cross paths.

As mentioned earlier, S.H.I.E.L.D. has been playing a huge role in the current mutant situation. Maria Hill has also designated Dazzler as a mutant liaison between mutants and S.H.I.E.L.D. I have no issue with this, I just would have given her a partner, maybe Darwin. I would have also brought in two Avengers to question Cable, Sunspot and Cannonball, who are both former teammates. There was a part in the series where Cable pairs everyone up and sends them on missions at the same time. At his point, there were a few books being canceled or ending; Red She-Hulk, Gambit, Scarlet Spider, Journey into Mystery: Sif, and others. I would have had a pair from X-Force team up with one of the solo characters from one of the soon to be canceled books. Domino/Colossus and Scarlet Spider. Forge/Dr. Nemesis and Red She-Hulk. Something like that would have been run to read.

Anyways, this was a great series that had so much potential that it didn’t get to reach. I don’t know why this series ended, I can only assume it was due to sales. I was shocked by this book and the writing. If the series had continued but Hopeless and Larroca left, I would have brought in Kelly Sue DeConnick and Marco Checchetto. This is all just a review and my two cents on what I would have done differently. I suggest picking up the trades for a fun read and checking it out for yourself!