The Cosmic portion of the Marvel Universe is infinitely complex (pun most definitely intended).

Though I am not very familiar with the Cosmic goings-on of the Marvel Universe – past or present – I do not know why I picked the Infinity Gauntlet as a subject on which to write an article. To the uninitiated, attempting to comprehend a crossover synopsis of this magnitude is about as easy as surviving “Rainbow Road” on MarioKart 64 w/o using the breaks. As my research soon uncovered, the history of this power-glove is fully ingrained in complex comic-book machinations, time- and reality-bending antics, and cosmic-fueled deus-ex-machina. To the less imaginative or too-grounded these stories may be written off as ‘contrived’ or ‘pithy,’ but to the comic book geek and the suspender of reality these epic cosmic tales are quintessential funny-book material. image:

The Infinity Gauntlet holds a powerfully important place in Marvel U mythos: one that is still prevalent in the modern scope of the comics and one that will only expand if the Marvel Cinematic Universe continues to have as much effect on print publishing as it recently has proven (for better or for worse). It is important to understand the history and significance of such an object because it’s been viewed once (Thor) and hinted at multiple times in the MCU to date, the most obvious being at the end of Thor: The Dark World. Join me, as we uncover the harrowing history of this glorious gauntlet.

The first appearance of the Infinity Gauntlet was among the first pages of the “Infinity Gauntlet” mini-series, issue #1, published in 1991. Jim Starlin – the creative mind behind many cosmic characters (heroes and villains) and much of the cosmic universe – tells a tale wherein the resurrected ‘Mad Titan’ Thanos seeks to woo his love (the female personification of ‘Death’) by killing half of all life in the universe. Recalling the “Infinity Stones” that had signaled his demise at the hands of the Avengers once before, Thanos seeks them out and harnesses the cosmic power of all of them on a single glove forming the Infinity Gauntlet. He then proceeds to destroy half of the life in the universe. This ultimately garners the attention of the Silver Surfer as well as other heroes who rally together and were defeated. The great Council of the highest beings in the Universe tried to intervene but it was only after Thanos ignored the gauntlet, consumed by his own omnipotence that Adam Warlock was able to sneak in and wield the gauntlet himself. Thanos fell and the Infinity Gems were essentially ‘deactivated’ by the Living Tribunal. 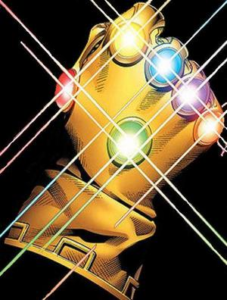 [Infinity War (1992)] The Gauntlet came back into play when Magus – a mentally-unstable past-reality version of Adam Warlock – orchestrated a complex plot to coerce the heroes into using the gauntlet against himself. To do that, they had to activate it. Battling alternate evil versions of themselves, heroes from all teams split up – half remained on earth and half to space to battle the Magus. During a space-battle, Galactus and Gamora (of Guardians of the Galaxy fame) went before the Living Tribunal and eventually convinced them to activate the gems so they could defeat the Magus. The Magus, meanwhile has kidnapped both Warlock and the gauntlet. Doom and Kang ally to help defeat the Magus, but fall when the gauntlet is activated. After the heroes meet an untimely defeat at the hands of the now godlike Magus, Warlock challenges his delinquent half, takes control of the soul gem, and ends up trapping Magus in the spirit-world within.

The gems were transported to the “Ultraverse” [Avengers/Ultraforce #1], and later ended up in the possession of Galactus and, more recently, the first Illuminati of Earth – Iron Man, Xavier, Black Panther, Blackbolt, Dr. Strange, Reed Richards, Namor [Illuminati (2007)].

Richards and the Illuminati tried to destroy the gems, but their plan did not work. As a result, the group disbanded until the demonic gangster The Hood began stealing them in order to once again assemble their full power. [Avengers vol 4 #7-12] A new Illuminati helped the Avengers defeat the power-thirsty Hood. Currently a third iteration of the Illuminati [New Avengers (2013)], introducing X-men’s Beast as well as Captain America, have taken to saving the world from decimation by nether-reality-Earth-bumper-cars. The only way to save 616-Earth is by destroying the encroaching one. Running short on options, they bring the gems together and Steve Rogers wields the Gauntlet once more! However, the Gauntlet is destroyed and all Infinity gems but the time gem are shattered. The Illuminati still face incursions, but the fate of the gems and the gauntlet are now in the hands of, well… editorial. 🙂 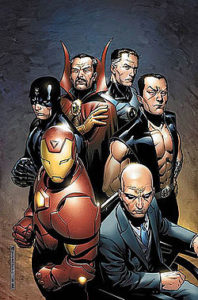 As you can see, the Infinity Gauntlet has a rich and vibrant history full of cosmic shenanigans and super heroic hyperbole! One of the most powerful items w/in the Marvel U to date, its unknown fate has left cosmic devotees on the edge of their seats. Cosmic titles have taken the backseat with JoeyQ-Bendis-Avengers era during the mid-2000’s. However, renewed cosmic enthusiasm has sprung up with the production and soon release of Marvel Entertainment’s “Guardians of the Galaxy.” An ever-consistent cosmic publishing line, backed by considerable talent, is an indication that Marvel

Comics does not intend for their cosmic properties to fizzle out in the background. Forecasting a heightened interest in these Science Fiction space adventures, I believe there is much yet to be seen from the Infinity Gauntlet in future Marvel comic books.

As many of you may realize, with the release of The Guardians of the Galaxy this fall, the Marvel Cinematic Universe has not downplayed the existence and importance of the “Infinity Stones” as they are called. In 2008’s “Thor,” the Infinity Gauntlet can be glimpsed in Odin’s trophy room.

Whether that was a simple nod to fans before the full picture of Phase 2 was put together, the pieces for the assembling of such a gauntlet are now on the table. During the Guardian-centric mid-credits scene of “Thor: the Dark World,” we find that The Collector refers to the cosmic cube (aka Tesseract) as well as Malaketh’s ‘aether’ as “Infinity Stones.” He then cryptically says: “One down, five to go.” (Obviously, he’s a completist.)

Be on the lookout this fall for more sightings (and perhaps even use) of the Infinity Gauntlet or, at very least “Infinity Stones.” With its popularity rising, The Illuminati won’t be the last place we see the Gauntlet!