In our brand new column 616 Things, we will explore various characters in the Marvel Universe. Each column will look at:

-6 Things You Should Know About This Character

-6 Things That Should Happen With This Character

With the new release of the monster movie epic, I think it’s only proper that we start off this “fantastic” new Marvel 616 column by giving 616 Things about Marvel Comics former green goliath, Godzilla! That’s right, Godzilla!

Honestly, not many people remember that in the late 1970’s Marvel had a run of Godzilla comics that were fun yet unfortunately lackluster. Any Godzilla fan knows that great Godzilla stories were always founded on epic battles between the not-so-jolly green giant and his fierce rivals such as Mothra, Gigan, King Ghidorah, and Mecha-Godzilla, just to name a few. However, in the comics produced by Marvel that was the great gap left in the stories themselves. Godzilla was constantly made to face nameless, sometimes downright awkward monsters, that didn’t deliver the same sense of urgency and excitement that his infamous foes demanded. Don’t get me wrong, Marvel did give the fans a couple of gems within the series, but sadly they weren’t stunning enough to keep the series alive more than two years. So while the book was short lived, Godzilla fans are one of the few giant monster movie fandoms to have their character interact with the Marvel Universe. From Godzilla’s interaction with the Fantastic Four, the Avengers, Devil Dinosaur, and even J Jonah Jameson, fans for a short time were able to see a dream crossover come to life; even if 75% of the book was pretty unspectacular.

• While America has come to know his name as Godzilla, his name actually derives from Japan where it is pronounced Gojira, which means “King of the Monsters”.
• The origin of Godzilla has been a mainstay in the series. Godzilla became the monster he is today when, as a dinosaur on a remote island near the shores of Japan, was radiated and mutated during the H-Bomb experiments in the Pacific Ocean.
• Although Godzilla is considered a living weapon and virtually indestructible, Godzilla’s primary method of attack and defense is his atomic breath. Like shooting a stream of thick radioactive fire, Godzilla’s atomic breath has been known to practically disintegrate tanks, buildings, and other monsters.
• Many defense forces have confronted Godzilla throughout giant monster lore; however Marvel’s primary team that worked to capture the giant fire-breathing lizard was called S.H.I.E.L.D.’s Godzilla Squad. The squad consisted of a few select individuals, but led by none other than Dum Dum Dugan.
• One of the most remarkable moments in the Godzilla comics by Marvel, was when in an attempt to more easily capture the beast, Dum Dum Dugan utilizes Hank Pym’s shrinking gas to shrink Godzilla down to the size of a sewer rat! This is the only time in Godzilla’s history that he has ever been shrunk and honestly one of the most enjoyable parts of the series.
• In the final confrontation of the series, the Avengers face Godzilla in a last stand effort to keep the monster from destroying New York City. However, it’s Godzilla’s meeting with The Mighty Thor that steals the show. Godzilla is left unmoved after being violently struck by Thor’s hammer and then stalemates the God of Thunder in a battle of strength. The panels were a fun representation of the phrase, “When an Immoveable Object meets an Unstoppable Force.” 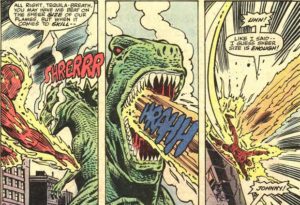 • Even though big is big, Godzilla’s official height has changed multiple times throughout his history. Originally the monster was recorded at 50 meters (164 ft) just as shown in Marvel comics, but in recent decades has changed to 100 meters (328 ft) and 107 meters (350 ft). Comic book and movie lore have reasoned that the change in size was due to further mutation and radiation exposure; however directors and writers have explained that the size difference was necessary to prevent Godzilla from being dwarfed by modern day buildings and sky-scrapers.

6 Things I’d Like To See Happen To This Character

• Without a doubt one of the number one things I’d love to see happen with Godzilla, is for him to come back to Marvel Comics! In comics it can become very difficult to sustain a story when you’re basically limited to giant monsters. That’s why if Marvel was able to regain the rights to Godzilla, I think if done right, could be a great asset and game changer if properly mixed in with other Marvel Comics characters. Marvel’s history with Godzilla shows that if the interaction isn’t done right or frequent enough then the story would eventually fizzle out.
• New Twists with a Godzilla story! Please, please, please, someone at Marvel get the rights to Godzilla and do something other than have a group of people run around and watch Godzilla fight! No more telepaths and twin fairies ridding on bugs telling me how Godzilla “feels” while we build more giant robots to fight the monster that fights the other monster! Find a way to make this story relatable, captivating, and intelligent. If Marvel can do it with the Hulk, they can find a way to do it with Godzilla.
• This may be similar to the second point, but I’m going to say it anyways; revamp the Godzilla series completely. While I’d love to see new stories with Godzilla, I also think it would be even more beneficial for the character to have a completely new take with a whole new direction. Please understand, I’m a purist and I hate change to my character’s origins, but if a character stagnates for too long then they will eventually disappear altogether. A revamp like this would be perfect for someone like Matt Frank, who is a diehard Godzilla fan and writer.
• Marvel vs. Godzilla! Oh boy, would that be great to see! We got a small taste at the tail end of the 1970’s Godzilla comic, but the interaction was sadly limited to a handful of issues. Similar to the Hulk, it’s nearly impossible to stop Godzilla and it would take either a serious opponent or a great plot to give the big guy a run for his money! It is way too easy to suggest that the Skrulls capture Godzilla and use him against the Avengers, but I’d love to see a serious battle between Godzilla and the Giant-Size Man-Thing or even versus Ultron! Could the radioactive rex really beat the seemingly unbeatable Ultron? There are tons of possibilities that Marvel has never explored.
• A smarter Godzilla! The entire big reptile’s life he has been a radiation hungry or territorial brute, smashing through cities, and coincidentally beating the “bad” monster to a burning pulp! So I’d appreciate a Godzilla 2.0. One that was far more intelligent and emotionally connected to the stories that are presented to the reader. Think of how scary that would be to have a creature that size and that powerful, who strategizes and thinks! The potential to be the world’s most powerful ally or the most feared nightmare would constantly loom.
• Lastly, and this could merge with point 1 and 4, I would want the Godzilla universe as a whole to make its way into Marvel Comics. Meaning I’d not want just Godzilla making the move back, but Monster Island’s entire populous! Since the beginning of superhero comics giant monster fights have been at the very foundation in comic history. Nowadays, giant monster fights have become more of a rarity and in most cases can seem cheesy, but honestly with the roster of baddies that Godzilla would bring with him I believe that comic fans in the Marvel universe would enjoy the colossal battles created from the merge. The bottom line is that if giant monsters are a mainstay in comics, I figure that these monsters might as well be the best and fight the best! 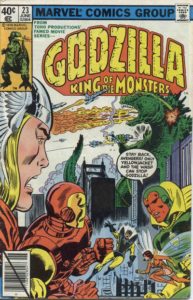 And that my friends are 616 Things about Marvel Comics’ old buddy, Godzilla!