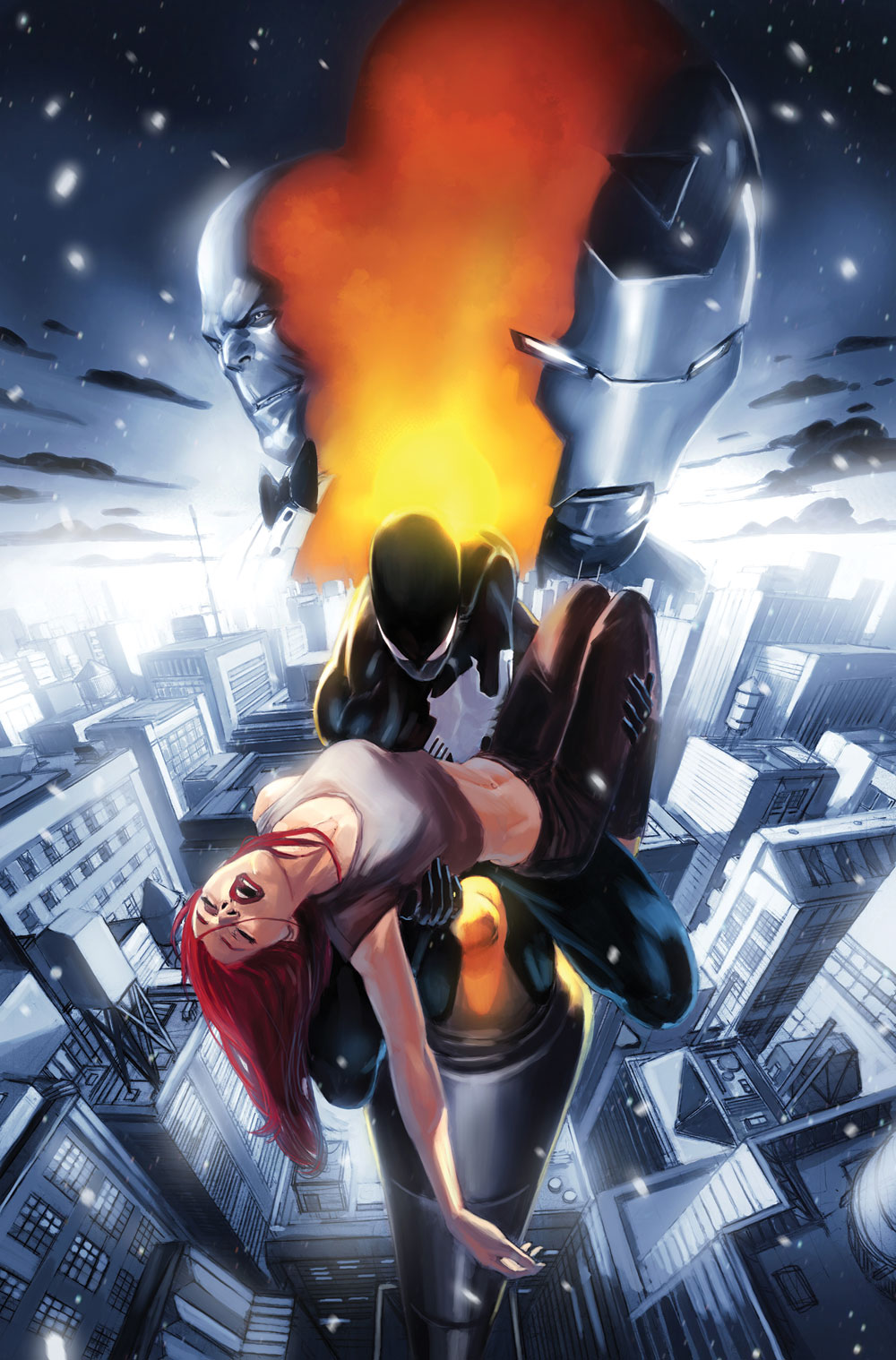 Today I wanted to take a look at Spider-Man: One More Day. This is a story written by Joe Michael Straczynski and illustrated by Joe Quesada. The background to this story was that Quesada, Marvel’s Editor-in-Chief, felt that Peter Parker/Spider-Man was aging and he wanted to make Peter and the Spider-Man books feel “younger.” Now in order to do this, he requested JMS to write off the marriage between Peter and Mary Jane. JMS made a deal that if he did in fact write it, his contract on Spider-Man would end as he didn’t want to continue the story. Crazy huh? Peter Parker and Mary Jane had been married for decades at this point. Mary Jane was always a strong supporting cast member in the Spider-Man mythos and we, the readers, all got used to it and enjoyed it. So taking away Mary Jane, or more specifically their marriage, got a lot of public attention.

At this point, Civil War had recently ended so Peter, MJ, and Aunt May were on the run and hiding. Why? Well during Civil War, Peter was Iron Man’s poster boy for the Avengers Initiative Program and used to enforce the Super Hero Registration Act to where all masked heroes had to register. Peter, viewing Tony as a father/big brother figure, was very supportive of the SHRA even to the point where Tony had Spider-Man publicly unmask himself. This wasn’t an issue for Peter as Stark had let MJ and Aunt May move into Avengers Tower and Tony even created a new spider armor suit for Peter. So with heroes again heroes and those refusing to register being captured by Iron Man and placed in a prison in the Negative Zone, Peter had a change of heart and realized he was being used. Peter switched sides to ally himself with Captain America, who was against the SHRA and led a team of rebellious Avengers. 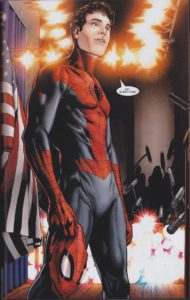 After Civil War, (and Peter being in a darker frame of mind) he put on his classic black costume. MJ and Aunt May were hiding in a hotel while Peter was out and about helping the New Avengers led by Luke Cage. With his secret identity still out there, Wilson Fisk the Kingpin, saw this as an opportunity to end his enemy once and for all so he assigned an assassin to kill him. The assassin was aiming a sniper rifle at Peter when he moved and the bullet hit Aunt May in the torso. This caused Peter to lose it as he went on a vendetta against the Kingpin taking it as far as breaking into a prison to physically beat him up. (This takes place during the story arc “Back in Black.”) 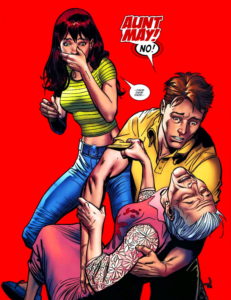 As we enter “One More Day,” Peter rushes Aunt May to a hospital to try and save her. Remaining in critical condition, Peter confronts Iron Man blaming him for the entire situation. He asks Doctor Strange, Black Panther & Storm, Dr. Doom, and a variety of others for help in saving his aunt. With no luck, Peter and MJ are confronted by Mephisto who offers to save Aunt May if Peter and MJ are willing to sacrifice their happy marriage. Peter eventually agrees as the marriage is erased and Aunt May lives. We’re told as readers that Peter and MJ had still been together in all of the books we’ve read over the decades but they were never married and they are currently no longer together.

For anyone who’s a big Spider-Man fan, having Peter make a deal with the devil and sacrificing his marriage just seems out of character and forced. Throughout the story Mephisto was disguised as a young girl and at times a woman. After the deal was made, Mephisto told the couple that the girl/woman was a vision of their child to come who will now no longer be. 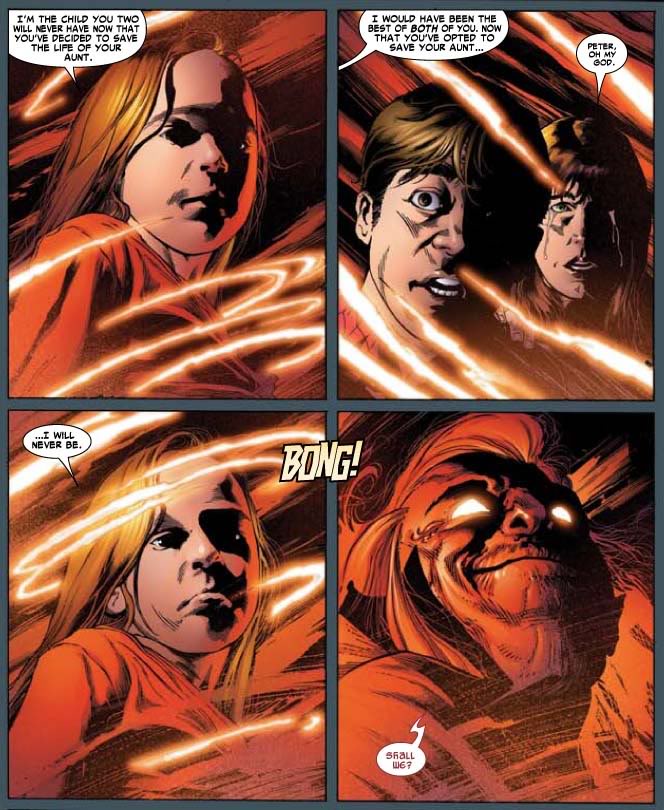 What if the story wasn’t forced by editorial?

Between Back in Black and One More Day, Peter changes costumes from black to his original blue/red. Quesada stated this was how he wanted to draw Spider-Man. To me, that’s rough story telling – let’s keep Peter in the black costume. One big factor that’s left out of this story is the New Avengers. Doctor Strange was brought in but why he couldn’t help still confuses me. How about the rest of the team? The New Avengers at the time consisted of Luke Cage, Doctor Strange, Ronin(Clint Barton), Echo, Wolverine, Iron Fist, and Spider-Woman(Princess Veranke). Peter didn’t rely on his team at all during this story but if he did I think the results of saving Aunt May would have been a lot better. Danny Rand/Iron Fist, a billionaire that owns his own company can easily afford to buy all of the medical equipment needed to help Aunt May. If Doctor Strange’s magic can’t help, why can’t his girlfriend at the time, Night Nurse provide assistance?  Wolverine, who was a New Avenger and an X-Men, could have brought in Elixir to heal Aunt May? There could have been a lot of different ways to go about this. 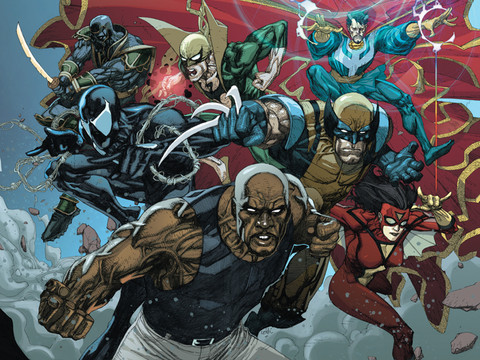 I don’t think Peter would have ever made a deal with the devil. Losing his Aunt May would have been horrible but she was close to death anyways due to old age. If the issue of Spider-Man aging was the real concern, how does making him single fix that? What’s wrong with a character progressing? As readers we want to go through life with our heroes. Peter graduated high school, graduated college, married Mary Jane, quit taking pictures, and became a teacher; that’s progression. The next move would have been killing off Aunt May as I believe she’s not a good supporting cast member and having Peter and MJ have a family. A move in the right direction is having Spider-Man be a full time Avenger. Luke Cage and Jessica Jones have a baby as do Reed and Sue Richards. I doubt any of us feel like the characters are old and outdated. Progress in a comic should take time but it should eventually happen. 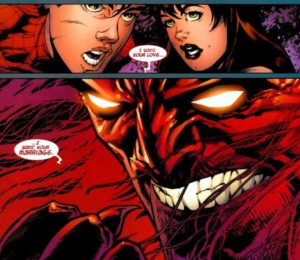 In my personal opinion, when offered to sacrifice his marriage for his wife in order to save his dying Aunt May, the Peter Parker/Spider-Man I know would have punched Mephisto in the face! Then he would have asked Loki for the favor still owed him and spiritually said goodbye to his aunt unlike how he was never able to say goodbye to his uncle or parents. 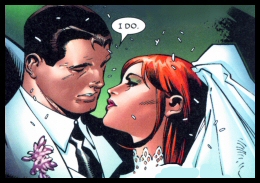 Those are just my thoughts on the concept and my overall two cents. If you enjoyed my article and want more, comment below! Until next time!