This week on 616 Interviews I had a rare chance to sit down with our very own white knight, Moon Knight. This reclusive vigilante takes on the visage of the Egyptian god Khonshu to fight crime. I was hoping to discuss his hopes, dreams, and mental state, but we became side tracked by other topics.

Marvel 616 Politics: Thank you, Moon Knight, for agreeing to talk with us today.

M6P: Spider-Man, there are some who believe you may be too mentally unstable to be a reliable hero. Are the allegations that you have dissociative identity disorder true?

MK: We don’t know what you mean.

M6P: Okay. A lot of people say you are just a knock-off Batman. What’s your response to those people, Spider-Man?

MK: I’d probably just cut their face off. Does that sound like what Batman would say?

M6P: Speaking of cutting off faces, Spider-Man, a lot of your critics say that you often dish out your own brand of far too harsh justice which can sometimes even appear to be torturous.

MK: Well, when they get raped and murdered by some scumbag who doesn’t care about their well-being I wanna see if they care how many bones it takes me to break to make sure that punk never does it again.

M6P: And that’s going to be all for today. I’d like to thank Spider-Man for joining us. If I’m still alive I will see you next time on 616 Interviews. 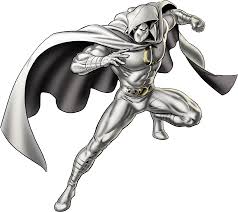