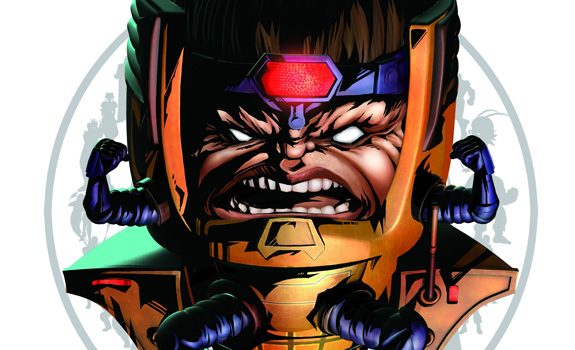 Recently there have been rumors that everyone’s favorite floating head (unless you’re a big Pee Wee’s Playhouse fan) is going to be in the next Captain America movie. That’s correct, the latest rumor is that MODOK will be appearing in the 3rd Captain America movie. Not only is this most likely false and far too early to speculate, but this is also an incredibly poor decision. That doesn’t mean that he should be nixed from the Marvel Cinematic Universe altogether though.

There is a good chance that if anything has been written yet for the next Captain America movie it is little more than a synopsis or a rough outline of where the character starts and where the character is at the end of the film. The movie’s tentative release date isn’t until May 6th, 2016. Marvel has done of good job of sticking relatively close to their dates, and they even stared down DC’s Superman vs Batman for this release date. And you may say, “Well, the DC’s potential disaster flick has already started filming, so why would you say Cap isn’t that far along?” Well random internet person, Marvel knows what is going on whereas DC is trying to play catch up and I have a feeling are clueless on how to properly handle their properties (which means rewrites, reshoots, and lots of time). DC is also going to throw all their tricks into one gigantic movie, and that means a large post-production process with mountains of CGI. Captain America, although it will have its fair share, won’t even come close to the level of post-production and CGI as DC’s film. So that’s why I think that it is far too early to say MODOK will be in the film, because I doubt the writers even know if he’ll be in the film. So the rumor is most likely false and it is far too speculate.

But the rumor (if it turns out to be true) would be a horrible choice. “Why,” you ask? Well random internet person, this isn’t a dialogue so please stop interrupting me and let me get to the point. The two previous Captain America films, although still being superhero films, we fairly grounded in reality. True the Tesseract (wasn’t that the bad thing in A Wrinkle In Time? Yes, I’ve read something other than comics) gave the first film a science fiction feel, and Armin Zola in the second was the best possible take on an absurd comic character. But even Armin Zola in the second film was a somewhat awkward scene in a grounded and taut political thriller. They have done their best with the second Captain America film to set the tone for Cap’s solo modern stories, and that same creative team is going to be at the helm again. So if we have a realistic film (albeit for the superhero genre) and then a floating head with arms and legs designed only for killing pops in the picture it is going to feel extremely weird. So much so that although you may be excited to see this character with a strong cult following it may jerk you out of the movie to see such a ridiculous spectacle in such a film. They could use him, but I have a feeling he would end up being so butchered and repurposed for the film that like extremis or the Mandarin (I know it wasn’t the real Mandarin and he may be in a future film) in Iron Man 3 it will be more of a complaint than a moment enjoyed.

I will say that I think MODOK should be in a film though. It would be great to see him come to life, but out of all the movies so far, and out of all the potential properties so far mentions, MODOK only has one clear choice to be entered into the Cinematic Universe: Guardians of the Galaxy. GotG already established an over the top and fantastical sci-fi approach to the film so much that all the weird and crazy things that appeared in the movie (including the betting on animals killing each other?) seemed to fit and didn’t detract from the film at all. They in fact added to the film and helped build a new grand corner of the MCU. With that in mind, to have MODOK done correctly on film (but with a possible origin change) one of the future Guardians’ sequels will need to bring him to life. Captain America, Thor, and even Iron Man at their most basic levels are still too serious of movies to contain the MODOK character, and semi-serious realm of the Guardians could properly house the character in such a way that regular movie audiences would buy this ridiculous but lovable character.

Yes, I just called MODOK lovable. Deal with it.