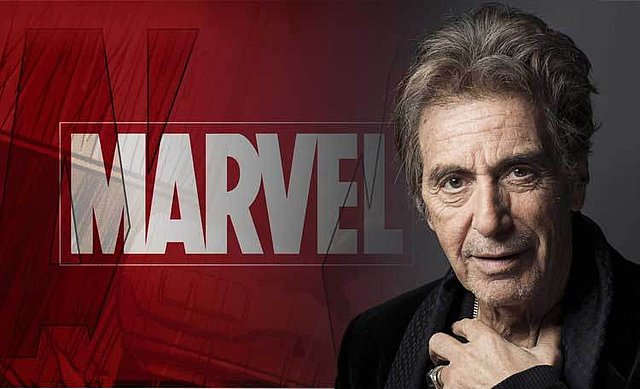 With the recent news that Al Pacino loved (LOVED) Guardians of the Galaxy (who didn’t?!?!) he also revealed that he would love to take part in a Marvel Movie. Now, unless you’re Amish or part of the terrorist Islamic sect of ISIS, this is a pretty sweet idea. Truthfully even ISIS terrorists enjoy the Godfather trilogy and Amish kids on Rumspringa will admit to loving Scarface. Because of this I’m going to do a twist on the IIWAMs today and only cast Al Pacino in comic character roles!

J Jonah Jameson – Al Pacino
This is a no brainer. Although it is technically a Sony Pictures’ franchise and not really part of the Marvel Cinematic Universe, Al Pacino is one of the few people who could possibly take over this role and make you not miss J.K. Simmons. Let’s be honest, Simmons’ Jameson deserved far more screen time that what he got.

Jigsaw – Al Pacino
He may seem too old, but I think he’d be perfect. The guy who played the character in War Zone was on the right track; he just made it too cartoony. He was trying too hard to do a bad Al Pacino impression. That ended up being the worst thing about the film, and made it almost unwatchable (that and the obvious Joker rip-off reveal and doctor killing sequence). If you had an actor in that role with the caliber of Al Pacino who was able to pull back on the crazy and give the character anger and rage instead it may have actually been an extremely watchable film.

Hammerhead – Al Pacino
This, like Jigsaw, is a bit of type casting, and again this character is most likely owned by Sony Pictures, but possibly could work in Netflix’s Defenders series. An actor like Al Pacino doesn’t get type-casted too much due to his talent, but this might be a role that would be perfect for him. He could also do Silvermane, but I’m going to stop with this character on casting Al Pacino as a gangster. He deserves more than that.

Mephisto – Al Pacino
This is another role I am basing purely off one of his past performances: The Devil’s Advocate. If you haven’t seen that movie his acting is so great he actually makes Keanu Reeves look good, and apart from his acting it is a chilling and well written movie. But because of his role in that film I’ve always been interested in seeing him in more horror roles, and what better monster than Marvel’s own version of the devil? With the upcoming Doctor Strange movie it is even reasonable to assume that Mephisto may show up, unless he is owned somehow by Fox in the Doctor Doom/Silver Surfer part of their character rights.

Nick Fury – Al Pacino
Yeah, they’ve established Nick Fury is black in the films, but with the introduction of the black Nick Fury to the 616, why not white Nick Fury to the cinematic universe? (And then they can introduce a Mexican Nick Fury to the Ultimate universe, and an Asian Nick Fury in DC’s Earth 2 comic.) I’m not saying Al Pacino should take over for Mr. Jackson, but maybe they could introduce Nick Fury Sr. and have Al Pacino yell at his son for not treating Captain America with more respect. It would instantly become a classic scene to have two of the angriest (and foul mouthed) men in movies banter back in forth for a bit.

William Burnside – Al Pacino
I went back and forth of whether to put William Burnside or Jeffery Mace, but I think William Burnside may fit into the Captain America movies a little better. If you don’t know who that is then you didn’t bother reading my The Men Behind The Shield article from a few months ago. Both men at different points picked up the Captain America mantle (Mace during WWII and Burnside during Korea). Burnside went a little nutty though thanks to the super soldier serum he was given (or gave himself). While he was a villain in a short arc back in the early 70s, I think bringing him back in as less a villain and more of the bitter and angry former Cap and a key piece in figuring out how to turn Bucky from the Winter Soldier would be a fun nod to the fans. 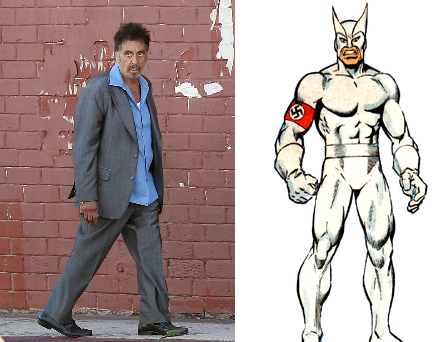 The Magus – Al Pacino
This is my final pick for Al Pacino. I’m sorry to him if he’s ever so bored that he finds this and wonders why I keep casting him in villain or darker heroic roles, but he’s so much fun to watch playing those characters. He plays them better than almost anyone (maybe not Gary Oldman, but close). The Magus is the future insane version of Adam Warlock. There are pictures of him (especially Infinity War 6 cover) that I could see Al Pacino (even with his age) perfectly filling. It would probably be a stretch to see him in a role like that, and I’m not sure I’d want to see him as Adam Warlock though.