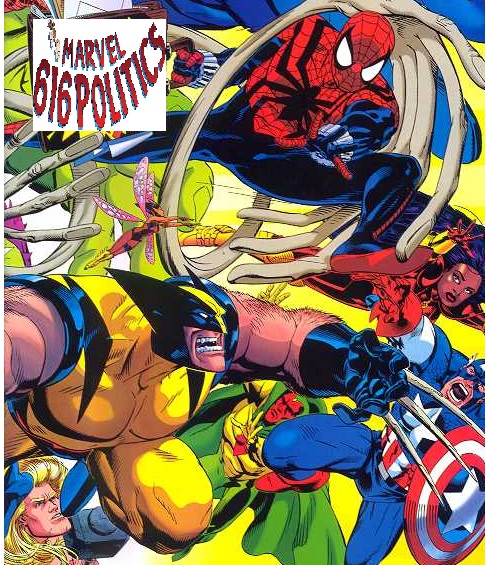 While some of the older comic book readers are well aware of the collection boom of the mid 90’s, some people may not on the whole be entirely aware of what it was, or if they are aware, may not understand the full impact of the era.

This is really the start of the nostalgia businesses picking up steam; that was the whole idea of the collection boom. The wealth of the 80’s allowed for individuals to go back and pick up relics from either their childhood or their parent’s childhood and due to the booming economy this was an available option. I’ll refrain from positing on the politics of what potentially created that economic boom, because there is just as controversial political positing that this time period is what led to the recent economic implosion. I read comics and it turns out I am not a leading mind in the field of economics. 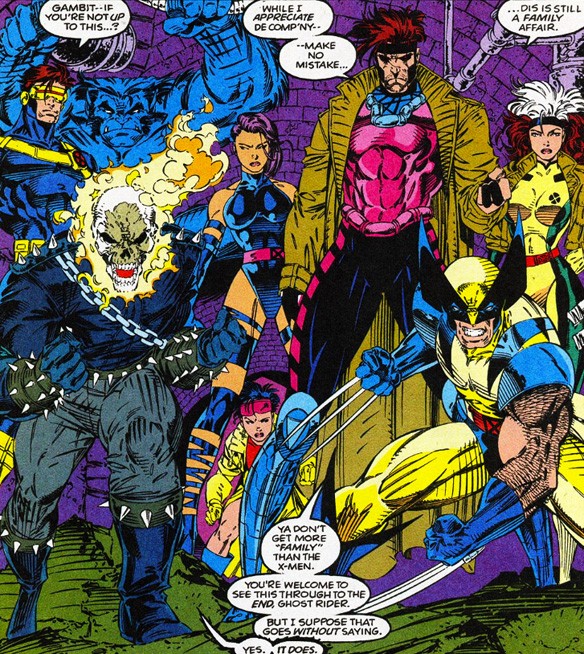 However, the collection boom was a real thing. Anyone who has ever tried to sell their Jim Lee X-Men comics knows this. Market saturation from this collection boom created devalued assists. It’s the basic principle of economics which even I remember from my C average in Econ 101 (in my defense, it was an 8AMclass and I was/am lazy).

To prove it is a real thing, below is a graph of Amazing Spider-Man sales for 40 years. 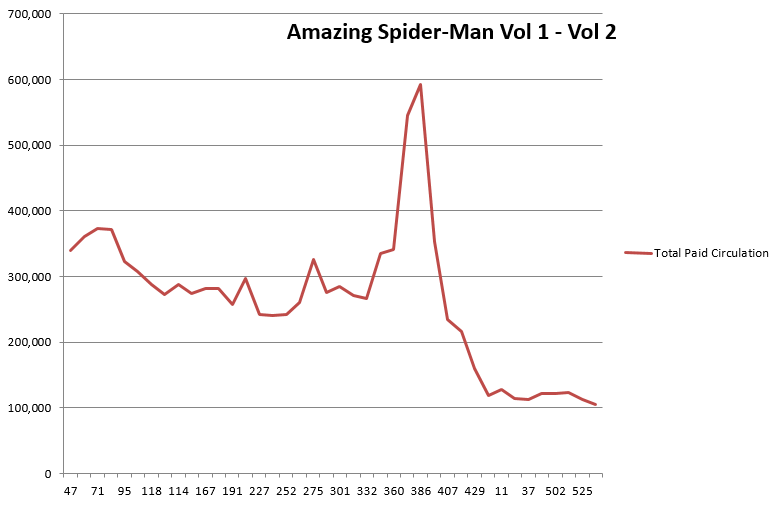 If you want even more dramatic data here are the X-Men sales for the two core titles. I was able to find the average monthly sales for five years prior to 1991, the sales for 1991’s X-Men #1, and then starting around the time of the Age of Apocalypse in 1995 sales to the present. Here is that chart: 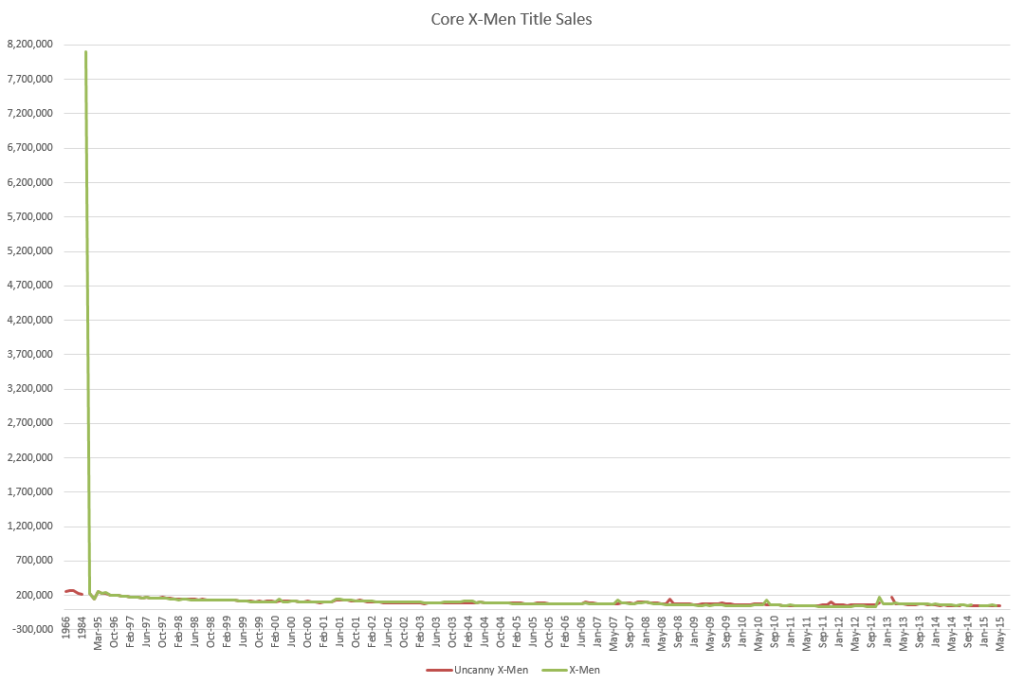 Can you make it out? See that one huge spike in green and then the predominately flat green and red lines? That’s the sales of X-Men #1 compared to the other sales. To put that spike in comparison, the total cumulative sales for both Uncanny X-Men and X-Men from January 1995 to January 1998 equal that spike. The sale of one issue in 1991 equals the sale of forty-four issues four years later; that’s a boom and a bust. Maybe a better way to show just the decline in sales is to take out the huge explosion of the early 90’s in this chart: 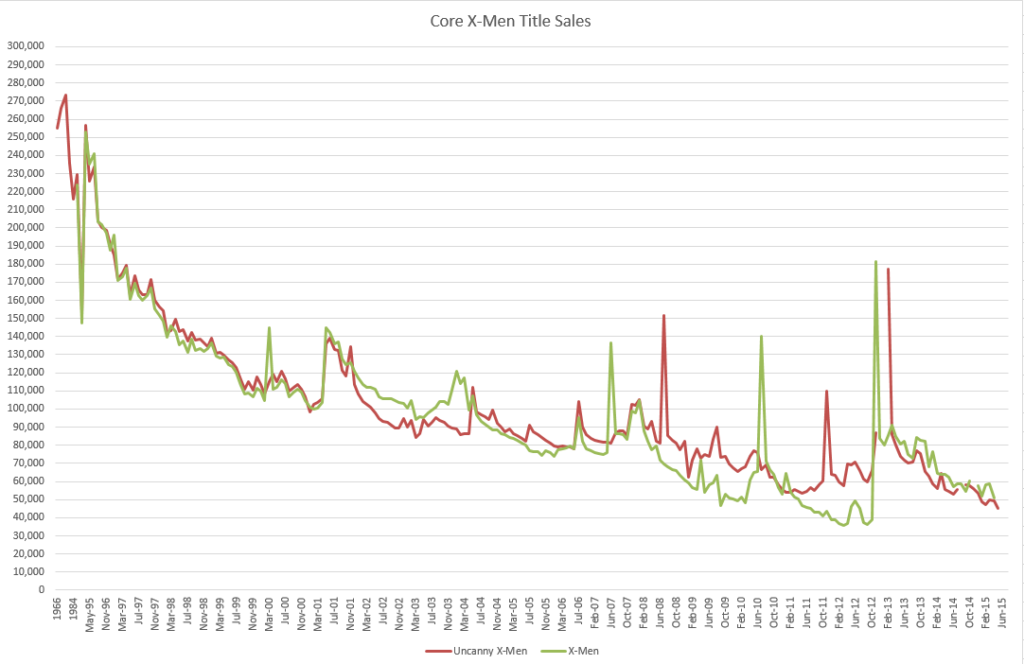 What the above chart shows is the downward sales trend. The upticks almost unanimously represent new number one issues or a centennial issue. The large up trend in the X-Men green line starting in 2013 is me considering All-New X-Men to be more a continuation of the adjectiveless X-Men title in terms of being one of the core books than the all-female team book (not knocking the quality of that series, just that it wasn’t a core title). Apart from a few spikes – the trend is a downturn. There is no doubt about it and that chart is calculated using every single issues’ sales stats from Diamond since January 1995. This chart shows twenty years of data starting at the burst of the collection bubble. 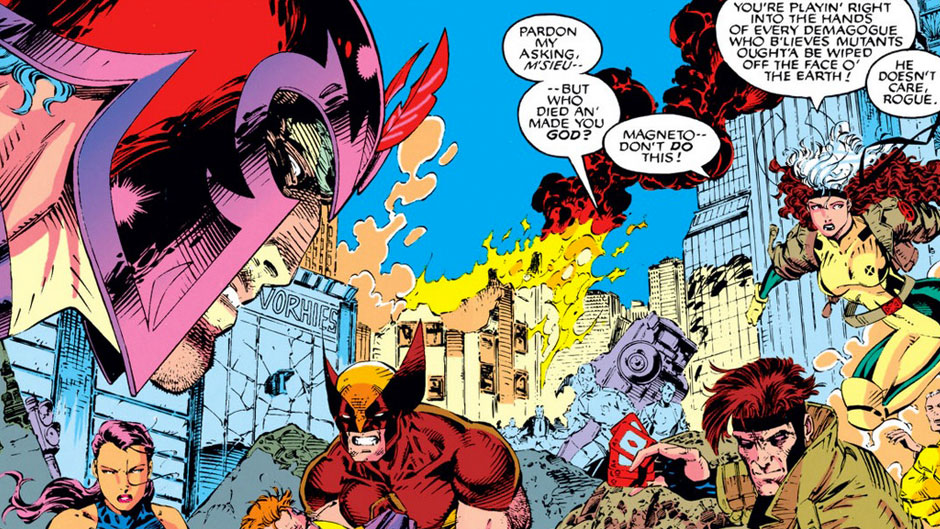 Looking at all of the stats together and compared to other top comics, it should also be noted that it wasn’t until August 2002 that either of the X-Men titles were out of the top ten issues sold. Apart from the tail end of the X-Men: Legacy series, they were almost always solidly in the top twenty issues sold. Based on this and the other data I reviewed, this is a fair representation of industry standards: downward trends with upticks on new number ones.

The reason for this explosion in sales is surprisingly silly now, but at the time people thought they were investing their money. Around this time people started buying old collections and a few made a lot of money selling their collection of both Golden Age and Silver Age comics. Along with comics, baseball cards, dolls, and other toys all exploded in value, and this is also the period of the Beanie Baby craze. In truth, it is similar to the 1800’s Western America gold rush; few people made a lot of money, and then tons of people jumped in and thought they’d also make their easy fortunes. Basically everyone thought these things were a wise investment like gold or real-estate. With market trends showing a rise in sales, the comic book companies started to saturate the market with more copies of issues. 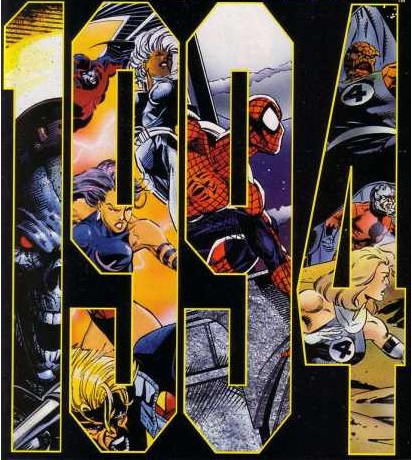 Printing didn’t quite keep up with market trends, so there are certain late 80’s and early 90’s issues that actually have a high value to this day (McFarlane’s run on Amazing Spider-Man for example). However, issues that came out towards the end of 1994 are hard to give away because everyone has them. The epitome of these types of issues are classically X-Men #1 and X-Force #1, still two of the highest selling single issues of all time, and released right at the start of the boom in 1991.

Unless these issues are CGC 10.0 and signed by the writer and artist, chances are you won’t be getting any money for these issues. This doesn’t mean they’re bad (they’re fantastic reads) it just means they aren’t worth anything because you can find them anywhere.

The thing which I was unable to determine in my research was the true effect of these sales. While sales dipped for Marvel, the increase in purchases were due to an increase in purchases from comic book retailers. Were those comics sold? Did the boom and bust detrimentally effect comic book stores and other retailers? That’s your homework, kiddos! Go ask your LCS about whether or not the decline in sales and backlog of unsold comics potentially made them close their doors. Go ahead and buy something while you’re there. 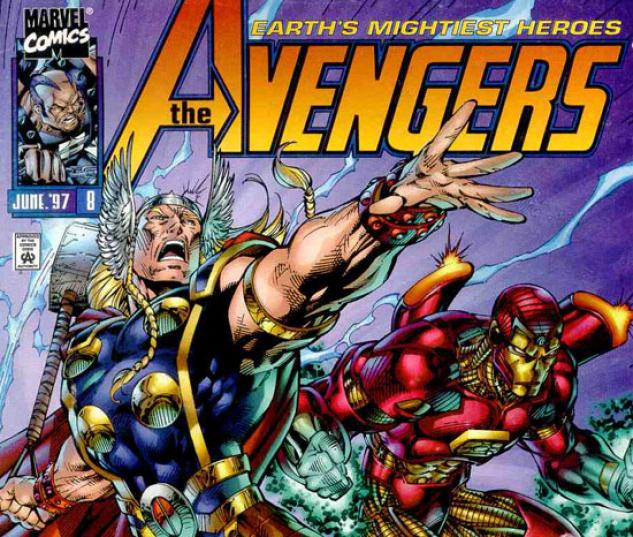 By 1996, sales were sliding downward thanks in part to people trying to flip the comics they bought and finding they were worthless. At this point in time the Onslaught saga came in and Marvel tried to reboot their truly slacking lines of comics (Iron Man, Avengers, and Fantastic Four) with all-star creators. That gimmick worked for about one issue, which I think is still in part thanks to the continual relaunches that Marvel continues. As an overall trend, sales are continuing downward, but even if just for a single issue, that uptick in sales helps the Marvel’s profits.