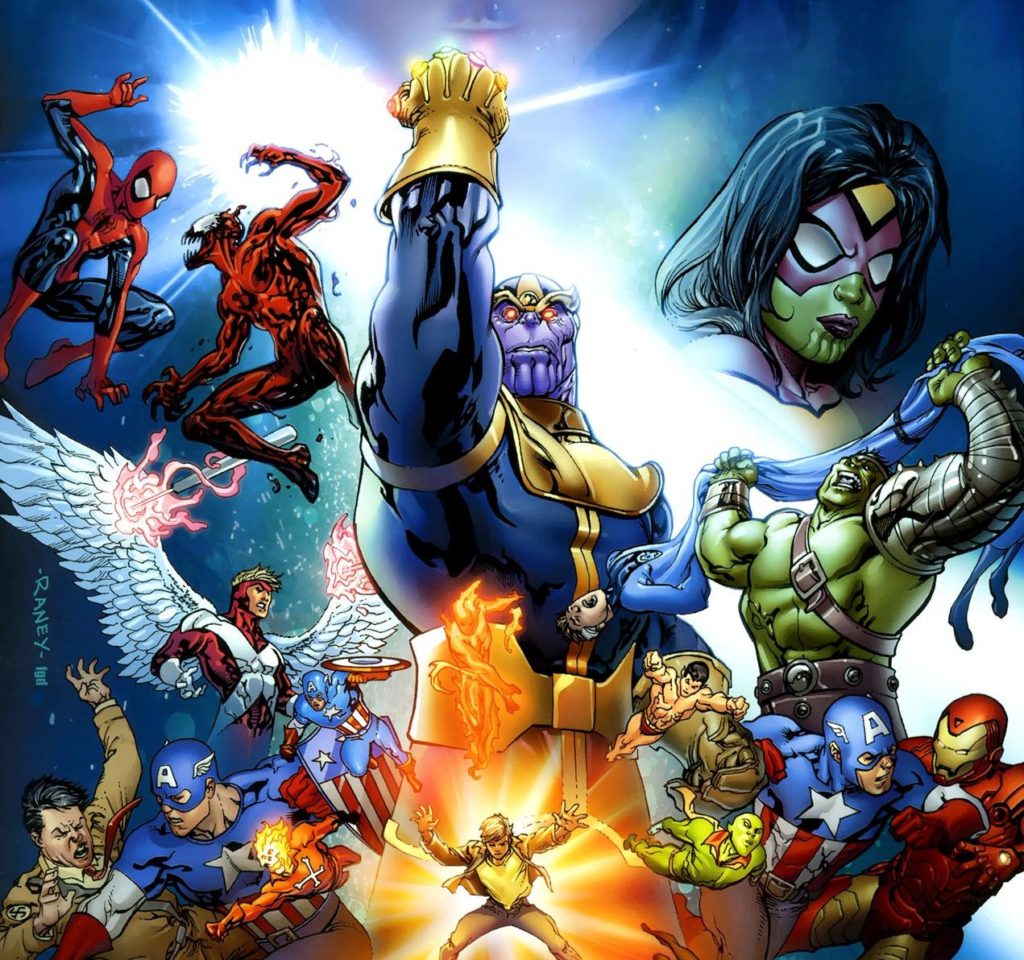 Event fatigue; it’s a phrase thrown around the Internet often to represent how sick fans are of events. The entire point of a series now feels predominately to build to the next event, and there is a vocal fan base who lets it be known of their disappointment. Is this the vocal majority or a vocal minority? Do sales trends back up the disdain present for events or do they support the comic industry shoving them down our throats twice a year.

To answer this question, I grabbed the sales figures for all event issue sales from 2004’s Secret War through issue 6 of the current on-going Secret Wars (don’t let the plural/singular throw you). Secret War may not be officially considered an event, but in many ways it feels like one (especially considering it took two years to get five issues; seems history is repeating itself in a current on-going event series).

From that data I created a chart to look comparatively at sales of each series:

It’s a lot of data, so I’m sorry if it too jumbled and confusing for you to get a clear view. One thing is evidently clear, sales dip after the first issue, but stay fairly consistent for the remainder of the event. Looking at the data, apart from the very bottom of issues (Chaos Wars and the cosmic events) most all of these issues landed in the top ten if not top five issues sold for the month even when more than one issue was released. These rankings include the period of time when DC launched the New 52 which garnered them record sales.

The dip from the first to the second made me wonder if there was a statistical trend on these series that Marvel comics knows ahead of time going in to the new event. 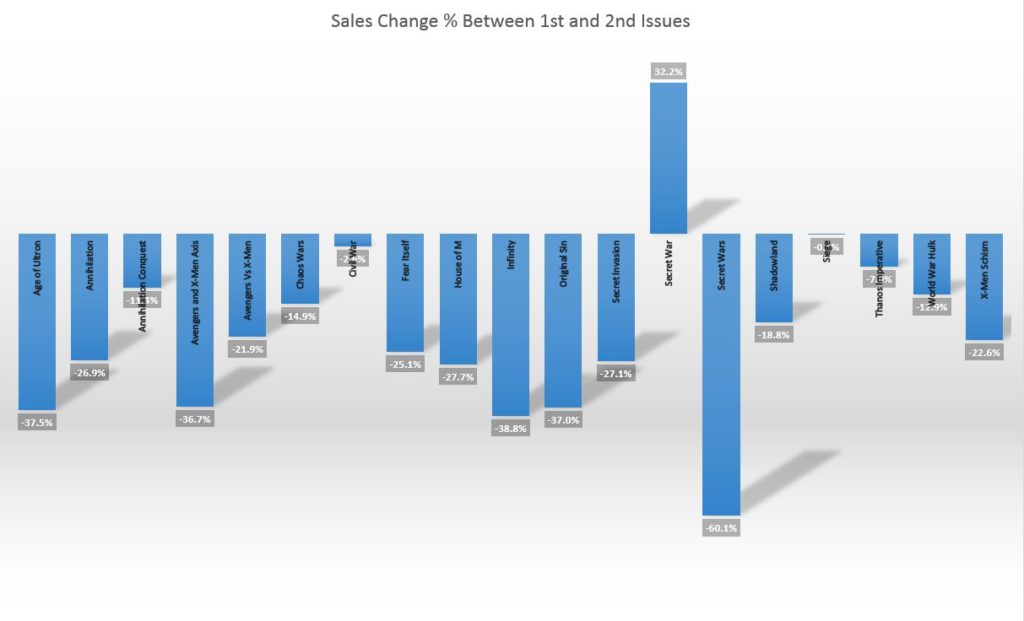 There is a trend, and it is a 20.9% decrease in sales from issue one to issue two. Siege and Civil War were the most consistently performing events put out by Marvel given that the average sales shift between issues after issue two for event comics is a 1.6% decrease. If you’re wondering about the two extremes on this chart (Secret War and Secret Wars), when those are removed the sales decrease on average is still 21.7%, which falls in line perfectly with Avengers Vs X-Men which (across the numbers and reviews) is about as average of an event as you can expect. The data partially supports the idea of new renumbering. If you accept a gradual decrease in sales no matter what, then that boost in sales (which from this data could be around 20%) is very desirable.

While all that data is great, what is the actual historic trend of these series appear to be? 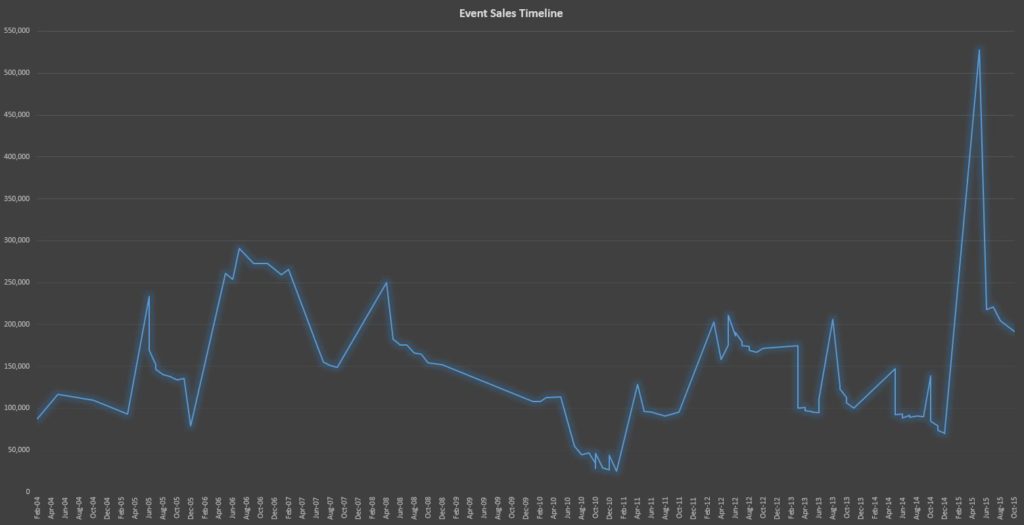 While there does appear to be a dip in the middle (that is Chaos Wars, the worst event on every level by Marvel), the large spike at the end is Secret Wars #1. While this looks like the EKG of a human that is definitely about to die, the trend of all of this data is eerily consistent. By that I mean, the actual sales (that is number of issues sold) has stayed fairly level. With the price of comics increasing, that only means that sales revenue has increased for Marvel when it comes to events.

Lastly, I looked at the actual performance in total of the series. Since certain series had more issues than others, I looked at both total issues sold per series and average issues sold. 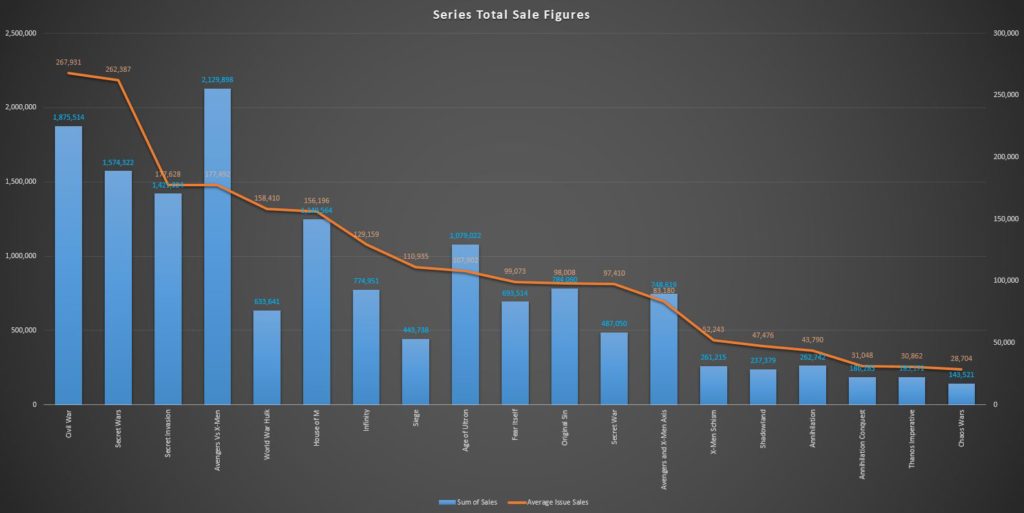 The data is arranged from highest sales on average per issue to least, which just happens to be from Civil War (the best) to Chaos Wars (the worst). In terms of quality events, this no longer just an opinion; the numbers don’t lie. If you look at the series that average 100k per issue, those are some extremely strong sales figures. Even series like Original Sin and Age of Ultron, which are often panned by vocal fans fall close to that number. Apart from Axis and Chaos Wars, most line-wide events have strong sales.

I’m sorry to say it, but you are one of those crying event fatigue, it may just be you because the numbers are telling a different story. The market likes events, just like the market likes number one issues (which maybe I’ll do an article on). They sell too well to be going away anytime soon, so all we can hope for is more at least as good as Siege and not as bad as Axis. 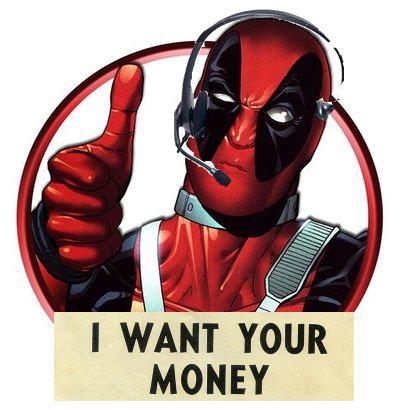