Buenos Dias Body Politic! a few months ago I humored you with hypotheses on how the X-Men franchise might have looked a bit different if the “Outback Era” X-Men team hadn’t gone through the Siege Perilous into different lives between issues 250 and 251 of Uncanny X-Men. As a few of the more astute among you pointed out to me, however, this wasn’t just the era during which the X-Franchise blossomed into its own. While the X-Men were falling apart and growing on divergent paths the rest of the Marvel Universe (and a few X-Men too) were busy coping with the fallout of Inferno and the antagonistic assault of the Acts of Vengeance. 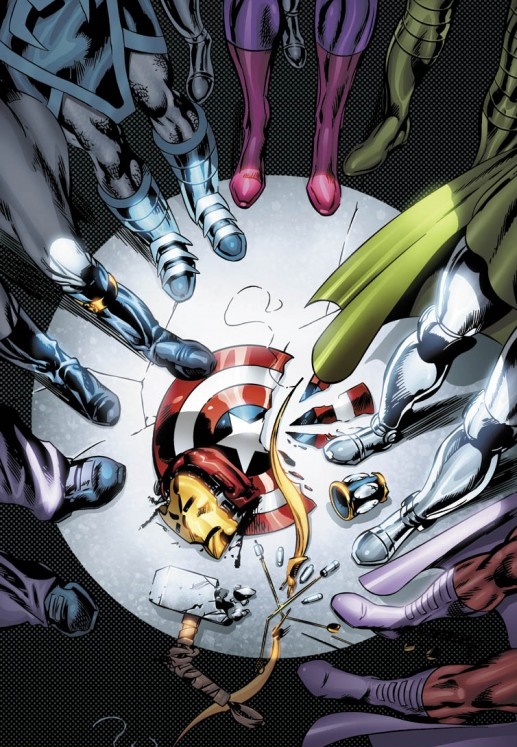 Not familiar with Acts of Vengeance? No worries! We’ll catch you up before Quicksilver can blink! It all started when that talkative trickster Loki convinced a pack of villainous masterminds, the so-called “Prime Movers” to set aside their differences, pool their resources and change dance partners to throw those hero-types off their game and defeat all those annoying, scheme-foiling do-gooders once and for all. Readers who are familiar with the back-story of the Old Man Logan character may be familiar with the idea of a world where this diabolical scheme paid off (and if you’re not what are you waiting for?).

What kind of a principal writer would I be here at M6P if I didn’t ponder the poignant practicality of pursuance produced by my previous pitch? Granted the X-Men, X-Factor, Excalibur, and the New Mutants did not play a tremendous role, nor were they tremendously impacted by the Acts of Vengeance story (Psylocke being the notable exception). However, some of the other characters that featured prominently on the alternative X-teams in ‘What-If . . . the Outback X-Men never entered the Siege Perilous?’played an EXTREMELY important role in AoV (can we call it AoV going forward? I think that’ll save us time and eye-strain, right): Spider-Man and Magneto.

During AoV Peter Parker was possessed by the Uni-Power that turns mere mortals into the cosmically powered Captain Universe. Basically, Spidey spent most of the AoV event as a web-faced match for the Silver Surfer. As events shook out, it wasn’t the Avengers who spent much of the storyline on the ropes, but rather this souped-up Spidey who was instrumental in defeating many of the most dangerous among the Prime Movers’ agents. In a scenario where Spider-Man isn’t in New York, but laying low in Asia with Wolverine his new mentor things are suddenly more in the Prime Movers favor. Things are looking bad for the Marvel U. 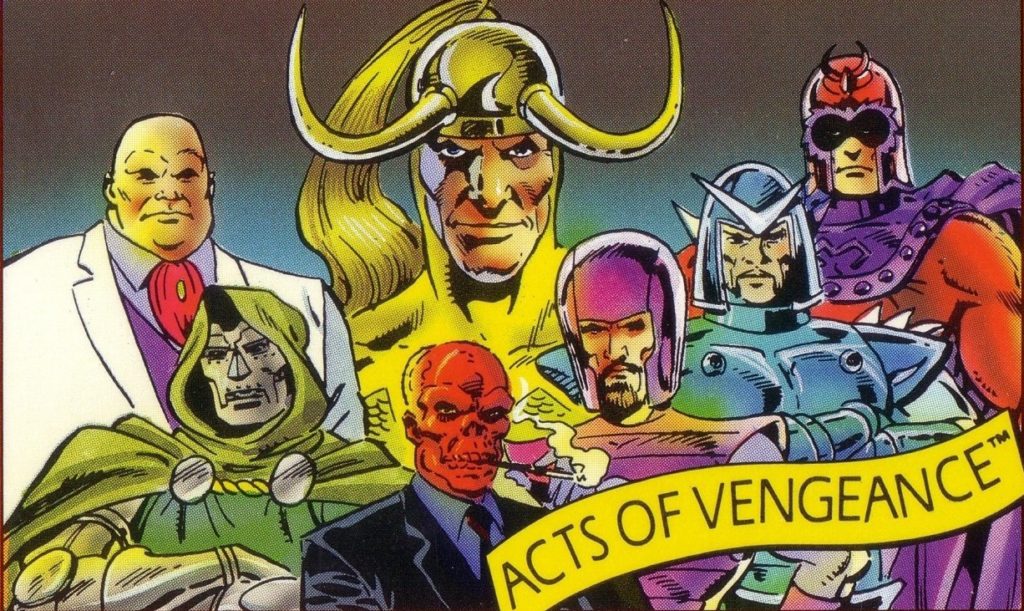 Balancing the scales somewhat, but perhaps not enough, is that in this reimagining of Marvel history Magneto would not be among the Prime Movers. In the AoV story we saw published, he was one of the most dangerous among them, though it was ultimately revealed (in the captivating Captain America #367-368) that his involvement in this group was a ploy to get close enough to the Red Skull that he could exact vengeance on the Nazi supervillain for his genocidal actions during World War II. However, a Magneto already embroiled in building his own team of X-Men and combating Zaladane’s conquest of the Savage Land would have more immediate concerns, and thus the offer of a position of power with the Prime Movers would be rejected even if offered.

With this sorted out, let us ask then, how the Acts of Vengeance would look in a world where the paths of the X-Men, Spider-Man, and Magneto changed dramatically . . . What-If . . ?

In the original AoV Loki had tried to recruit the Leader as a pawn in his schemes, but the high-headed greenster turned him down, believing himself worthy of a loftier appeal. Without Magneto available to round out the Prime Movers, the Leader gets his wish and adds his genius in coordination and planning to directing the many villainous agents of the Prime Movers to be more dangerous than ever. 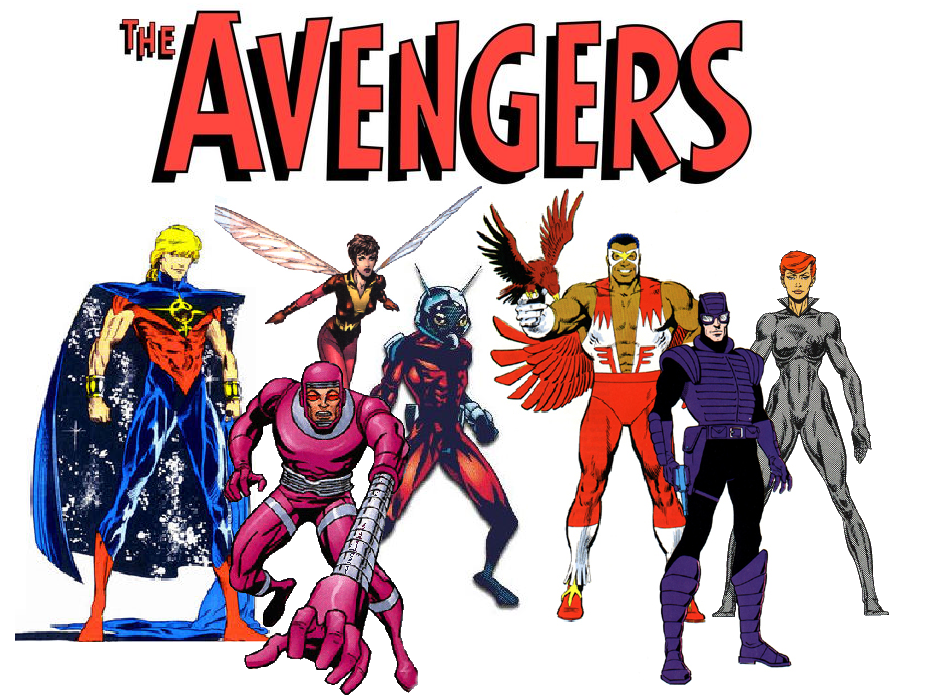 What’s happened to Earth’s Mightiest? Without a cosmically powered Spidey to distract the likes of Graviton, Trapster, the Brothers Grimm, TESS-One, Rhino, Shocker, Hydro Man, Titania, Kingpin, Dragon Man, Molten Man, and the Chameleon from the Prime Mover’s onslaught on the team, the Avengers have been hit far harder than they were in the real AoV. The result is a more devastating assault on the Avengers than even during the siege of their Mansion by Baron Zemo and the Masters of Evil. Out of this disarray a new rag-tag team of heroes, each of them by measures, diminutive, humble, or just plain unpowered, pulls together to form a desperate Avengers roster. 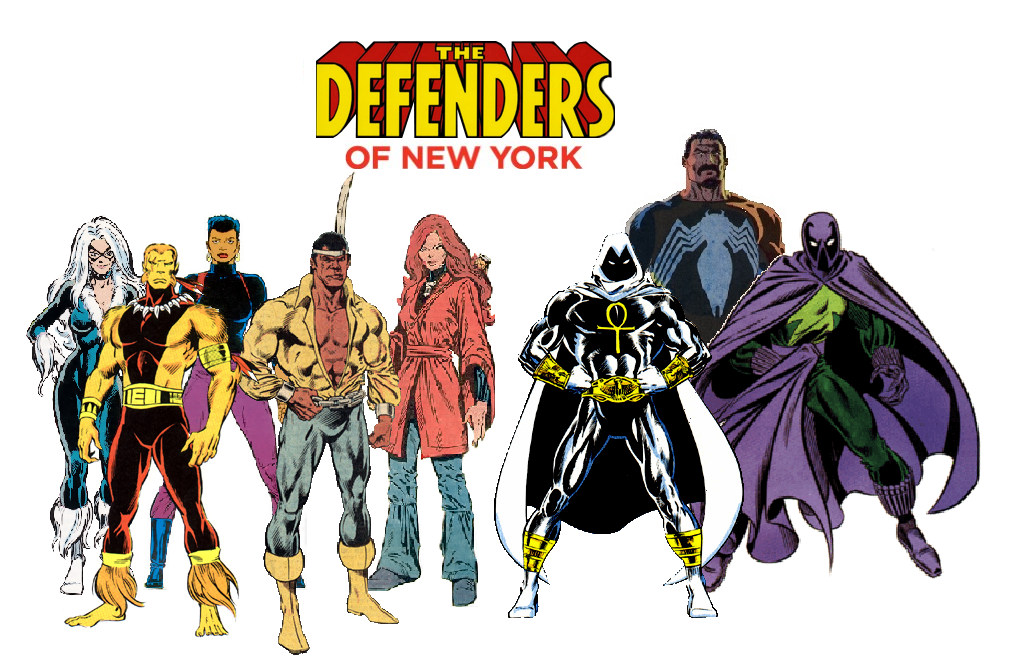 Guided together by the disembodied astral form of Doctor Strange this team battles against impossible odds in a New York that is becoming the personal domain of the Kingpin.

Thor and the New Warriors 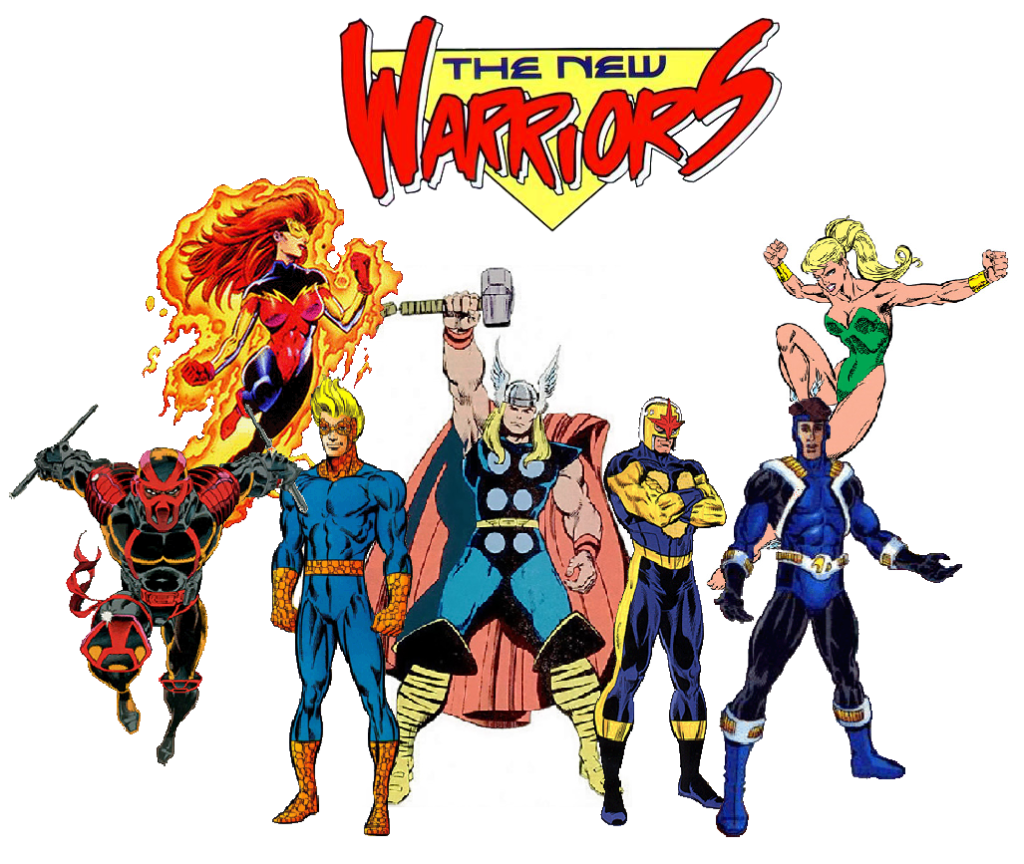 Did you know that the New Warriors first came together during AoV in the pages of Thor? As with the original AoV, this new team and Thor will have to combine all their unified might into fending off the unstoppable fury of the Juggernaut! After that, perhaps they can rally to pick up where the devastated Avengers (?) left off! 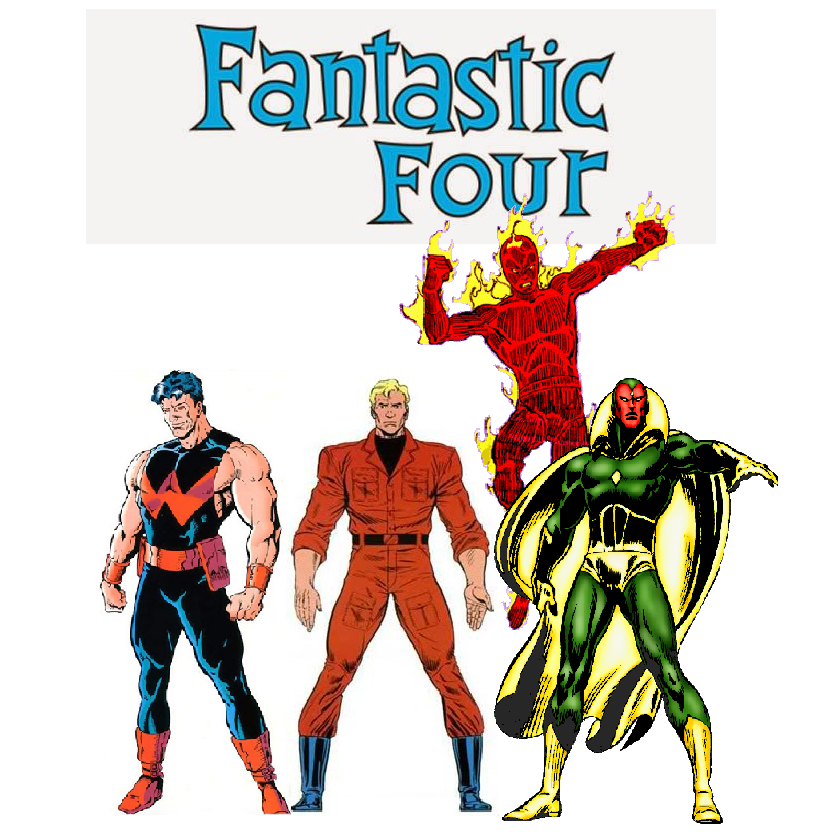 As in the original AoV the Fantastic Four secure the Baxter Building and sojourn to Washington D.C. to testify against the Superhero Registration Act (yep, over 15 years before Civil War). However, with U.S. Agent standing as the head of Freedom Force it’s this legitimate and official superteam of the Federal Government that is manipulated by Dr. Doom into tackling the Fantastic Four, branding them as outlaws, and arresting our classic heroes on false pretenses. Meanwhile, out in California the still standing members of the West Coast Avengers form a new familial foursome, foraging east to face the foul fiends poised to finish our many New York based heroes. Thus, the First Family of the Marvel U will temporarily give way to this Futuristic Family of . . . 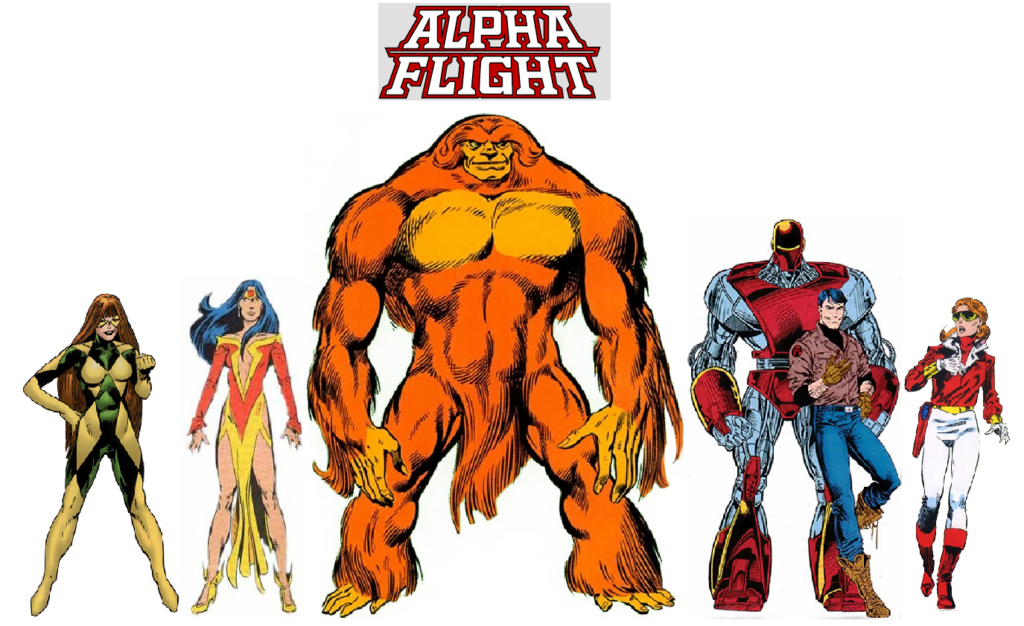 As in the original AoV, fighting a few American villains (the Owl, Nekra, and Scorpion) who ventured North to flee the Superhero Registration Act being considered state-side, and at odds with their Ottawa-sanctioned replacements in Omega Flight, the Alphans are about to face the threat of Llan the Sorcerer.

The superhero clean-up company Damage Control experienced a brief revival during the published AoV event we know. However, in a world where New York has become a full on war zone between the forces of the Prime Movers (especially Kingpin and Red Skull) and the resistance of the Avengers and Defenders, Damage Control provides a different kind of resistance as an underground organization of ordinary men and women with a heroic spirit. Each of them empowered by a small fragment of the Uni-Power that might have gone to Spider-Man, these mortal heroes have banded together to stem the loss of life and suffering of civilians in the New York war zone. Who is Damage Control?

What of our unaccounted for heroes? Fear not true believers! They’ll be accounted for in short-order. Let’s take a gander at the fights and fates of our other Marvel heroes in this more perilous Acts of Vengeance . . . 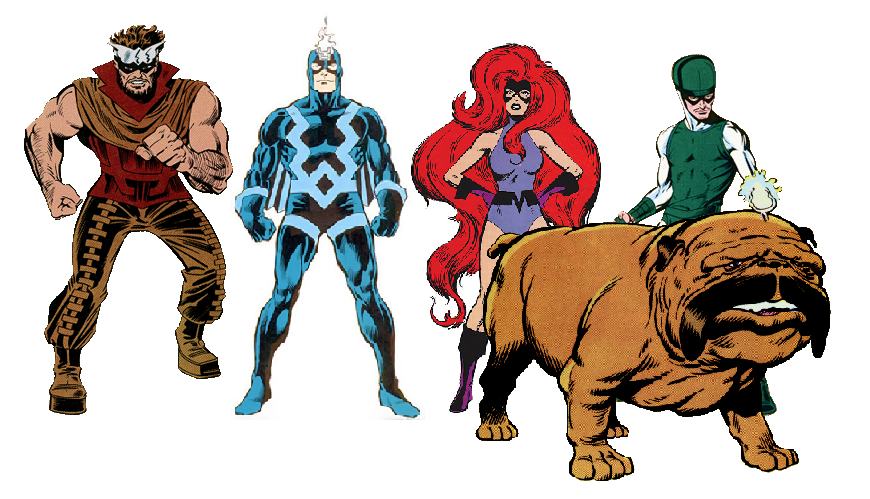 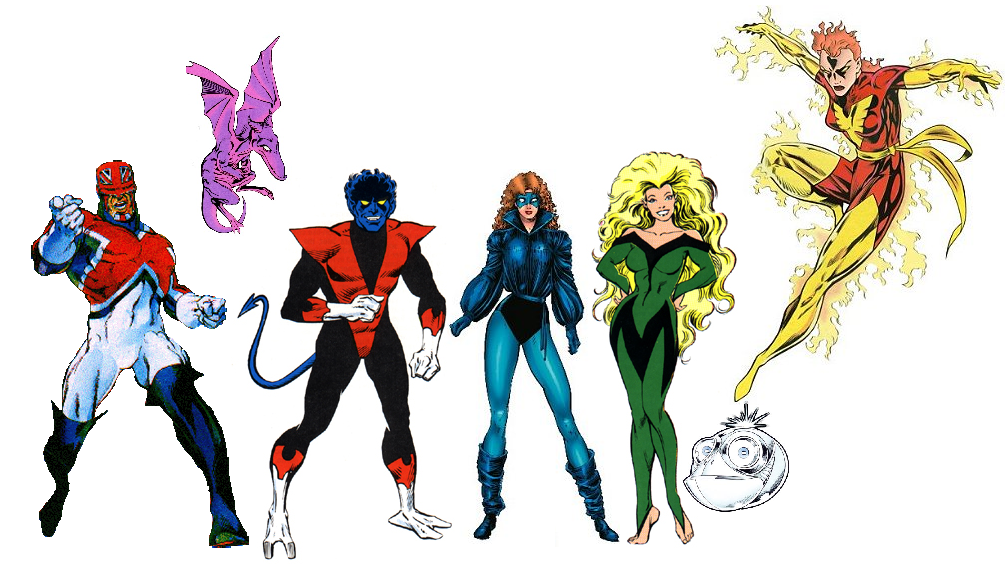