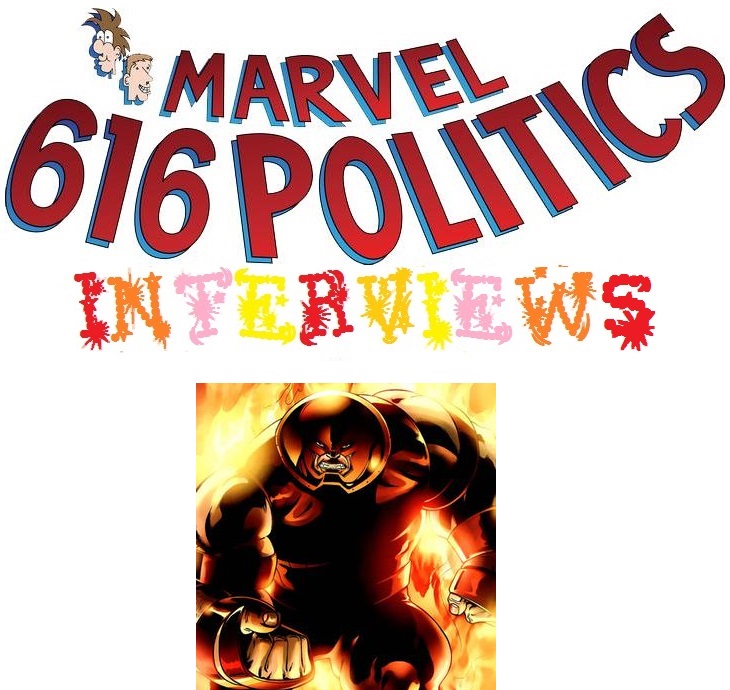 Today on 616 Interviews we have everyone favorite literal red-headed step child, Juggernaut!

M6P: Juggernaut, thanks for being here. Do you mind if I call you Cain?

M6P: Wait, you don’t have a British accent.

CM: Why would I? I was born in California and lived in New York as a kid. Why do people always assume I have a British accent?

M6P: Maybe because of that movie.

CM: Oooooh. THAT movie. What a nightmare. I’m not British. I’m not a mutant. And I don’t cuss.

CM: No. It’s crude and vulgar.

M6P: But you murder people.

CM: Well, yeah. But I don’t cuss. Unlike that horrible representation of me.

M6P: So you’ll murder a man or woman…

CM: Or child. I’ve killed a lot of kids in my day. Not typically on purpose, mind you. Usually just due to structures collapsing. But once or twice on purpose.

M6P: Uhhhh… or child. Umm, but not foul language.

CM: Not a single slur.

M6P: Yeah, but you murder people. You crush them. They don’t even die instantly in some cases. They probably hang on for a long period of time, clinging to hope that maybe they’ll be okay while their body cavity fills with blood and then in a violent convulsion their life comes to an end.

M6P: But not a single four letter word.

M6P: But you murder people!

CM: You need to step your game up.

M6P: Before Mister Marko encourages everyone else to engage in murder we’re going to end for this week. Join us next time for a hopefully less disturbing 616 Interviews!

CM: It was only disturbing because of your little outburst.

M6P: Sure, not because of the whole “I murder children” bit.