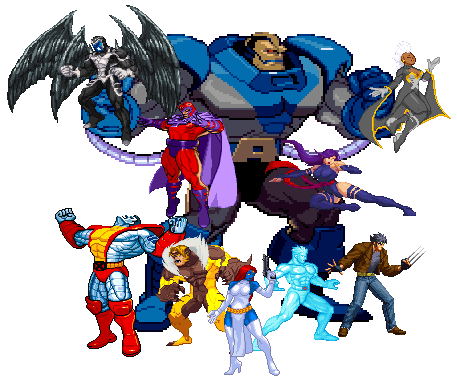 I missed the entire month of February due to some family tragedy stuff but sorted through it by the grace of God. Never fear though Body Politic, I’m back now to make some profound predictions of the publications pending. I’ve been thinking for a while though; the output for All-New, All-Different series launching at Marvel has slowed quite a bit since we’ve entered 2016. Now I could comment upon one new title a week (or less) as before in this column OR I could seize upon this as an opportunity to try something new and different with the forecast column. To keep things more exciting (and to keep Jarid on his toes), I’m opting for the latter.

It seems like we only saw the Marvel U relaunched, but we’ve already got crossovers and events coming along. For that reason, it seems time to bring you our very first ANAD Forecast: Event Edition! 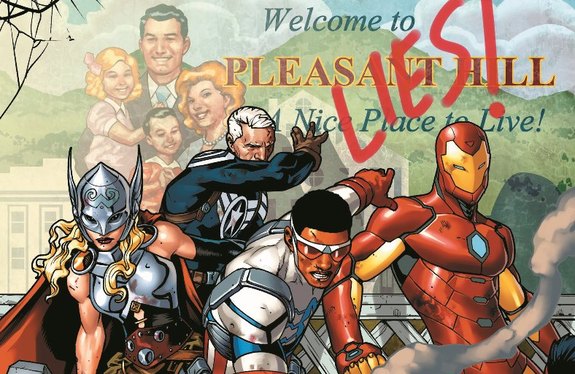 It’s going to be difficult to discuss this Avengers line crossover without discussing the key moments in the already, released Avengers Standoff: Welcome to Pleasant Hill. Fair warning, things are about to get spoiler-ish. Thus far our story has opened with James “Bucky” Barnes aka the Winter Soldier, investigating a SHIELD facility where research relating to a confiscated cosmic cube was being developed. After Bucky is caught in his infiltration by a group of SHIELD agents our scene went black and we were introduced to a character named “Jim” who resembles a young Steve Rogers. The rest of the story followed the amnesiac Jim as he repeatedly tried to escape the idyllic Middle-American town of Pleasant Hill before settling into a life there. In the process, we met Pleasant Hill residents “Mayor Hill” (clearly Maria Hill, not even trying to pretend she’s anything else), the counterpart of the Marvel Cinematic Universe’s (MCU) Dr. Erik Selvig (making his debut in print), and a mysterious young girl. By the end of the issue we’ve learned that Pleasant Hill is actually a super-villain prison where SHIELD, using cosmic cube technology (as teased in Sam Wilson: Captain America’s opening story-arc), reassigns the personalities and identities of captured super-villains as a form of automatic, forced, rehabilitation. We find out Jim isn’t Bucky or Steve – he’s Baron Zemo and by issue’s end the Fixer has helped him remember his identity. The series is slated to run through all 3 ongoing series with the word “Avengers” in the title and will tie-in to many Avengers-related solo series as well.

Pros: Fans of Winter Soldier should appreciate getting him back, as should those who fondly remember the original Thunderbolts runs of Kurt Busiek and his successor on the series, Fabian Nicieza. By turning to a conflict centering on Winter Soldier, it seems this story is also trying to evoke the apparent plot anchor of the next Marvel Cinematic Universe feature (Captain America: Civil War), generally a smart move for bolstering fan-excitement for a publishing project. Readers who have enjoyed Nick Spencer’s Sam Wilson: Captain America ongoing series will finally enjoy a payout to story seeds planted at the very outset of the launch of the ANAD Marvel line. This series is going to be at the center of the Avengers’ corner of the Marvel U for a few months, and line affecting payouts, including a new Thunderbolts series, the return of Steve Rogers as a Captain America, and the promise that this series will set the stage for the anticipated Civil War II event series.

Cons: Spencer is wholly untested in writing events. While his resume of writing humor-infused, single-character-anchored series to acclaim doesn’t necessarily preclude him from proving to be a great “Event Writer” events are tough to pull off even for some of the most celebrated writers working today. Complicating is the fact that this is a cross-over, and roughly 75% of the content will be written by three other writers, Gerry Duggan, Al Ewing, and Mark Waid, each with their own very distinct style, tone, and pacing for their respective series. If editorial has done their double-due-diligence to coordinate between the writers and synchronize their stylistic character, we may be in store for something as seamless as Messiah CompleX or Second Coming. If not, readers may find themselves feeling they’re in the midst of a disjointed improv night of an experience (especially when this is all collected). The same goes for the art. While Ryan Stegman, Gerardo Sandoval, Marcus To, and Adam Kubert are all excellent talents, their styles are very distinct, and fans of one may not enjoy one (or any) of the others. There’s the promised story effects, but with the new Thunderbolts and Steve Rogers: Captain America series already announced, previewed, given full solicits, and (in the case of the former) team-roster previews is there any outcome from this story that requires fans to read the story to discover? Lastly, looking at the checklist for this event, is the reader really going to have to read books like Agents of S.H.I.E.L.D., Illuminati, and Howling Commandos of S.H.I.E.L.D. to follow the story? 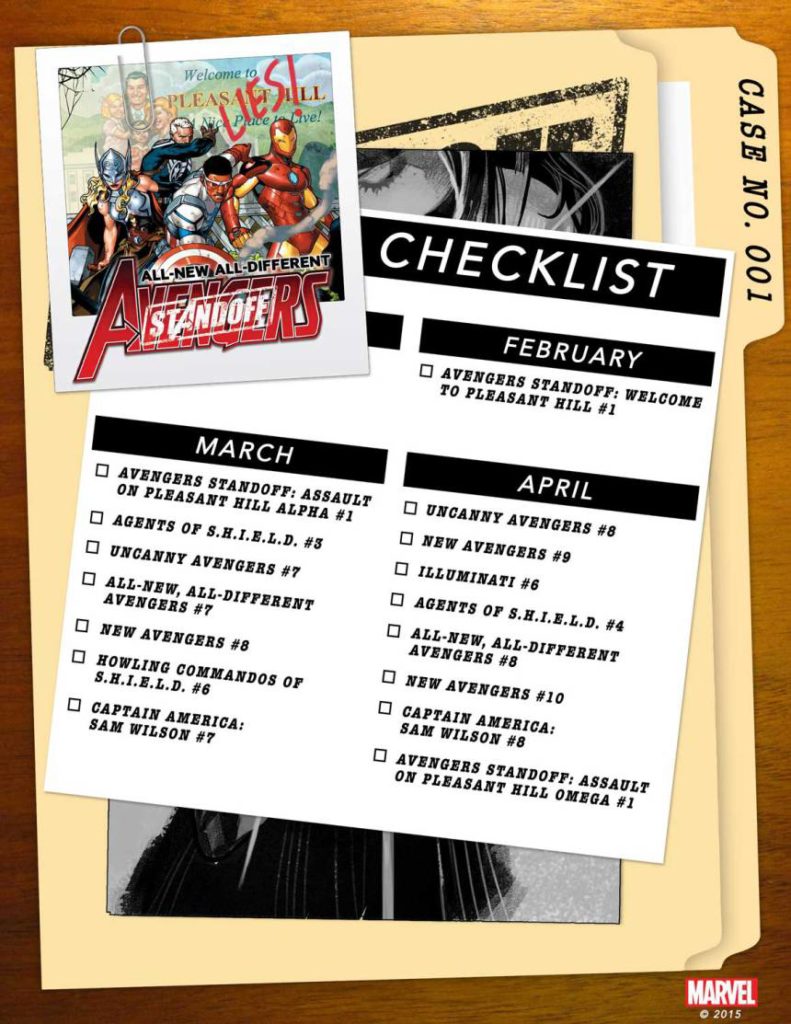 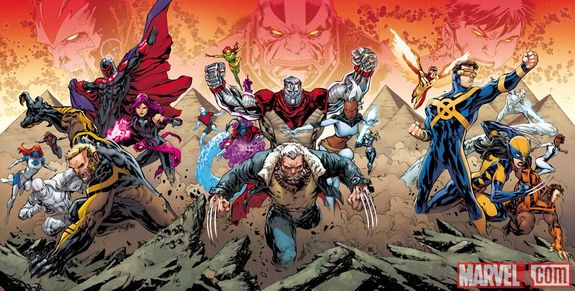 What we know: As if the Terrigen Plague weren’t making things difficult enough for Marvel’s mutants, in some way, in some form, regardless of the mission and membership of their version of the team, Apocalypse is coming for the X-Men. Who is fit to survive? The X-line takes a cue from the classic Fall of the Mutants event by featuring concurrent, thematically similar stories. In this case Apocalypse, his heirs, and followers are at the center of it all. In Uncanny X-Men, fresh from facing Apocalypse’ zealous Dark Riders, Magneto’s extreme force seeks to determine if Angel is back under the sway of the Death Seed. Genesis, the young clone of Apocalypse, takes center stage among the All-New, road-tripping mutant teens. Can his nurture triumph over this precursor’s nature? Finally, in a quantum leap forward, Colossus and a group of young Extraordinary X-Men find themselves in a grim future dominated by Apocalypse himself!

Pros: Like our other entries, Apocalypse War is timed to sync up nicely with a highly anticipated feature film for the sake of multi-media synergy: X-Men: Apocalypse. Unlike Standoff, this “event” isn’t a direct crossover which will enable it to evade the editorial and production challenges of mixing distinct writer-artist teams and series tones on a unified story faced by our last entry. This will allow the responsible creators to continue to drive their respective title’s character arcs forward which is good news for fans of these books that don’t want the flow that’s been building to be interrupted, while still providing a distinct jump-on point for curious readers who missed the opening arcs of these books.

Cons: The fact that the stories aren’t directly connected negates some of the incentive, for readers who have yet to invest in all three titles, to give those books they aren’t already getting a second (or first) chance. 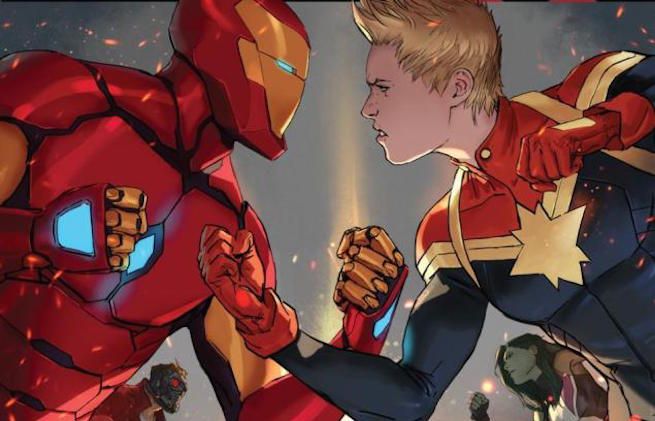 What we know: Named for Marvel’s most critically and commercially successful event! Timed for a release alongside Captain America: Civil War’s theatrical debut! From big-name writer Brian Michael Bendis and rising-star artist David Marquez, the creative-duo behind Invincible Iron Man! A #0 issue featuring art by the ever popular Olivier Copiel! Heroes choose sides under the leadership of Iron Man or Captain Marvel, clashing over the ethics of a technology that allows crimes to be predicted, and criminals to be stopped before they cause harm in the first place. Apparently She-Hulk and War-Machine are sort of important too.

Pros: The tease and the build has already started. Though few details are known, the promise has been made that, like the original Civil War event, this series will have far-reaching, long-lasting effects, and impact virtually every title in Marvel publishing. This is exciting news for the reader waiting patiently for stories that ‘count’.

Cons: Marvel is putting a lot of firepower into this book, and that worries me. Star writer, star artist, and a title evocative of the biggest commercial success they’ve had. A lot of you are going to be mad about what I’m about to say (and I want to encourage you to send your hate-mail care of: Kevin McVicker, 123 Fake St, Somewhere’s-ville, East Carolina, 456789) but the thing is how do I say this? Bendis is not so great with events. I’m going to re-contextualize this part of the article as more directly reflective of my personal opinions and taste than I usually permit myself to address you, Body Politic. As we go forward, remember that Jon has taken off his journalist hat and entered firmly into J. Jonah Jameson editorial territory (though that doesn’t mean I’m about to be wrong, simply that you are about to learn more about my personal taste than you have in the past).

First, let me be clear: Brian Michael Bendis is not a bad writer. He does amazing character work, some of the best today, at least with his pet-characters (and this title seems to rest on two of them in Tony Stark and Carol Danvers). He’s also one of the strongest series-opening writers working today. Thinking back on the events he has done, Avengers: Disassembled, House of M, Secret Invasion, 50% of Utopia, Seige, Age of Ultron, his issues of Avengers vs X-Men (which included #0-1, 8 & 11), his two-thirds of Battle of the Atom, and Black Vortex – they have very strong first issues across the board. Some of them had strong second, third and even fourth issues. All of them have had jaw-dropping moments and big reveals. Yet with every Bendis event I’ve read (and I’ve read them all), no matter how much time he had to unpack his story in the lead-up to the event, no matter how many issues he has to get where he’s going something seems to happen as the story goes on. Thinking back on all of those same major stories, there was a point in each of them when the story seemed to lose focus, lose pace, and then suddenly rush to a hasty conclusion to establish the new status quo discussed at the preceding editorial summit. Before you go thinking I’m just being down on Bendis, I’m going to reiterate that writing events well is HARD. Bendis is hardly the only writer who has started an event with vigor, only for it to toddle clumsily to a less satisfying conclusion. He is, however, the most prolific. It’s having that larger body of work to draw from, and the consistent faltering past the first act that leaves me to forecast that Civil War 2 will fall short of its namesake in terms of both critical and sales success. I don’t want that to be true. I very much want Bendis to prove me wrong. However, I don’t make predictions based on hope alone (if I did I’d have predicted All-New FF by Durmin, Davis, Farmer and Acuna to be the commercial and critical breakthrough of 2016), and history suggests I should advise cautious optimism with this series. I know a lot of us are going to buy it, and a lot more are going to read it, and I encourage us all to do our best to enjoy and celebrate it for what it is rather than casting it in the light of its synonymic predecessor.