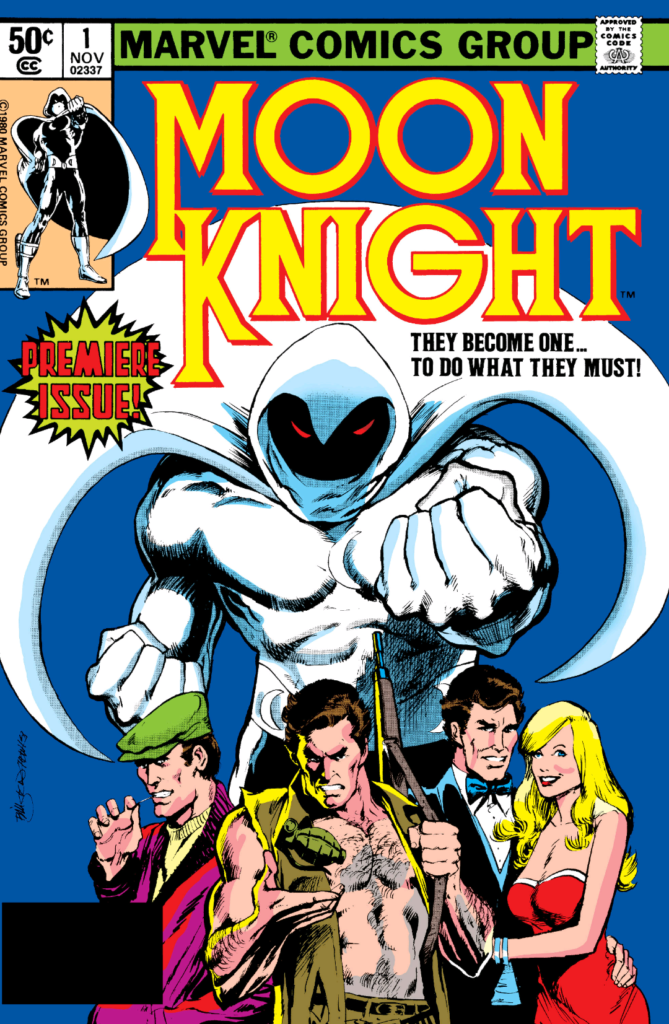 This is the first on-going series featuring Moon Knight although he had first appeared five years prior in Werewolf by Night #32. Prior to his solo series, Moon Knight had become a member of the Defenders for a short period. Though in his first appearance Marc Spector was already under the Moon Knight mantle, this story takes place prior to that and recounts the character’s origin. It is also the first appearance of Bushman. This issue was released the same week I was born; not important information for you, but I think that’s cool.

The action starts as a band of mercenaries lead by Bushman attacks of group of rebels in the desert south of the Egyptian border. Marc Spector, a soldier-for-hire, is part of Bushman’s forces, but does this with a heavy heart. Unhappy about brutal actions of the group Marc plans on fleeing that night with Bushman’s pilot, Frenchie, who shares Marc’s outlook.

Bushman gets news that just south of Luxor an archeologist has uncovered a pharaoh’s tomb and plans to attack the location to steal the riches for himself. Marc and Frenchie know full well that there are no rebels at that location, only civilians.

Bushman’s team hits the site. Seeing the brutality of the action, an Archeologist named Peter Alraune decides he must attempt to murder Bushman much to the anguish of his daughter Marlene. Peter grabs a jewel encrusted dagger and stalks towards Bushman. Marc sees this happening and in a reflexive move stops Peter from murdering Bushman, only to his shock to see Bushman use his metal coated teeth to rip Peter’s throat out. Marc rushes towards the archeologist’s house and warns Marlene to leave. When that doesn’t work he lies and says he killed her father just to scare her off. She flees the town.

Walking back towards the center of town, Marc is about to also flee with Frenchie when he notices Bushman’s mercenaries lining up the people of the town to execute them. Marc tries to stop them, but the town is massacred and Bushman has had enough of Marc. They take him out to the middle of the desert and leave him there to suffer and die. 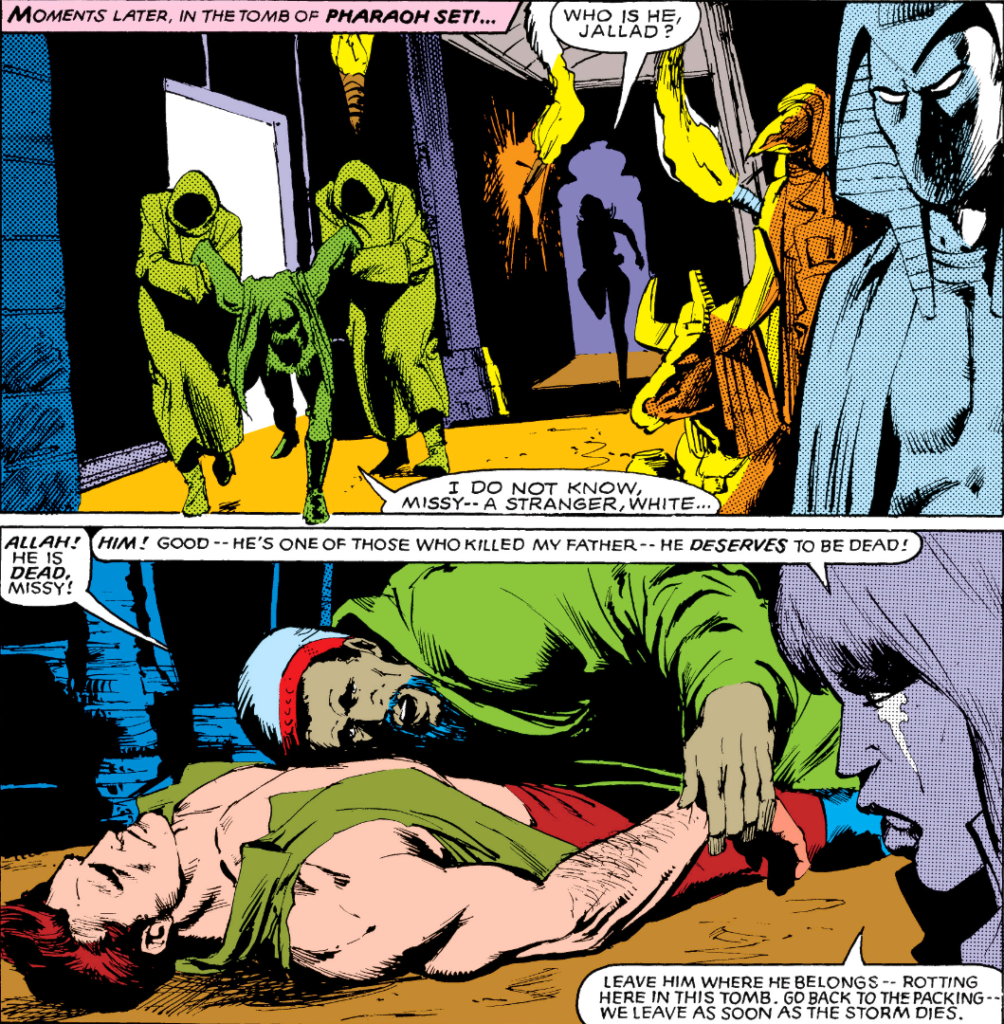 Marc slowly makes his way over the period of one day across the desert and somehow stumbles upon the tomb of Seti. There are men there protecting Marlene, and when Marc finally collapses, one of them declares he has died. Marlene is distraught because although he hates this man because she believes he killed her father she doesn’t want to harbor that hatred for anyone.

In the shadow of the statue of Knonshu, the lifeless body of Marc Spector lays before suddenly to the shock of Marlene he comes to. It is unclear at the moment whether or not he just was near the point of death due to exhaustion or if he was actually dead, but he wakes with strange knowledge of who Knonshu is and he is full of energy. He grabs the cloak draped around the statue and goes after Bushman.

He kills several of Bushman’s guard and finds Bushman celebrating by having the widows of men he killed that day dance for him. Marc attacks him, but is distracted by Marlene who is grabbed by Frenchie. Bushman escapes and Marc collapses again.

All three head back to America, where Marc takes up the alter egos of Steven Grant, a millionaire playboy, Jack Lockley, a street smart cabbie, and Moon Knight, the specter of vengeance. 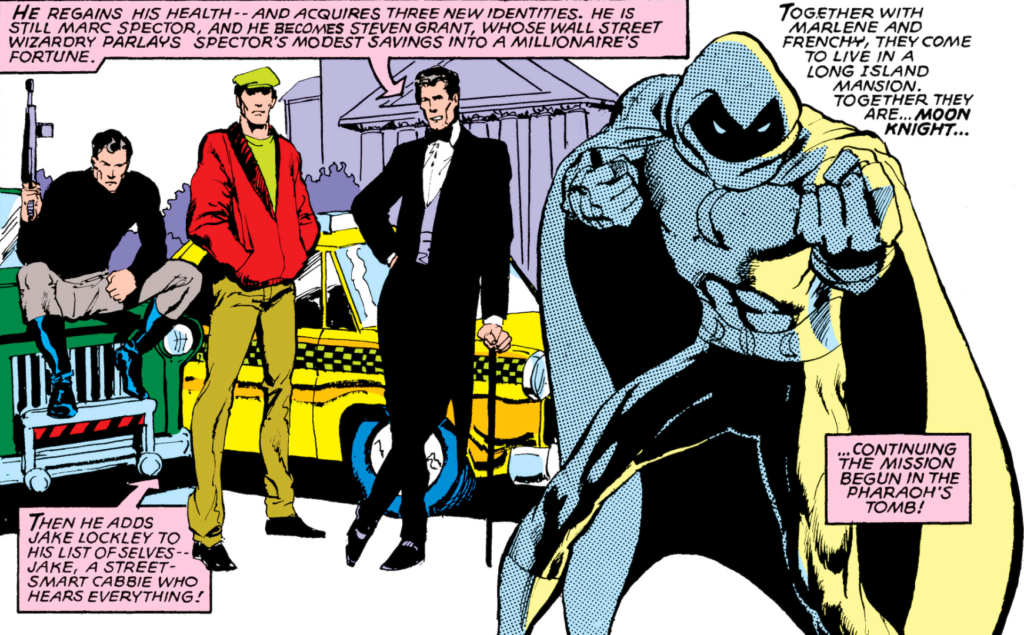 He discovers a heroin dealer he has beat up is wearing a locket with Bushman’s logo on it, and from this is able to locate Bushman’s New York location thanks to help of an informant he’s gained under the Jack Lockley identity. He changes into Moon Knight and heads to the strip bar owned and operated by Bushman. He easily handles Bushman’s guards and goes into Bushman’s office.

Bushman attempts to use the jewel encrusted dagger to kill Moon Knight, which ended up being the only valuable he was able to acquire in Egypt. Moon Knight easily beats Bushman, but is stopped at the last minute by the pleas of Marlene who doesn’t want Moon Knight to become a murderer. They hear sirens coming down the street due to the ruckus Moon Knight has caused, and so they decide to leave Bushman for the police. They leave by the roof, using Marc’s crescent shaped copter, and the police stumble upon the bloody pulp of Bushman. 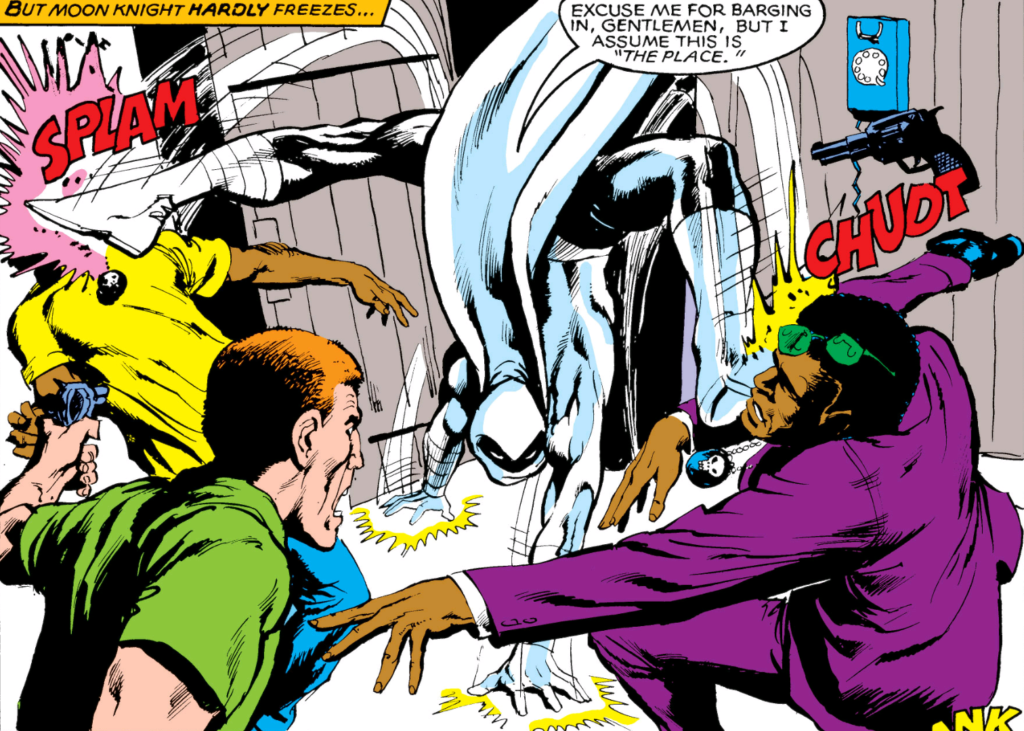 I really hate writing this, but this issue really doesn’t stand up as time has passed. The story and the origin of the character are great and one of the reasons why the character has such a rabid fan base. However, this issue isn’t that great, especially when you look at issues further along in this series’ run. This is one of Marvel’s first main series to drop the Comic Code Authority seal on the cover.

The plot at point is rushed and not expanded on. This may be entirely a modern view on this issue, but this should’ve been stretched into three issues at a minimum. The pacing is at a breakneck speed and it doesn’t give time to offer any real explanation for what is occurring in the pages. The fact that later writers would actually use this issue to point out that Marc Spector was potentially schizophrenic makes a lot of sense, because that is a feeling you get from this issue. 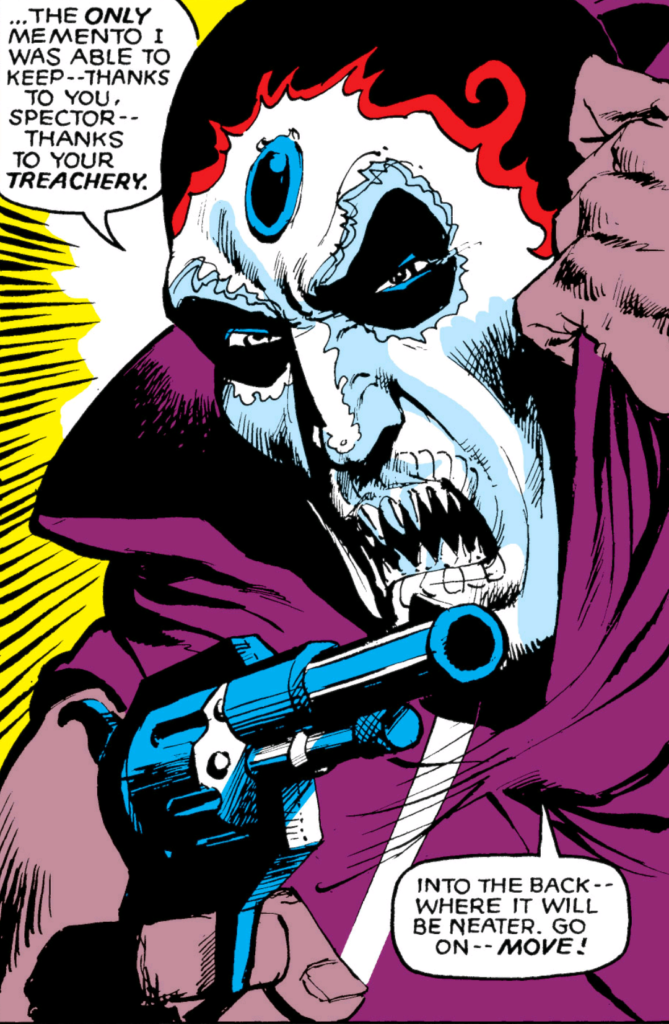 The plot itself isn’t bad at all but the pacing and utter lack of explanation on certain points even with my hindsight knowledge hurts this issue. I can’t really recommend this issue to someone who wants to get into Moon Knight. I don’t think it has the grip on the character other future issues have.

Beyond the plot, the art, sadly isn’t that great either. A lot of this has to do with the colors, but the pencils are rushed and a bit weak at points themselves. I think this was prior to Sienkiewicz coming into his own style as an artist, and this issue is a bit rough on the art. Further issues in this series are great, but for this one, the often washed out or non-existent background for several panels in a row along with undefined characters is not something I call great art. Where it is good, and it has its point, it is great, but a lot of this issue, like the plot, has art that feels rushed. 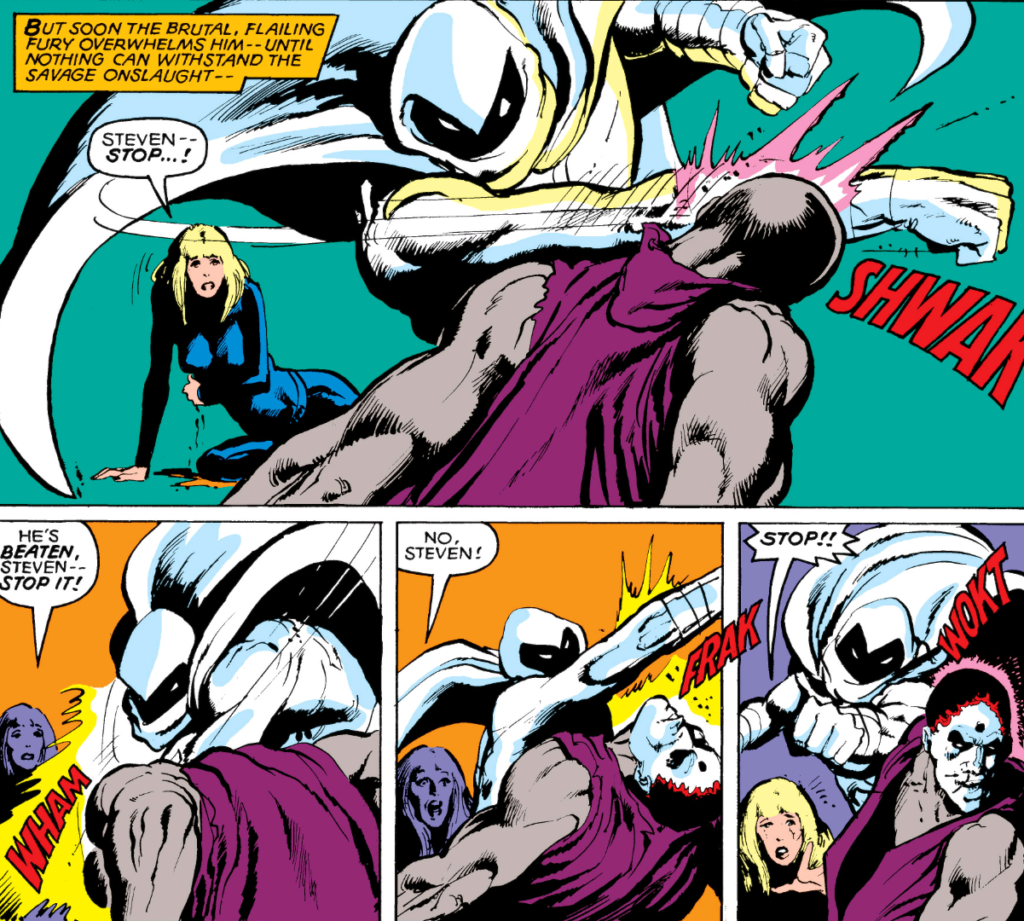 Some are getting ready with their pitchforks and angry comments, but this issue just doesn’t hold up. It doesn’t have the fun energy of other issues with large plot holes and goofy pacing, like a Jack Kirby book. I was surprised at my opinion as you may be, because some twenty-two years ago when I first read this issue, I loved it but now, I can only recommend it to those who are already fans of Moon Knight. I think it is a must read if you are a fan, but if you think you may want to become a fan of Moon Knight, there are other, better points to start at. I can’t recommend you start here, at the beginning. I know that sounds weird. It sounds weird to me too, but these are the words my fingers are typing. It still hold a special place in my heart because it is a comic that came out the same time I was born, and I’m strange in finding meaning in that and that bumps up the rating for me, because I’m a sentimental cynic.