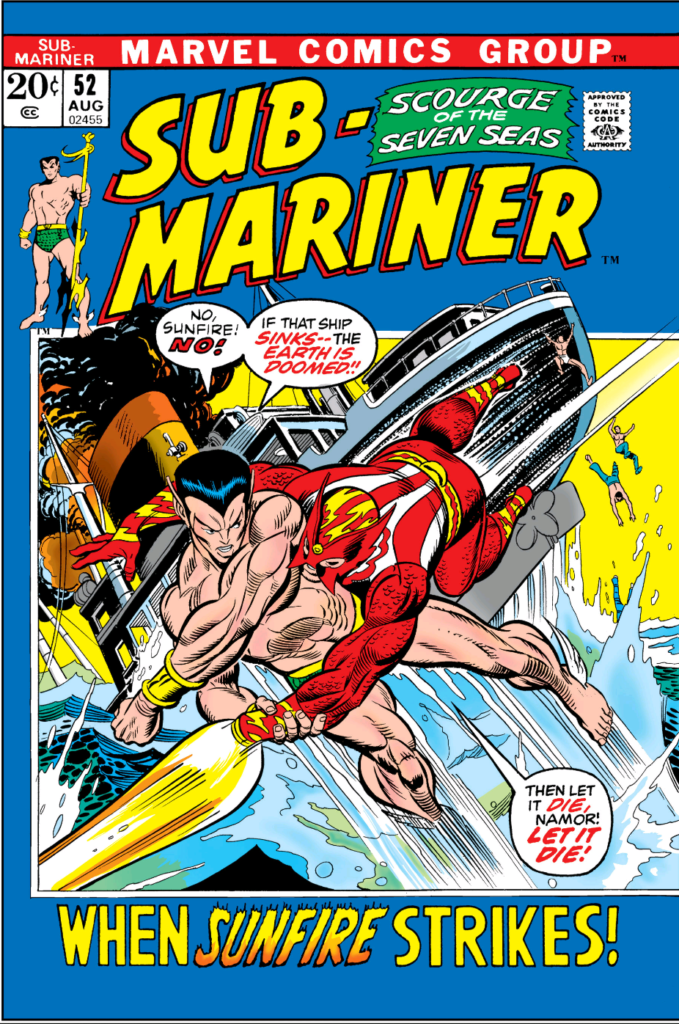 This is part one of a two part issue featuring Namor’s return to battling Asians in the Pacific which was the bread-and-butter of his comics in the Golden Age. This comic features the third appearance of Namorita who only first appeared in issue #50 of this same series, the second appearance in Marvel continuity of the future X-Man, Sunfire, and the silver age return of yet another Golden Age character, Betty Dean, who was Namor’s “companion” during and after WWII. This book was published 6-7 months prior to Bill Everett’s death at the age of 55. 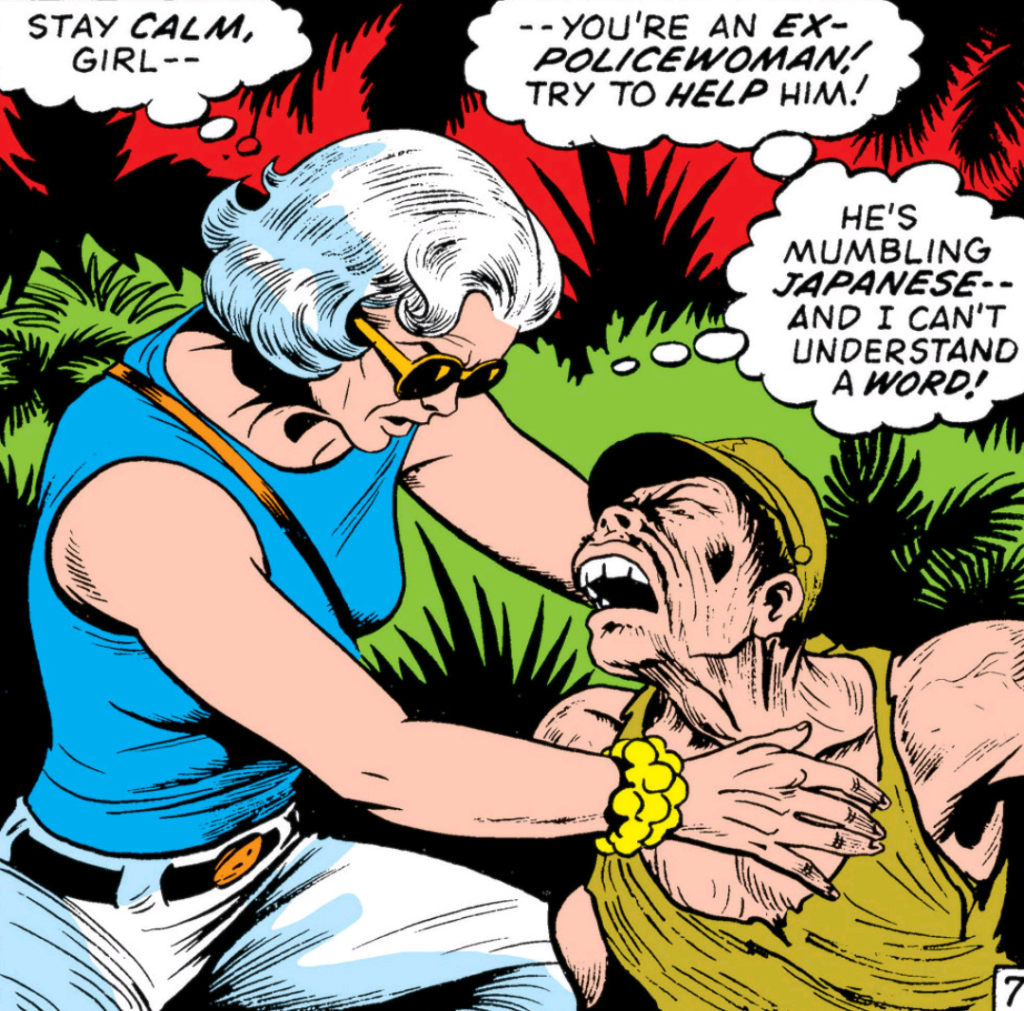 Having finally come to terms with the discovery of his long-lost cousin, Namorita, Namor decides to pawn her off on his love interest, Betty Dean Prentiss, who is living in New York. Namorita protests slightly, but fearful of Namor’s quick-temper backs down and submits to the Sub-Mariner’s will. They leave the ocean for New York.

At the same time on the other side of the world on the island of Krakinowa, Sunfire is showing off his mutant powers to Dragon-Lord, a would-be conqueror of Asian nations. Sunfire believes that Dragon-Lord wants a rebirth of the proud warrior culture in the region, while Dragon-Lord secretly desires total domination. In many ways, Sunfire is played off as an idiot sycophant and less of a villain. 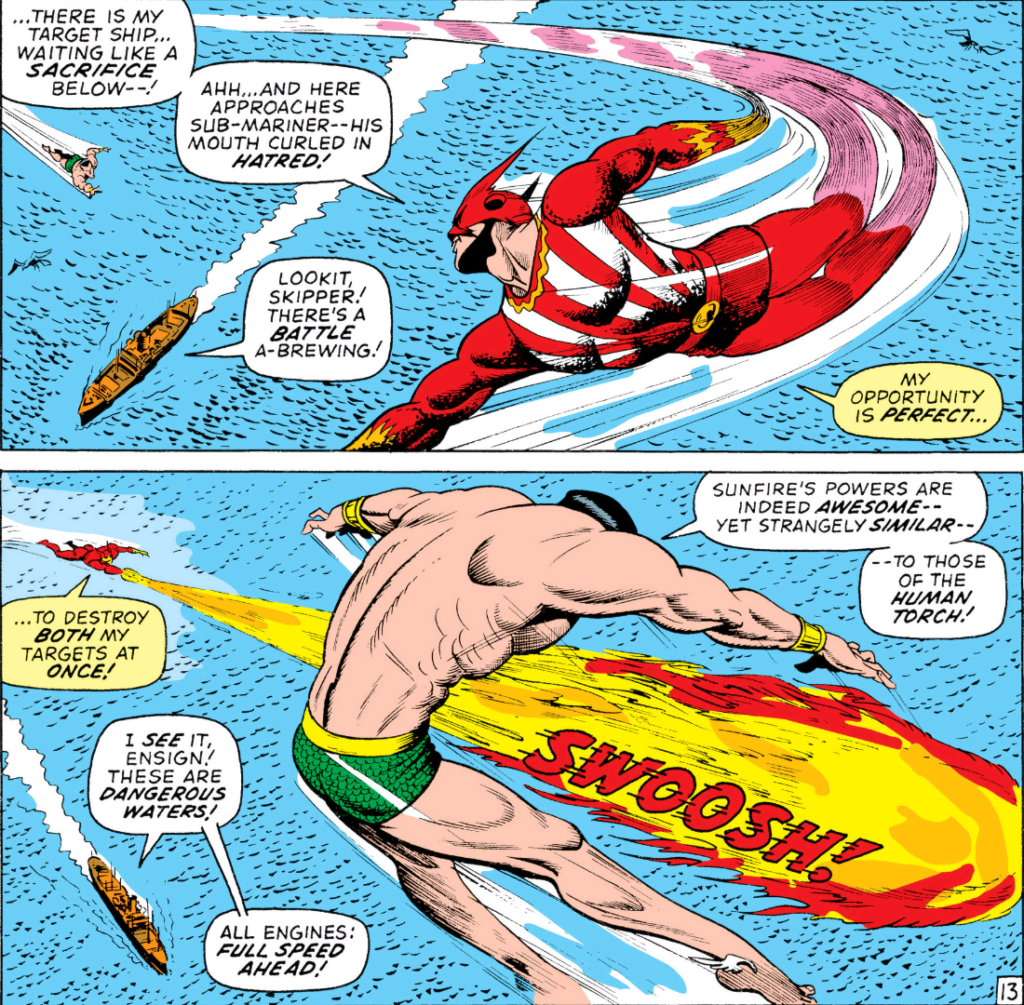 When Namor and Namorita reach New York, they have a mild head-butting with Betty’s landlord. Eventually Namorita makes Namor back off as his temper is getting them nowhere, at which point the landlady tells Namorita that Betty is vacationing on the island of Krakinowa. Namor and Namorita fly off to find Betty, unaware of the potential danger that will occur when the two biggest tempers (apart from the Hulk) end up clashing.

On the island of Krakinowa, Betty is enjoying the beach and thinking of Namor, when one of Dragon-Lord’s slave-workers escapes and finds her on the beach. At that moment Namor shows up and thinks the man is attacking Betty because, basically, Namor (and in way also the writer/artist) is racist against Japanese people.

The scantily clad Sub-Mariner, just as he is attacking the slave, is attacked himself by Sunfire who is looking for the escaped slave. The two mutants tussle for a moment before Sunfire gets the upper hand and escapes with the slave. Namor quickly leaves Namorita in Betty’s charge, and flies off to find Sunfire. 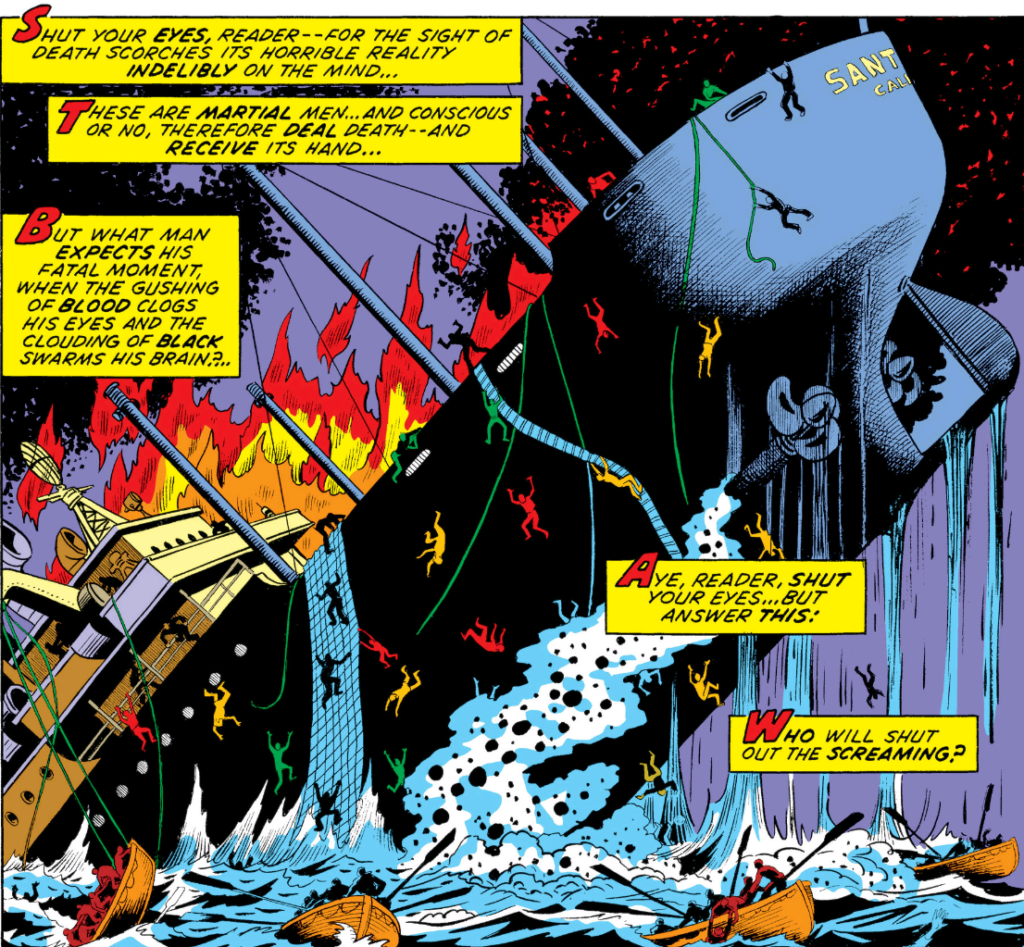 Sunfire returns the slave who warns him of the awesome might of Namor and how many Japanese he fought and killed in WWII. Sunfire, believing his honor was tarnished by leaving the battle before it was won, wants to go back and attack Namor, but Dragon-Lord rebuffs him believing that he could lead Namor to them and ruin their plans.

Namor finds them anyways, and against his basic desires stealthily hovers around the edge of their camp. He hears them talk through their plan, which consists of Sunfire sinking an America vessel on a reef which will release the defoliants it carries into the ocean. Namor knows if this happens it will kill the plankton which will have a devastating effect on all ocean life.

Namor races after Sunfire and catches up with him over the ship Sunfire is attempting to sink. Namor attacks Sunfire without thought, believing his classic battles with the Human Torch have made him ready to fight the fiery mutant. He is wrong, and Sunfire is barely phased by his watery attacks. Sunfire uses his power to push the ship into the reef which Namor stops from happening at the last second. Namor then tries to drown Sunfire, who in a desperate act focuses his power underwater at the base of the ship.

This move causes the tanker’s hull to open and Sunfire bursts open the containers of the defoliant chemicals. Namor drags him to the surface to make him witness the vast horrors of the death Sunfire has unleashed, not just on the men aboard the ship, but also to the world. 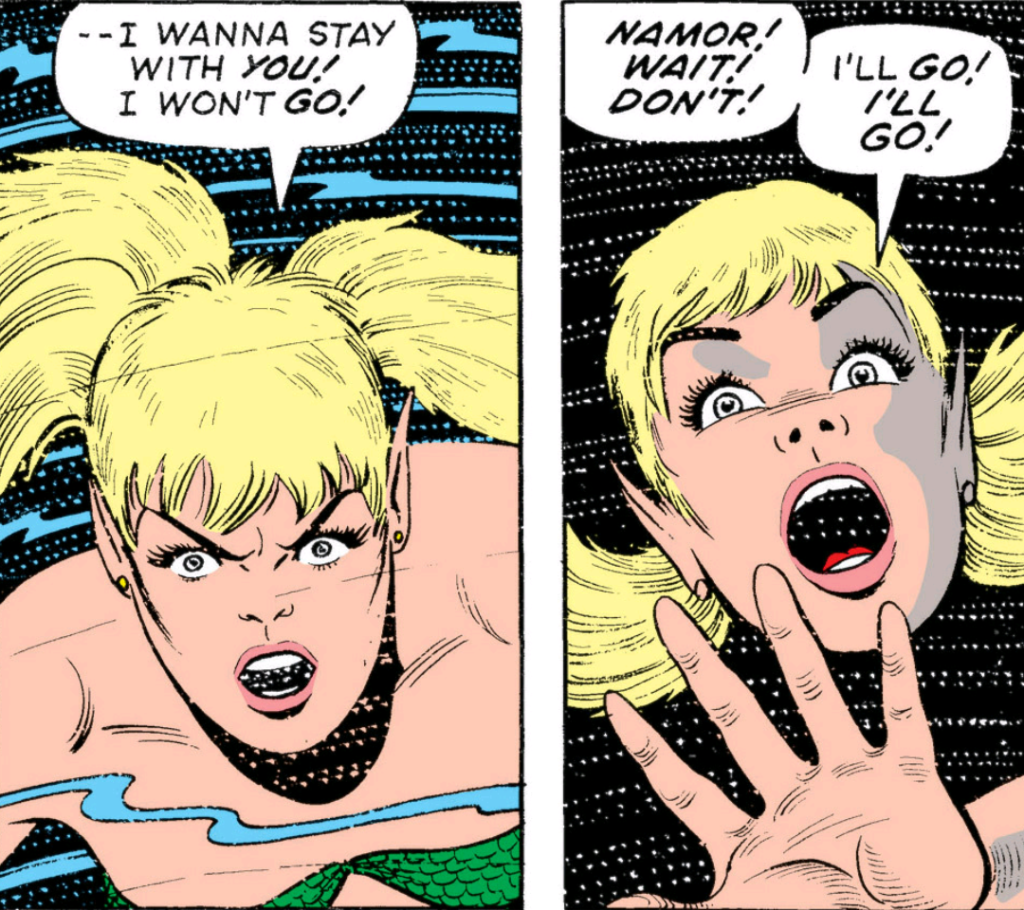 This was a fun read. The art was clean and although certain moments could’ve used less dialogue and more descriptor boxes to explain the panels, over all the plot wasn’t diminished.

The plot felt incredibly forced, but the “hand of god” plot device was fairly common at this time. The story was also very much an “and then…” instead of an “and so…” plot, which was often typical in this period of comics especially given the extended runs on these comics and the quick production schedules.

I don’t think this book should be read by everyone. I think those overly-sensitive or judgmental of portrayals of cultures in stereotypical ways, and are unable to partition them off in the appropriate historical context will probably find this issue racially offensive. The Asian characters are drawn at points with an obvious attempt to define them with buck teeth. Not as a defense or as an acceptance of the stereotypes, but given how he drew and portrayed the Japanese in the Golden Age and into the early days of the Silver Age, I do believe it was highly less offensive in this issue. Out of context and without knowledge of his earlier work, there are many modern readers I can’t recommend this to.

This issue is a great book for Namor fans. It is fun, even aside from the slight racism. Everett is obviously trying to recapture the water/fire battles he created with Namor and The Human Torch during the Timely Comics period of his career. The action and the final battle are expertly drawn and captured and make this a worthwhile read.