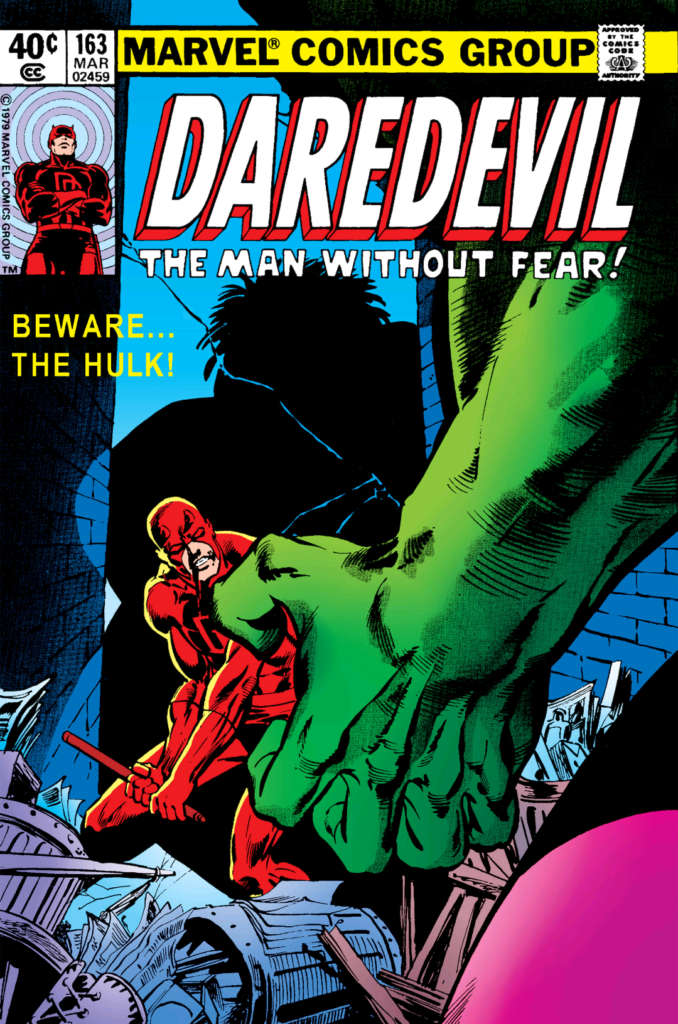 This issue marks the fifth issue of Daredevil drawn by Frank Miller at the beginning of what would become a classic and epic run on the character. Eventually McKenzie would hand off the reigns of the writing, but that would be several more issues to come. The opening to this issue has some great cameos in the mighty Marvel tradition. In continuity terms, this is an important issue in that it is where Ben Ulrich finally figures out Daredevil’s secret identity.

The comic opens at a reelection campaign party for district attorney Blake Tower. There are all sorts of important people at the party including J Jonah Jameson and Tony Stark (and according to editorial legend a miscolored Mary Jane Watson and Peter Parker). Also at this party is Matt Murdock, who doesn’t appear to be enjoying himself. His ex-girlfriend Heather believes it is because she is there with her new boyfriend, but it truth it is because the Hulk has been spotted in New York. Matt can hear the angry heartbeat of the beast in the general vicinity of the party.

Foggy comes to Matt’s side also believing him to be acting weird due to Heather’s date. Matt asks Foggy to get him a stiff drink, and while Foggy steps away, Matt Murdock casually vaults himself over the veranda’s railing and into the New York night. From that point he follows the Hulk’s unique heart beat and finds him down a dark alley way.

After a slight rough handling at the hands of the Hulk, Matt Murdock is able to gradually calm the monster down which gets him to revert back to his alter-ego, Bruce Banner. 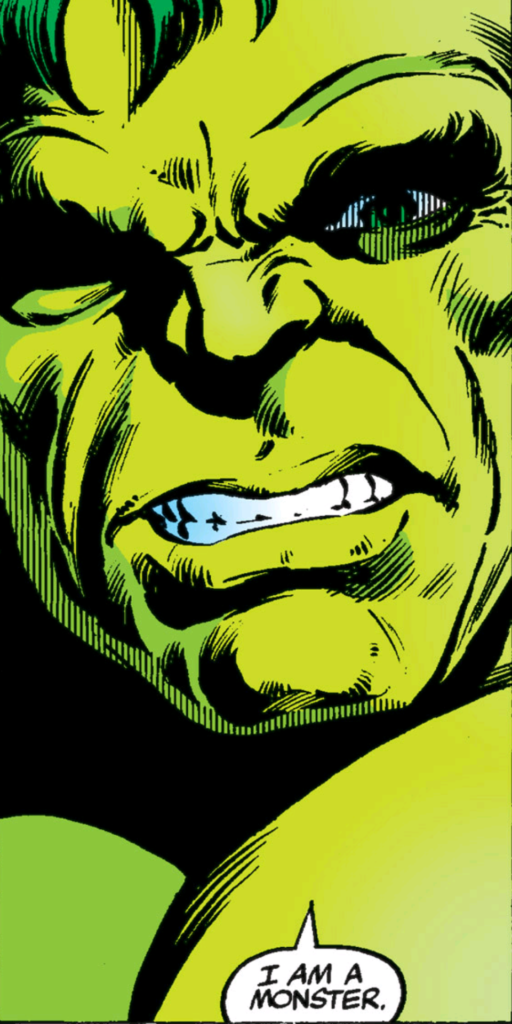 Matt takes Bruce back to his house to give him a good night’s rest. The next morning Matt offers Bruce money, clothes, friendship, and some advice. Bruce gets a little angry over the advice, but calms down and accepts Matt’s help. He then packs his things and decides it is time to leave New York City. Unlike Edward Norton in the Incredible Hulk though, Bruce makes the poor decision to ride the subway. The general rudeness of the public and confinement of the ride are more than Bruce can take and he turns into the Hulk. 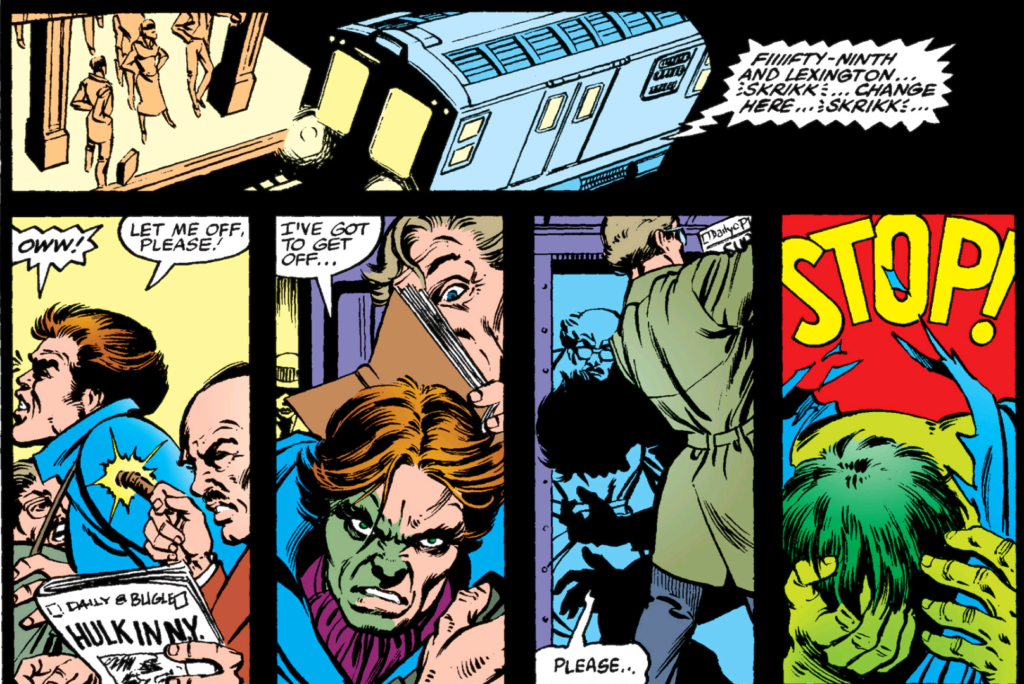 Chaos ensues on Lexington Avenue as the Hulk starts to rampage. Matt, taking a taxi in the area, hears the danger and quickly pays for his fare, jumps out and down an alley where he changes into Daredevil. When Daredevil gets to the Hulk he does his best to calm the Hulk down the way he was able to the previous night, but since this isn’t down a dark alley, but rather in a busy intersection, the Hulk has drawn the attention of law enforcement. One dumb cop who is just dumb shoots the Hulk in the back of the head with his pistol, and everything Daredevil has been trying to accomplish goes down the toilet. Daredevil tries to save the dumb cop, and by doing so is tossed violently to the roof of a nearby building.

Obviously hurt badly, Daredevil gathers his strength and goes back down to face the Hulk again, this time by commandeering a bus and driving it head long into the Hulk. Hulk’s rage gets even worse. 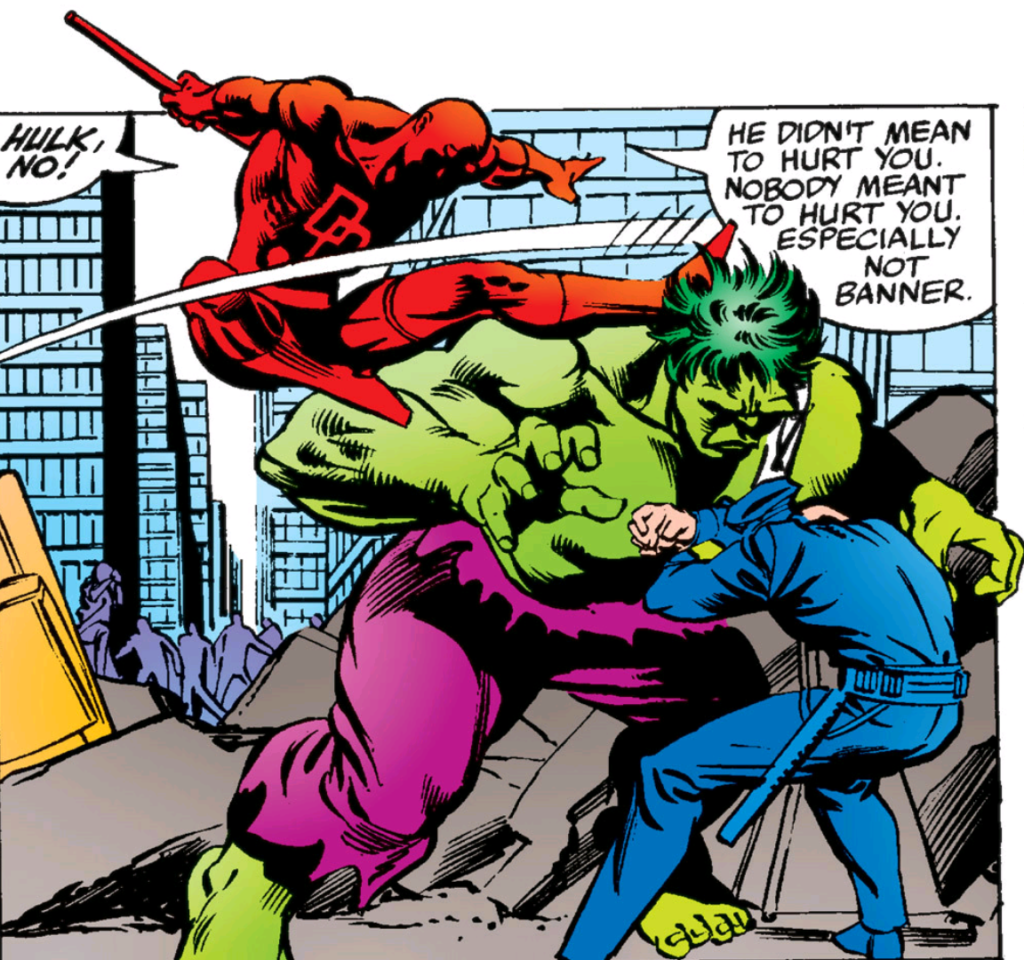 At this same time, Matt’s ex-girlfriend Heath runs towards the scene. She exclaims “Matt!” haphazardly, and Ben Ulrich standing next to her is finally able to put all the pieces together, and figures out the Daredevil is Matt Murdock.

Daredevil tries to fight the Hulk, but is quickly knocked down the same alley he found the Hulk wandering in the night before. When the Hulk comes down to face him, a badly beaten, broken, and bloodied Daredevil tries to convince the Hulk that he is his friend and Bruce Banner is also the Hulk’s friend. Full of rage, confusion, and other unknown emotions the Hulk flees New York after Daredevil blacks out. 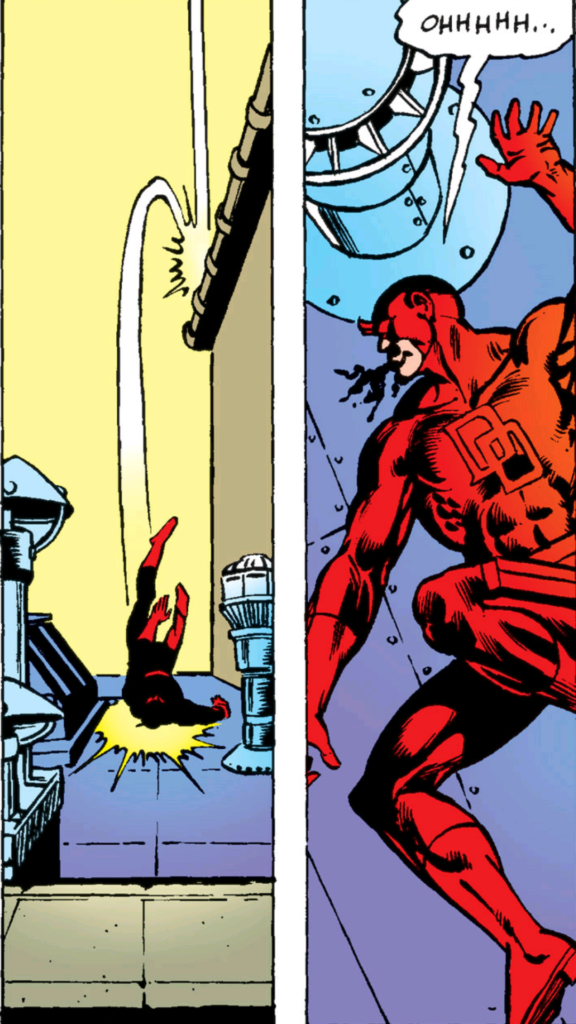 Paramedics rush to Daredevil’s side and take him to the hospital where he is treated for his potentially multiple life-threaten injuries.

The art and writing in the issue are phenomenal. The fight scenes are not only drawn expertly, but written in a highly believable manner regarding the match-up of these two characters. Daredevil resorts to his skill as a lawyer before his skill as a fighter, and once the lawyering is over and it comes to blows, Daredevil never stands a chance. This was the great kind of realism that was slowly being introduced to the fantastical world of comics even at the start of the 80’s, and is especially the grittiness that Frank Miller would become most known for at both Marvel and DC. 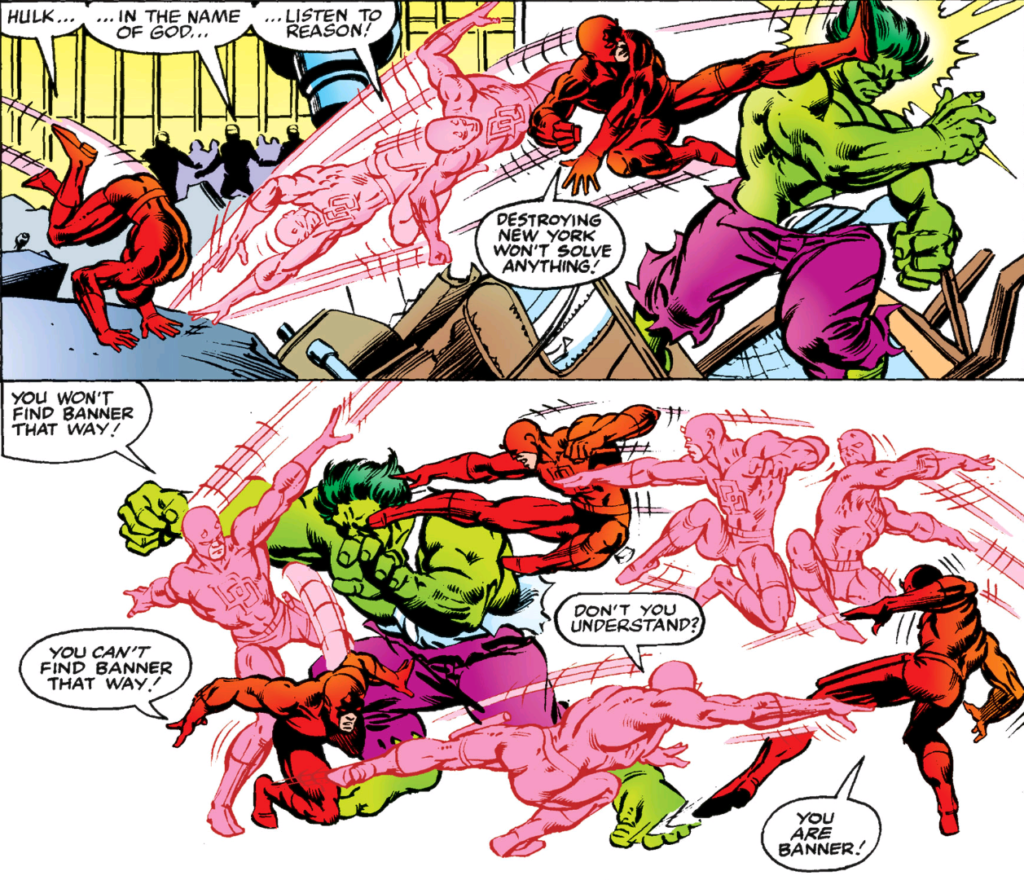 What is interesting is that he is only drawing it, so he must be learning some important lessons in story-telling from Bob McKenzie at this time (not to be confused with Bob and Doug McKenzie from SCTV’s “Great White North” sketches and the movie Strange Brew which were also popular at this same period in time).

The art is clean and much brighter than Frank Miller is known for, which makes the evolution of his artistry just that much more interesting. Although the violence presented in this issue is surprisingly more than I would’ve presumed from this period in Marvel Comics, it can be supported by the tanking sales in this series at this point in time. This issue isn’t too far removed from the point where the series was re-titled “Daredevil and Black Widow” and they fought crime in San Francisco, which was around the point this title was almost entirely canceled.

Frank Miller, Daredevil, and Incredible Hulk fans definitely need to read this issue. Other than that, I would recommend others read even if you aren’t a hardcore fan of those three, if nothing else because it is just a good read. It does a great job of delivering on both action and character, which I believe are the two most vital components of a great comic. Also, if you know a fan of the movie Strange Brew (which you should become if you aren’t familiar with it), then maybe you can trick them into getting into comics by saying it was written by one of the McKenzie brothers (that’s called a “good lie”).