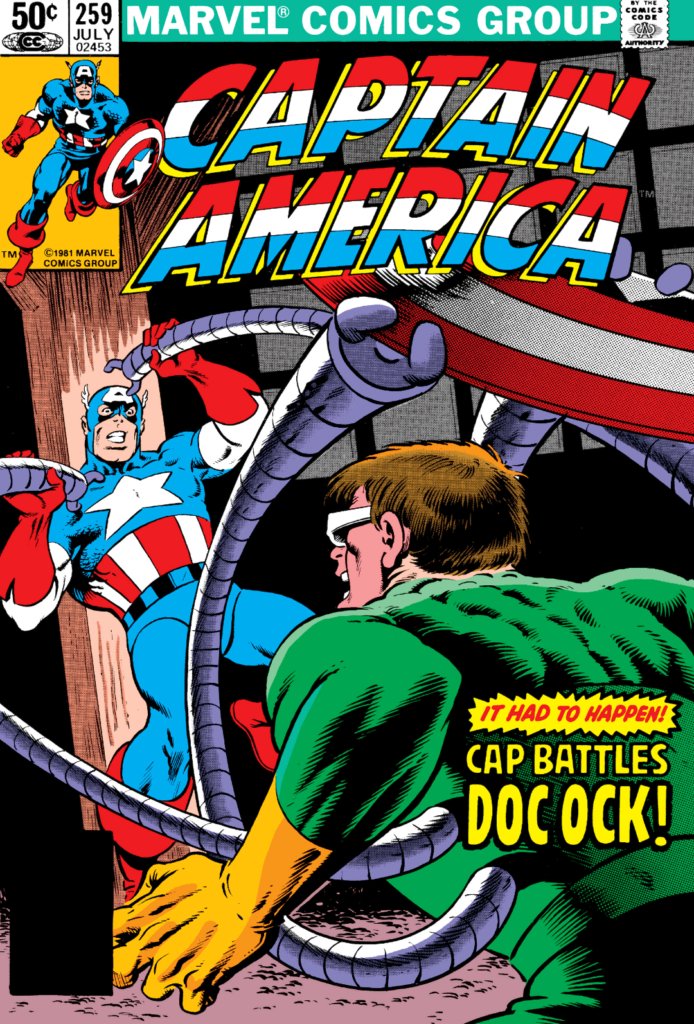 One notable entry pertaining to this comic is the introduction of the characters Ray Coulson and John Coulson who are of no relation to Phil Coulson and never appear again in comics. Maybe that isn’t notable, but has any writer ever bothered to have Phil mention his uncle and cousin building a motorcycle for Captain America? That would be some fun deep woven continuity trivia. Other than that, this issue is the first appearance of Captain America’s patriotic motorcycle, with various other models and incarnations appearing even up into Ed Brubaker’s epic run on the character. In 1979 was the much maligned Captain America movie where he had a motorcycle, but it is unclear if that somehow influenced the comics into adding one for him.

Waking up suddenly early one morning, Captain America believes he felt a shadow pass by his window. Thinking it is nothing more than a bad dream, Steve Rogers gets up and gets ready for the day. He pieces together his portfolio of art to take to an ad agency before donning his familiar duds and traversing the New York rooftops on his way to workout at Avengers’ Mansion. The entire time he feels a presence tailing him.

Unable to confirm his suspicions, Captain America quickly ducks down, changes back into his civvies, and takes the subway to the mansion. The shadowy figure who has been following Cap loses his target but decides also to travel to the mansion. 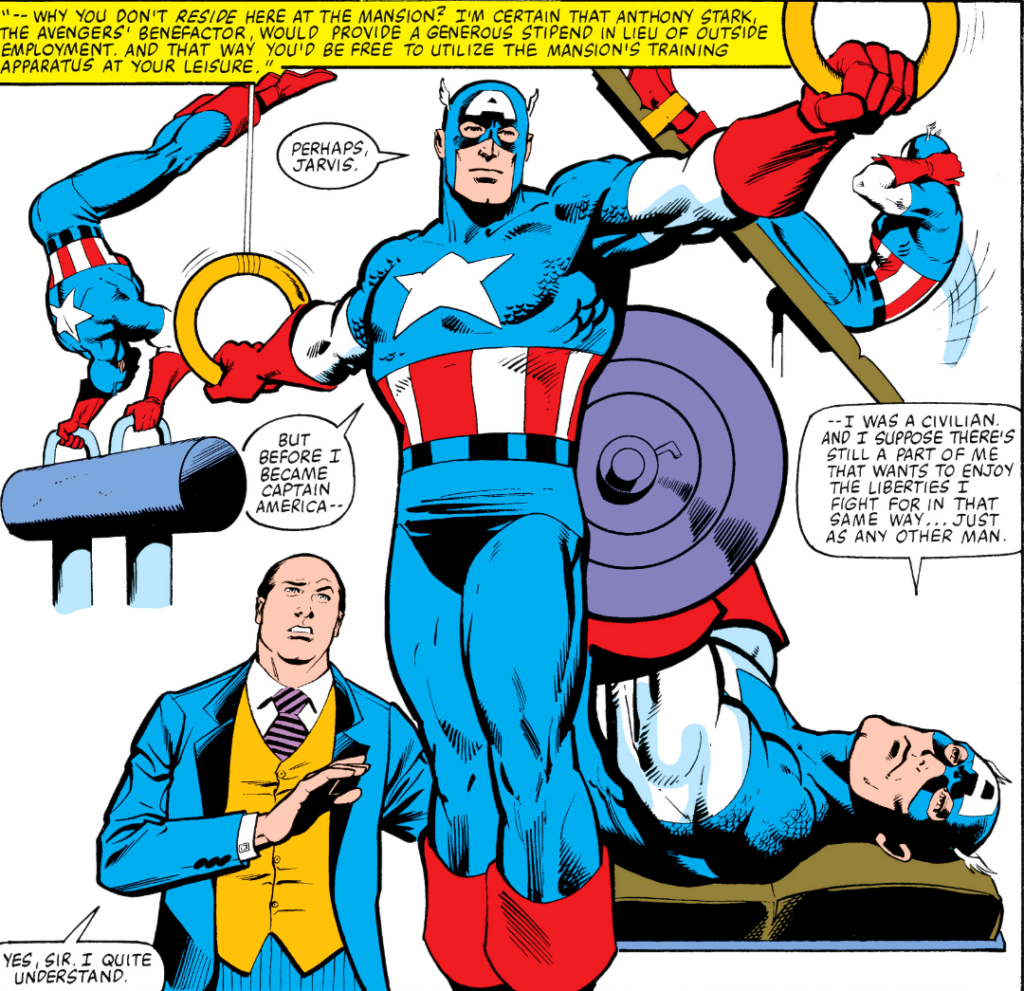 Once arriving at the mansion, Captain America quickly enjoys a vigorous workout in the mansion’s gym. Once finished Jarvis hands him a letter from an old WWII friend named Ray Coulson who has asked for Cap’s help.

Captain America goes to see Ray and discovers that Ray’s son, John, took all the money from the cash register at Ray’s garage and went to join the biker gang called the Huns. Ray doesn’t want Cap to force his son to come back, but merely to deliver a guilt-laden apology to his son in hopes he’ll find his own way. Cap agrees and after a little investigating discovers the Huns’ hideout. 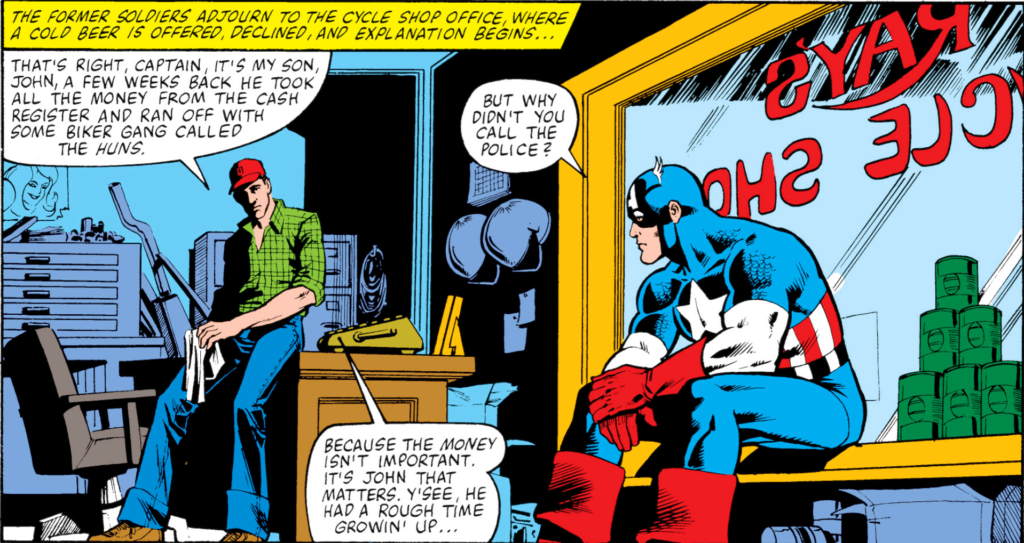 Captain America goes in and asks for John, but the leader of the white power motorcycle gang tells Captain America that he has to prove his worth if he wants to talk to any of the members. The test to prove his worth is to tie his arms to separate motorcycles, have them drive in opposite directions, and not die. Clearly this was made up on the spot since everyone in the gang has two arms.

Cap agrees, and handily passes their test when just at that moment Doctor Octopus crashes into the hideout. Not looking for a fight, Doc Ock steals Cap’s shield in hopes of examining the properties of the material it is made with to help him build better and more reliable arms.

Doctor Octopus flees and Captain America gives chase. Captain America punches him in the face and then Doc wraps him up in his arms. He uses a free mechanical arm to try and decapitate Cap with his own shield. Captain America ducks, grabs his shield, and then throws it at Doc Ock’s head. He is knocked out cold. This is a relevant scene if you’ve read Amazing Spider-Man #600. 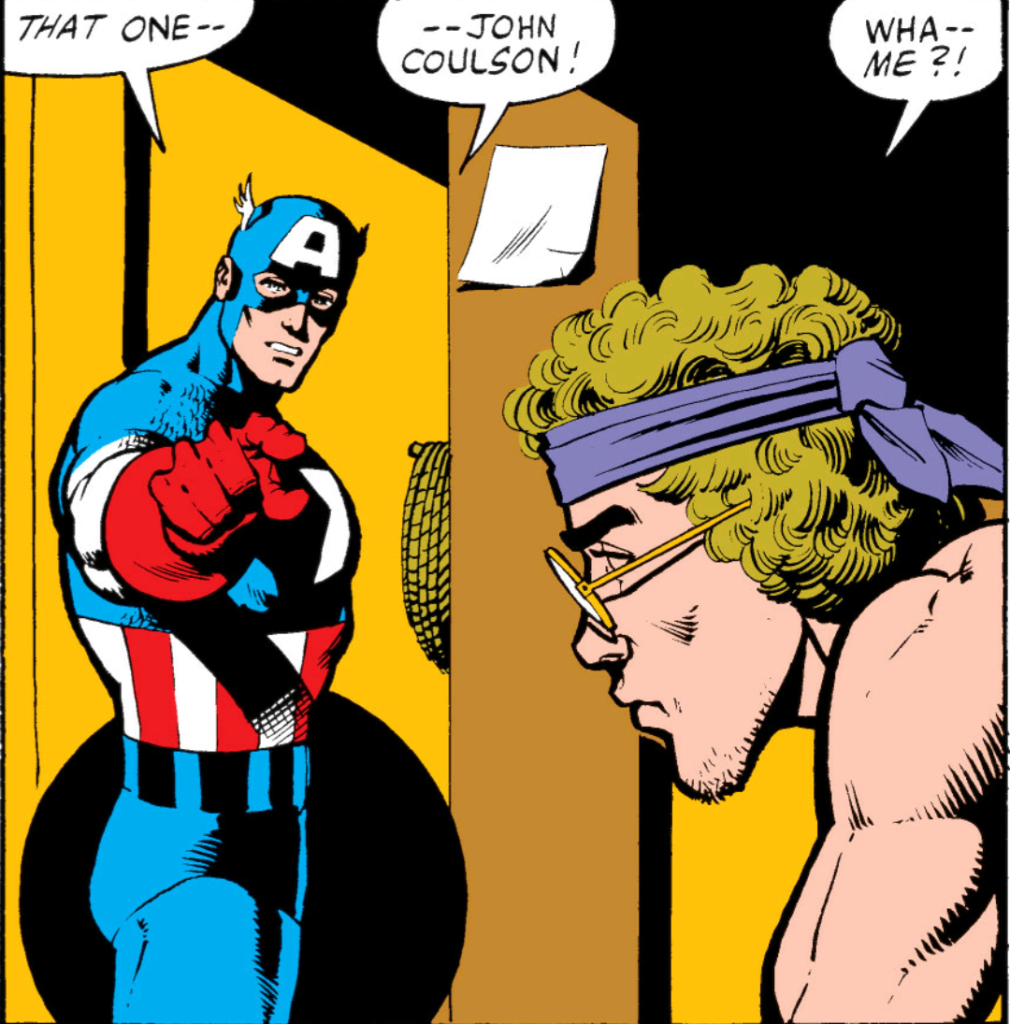 Cap ties up Doc with chains. Coming to his senses, Doctor Octopus offers $1000 to any Hun who helps hold down Captain America. The white supremacists luckily have a code of ethics and tell Ock that Cap passed the test and has their respect. In a way, Cap becomes an honorary member of a hate group and doesn’t really offer resistance to the idea.

Captain America delivers the message to John from his father, and leaves as well. 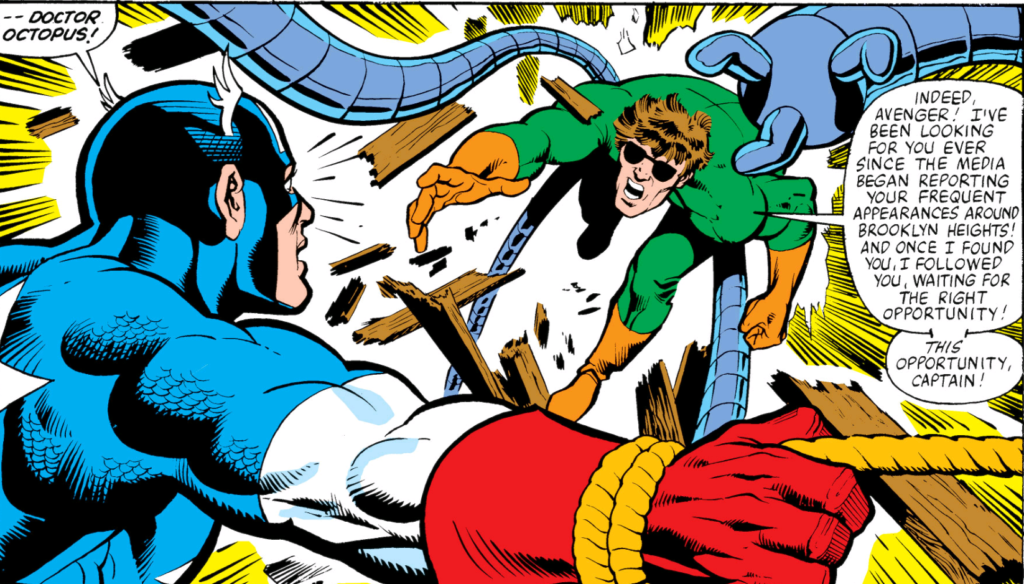 That night, John returns home to his father and apologizes. Ray accepts his son back. In appreciation, John builds Captain America a patriotic motorcycle.

Mike Zeck was a great artist. He had a clean and strong style, which although may not convey the energy and dynamics of other comic artists, he still was/is an extremely talented artist. There is never any doubt visually what is occurring from page to page. Though even with that, the stoicism with which he tends to draw Captain America at points gets repetitive and boring. I can easily forgive all of that with the little touches he gives in the fight with Doctor Octopus, mainly Ock’s hair flopping around with his weird bowl-cut.

This issue was some of David Michelinie’s first work as he wrote the script (Jim Shooter wrote the plot). As such, it is far from his best work. It tends to be a little heavy handed at points even for a comic from this period. There tends to be the exaggerated dialogue boxes explaining the scene, but they lack the over-the-top fun and energy that Stan Lee, Roy Thomas, and others added. He still is able to give glimpses of subtle character moments from Beast talking about a date, Steve Rogers as an artist, and Captain America turning down a beer.

There are some awkward moments and wasted story momentum which cause the front half of this issue to stall and struggle finding it’s pace. 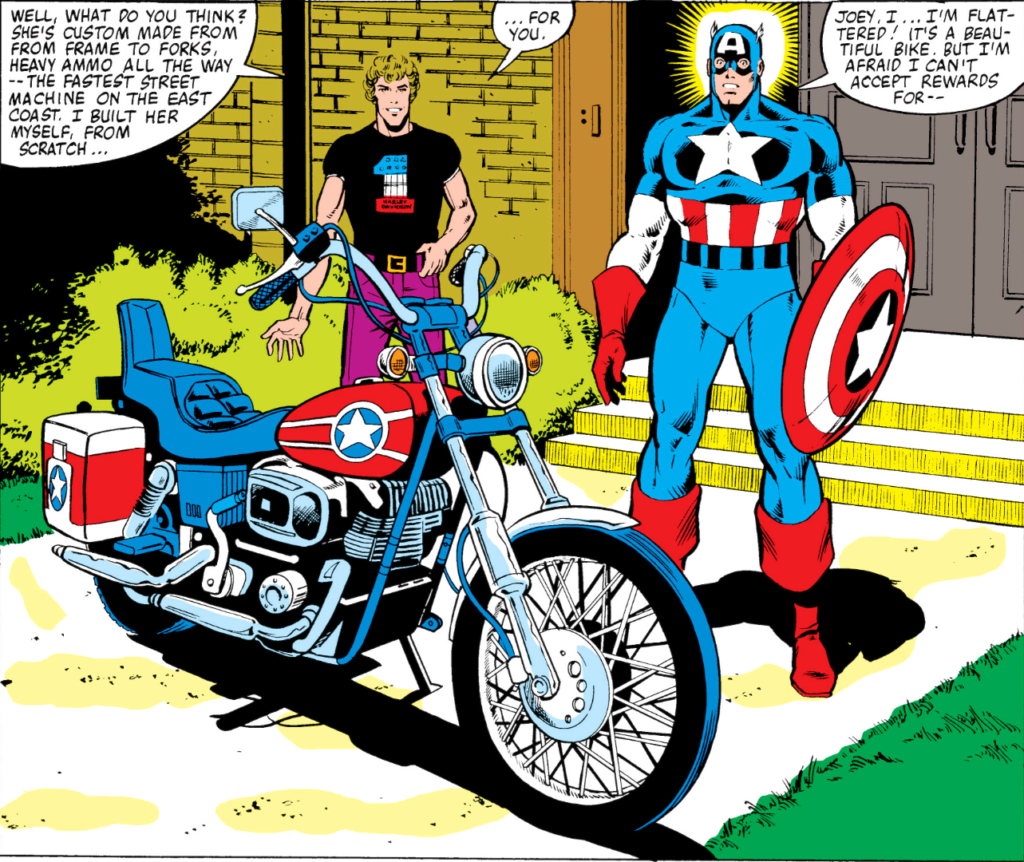 I wouldn’t recommend this to everyone. Big fans of Captain America or Doctor Octopus should without a doubt check it out as it is a fun read. Being that it’s an early Michelinie script, I’d recommend against it to modern readers who want a tryst with older comics. Not bad overall, but definitely not great.