So typically for this column we take a comic book series and decide what actors should play the characters! Who would play a good Darkhawk, Firestar, and Night Thrasher in a New Warriors movie? We answer questions like those! However, today is a new day! I won’t be casting the characters, I’m writing the whole script!! Marvel is making a Spidey movie with Sony and they can use my script- for free!! Here it is folks!

We start out by having Peter Parker as a Junior in High School and this entire movie taking place within that school year.

Coming off the twisted battle of Civil war Spider-Man is torn between what is right and wrong. J. Jonah Jameson uses this to tag Spider-Man as a vigilante who can’t choose a side to be on, and therefore, if you aren’t with them, you are against them! Either way Spider-Man is on the cover of the Daily Bugle

We see Peter Parker start to struggle between his home life and his “hero” life and just when things seem to be cooling down from the Civil War catastrophe, havoc starts to build in his surrounding neighborhood. Seems small at first with convenience store robberies, then bank heist, and even internet hacks. Things start to escalate for Peter when the strip mall behind his house gets attacked and explodes. He sees 4 shadowy figures leave the rubble. So he ensues after making sure Aunt May is safe and sound. As he follows the 4 silhouettes, his Spidey-Sense is going a little haywire, in that it goes in and out only giving the slightest sensation and then stopping. 4 silhouettes become 3. Spidey-Sense is getting stronger but nothing too alarming. 3 become 2. 2 become 1. Spidey-sense is now on full alert…but why?! Spider-Man sees no danger around. The last silhouette enters a building. Spider-Man waits and that’s when he hears it. A nanotech tracker just inches from his head. Too small to see but when he stopped and the quiet took over, it was noticeable and that’s why his Spidey-Senses were tingling, But why full alert now?!

As he keeps track of all exits of the building, he then realizes the 4 silhouettes are now behind him and have known about him following them the entire time. It was a trap!! It’s the WRECKING CREW!!! Bulldozer, Piledriver, Thunderball, and Wrecker! They ambush Spider-Man and all 4 of them are too much for him when he’s caught off guard. They then take him inside and contain him the best they can while one makes a phone call. Man’s voice on the other end of the line tells them to let him go. “It’s not fun to have to hunt something when it’s already caged!” So after they bully and beat up on Spider-Man as a “passage” to leave their holding, Spider-Man takes a detour through the city to make sure he is not to be followed.

Next day at school….

He is questioned by a few students if he is ok because they heard about the explosion next to his house but most barely know he exist. Harry Osborn walks up and doesn’t ask if Peter or Aunt May are ok, he just sits down and starts complaining about his situation. Peter, being about Harry’s only friend, listens as any friend should. Harry talks about his dad and how he’s always working and never sees him. That his dad’s company might be overthrown by the board of trustees, since they control over half of the company’s shares now. As annoying and selfish as Harry can be at times, he’s about the only friend Peter has as well. Plus it doesn’t hurt to have a wealthy friend in times of need.

Now at home after school…

In his room, Peter looks at his tattered costume and decides he could use a change or an upgrade so he calls in a favor to an Avenger or two. He tries Tony Stark but straight to voicemail. Tony actually calls back but it was an accidental butt dial and all you can hear is Tony and Rhodey having a blast. He then tries to call Cap but gets directed to Agent Maria Hill. She helps him out and gives him what he needs to better adapt to the rough and rugged situations of being a “hero”. A new (more well-known) Spider-Man suit is born!

Weeks later… (small montage of Spider-Man not being able to find any crime to fight in his new suit) No sign of the Wrecking Crew either. 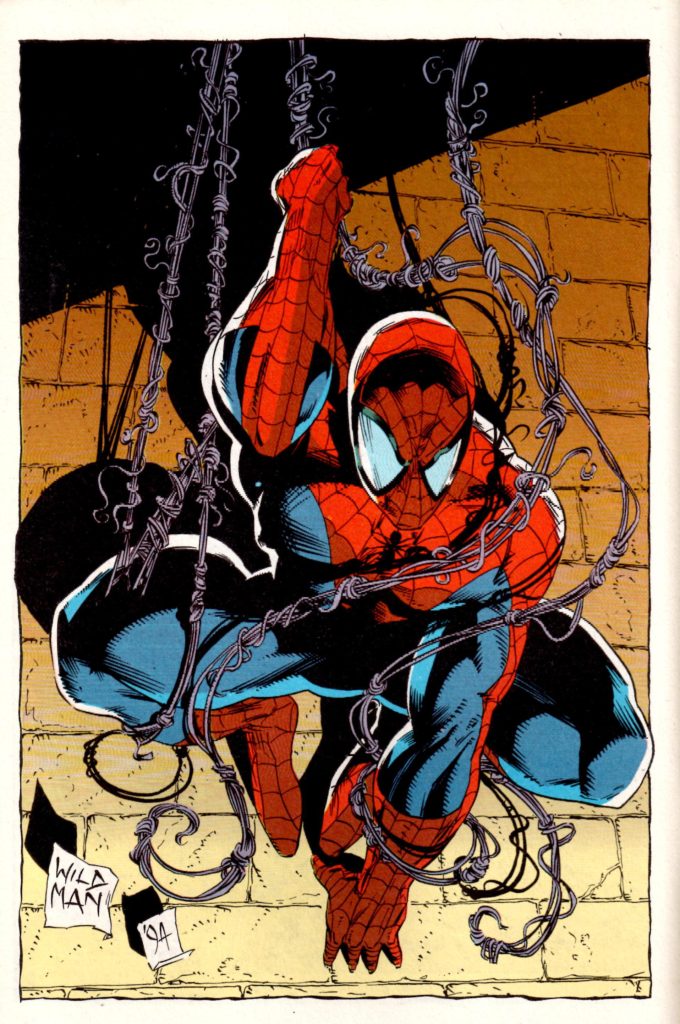 Spider-Man is very bored ever since The Avengers seem to have stopped almost every ounce of crime. So he goes out for a swing and sits atop the city when he notices a car chase in progress. He swings close enough to the chase to where he can hear the police radios. It’s just a small crime so he swings on past and lets the boys in blue handle this one for tonight. He then finds another rooftop to sit on and just watches the chase carry on. But blocks later….BOOM!!!! An armored truck comes out of nowhere and demolishes the burglars car! It’s Bulldozer from the wrecking crew. With Piledriver and Thunderball climbing out of the back of the truck. They take what the burglar had and speed off. It’s about time Spider-Man gets in on some action. Within no time at all Spider-Man is on them like white on rice! He has a big ego since he has an “Avenger” upgraded suit now. Nothing too fancy. Just high grade materials and enhanced tech for his web shooters. 3 out of 4 of the Wrecking Crew are here so he needs to be careful as to not get caught because he might not be so lucky this time around. Huge action packed event takes place and he dismantles 2 out of the 3. Wrecker shows up and it’s a show down in the middle of the street. 2 members of the Wrecking Crew take on Spider-Man. As the battle takes place Spider-Man clearly has the advantage and uses the advantage to beat the crap out his enemies. As he is tying the Crew up he hears someone whistling a child lullaby and his Spider-Sense goes off out of control!! There is no one in the streets and for good reason after that fight. There in the shadows of an alley, he hears a man sing “the itsy bitsy spider crawled up the water spout…..” As this man is singing the song he slowly walks out of the shadows to reveal who he is. None other than Kraven the Hunter! Spider-Man, at this point, has no other choice but to run. There is no way he can take on Kraven after defeating the entire Wrecking Crew. Kraven lets him escape but not before getting up close and personal and giving him a little taste of animal instinct.

That night and the next few days he tries to call the Avengers for help but they are all tied up with issues in Wakanda and off Planet. So it seems it’s up to Spider-Man to step up to the plate and see if he can handle the great responsibility that comes along with great power. Spider-Man goes to the edge of the city and spins a message in web that he will be at a certain location at a certain time and that Kraven needs to be there. Kraven is a no show. Spider-Man does this a few more times but Still nothing from Kraven. Spider-Man even visits the Crew in prison. They know nothing about where Kraven is at any given time. The only communication they had to Kraven was that cell phone which is now in police custody. Remember that Spider-Man doesn’t have that great of a reputation thanks to J. Jonah Jameson. So he either needs to break into the prison or enter the prison as criminal. He plans to break into the prison and as he is doing so, Kraven attacks him. The battle is a viscous one and cops and prison guards are everywhere trying to break it up with their useless loud speakers and laughable taunts. The cops and prison guards are confused as to who to take down. Kraven? Spider-Man? Both?!

The battle continues and it seems Kraven is the stronger of the two. Spider-Man just won’t give up though and tends to be gaining the advantage with his agility and speed. This battle is all over the place. Taking down guard towers, fences, and a few casualties in the process. What they don’t know is that the battle has weakened the walls of the prison and Kraven senses that and throws Spider-Man at the cracked wall and it shatters allowing hundreds of prisoners to escape. While Spider-Man gets side-tracked by trying to capture a few he gets blindsided by Kraven and beats Spider-Man to a pulp. Kraven then raises Spider-Man above his head to taunt the world as helicopters and news vans capture this footage. Spider-Man shoots webbing into Kravens throat which buys him enough time to re-coop and almost suffocates Kraven in the process. “Round 2” starts. Spider-Man comes out the victor but barely escapes the watchful eye of the helicopters and cops/guards through the forest behind the prison.

Weeks later after the end of the school year….

Peter is seen leaving school on the last day of school and being dropped off by Harry and his limo at Peters and Aunt May’s new home. Aunt May has relocated them to a little newer neighborhood but still not the greatest. As Peter is helping Aunt May unload their boxes and items from the moving van, a girl walks out of the house next door (you cannot see her face just a glimpse of the color of her hair. The camera is a shot from over her shoulder showing Peter helping unload) and walks up to Peter, as he has his back is to her, and all you hear her say is “Hey there Tiger!”

Camera frame is showing a black silhouette from mid-chest up. A mysterious figure finds Spider-Man’s tattered mask near the prison in the woods, picks it up, and you hear the start of a high pitch whirl and the guy starts floating. He then takes off and you see smoke coming from what looks to be a glider and you hear a blood curdling, menacing laugh HEE HAHAHAHA HA HA HA!!