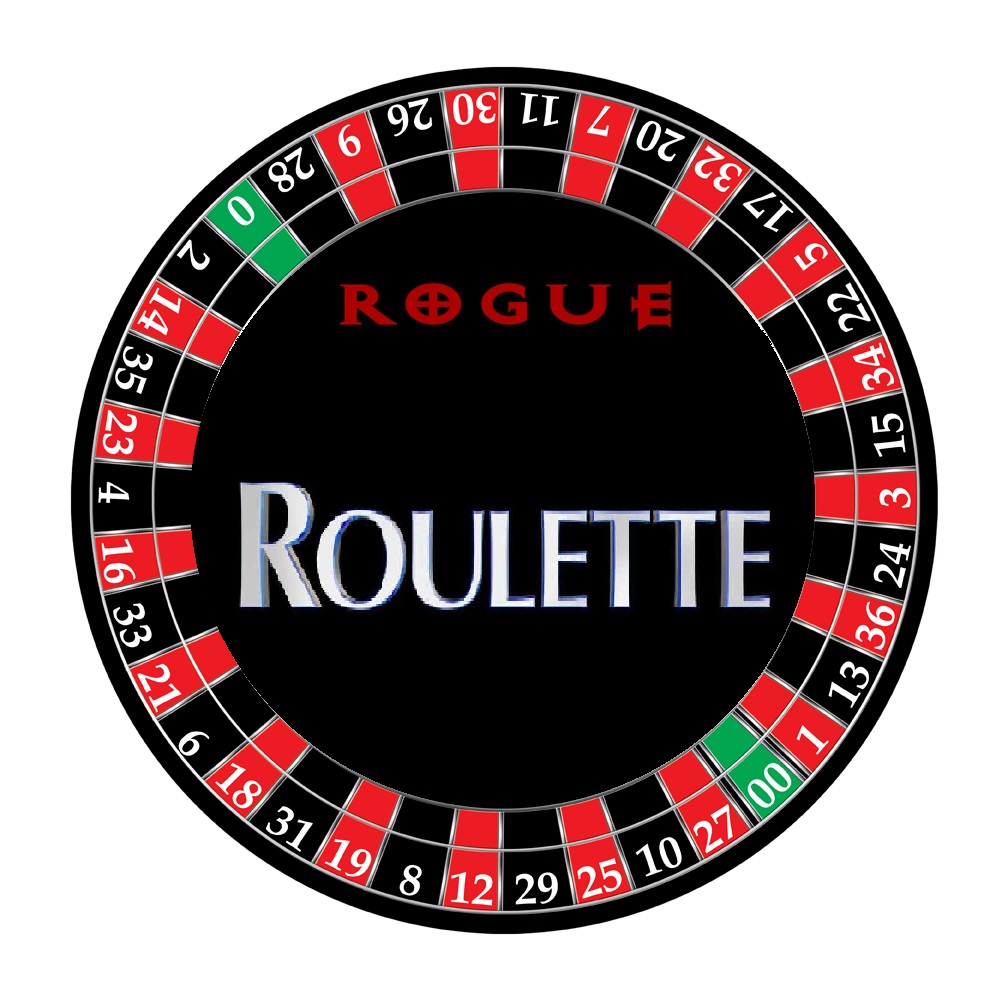 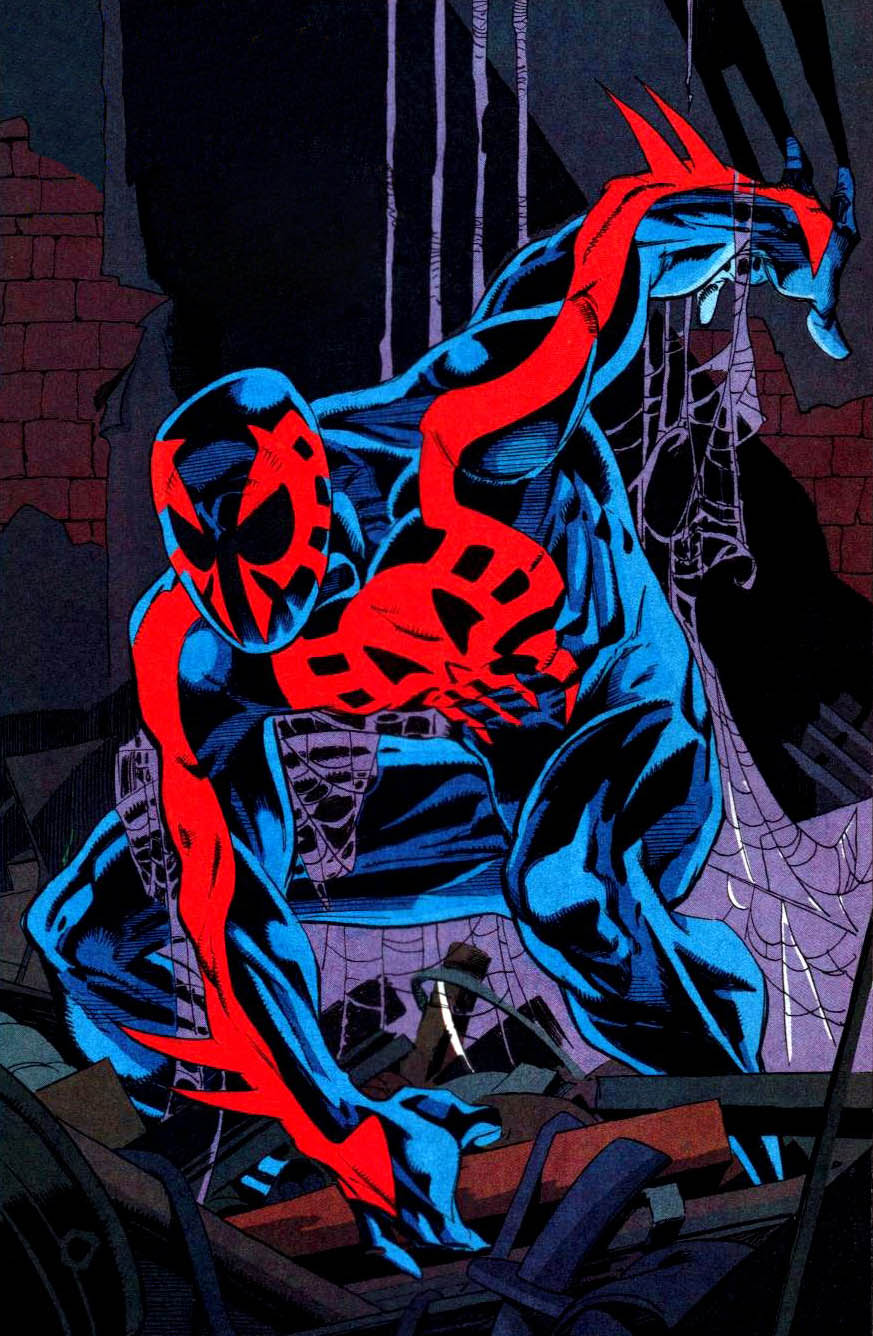 That’s right, fan-faithful of our felicitous formulations here at M6P! Today we’re honoring the fearsome freedom fighter of the future, Spider-Man 2099. For those unfamiliar, back in 1992 (when the year 2099 seemed a fair bit further afield) Miguel O’Hara was one of four founding figures featured in the fledgling 2099 line of comics. With consistently stellar stories scribed by the pen of Peter David the original Spidey 2099 series ran for roughly four years before the 2099 line fell victim to the internal managerial and financial turmoil at Marvel that would lead the company to file for bankruptcy. 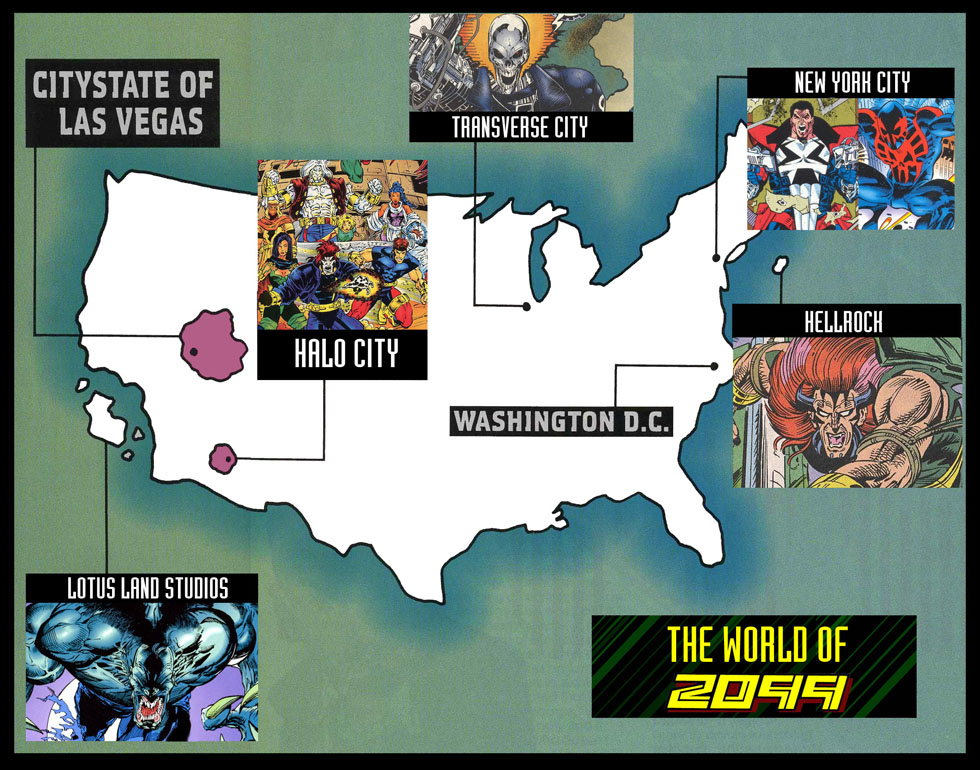 One might assume the tale of Marvel 2099 to be the story of a great saga cut short too soon, but wait . . . what’s that? Yeah! 2099 is back! Everything new that became old, but was originally more new than new is now new again. Doom 2099 has been appearing in the background of Uncanny Avengers for several months (and was at the center of a particularly intense splash page towards the end of last month’s #21) now, and Spider-Man 2099 has returned too. Through space-time shenanigans, Miguel O-Hara found his way to the present era of our beloved Earth-616 where he encountered the Superior Spider-Ock! But, oh Shock! There’s more. Mig is now trapped in the present and hasn’t been able to return to his own time. The upside is we all get to enjoy a brand new solo series written by pioneering Peter David, detailing this spider-fish-out-of-water’s adventures in the here and now. The first issue was a delight and I know like me, you all can’t wait to see what’s around the corner for our buddy Mig!

In his own time and original series Miguel had a full and rich Rogues Gallery that included 2099 versions of the Vulture, Venom, the Green Goblin and a whole slew of unique characters without an OG-Spidey equivalent. Too bad for Peter David and Spider-Man 2099 this colorful cast of criminals is stuck in a future that may or may not ever be. Even the sinister Alchemex Corporation, despotic de facto ruling body of the dystopian Nueva York of Miguel’s native time, is no more than a fledgling start-up company in our era. How is Miguel to have thrilling, interesting adventures without a menagerie of marauders to menace and motivate? Now don’t get me wrong; Peter David is no slouch at devising exciting new villains to harass the heroes whose histories he heralds. Why in his first issue the mischievous Mr. O’Hara has already encountered a dastardly real estate agent, a crass building superintendent, and an agent of T.O.T.E.M. (Temporal Oversight Team Eliminating Mistakes) on a mission to erase him from the time stream. Not bad for a second first issue, Mr. David! But Mig is in our time now, and by Balder I wouldn’t be doing my job if I didn’t offer him some M6P-style assistance by suggesting some pre-existing 616 scourges to spice up the new series! 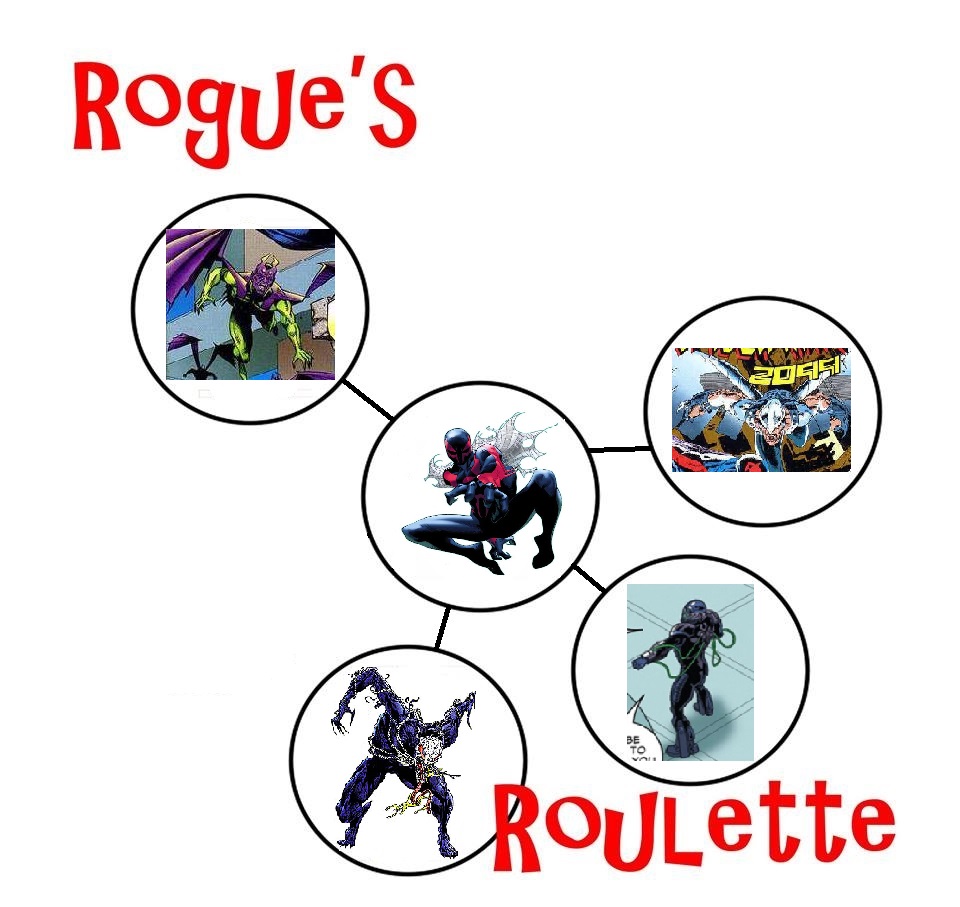 In the dystopian, corporation-ruled 2099 from which he hails it didn’t take long for this new Spider-Man to be viewed as a champion of the people. Even though he can be a bit of a heel in his private life as Miguel O’Hara, as Spider-Man 2099 he definitely lived up to the hype protecting the down-trodden against the predations of both dastardly thugs like the Vulture 2099 and devious organizations like Alchemex and the other Mega-Corporations of his era. Consider now, how Miguel might see the era he has come to reside in: ours. The unemployed, underemployed and sympathetic citizens cry foul against the 1% of the population that controls 40% (and counting) of the world’s wealth. All the while, inertia within government bodies seems, to many, to drive us towards a future like Miguel’s where democratic governments have been replaced by regionally monopolistic mega-corporate oligarchies. Finding himself back in our time Miguel just might see an opportunity to prevent the full-blown corporate despotism borne of unregulated-capitalism-gone-amok future of his past in our present. Wait, what? (Read it again, I swear it makes sense.) 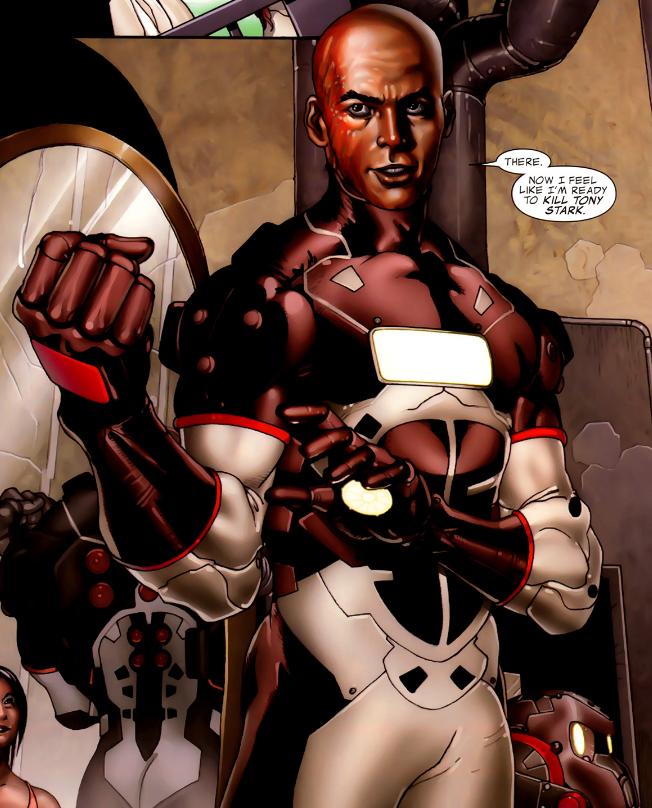 This brings us to our first foe for tomorrow’s web-riding wonder: Ezekiel Stane. For those not in the know Zeke Stane this son of the original Iron Monger, Obidiah Stane, is his father’s son in ambition to power and profit, and in his desire to best Tony Stark. At that, Zeke is far more dangerous than his father ever was. He approaches business with an absolute disregard for the rules, laws, ethics and national boundaries that govern it save when and where they serve to bear him profit. In addition to being a willful economic terrorist Zeke is an innovator and futurist beyond the abilities of Tony Stark. Where Stark and Stane’s own father (and Barney Stinson) would suit-up in their powered armor confront their world’s extraordinary challenges, Zeke has undertaken a re-conformation of his own body to become the suit, directly integrating technologies based on Stark’s repulsor technology weapons into his very physiology. This makes him more than a match for Spider-Man 2099 in the physical realm, while his profit-minded machinations make him both herald and embodiment of the type of a corporation-run world that Miguel O’Hara was born to fight against. 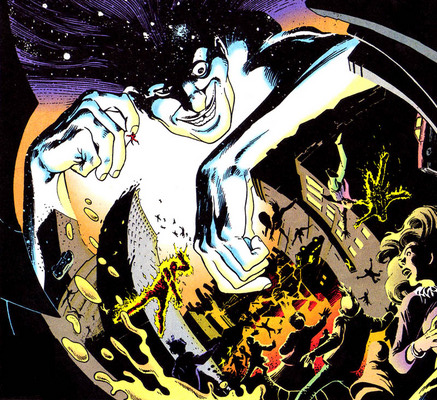 While some rally for the 99% against the 1%, there are others who believe that legislative efforts to further regulate (or re-regulate) business, and redefine the healthcare system and/or tax-code will start us down a path of utter government control; an absolute police state where the death of freedom starts with the death of free enterprise. Well don’t worry I’ve got a foe that represents this type of dystopia to keep Spidey 2099 busy, too. Tell me dear reader, are you familiar with Mad Jim Jaspers? Primarily a foe of Captain Britain, Jim Jaspers made his debut back in 1981. Created by Dave Thorpe and Alan Davis just as the former was leaving the title. The character was picked up by Thorpe’s successor, Alan Mo – *ahem* – I mean, The Original Writer, who revealed that Jaspers was a reality warping, lunatic, mutant who had coupled superhuman abilities with his position in parliament to outlaw superhumans (other than himself) and set up a fascist dictatorship in Britain over which he ruled. (One would almost think The Original Writer inspired himself for a barely known project he began almost a year after this tale, V for something or the other. Hardly anybody’s ever heard of that one, right?)
Now the next part of Jasper’s backstory is important, M616P-ers! Jaspers was deemed so dangerous that the Omniversal authority destroyed his entire reality in order to contain him. The reality the original Jaspers hailed from was that of Earth-238. When Captain Britain was rescued by his patrons Merlyn and Roma from Earth-238 he was sent back to his home reality, that of the one, the only, the first time it was ever named as such in the magnificent Marvel saga, THE EARTH-616! Are you all as excited as I am by this recounting of our most revered of realities got it’s little old name? I know I am . . . as excited as, um, I am . . . *ahem*. Anyway, as it turned out the destruction of Earth-238 and its local Jaspers didn’t solve a blamed thing, no siree. As it turned out Earth-616 had it’s own Jim Jaspers who was on the fast track to discovering his dire powers and following in the footsteps of his other-dimensional predecessor. And he might have gotten away with it too if it weren’t for that darn Captain Britain Corps! Also a bunch of other stuff. In spite of his seeming demise Jasper’s has resurfaced on occasion over the years, mostly in things written by the great Chris Claremont and we never know just how or when the 616-Jaspers or one of his doppelgangers from a distant reality might rear their head.

What was that? Oh, right . . . This article is about Spider-Man 2099. Face front, Durmin!
Hopefully I’ve made clear to you just how scary Jim Jaspers can be. I think, without a doubt, he is one of the finest representatives of a government official with such absolute power and control affecting his dreams in the form of every other sentient being’s living dystopian nightmares. Jaspers is Big Brother, Master Mold, Emperor Palpatine, and the fear of the potential for every elected official that is and may yet be to become a Hitler or Kim Il-Sung combined and granted the power to literally shape reality to his will. Just as I suspect Miguel would bristle at the tactics and trajectory of Zeke Stane, I believe he would be absolutely terrified by the alternative, nightmare future offered by Mad Jim. There’s also something about Jasper’s ability to defy time and space that offers Miguel salvation from his own time-lost situation. Could Jaspers offer Miggy a solution? A way home? But could Miguel O’Hara (who seemed fairly prepared to let a T.O.T.E.M. agent kill Liz Allan in order to save his own skin in this month’s self-titled relaunch) make a deal with a devil like this to see his desire fulfilled? I’m guessing, ultimately, no, but the idea that Jaspers might be able to negotiate with Miguel would make a conflict between them all the more fascinating. Yes, between Jaspers and Zeke Stane Spider-Man 2099 could have his work cut out for him in trying to prevent our present from becoming any number of worst possible futures imaginable. 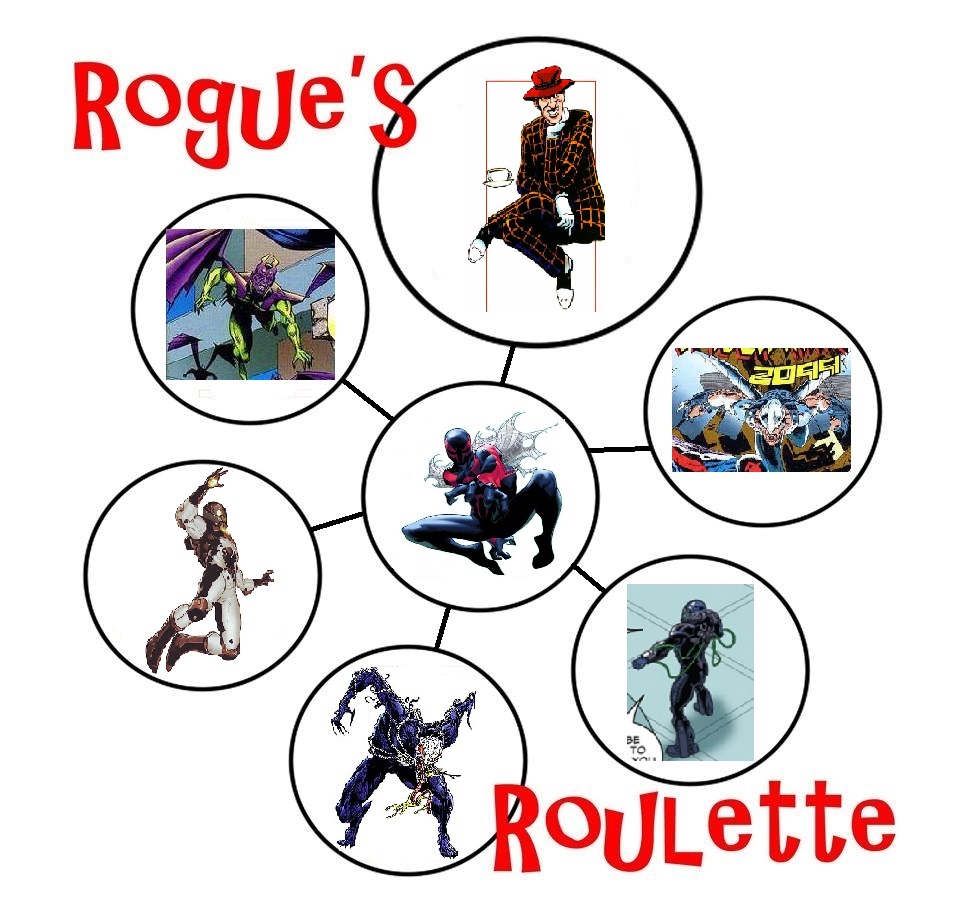 Now seriously, go read Jasper’s Warp if you can find it. It’s out of print, but if you can find the TPB, reprints in a back-issue-bin or at a convention or the Captain Britain Omnibus it’s very good and an essential part of our 616-heritage.