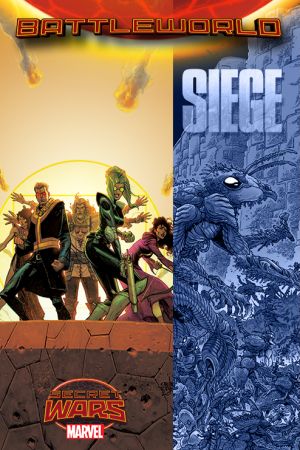 “I was at the Marvel retreat where Jonathan [Hickman] was first explaining the structure of Battleworld,” recalls writer Kieron Gillen. “He reached the Shield, and I pretty much laughed to myself and thinking ‘There’s the story I want to write.’”

From that point, SIEGE fell into place in his mind as part of Secret Wars, something he refers to as the “spiritual sequel” to his late S.W.O.R.D. series.

“I just started extrapolating from what was only a relatively small detail of the world-building, and thinking all the fun you could have with it,” he adds. “The easiest way to sum it up is if the Night’s Watch [from ‘Game of Thrones’] had an even more impossible task, and were recruited from across the entire marvel Multiverse.”

The concept of SIEGE sprawls across various Warzones! of Battleworld, allowing the writer a large canvas on which to paint his adventures.

“The Shield’s purpose is to stop everything that’s south of that point going north of that point,” Gillen explains. “It’s because everything south of the Shield is entirely ungovernable. They don’t pay taxes. They jaywalk. They want to eat you. Being deposited on the Shield is a punishment for a mixture of people who are entirely too battle-hungry or entirely too heroic. It’s deliberately a Sisyphean task, for reasons that I can’t really go into yet. As the series tagline says, ‘They can’t ever win—they can’t afford to lose.’

“Oh yeah—the Shield’s also sentient, but we’ll get to that eventually.”

The cast of SIEGE encompasses a wide spectrum of characters and types, some of whom will appear familiar to Marvel readers and others waiting to take the stage and prove their worth.

“I took [the series] as an opportunity to cast my net widely and grab several—for want of a better phrase—‘Signature Gillen Characters’ and throw them alongside some more characters I’ve loved but never written before, at least significantly. This is very much my ‘Alan-Moore-does-Captain-Britain-Corps’ approach to the multiverse. I could have populated it with known characters from the various timelines but I’ve generally preferred to make up a brand new idea. This is in many ways my hymn to the glory of the Marvel Universe, and that has to be putting a new spin on things rather than simple recapitulation. We all riff on each other, and this is me riffing on everything.

“There’s Abigail Brand. The main difference [from the S.W.O.R.D. series] is that she’s considerably older; 39 or so. There’s Leah of Hel, who is basically a twin-blade warlock Red Sonya character in a full length emerald chainmail. Leah’s best friend is fellow-demon sorceress Illyanna Rasputin, who rides an enormous metallic colossus into battle. The Endless Summers are about 1000 rejected clones from the realm of Baron Sinister, with ruby eyes and fine Jane-Austen-meets-Jack-Kirby outfits. There’s Lady Katherine Bishop, who’s basically Robin Hood and Maid Marian in one purple outfit. Oh, and a couple of UNITs trapped deep beneath the wall and being as sinister as ever. And Miss America, who remains Miss America Chavez.

“In terms of people I’ve never really touched, there’s Nick Fury doing some fine flashback mentor role. Leonardo Da Vinci from S.H.I.E.L.D. in a form where he has four arms and four legs, and is known as the Vitruvian Man. There’s Ben Grimm—now just Grimm—who has a very personal relationship with the Shield. Most of all, there’s Kang, who is Abigail Brand’s new second on the wall and has…something of a personality clash with Abigail. Honestly, I just love writing Kang. I mean both the character and the name. Just writing the word ‘Kang!’ is awesome. Kang! Kang! Kang!”

Positioning Abigail Brand as leader of the Shield defenders presents Gillen new opportunities to continue to flesh out her character, and in a new scenario with major impact on the overall Secret Wars saga.

“Brand ended up as commander on the Shield when Nick Fury went and got himself killed out in the Deadlands,” he notes. “She’s been doing it for six months. She doesn’t sleep much anymore. The job is her meaning for existence.

“The last time the wall had a major failure was about 30 years ago in our history of Battleworld. There have been failures since, but not on the same mass-extinction level scale. In that last multi-million death catastrophe, Abigail Brand’s family was wiped out. She was nine. It took her 20 years to get her deployed to the wall. She’s been there for 10 years. Her aim in life is to make sure what happened to her doesn’t happen to anyone else. She hasn’t time for anything else. Certainly not love. Certainly not after what happened to Hank McCoy.

“But I’m getting ahead of myself.”

SIEGE offers a look at a group of champions under intense pressure stemming from more than one focal point.

“The main source of conflict and the prominent challenge is the entire southern pole of Battleworld that wants to destroy the Shield, everyone on the Shield and then go behind it to not pay taxes, jaywalk and eat everyone,” Gillen says. “Oh yeah—and they’ve got 20 days to live, but that’s another story. Actually, it’s not another story. It’s this story. You know what I mean.”

The writer’s working alongside Filipe Andrade on the book, as well as guest artists each issue to add double-page spreads to punch up the drama even further.

“Filipe has been great,” says Gillen. “He’s adding real energy and imagination, and captured the atmosphere—and this is a book that runs off atmosphere. And personality. And charm. Felipe has masses of all of that. We have four issues to present this tragic little vignette and make everyone fall in love with this world of weirdos, and Felipe is essential to that.

“I have to give credit to editor Jake Thomas for the idea of the double-page spreads. The idea being that every issue we have three spreads by guest artists, each which tells a single vignette of an attack on the Shield, with the artist picked to really try and capture something of the majesty, horror or wonder of that moment. It’s a great idea, that I’d have never had suggested to an editor, because that basically translates to ‘You know that impossible job you already do? Well, how about adding a mass more work organizing another 12 people to it.’ Actually, I lie. It’s only 11, as Filipe does one of the first issue’s spreads. Anyway, I’d have never had suggested it, but as Jake was foolish enough to suggested it I grabbed it before he could change his mind.

“In a similar way that this is letting me play with characters I’ve never written before, this is also a great chance for me to have a two- page dalliance with artist people I’ve never written for. Like, oh, James Stokoe. We’ll always have Paris, and when I say ‘Paris’ I mean ‘An attack on the Shield by a chitinous mass of strangely familiar ants.’ Stokoe is the fifth force of nature as far as I’m concerned. The strong force, the weak force, electromagnetism, gravity and Stokoe. That’s how it goes.”