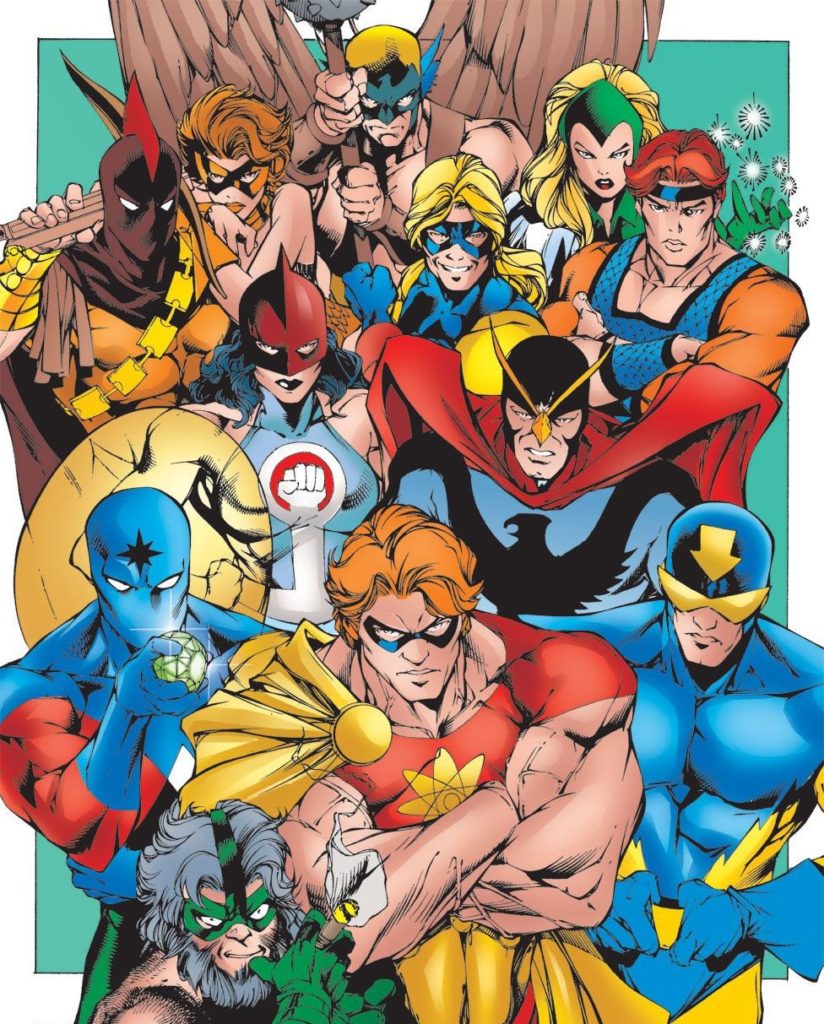 Starting with Avengers #70 in 1969, Marvel introduced the fictitious team of the Squadron Sinister. This was a villainous group which intentionally resembled DC’s core Justice League members. It also reiterated Stan Lee’s good-humored pokes and prods from his editorial Soapbox column to what he referred to as Marvel’s Distinguished Competitor. To this day this undercurrent of ribbings at each other continues even with the first issue of DC’s latest series Multiversity.

To start off, it should be noted the difference when comic companies mock each other or when they blatantly rip-off each other. Going all the way back to the Golden Age of comics, it was incredibly common for one publisher to see a successful character at another company and have his artists and writers come up with a similar idea. In this way Batman’s first stories bare resemblances to many previously published pulp vigilantes and Captain America is similar to several patriotic heroes which were also published before him. There are also instances where fans of one hero believe another hero is a blatant rip-off when it was actually an original idea. The best example of this is those who claim Moon Knight is a copy of Batman. If you know anyone who claims this it is proof that they have never read a single Moon Knight story. This is also true for those who think Uncle Sam was a Captain America rip-off. 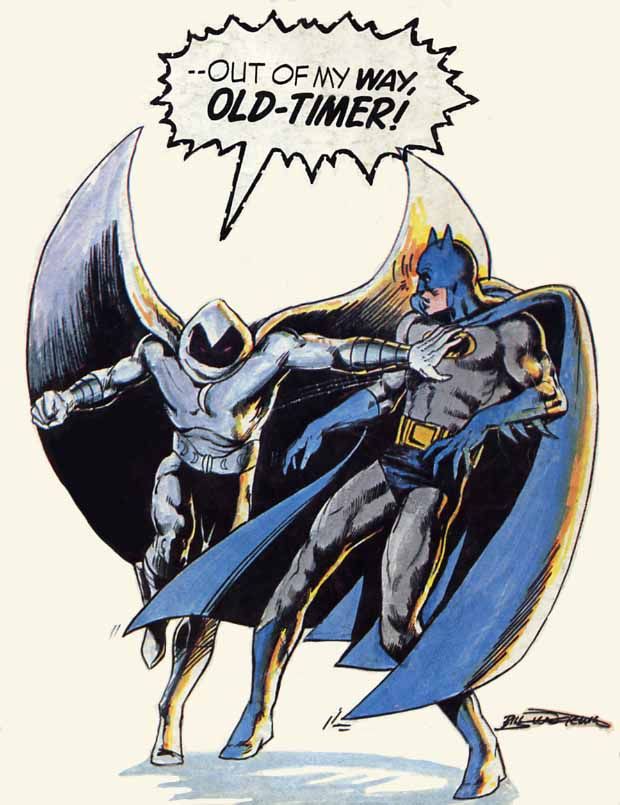 What I want to talk about are the instances where Marvel has blatantly copied DC (and vice versa) intentionally. Generally this is done with a nod and a wink to the reader and not as a malicious attack. However in one instance it ended up creating a humorless but amazing story.

I already mentioned above the DC counterparts first appeared in the Marvel universe as villains. This storyline (created by comic legend and icon Roy Thomas) was an obvious in-joke with the fans that Marvel was better than the villainous DC. The original Squadron Sinister was composed of Hyperion (Superman), Nighthawk (Batman), Whizzer (The Flash), and Doctor Spectrum (Green Lantern). They were created by a character called The Grandmaster to fight the Avengers. It was later revealed that they were created based on heroes from Earth-712: The Squadron Supreme. These characters first appeared in Avengers #85. In addition to heroic versions of the above mentioned characters Amphibian (Aquaman), Power Princess (Wonder Woman), Skurllian Skymaster (Martian Manhunter), Arcanna (Zantanna), Golden Archer (Green Arrow), Tom Thumb (The Atom), Blue Eagle (Hawkman), and Lady Lark (Black Canary) among many others were later introduced. While this second incarnation isn’t necessarily a humorous slant on the characters, it interestingly became a very Marvel retelling of DC’s heroes by making them much more psychologically and morally complex than many of DC’s heroes had been represented up to that point. They eventually received a twelve part limited series by Mark Gruenwald whose storyline is surprisingly similar in certain respects to the history DC’s Crime Syndicate of America, an alternate universe evil Justice League for those of you who don’t read DC.

Potentially the most profound use of these characters was under the MAX imprint with J. Michael Strazcynski’s Supreme Power series. This was an adult retelling of the Squadron Supreme characters that was often violent and brutal. If you are over 17 and adult subject matter does not bother you, I cannot highly recommend this series enough.

With Marvel’s exploration of DC’s characters out of the way, DC has also had its fair share of rendering the Marvel Universe. To completely understand this, first you have to understand the DC multiverse which they’ve made far more complex than it should be (this is a Marvel Fansite! Did you think I was going to be completely nice to DC?). This can all be attributed to the lack of a Stan Lee type writer/editor during their Silver Age. Marvel built their comics (and by Marvel this was Stan Lee’s doing) around continuity. The stories built on each other and the heroes live in the same world, interact, and things have a natural progression. DC did not have this throughout their comics. Their silver age tales were much more scattered all over the place with little continuity and characters whose tones and personalities would shift dramatically based on the writer. They attempted to correct this with their first reboot in the 80’s, Crisis on Infinite Earths. Later in the 2000’s, with Infinite Crisis DC brought back certain parts of their previously confusing Multiverse, and recently with Grant Morrison’s Multiversity have brought it back again after their latest reboot, New 52.

Pre-Crisis on Infinite Earths there was an alternate Earth called Angor which was later deemed Earth 8 in post-Infinite Crisis and in the New 52. This first appeared in Justice League of America #71 in 1969 (same year as the Sinister Squadron first appeared). Angor had a team called the Champions of Angor who consisted of Jack B Quick (Quicksilver), Blue Jay (Ant Man), Silver Sorceress (Scarlet Witch), and Wandjina (Thor). They were originally part of The Assemblers who were too interested in fame to be heroes. Earth 8 would later introduce other heroes and villains on Angor, the latest of which are Behemoth (Hulk), American Crusader (Captain America), The Future Family (Fantastic Four), Lord Havok (Doctor Doom), and many others with more surely to come. 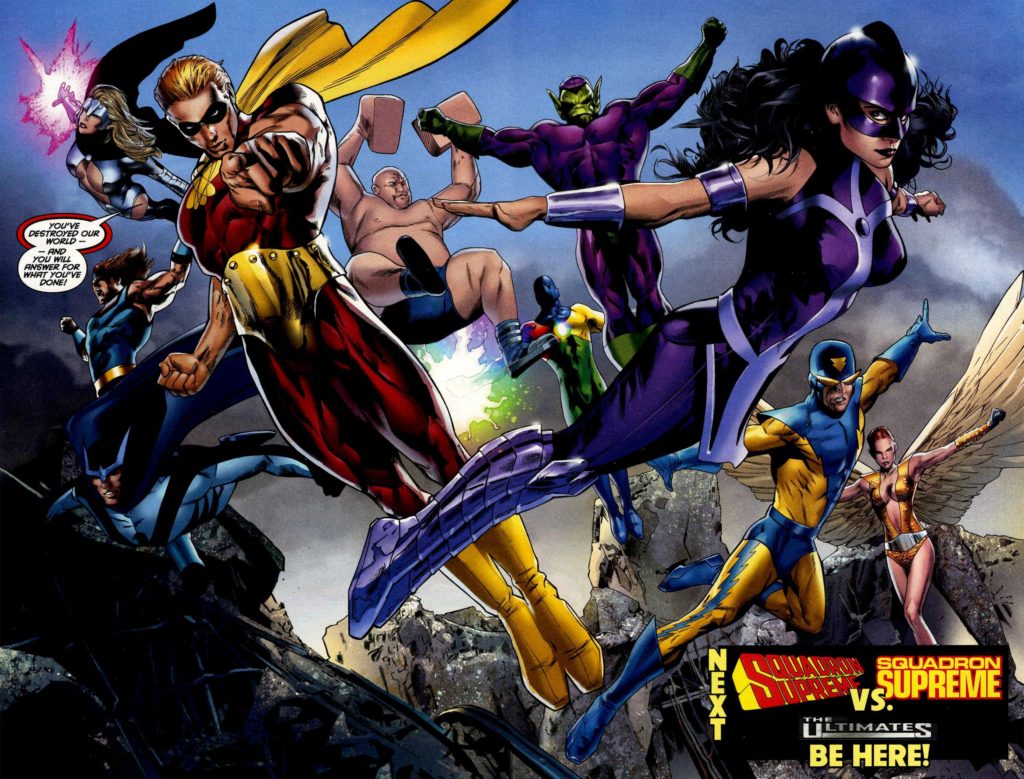 Being that both of those stories came out around the same time, it is important to understand that Martin Goodwin (Marvel owner and publisher) and DC’s owner and publisher would regularly play golf. Both men owned several magazines and publishing companies, and as the played golf in the 50’s and 60’s they would talk shop. This is one of the reasons that Marvel even entered into superhero comics, because they were selling well for DC. It is hard to say, but it is extremely likely that these men had something to do with both the Squadron Sinister and the Champions of Angor being that possibly one mentioned to the other the storyline and the other ran back and told their company to do something similar. This is all a theory, but likely, and I’m merely pointing out it is difficult to say which one actually came up with the idea first especially since they were both published the same year.

These characters originally created for farce have been around for 45 years and continue to develop and have new stories surround them. It is impossible to think we have seen the end of them. The Squadron Supreme currently has their own series as well as solo titles for various members of the team.

These characters have become beloved additions to each company’s continuity and storytelling history, and only continue to prove that while you may have your loyalties to one publisher, a great character is a great character regardless.