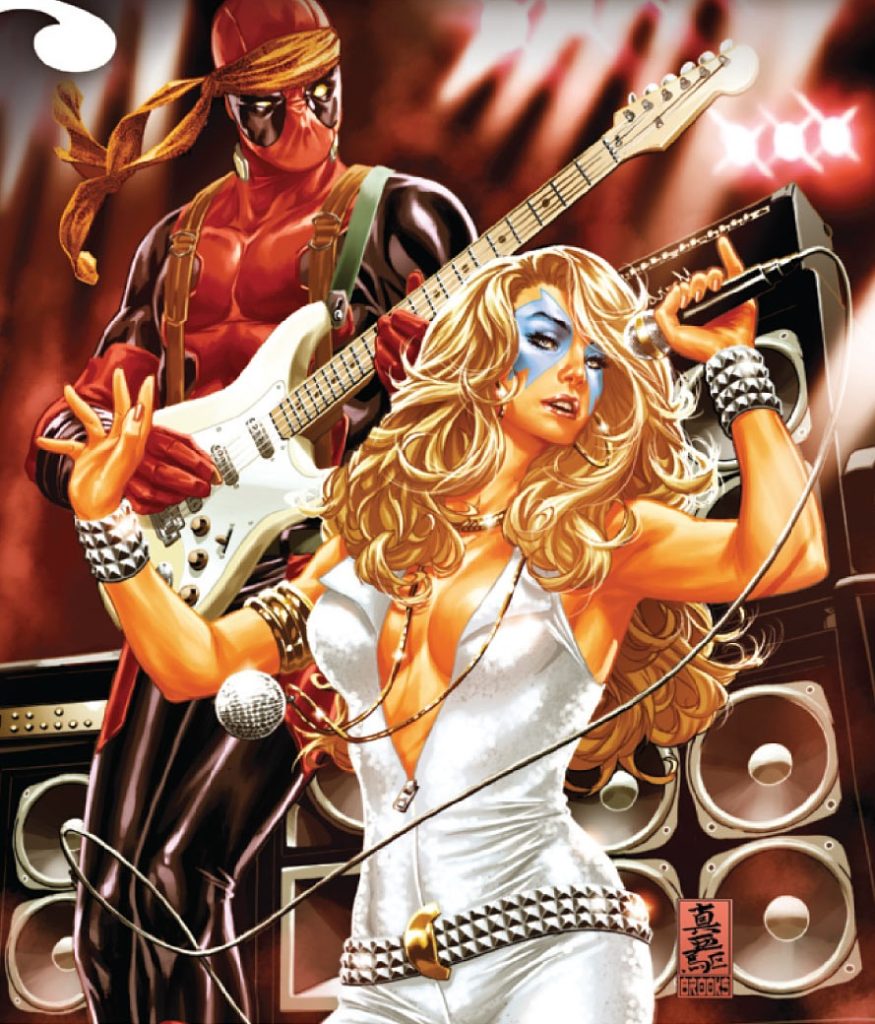 By Kevin McVicker and Jon Durmin

Kevin – For this list Jon and I ranked fifteen songs which reference Marvel in our individual top ten, purely based on our opinions.

Kevin – Right, and my opinion is most correct.

Jon – While every song received at least one vote, five sadly could not make the top ten because who wants to read a top fifteen?

Kevin – Actually we are just too lazy to remove our socks and count higher. Look! We’re old men . . .

Jon – Which probably explains some of our choices . . .

Kevin – Exactly! So before we give you the REAL Top Ten here are your five honorable mentions.

Ramsey Lewis – What’s the Name of This Funk (Spider-Man)

The Cure – Lullaby (wherein the name “Spider-Man” is repeated again and again . . .)

Kevin – They’re out there. It’s worth noting them, but they aren’t so high up our list as to warrant a link. 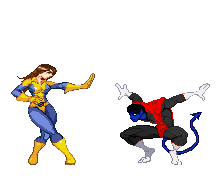 Kevin – A nerd anthem if there ever was one, In My Garage is an ode to all of the things that I too felt a great affinity for in my high school days: rock music, D&D, and comic books. From referencing the stupid songs he wrote to his 12-sided die, Rivers Cuomo created a song that made it cool to be a nerd especially thanks to the fact that this album also contained their three early hits that all the cool people were singing (Say It Ain’t So, The Sweater Song, and Buddy Holly).

I’ve got a Dungeon Master’s Guide
I’ve got a 12-sided die
I’ve got Kitty Pryde
And Nightcrawler too
Waiting there for me
Yes I do, I do

Jon – Kevin and I agree that Bowie is bar-none one of the greatest entertainers and musicians of all time. Bowie is, in his way, a superhero among musicians, having performed under a multitude of identities from Aladdin Sane to Ziggy Stardust.  Heck, he even had a secret identity having been born and started his career as folk and blues performer David Robert Jones before transitioning to David Bowie (around the time of an incident that left him with different colored irises, what an origin story!). And then of course there’s Major Tom; y’see among . . .

Jon– sigh, fine. I’ll hold off on going down THAT Analogies to Amaze grade, Morrisonian rabbit-hole. However, in Blackstar we have, among Bowie’s body of work, a perfect coda to the whole of his career. It is almost literally a self-written and performed eulogy composed as the title track of the final album of a man with a terminal illness who knew this would be his final work. The song feels like a Jim Starlin epic, as though the Death of Captain Marvel were autobiographical, and the music video (released the day Bowie died) is visually evocative of the same. Furthermore, Bowie actually calls out Marvel in the lyrics, using the term “Marvel Star” to represent the idea of a superhero (which he states he is not).

Kevin – A bit of a cheat, but still one that I feel is a shame to not include on this list, this is the first of two cover songs to rank in our top ten. It’s slightly shady, given that I’m going by Wikipedia for this information, but it may have first appeared as a secret song on the Ramones’ twelfth album, Mondo Bizzaro, or possibly as a hidden track on their final studio album, Adios Amigos, or (if you’re me) you may have first heard this on the compilation album Cartoons’ Greatest Hits along with Helmet covering the theme from Gigantor (kids, ask your parents about Gigantor and then ask your cool, younger uncle about Helmet). It was written by Paul Francis Webster and Bob Harris (not Bob Harras) back in 1967 for the Amazing Spider-Man cartoon, but the Ramones helped re-popularize this icon song for an entirely new generation.

Is he strong? Listen Bud!

He’s got radioactive blood!
Can he swing from a thread?

Take a look overhead.
Hey, there! There goes the Spider-Man.

Jon – Okay, this is just a darn fine, energetic song by a very geek friendly band. The track feels like something to which X-51, aka Machine Man, the Jack Kirby creation called out in the title, might battle a horde of alien invaders. That the song makes reference to a “Push button man . . . on an odyssey in search of a soul” is particularly evocative of the titular hero (fun-fact! X-51 first appeared in the last several issues of Jack Kirby’s adaptation of the book/film 2001: A Space Odyssey for Marvel, ever linking Arthur C. Clarke’s Sci-Fi epic to Marvel continuity. I’m still waiting for that HAL-9000 vs. Ultron story . . .).

let’s go, I know the son of X-51
and so, you’ll know your time has only begun

Jon – I fought for this song to be on the list against all McVicker-ly ambivalence because I LOVE this song, and I love the featured vocalist. If you want to know what Jolly Jon Durmin listens to while writing the favorite features of The M6P look no further! I’ll admit that lyrically it’s a stretch to call this a song about Marvel. The space it occupies on Nightcrawler’s album “Metropolis” as part of a narrative about post-apocalyptic survivors in the last city on Earth is ripe material for many a Marvel story. Beyond the lyrics though, everything else about this song screams Marvel in general, and the X-Men in particular. You’ve got a band named after one X-Man (Nightcrawler, the BEST X-Man), with a title evoking another X-Man (Evan Sabah Nur aka Genesis aka Apocalypse Jr) featuring vocals by a woman whose stage name evokes yet a third X-Man (Jean “Phoenix” Grey) and is, I kid you not, the real-life, Earth-33 incarnation (read your Morrison people) of none-other than a fourth X-Man, Dazzler.

Now if you still don’t buy that this deserves to be on the list, well we’ve got a treat for you. If you’re a fan of the early 90’s Fox X-Men Animated Series, you might enjoy this fan-made music video. Check it out True Believers!

Body up, up I know I learned true love because you is someone to turn to
You’re the one that I turn to (Jon – okay, what did I just say about the lyrics?) 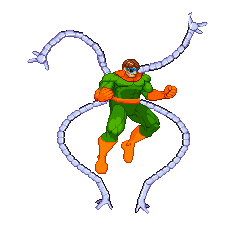 Kevin – Enough of Durmin’s perverse love of Synth-Pop! Released in 1997, this is a rap song which features characters from the 616 battling rappers like Redman, Common, KRS-One, and Busta Rhymes. There was a sequel to this song (Secret Wars Part 2) that also came out in 2003. There may be some contention with this song even being on the list since the rappers are able to all single handedly take down a Marvel character (or in Redman’s case two with Hulk and The Thing). But to be fair, there isn’t much point in creating a beef with another rapper by having them lose to the imaginary literary figure Doctor Strange. Still, the lyrics and references in this song make for an extremely fun listen especially if you have some semblance of understanding in both comics and the rap industry.

We got Dr. Octopus versus the mighty Busta Rhymes!
Doc Oct versus Busta? Man that stuff is dead
He’ll get his eight arms ripped off, going up against the dreads 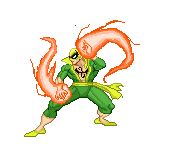 Jon – Not an homage to the character with whom it shares its name, nonetheless Motorhead’s Iron Fist is a fast, fun, and kung-fu-furious song perfectly suited to the highly-kinetic combat one expects from the Martial Arts Marvel from K’un L’un. There’s little more to say about this masterpiece of metal than to tell you to click the link and take a listen. Seriously, if Marvel & Netflix fail to license this tune for the upcoming Iron Fist series they will have missed an unparalleled opportunity in media synergy. 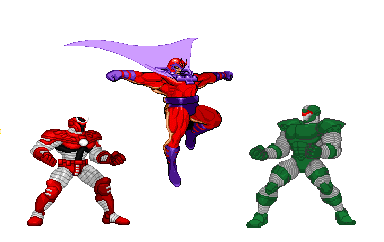 Jon – With Magneto and the Titanium Man Paul McCartney, yes, the Beatles’ Paul McCartney, outed himself as a comic book geek with this B-Side track. These days geek is pretty chic, but in the mid-70’s this was a pretty radical move by McCartney. Not content to merely tuck the track in the back of the #1 album that featured it (Venus and Mars/Rock Show), McCartney invited Jack Kirby and his family (co-creator of Magneto) to the L.A. show of his 1975-76 tour as honored guests. Kirby thanked McCartney with a portrait of he and his wife Linda. The song lives on, with our present big-screen Magneto, Michael Fassbender, using it as entry music when he appears on talk shows to promote new projects.

So We Went Out
Magneto And Titanium Man . . .
And The Crimson Dynamo
Came Along For The Ride

This is the second cover on the list being that it was originally written and performed by the band “Suicide.” This song not only gets points for being explicitly about the character which the song is titled after (unlike Iron Man by Black Sabbath), but this version of the song actually appeared on the soundtrack for an entirely different comic book character: The Crow. Eric Draven ended up having to share his soundtrack billing with Marvel’s premiere demonically possessed superhero. To top it all off, having Henry Rollins’ sullen yet still angry growl belting out lyrics about how cute one of the darker heroes of the 616 helps to make this an iconic and wonderful song.

Back in the 90’s there was a record company called Tooth & Nail. It was the somewhat Christian equivalent of Ian MacKaye’s Dischord Records. There were bands on there that became semipopular like MXPX, the Supertones, Underoath, Starflyer 59, P.O.D., Pedro the Lion, and many others. I was a fan of this label to say the least since I grew up in a somewhat repressive musical household, and as much as my parents hated my music I could always say, “But I got it at the Christian Book Store.” One of the later 90’s intros to this label was FutherMore who was a hip-hop group consisting of Fischer and Lee, a co-ed Christian rap group. They really weren’t that great, to be honest. At least, not to me, but I’m extremely picky on my hip-hop and typically think if Del tha Funky Homosapien isn’t involved it probably isn’t that great. On the group’s debut album, Fluorescent Jellyfish, their final song was Melted Vinyl. Why is this song by a band I’m not entirely fond of making it to number one on this list? Because no other song in the entirety of music history references as many Marvel Characters as this song does. The concept of the song is that they have extra room on their album since they didn’t write enough songs, so they are burning space by talking about Marvel Comics. It is brilliant, fun, well performed, and packed with references. So listen to it and see if you agree with our number one pick.

I’m sure Psylocke will save them