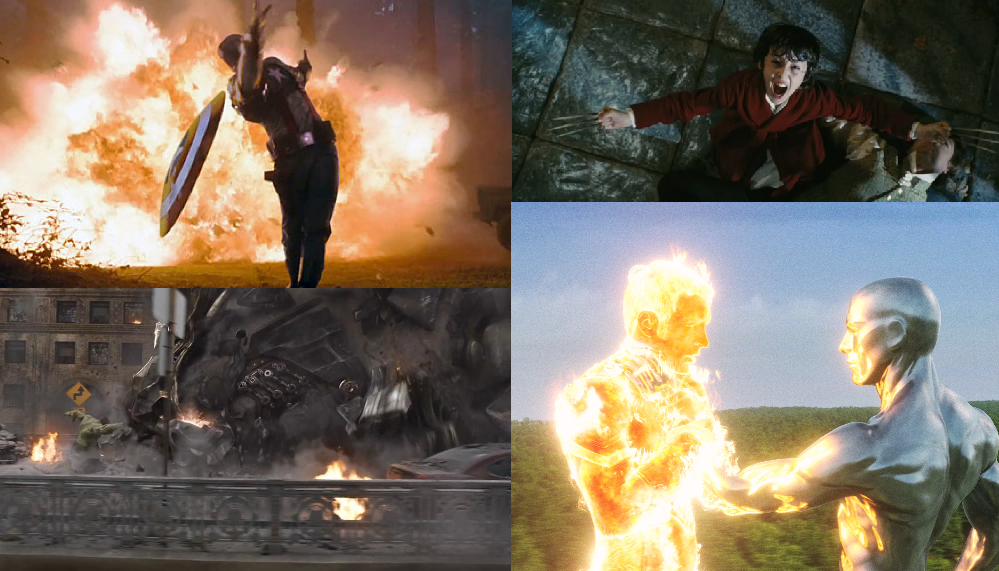 You’ve paid an exorbitant fee for your ticket, you bought an overpriced dehydration inducing bucket of salt, butter, and starch along with a drink containing an inopportune bladder filling liquid, and you’ve been forced by an overbooked theater to sit next to a lactose intolerant, arm-rest monopolizing geek who seems to have spent the past week gorging on ice cream in lieu of bathing. What’s the point? Why are you here? What makes this worth your repetitively masochistic behavior?

These are the moments that make the suffering worth it all. In celebration of those instances of grief-omitting joy, here is a top ten look at the greatest moments in Marvel Comics at the big screen.

Iron Man 3 – Armors to the Rescue

Punisher – Vs the Russian

Iron Man doesn’t get to be a hero in his own films. His first two movies are the legal equivalent to the “stand your ground” law where he’s just protecting himself and what’s his, while the third Iron Man is basically a remake of Pee Wee’s Big Adventure with Pepper being the bicycle. He’s not really a hero in his movies. Protagonist, yes, but not the protector of the innocent lives. The Avengers movies give him that chance, and this scene from Age of Ultron is maybe the clearest example. This scene is a clear argument against the wanton destruction leveled against Metropolis in Man of Steel (as I believe the entire film is an argument against), and this is mainly shown through Tony Stark actually being a hero. He could brawl and maybe even beat the Hulk, but at the cost of what lives? He chooses instead a near life-costing choice for himself by focusing on the collateral damage and moving the fight away from potential harm to civilians. All of that is good on its own, but to top it off, this is an awesome scene. Possibly the best moments of the Hulk brought to life as well as the most heroic moments of Iron Man are here.

This movie had a clean slate to work from being one of the first respectably budgeted films produced from a Marvel property. No one knew what to expect, but in the first ten minutes you were left without a doubt to the film you were about to watch. Blade comes into a dance party that’s doubling as a vampire feeding frenzy and shows why the Daywalker is a monster to the monsters with a dazzling display of his fighting techniques and silver coated weaponry. With quick editing, a thin layer of blood covering everything, and vampires turning to ash at every corner, this was the slick opening moment every action movie wants and tries to create. 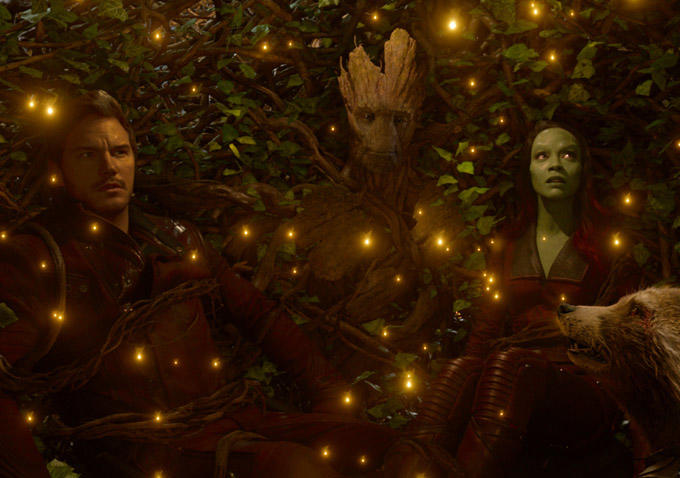 Unlike most every other entry on this list, this is not a cinematic moment that’s flashy and exciting, but rather one of the more surprisingly emotional moments in all of comic book cinema. Groot, in an attempt to save his follow Guardians as their vessel crashes into the Nova Corp home-world, makes the ultimate sacrifice (presumably, but we know better) and simply utters, “We Are Groot” to an emotionally distraught raccoon. On the surface, a tree using a plural first person pronoun when talking to a medium-sized mammal sounds less like an emotional cinematic moment and more like one that even David Lynch would consider too weird for his movies. However there is a beauty captured in this moment that represents the actual cohesion and team creation the entire movie had been building towards. If there is a zero point in the origin story that signifies the actual formation of the Guardians of the Galaxy, I strongly believe it to be that line. In a direct dichotomy to the Avengers whose team culmination was an epic and heroic 360 degree camera shot, this was just a simple and somber moment. 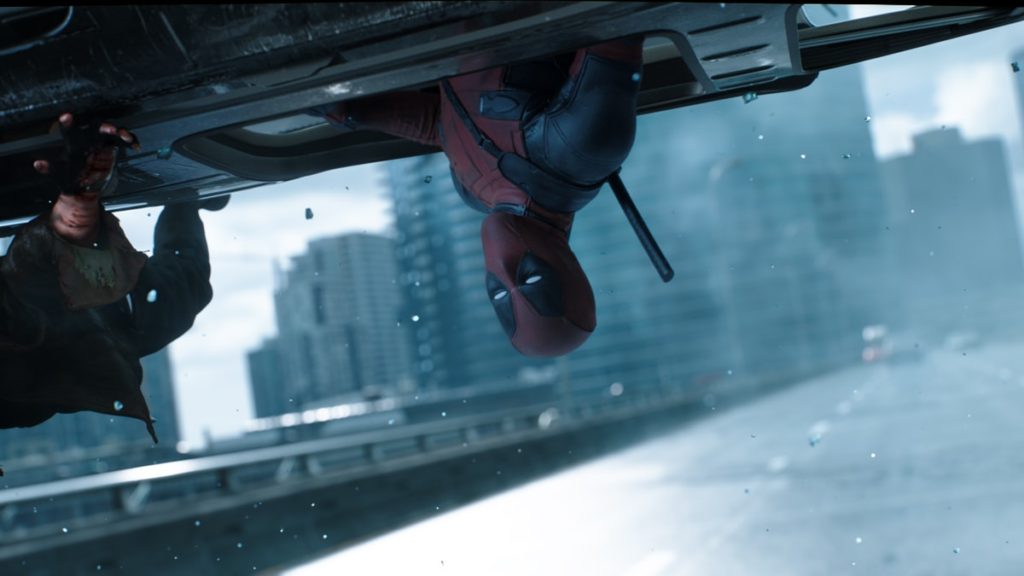 Not much was added except for the overpass ending from what we had originally seen over a year earlier in the leaked VFX sizzle reel which made it onto the Internet the way dams leak in disaster films. Deadpool is listening to Salt N Pepper and dives feet first off a complex highway interchange system through the moon-roof of a passing SUV filled with bad guys. The bad guys die with gusto through a series of violent, comically timed gags culminating in what I believe to be the only poop joke in a superhero film.

In what I would argue to be a mediocre movie over-all, one scene, in fact one character, rises above the rest and steals the show. At a point in the movie where the team has to rescue Magneto from the Pentagon jail cell (because apparently an Omega Level mutant with magnetic powers is too weak to alter the trajectory of a bullet; I have so many issues with this movie), Evan Peters rises above the material in terms of charisma and the VFX department treats us to a view of the world through Quicksilver’s eyes. The slowed down speed paired with the classic Jim Croce song create a true cinematic treat which then climaxes in a rapid, true-time succession of a Rube Goldberg series of events created by Quicksilver. This scene is only slightly marred by the subsequent scene which has the X-Men (kind of) make the most tactically idiotic choice in movie history by sending Pietro packing.

Some may argue that this scene isn’t as spectacular as the final Helicarrier battle at the end of this movie, but from the moment Sitwell is thrown into on-coming traffic by the Winter Soldier to the ultimate reveal that was no surprise to comic fans, this really is a phenomenal sequence of action. In other non-comic book related movies, this portion of the film is along the lines of the bank heist from Heat. It is non-stop, intense action that suspends your disbelief enough to legitimately worry about the heroes’ lives. Everything is topped off by one of the greatest hand-to-hand fight scenes in modern America cinema, only to possibly be surpassed by the climatic third act fight of this movie’s predecessor. There are intricacies in the knife play of this fight that are so fun to watch and rewatch. The choreography of the scene along with the talent of the actors and the stunt people to accomplish that scene is amazing. In understanding the amount of people and the quantity of time it takes to create a scene like this, there really is a secondary level of awe and love just on the pure practical (as opposed to CGI) nature of it. This is not just a great cinematic moment, this is film making at its finest.

At the time the first X-Men movie came, there was nothing else like it, and we were all shocked by how well it was (unrelated to how well it stood the test of time). But that movie raised the bar for what we expected from the second movie. I remember knowing that Nightcrawler was in X2 before it came out but that was about it. When the opening starts with a guided tour in the White House, I had no idea to what amazing extent they would actually be using Nightcrawler. And, truth be told, maybe after this scene he was never really used as well as in the opener, but that’s okay. This moment grabbed us, and showed everything we wanted to see out of our favorite blue elf, as he teleport and BAMF’d his way through the secret service only to hand himself a knife with his own tail. It’s the little things tacked on to the amazing action pieces that can be so much fun in these movies. One of the best things about this sequence is that it really does still stand the test of time, as this movie does for the most part.

In many ways this scene is the first major comic book moment ever to come to life cinematically. Some may argue that Spider-Man with the Green Goblin fight or the Magneto fight in X-Men was actually that, but those are both relatively boring and uneventful compare to this moment. This is the first moment that the panel-to-panel action you had been filling in between your entire life finally came to fruition. This fight scene, jumping from a building battle to an above ground train, back up to a building, back doing to the train and culminating in a wonderful (if not sadly mocked and meme’d) heroic sacrifice was the first time anything like this ever happened in a film: a true classic battle between a superhero and a supervillain. Doctor Octopus’s ruthless fight against Spider-Man will go down as a moment of classic cinema. And if the initial release wasn’t enough, there was an extended release of Spider-Man 2 which featured an additional 90 seconds in this fight scene alone.

For this entry, I had to figure out which scene from the film I really wanted to add to the list. This movie has several stand-out big cinematic moments. From the opening sequence, to the on foot car chase sequence, to the airport fight, and then the emotionally and physically brutal “he killed my mom” final fight scene, this movie is packed with great moments. When I think about this movie, as great as all the scenes were, I’m fairly positive I was uncontrollably grinning like an idiot from the moment Spider-Man stole Captain America’s shield and I’m not sure I stopped until War Machine was accidentally hit by Vision. The scene is an amazing six on six royal rumble, where everyone gets their moments (except maybe Hawkeye who I think proved that maybe retirement was a good call for him). The greatest moments are probably Cap and Black Panther going at it, which actually scars the shield for the rest of the movie, and then the Empire Strikes Back gag during the Spider-Man vs Giant Man moments. The action, the jokes (Spider-Man commenting on the physics defying shield of Cap), and even the emotional toll that this fight actually costs is really the penultimate moment in everything Marvel movies have been striving to achieve since Iron Man.

In comparison to other scenes on this list, maybe this one doesn’t hold up as much anymore. Maybe it is Captain America’s costume or maybe it is just that this scene doesn’t feel as fresh anymore. Regardless of all that, this was the first moment in movies like this this. Every other culmination and cohesion of characters into one scene in any comic book film is based on this scene, or if not based, because of this scene and how successful it was. First, the 360 degree camera spin on the team right before the battle really takes off is such an iconic moment in all of film, not just Marvel films or just comic book films, but all films. People will be paying homage to that the way filmmakers constantly pay homage to the slow motion alley walking scene in Reservoir Dogs. The actual battle itself is also amazing. What could’ve easily been a chaotic, vomit inducing destruction last act in the vein of Michael Bay or Roland Emmerich (or, dare I say, Zack Snyder) was a slick, clean action piece where the danger and collateral damage was still real, but there was still the fun levity because the movie understood the outlandish nature of itself. The Hulk knocking out gods, Hawkeye shooting arrows really well, Captain America saving the general populace, Black Widow kicking alien butt, or Iron Man just getting PTSD, this scene gives everyone their moments (even making Hawkeye seem cool).