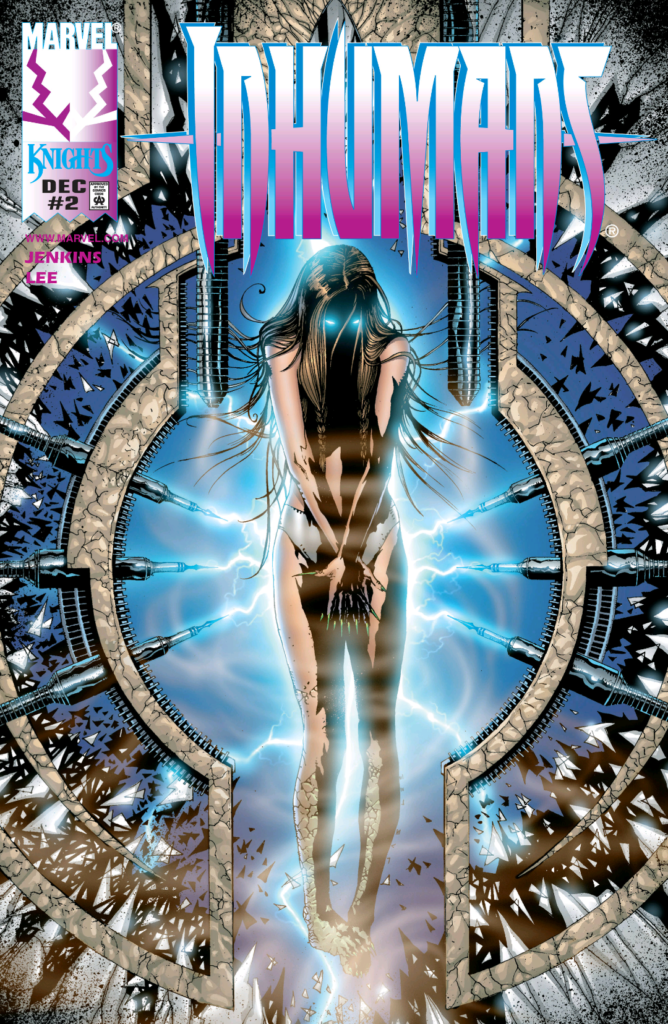 These issues are from the second standalone series for the Inhumans, and their first in over twenty years. This series was one of the first three Marvel Knights imprinted series, along with Christopher Priest’s Black Panther and Kevin Smith’s Daredevil. These series’ came on the heels of Marvel filing bankruptcy and Marvel seeking an exclusive contract with Joe Quesada of which they asked him to head up as the editor for this imprint (he also handled pencil duties for Daredevil, of course). It could be said that this imprint, including this series, is what showed Quesada’s capabilities and eventually lead to him taking over for Bob Harras less than two years after this line launched. Harras could see Quesada’s brilliance by ushering him to Marvel.

We start in the private bedroom of the young Inhuman, Tonaja, who is due to go through the Terrigen transformation tomorrow along with a handful of her friends and classmates. Through her diary writings we see both reluctance and excitement in what changes await her. Disliking her nose, she wonders if it will hopefully just be gone, and what skin color she will have when it is over with.

As part of the pre-night tradition, the group of youths must fulfill a final dare. Three of Tonaja’s classmates, Dinu, Nahrees, and Neifi, do something with Lockjaw. Tonaja is a bit upset because she has a crush on Dinu, but herself, her best friend Kalikya, and Dewoz do their own dare by breaking into the great maze which holds Maximus the Mad. The three sneak in through the air ducts above his holding cell and see him talking to himself as though Black Bolt is there with him. Slightly disturbed they turn to leave, but Dewoz hesitates for a second longer and Maximus calls out to him.

After this, Tonaja visits her grandmother to talk through her apprehension of the transformation she is about to go through the next morning. Her grandmother tells of her fear and reservation as an even younger child than Tonaja’s current age going into the mist filled chamber, and consoles her with loving words and an embrace.

The next morning at the Terrigen Chambers, Carthus, the overseer of the Terrigen process ushers the youths into the ritual, speaking on behalf of Black Bolt, because although he is present… look, if you need me to explain that to you then you have stumbled upon the wrong website.

With the royal consortium and the youths’ families looking on, the young adults enter into the Terrigen Chambers and are subjected to the mist. 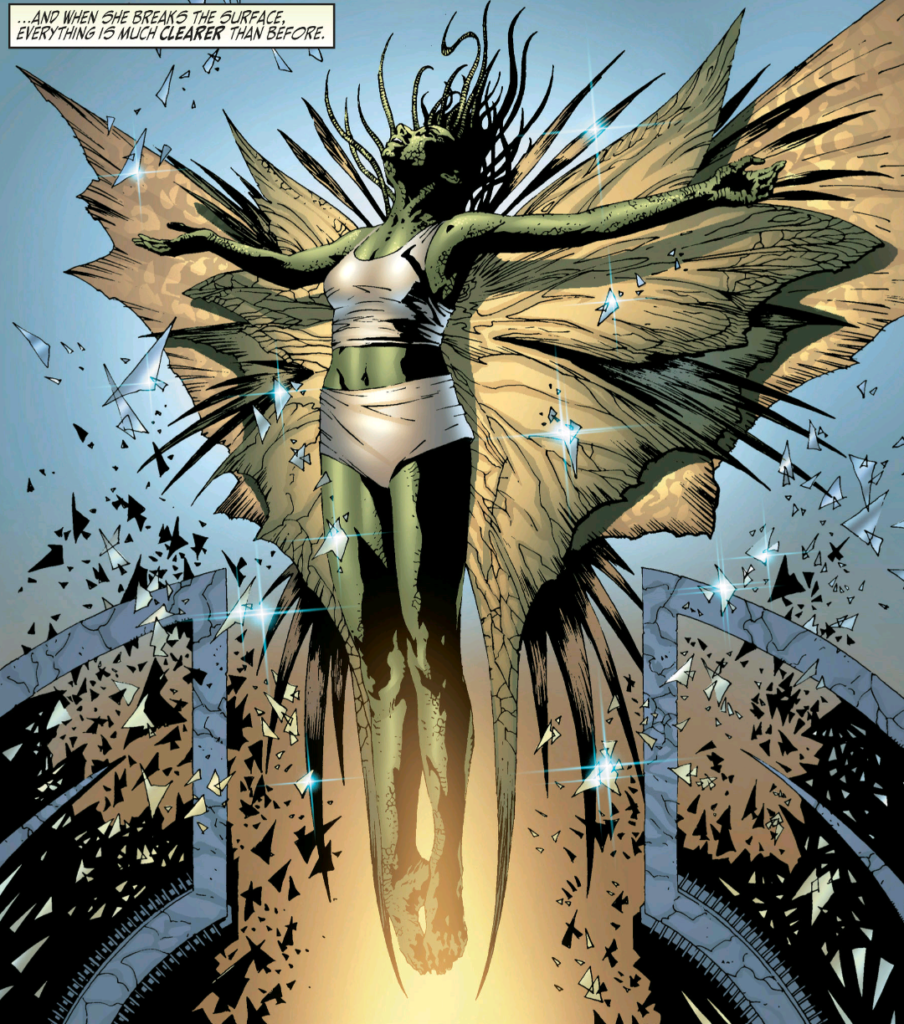 Tonaja’s pink, human skin starts to peel away revealing reptilian scales underneath and in a moment of clarity she discovers she has wings. Breaking free of the chamber she flies for the first time climbing to the top of the Attilan protective dome. Everyone looks on joyously as she is the first flyer to transform out of the mists in thirty years.

She comes back down to earth and is embraced by her family.

She first sees her friend Neifi’s transformation. He is a hulking reptilian Inhuman. Next she sees Dewoz’ family mourning and crying over his body. 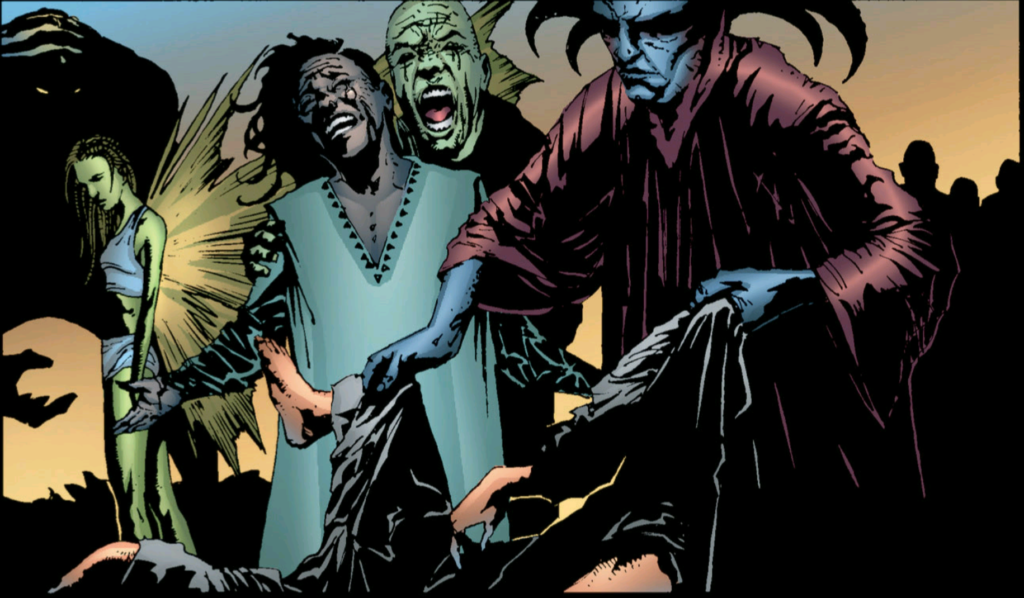 Later that day she brings Dewoz’ family flowers as they mourn the loss of their son. She sees her other friends there, Neifi, Nahrees (who is now an energy being), Dinu (who wears a protective mask over his face as his appearance now causes death to those who view him), and her friend Kalikya. Kilikya’s transformation has appeared to only leave her with slightly elongated and deformed hands. This has placed her in a different caste than the others who just transformed as they are all to become royal guards. Tonaja says hello and goodbye to Kalikya for the last time.

The evening after the youth are transformed, the city is subdued and somber after what happened to Dewoz. Normally this would be a time for celebration but we are led to believe Dewoz’ death in the Terrigen Mist is not entirely accurate. The city of Attilan is in mourning for something far worse: Dewoz has transformed into an Alpha Primitive. 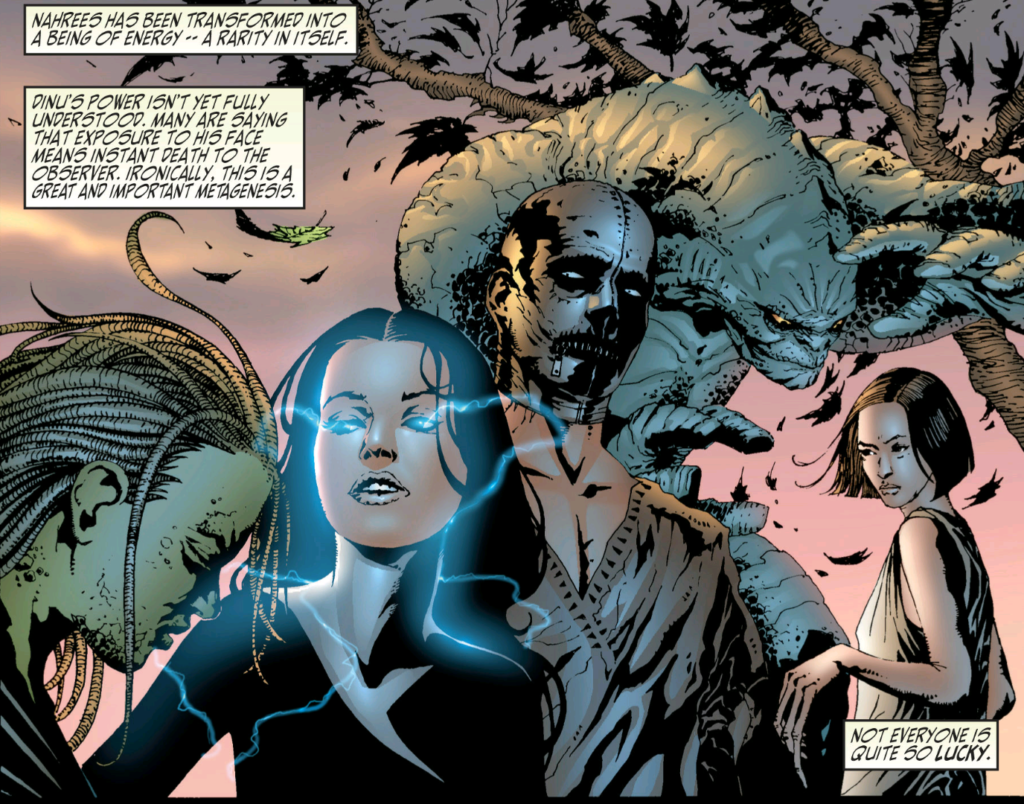 Carthus introduces the devolved Dewoz to the Alpha Primitives who live under Attilan and run the machines. They are angry due to reneging by Black Bolt on their original agreement of granting new spaces, but Carthus reminds them that “new spaces” would just mean expulsion from Attilan and that Black Bolt is their King. The Alpha Primitives angrily take Dewoz into their fold.

Back in the royal consortium, Medusa and Black Bolt seek guidance from Karnak on what the new Primitive means to their society. Karnak goes into the history of Ultarnt, an Inhuman geneticist, who discovered that Inhumans transform almost in a precognitive way where their genes unlock for what is needed. Karnak implies that the mutation of Dewoz goes against this pattern and is a flaw that could disrupt their entire society. 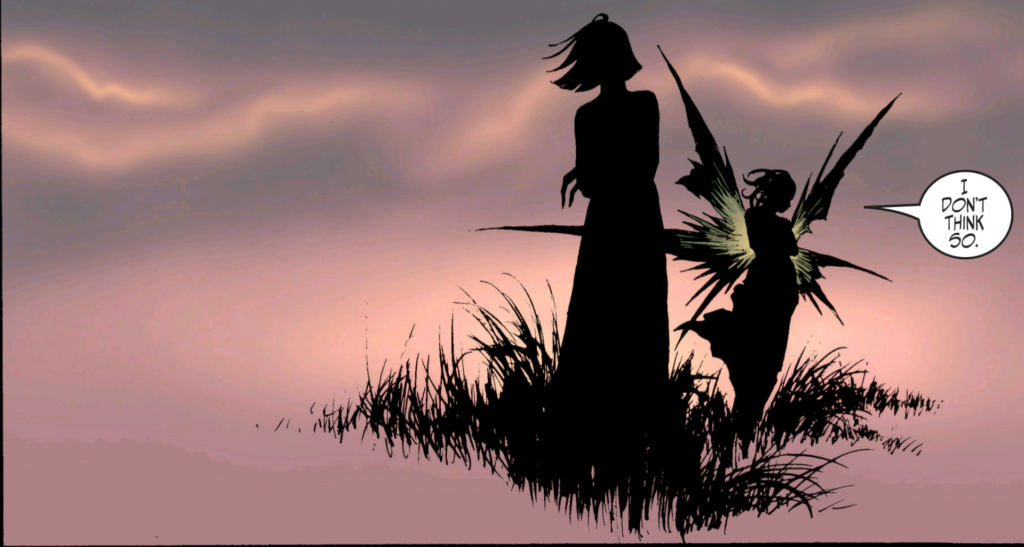 Gorgon is training Nahrees, Dinu, and Tonaja, giving them his best R. Lee Ermey impression. He leaves after a bit and the three newly transformed youths are left wondering about Dewoz.

Back under Attilan, Dewoz stares into a mirror fighting against what has become of himself. The other Alpha Primitives work the machinery as a strange voice guides him through the history of the subspecies. They were genetically created in a lab to be workers by an Inhuman scientist. Later, Maximus the Mad used their dim wits and strong backs to stir them into a revolt against their masters, the Inhumans. After Maximus was put down, the Inhumans granted them their freedom, but being that they were genetically created to work on the great machinery of Attilan, does that freedom mean anything? The voice continues to chide Dewoz until he taps into something deep into himself, a transportational component potentially, as he somehow links to Lockjaw and breaks a mirror he is looking into with an energetic burst.

Dinu tries to feed Lockjaw but his mind is somewhere else focusing most likely on his connection with Dewoz. Nahrees and Tonaja tease Dinu, but comment to each other how they still think he is cute even with a gimp-mask covering his death-inducing face. 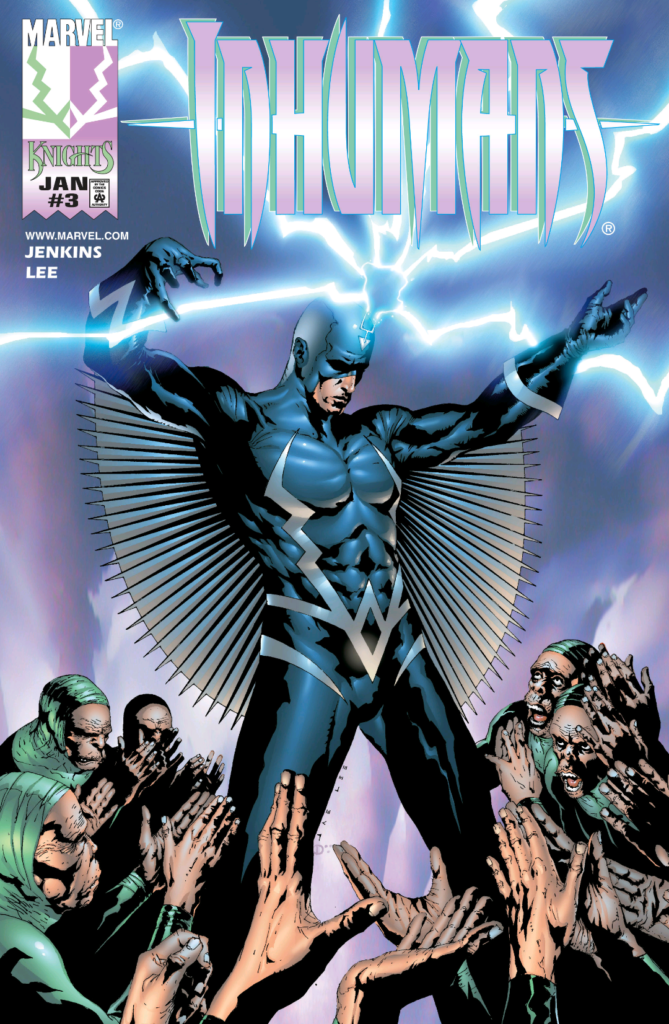 Back down below Attilan, the Alpha Primitives, still angry at Carthus’ words, debate over fighting the Inhumans. As they do this Dewoz, alone and still in front of the mirror, continues to discover that he may be more than a simple Alpha Primitive. He begins to interact with the mirror and is able to pass part of his arm through it as he creates a portal with the mirror.

In the throne room Black Bolt and Medusa get an update on Dewoz from Carthus. Carthus seems deceptive as he inflates Dewoz’ agreement to join the Alpha Primitives and how well he is taking to his new station. Medusa sees Dewoz as a potential ambassador between the Inhumans and the Alpha Primitives knowing full well how contentious their relationship is.  As Carthus leaves, Tonaja and Nahrees stop him and ask him to say hello from them to Dewoz.

As the voice continues to guide him, Dewoz continues to change and mutate more, and realizes that he can teleport using mirrors. To escape from the underground and his life as an Alpha Primitive he uses his abilities and teleports from the mirror in front of him to another one, somewhere else on Attilan, following the voice. As he emerges from the other mirror he is in the holding cell with Maximus the Mad who has been the voice the entire time.

Top to bottom these two issues are phenomenal. It had been a while since I had read this series, but I remember now why this is the series which made me a fan of the Inhumans. I liked them before, but this time the series clicked with me in terms of the nuances of the characters and society. There are political over-tones, especially in future issues, that are fascinatingly deep and thought provoking. 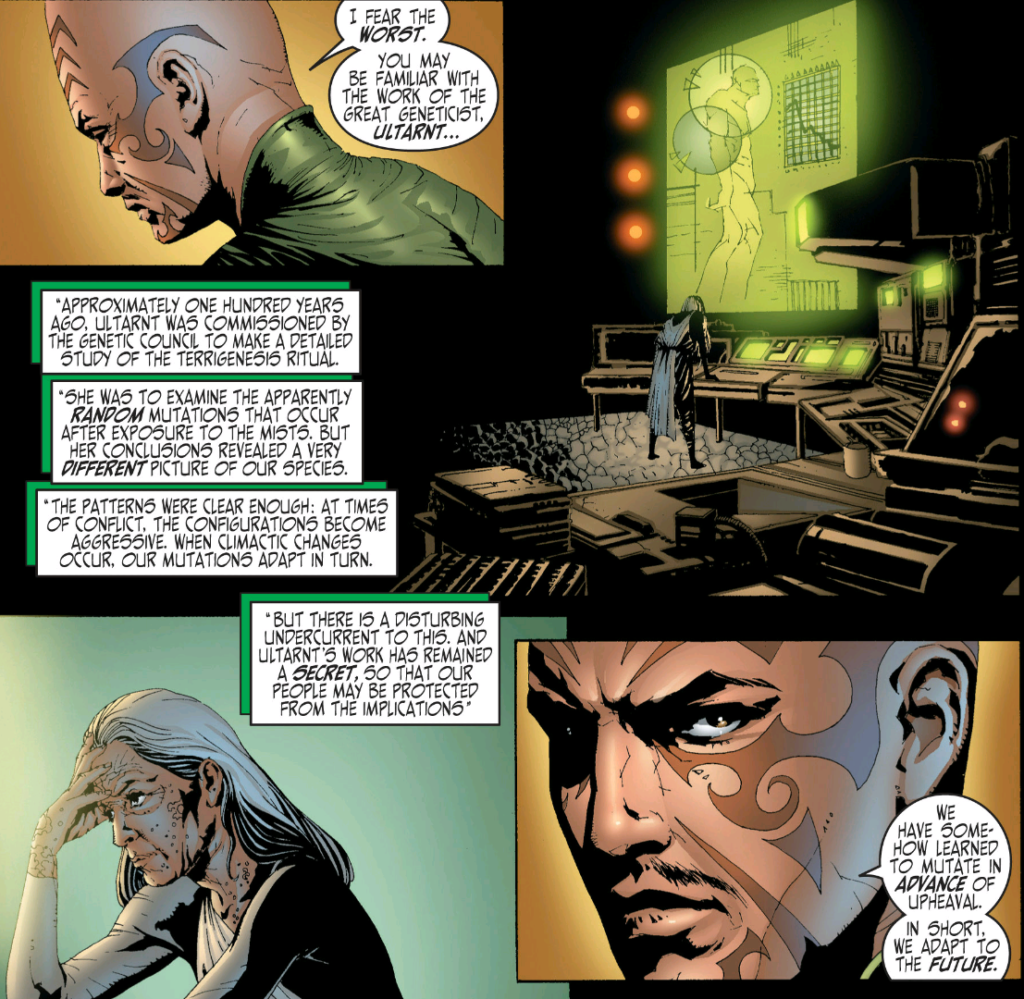 These ideas are mainly due to Paul Jenkins writing, which is expertly crafted. I was originally going to include issue one of this series for this review, but that issue doesn’t really have a plot, technically. It is mostly just expositional dialogue to remind you who each of these characters are and their current (1998 current) place in the world. While this issue is wonderful too, the story building really starts in issue two and it is a really fascinating look into the Inhuman culture while at the same time introducing a handful of new characters to focus on rather than the monarchy clique. Jenkins does an exquisite job of crafting issues that end leaving you begging for more, which is a trick many comic book writers past and present never entirely learned. That’s part of the serialized art form… it’s the woman tied to the train track and the hero rushing to save her then a “tune in next time” announcement. Hook me in to coming back next month and willingly and excitedly throwing down my pennies for the next issue! In this series, I believe Jenkins is perfectly on top of that, and now I can’t wait to reread this entire twelve issue series.

Jae Lee is a bit of a controversial artist from what I gathered. I love his work, but I know some out there find his use of shadows lacking dynamics and hiding details. Also his impossible geographical position of characters from panel to panel could possible cause Escher to have an aneurysm in trying to fit a map together in his mind. Even if you feel that way, this is an early and very tame Jae Lee. His work is gorgeous. The realism of his characters’ musculature and facial expressions is above most other artists in the industry. There are even panels in these two issues that look like they may be panels Greg Land has used to model many of his own work after.

The artwork is amazing and that is on top of a great script. Together they make one of the best Inhuman reads Marvel has ever delivered. I really can’t recommend this series enough. Whether you’re a new fan who has gotten in with the Charles Soules series, or you only ever read the McKeever series after this one, or you haven’t read an Inhumans story since Doug Moench wrote them in the 70’s – as long as you liked the Inhumans this is a great series for you to try out. If you are one of those who have never understood or given the Inhumans a chance, I really recommend you try this series out. It is only twelve issues and fairly easy to find. You may not become a lifelong fan after reading like me, but I think you’ll still greatly enjoy this almost twenty year old series which holds up amazingly well..