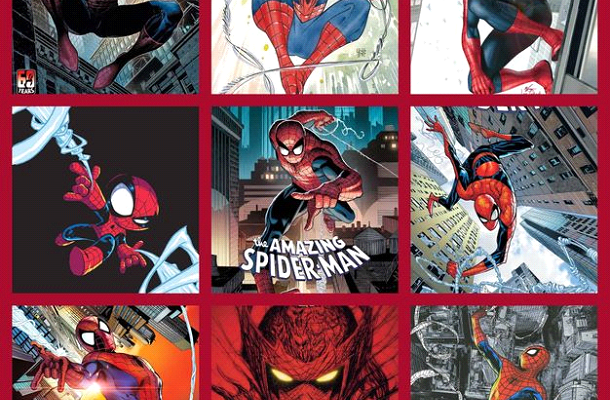 Marvel Comics will celebrate the 60th Anniversary of the first appearance of Spider-Man by releasing a plethora of comics featuring variant covers of the web-slinger for not only the line of Spider-Man comics, but also for some of Marvel’s most popular series including: Venom, Silver Surfer, Iron Man, and Captain Marvel.
The festivities kicks off on April 6th with the relaunch of Amazing Spider-Man will. ASM #1, alone will have over 15 different variant covers from such renowned artists as: John Romita Jr., Mark Bagley, Travis Charest, and many more.

Following the release of Amazing Spider-Man #1 at the beginning of April look for additional variant covers the rest of the month included in the ongoing series of Carnage, Shang-Chi, Thor, Venom, Silk, Silver Surfer Rebirth, Iron Man, Immortal X-Men, and Captain Marvel #39, which will be released in June.

Look below for the full release schedule for the variant Spider-Man covers and continue to follow The M6P for all your comic news.