Are you familiar with the name?

Perhaps you may better know Newell by his superhero identity – The Stingray.

Today marks the first article of one of the 616’s newest columns – “Obscure Characters from the Marvel Universe!”

For those who aren’t familiar with him, the Stingray’s first appearance was actually as plain-jane Walter Newell at first in the 1967 issue, Tales to Astonish #95. An oceanographer who worked for the U.S. government, Newell encounters Namor, the Sub-Mariner and his lover, the infamous Lady Dorma, while overseeing the construction of a domed city under the sea, the purpose of which was to generate food for the world. Unfortunately, the city is later decimated by the Plunderer.

Newell would later become a perennial character in Prince Namor, the Sub-Mariner. In the series, he’s ordered by the U.S. government to investigate why water is disappearing from oceans around the Earth. Originally thinking Namor to be behind the issue and in cahoots with aliens of all things, Newell creates a suit based on the form of a Manta Ray. He laters discovers Namor to not be behind the water disappearance. 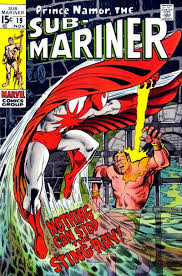 Newel is one sharp cookie. He has a Ph. D. in oceanography and is a skilled inventor of experimental oceanographic equipment.
For those of you battlesuit-fan junkies out there, the Stingray’s suit is actually pretty cool too. Unfortunately it’s designed mainly for underwater use. Make no mistake of it though Newell’s suit makes him the Iron-Man of the sea.

Also, the suit not only enhances his strength and durability to superhuman levels, but it’s also equipped with an oxygen-diffusing system which provides him nearly an indefinite amount of air to breathe while underwater. It also allows him to swim at enhanced speeds and the Manta-like wings even allow him to glide though the air for extended distances.

The suit’s main weapon is a powerful electrical discharge device which is built into its exoskeleton. It’s said to be able to project bolts of up to 20,000 volts through air or water and is released through gloves.

Following his stint with the Sub-Mariner, the Stingray had brief appearances in the Hulk and Defenders titles would later become a regular guest-star in Marvel’s Two-In-One title. Newell’s also aided the Thing and Scarlet Witch in the past as well.

More recently, in Marvel’s Civil War, the Stingray was a member of the Secret Avengers led by Captain America. He was later granted amnesty by Tony Stark at the conclusion of the saga.