It’s been a long time since I’ve put together a brand new “Obscure Characters from the Marvel Universe” but I couldn’t be more thrilled to be back at it. Even more, for the return we’ve found a DOOZIE of an obscure character.

Who is Brother Voodoo?

So who is Brother Voodoo (Jericho Drumm) you ask?

Starting out, he starred in his own feature in the Marvel comic-book series Strange Tales in the early seventies and since then has been featured sporadically throughout the years in various Marvel series.

At one point Brother Voodoo’s name was changed to “Doctor Voodoo” during the time in which he replaced Doctor Strange as Sorcerer Supreme (Dark Reign storyline).

Brother Voodoo’s story starts upon his return to his home country of Haiti. This is after 12 years of education and practice as a psychologist in the U.S. He decides to return to his homeland after learning his twin brother, the local hougnan, is dying due to a voodoo sorcerer who claims to be possessed by the spirit of a serpent-god “Damballah.” Upon dying, Drumm’s twin brother ask he be trained by the same mentor he had – Papa Jambo. Jericho does and eventually develops a greater mastery of voodoo practices than his own brother had. Papa Jambo later performs a rite which summons Drumm’s twin brother’s spirit from the dead and joins it with Jericho’s.

Brother Voodoo possesses numerous mystical and quasi-physical powers derived from the Loa, the spirit-gods of voodoo. Among these powers are the ability to enter into a trance-like state in which he does not feel the heat from fire and his skin becomes impervious to burning. He can also control flame and lower life forms.

Voodoo can also mystically create smoke accompanied by the sound of drums. The smoke conceals his presence while he is able to see through it. He has the ability to command certain living things by a mystic sort of hypnotism, most effective over animals and plants. He can summon the Loa to request transport for himself and others instantaneously if they deem it necessary to his mission. 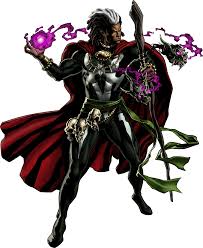 Brother Voodoo was referenced in the Beavis and Butt-Head comic book (also published by Marvel Comics) in issue #15, summer 1995. The comic depicts Brother Voodoo arriving to the sound of beating drums, calling out, “Dumballah, I am coming for you!”, prompting Butt-Head to ask, “Who the HELL is this WUSS?”. Beavis identifies him incorrectly as “Brother DooDoo” despite Dumballah actually referring to the Brother by his proper name on the same page. Brother Voodoo wrestles with a snake, dispatches it, and finally threatens Dumballah with the promise, “…You’re next!”

Check Out Some of Our Previous Editions of this Column – Obscure Characters from the Marvel Universe #11.