Behold the vicious, the cunning the paraplegic…BUSHMASTER!!!

In today’s edition of Obscure Characters from the Marvel Universe, we take a look at one of the brand’s most unique villains ever created.
Who is the Bushmaster?

For those who aren’t familiar, BushMaster made his first appearance in 1985 in Captain America #310 and was created by Mark Gruenwalk and Paul Neary. His real name is Quincy McIver. During his teen years, he was introduced to a life a crime by his older brother. During one of his first criminal gigs, McIver is ambushed by the police and out of fear of getting in trouble from his older brother, dives into a river and try to swim as far as he can so he could drown. Instead, he gets hit by the propeller on a police boat and loses his arms and legs.

McIver is later contacted by the infamous Sidewinder who indicates he can restore McIver’s mobility. Following numerous experiments, Quincy awakes to find himself with a whole new body – exactly like a snake’s! He would later take the name of his brother who gets killed by Luke Cage. He would later join Sidewinder’s Serpent Society.

Despite his obscurity, Bushmaster has appeared in some of Marvel’s greatest story arcs including Atlantis Attacks, Avengers vs. X-Men, Civil War and more.

Obviously Bushmaster’s abilities aren’t natural. They include bionic enhancements to his arms and a snake tail which grants him mobility, speed and strength. He also has two single claws which protrude from above his forearms. And yes, the claws serve as his “pseudo-fangs” and even inject venom. Bushmaster also has the ability to ensnare opponents by wrapping them up with his tail. 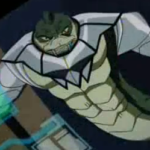 Bushmaster appears in the hit cartoon “Avengers: Earth’s Mightiest Heroes” as one of the Serpent Society members in the “Ultron-5” episode. With that said, the show’s creators obviously took some liberties as Bushmaster looks more like a snake than man in this version.

Check Out the Previous Edition of this Column – Obscure Characters from the Marvel Universe #1.