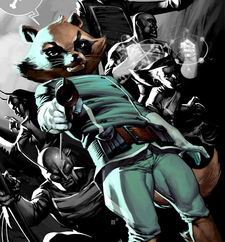 The First “Marvel Versus” By Darrin Michael!!!

These days, it seems like there is always some sort of debate between comic enthusiasts everywhere regarding what would happen if certain characters from the Marvel Universe ever squared off.

And that’s what this new column from the minds at Marvel 616 Politics intends to answer each with a set of new characters. The choices each week will be unique and out of the ordinary so we you hope all enjoy them.

With that said, it’s time for the first ever “Marvel Versus” battle for the 616.

For today’s match, we’ll take a look at two very unique characters from the Marvel Universe – Doop vs. Rocket Raccoon.

The question is who would win a fight between the two. Before we start looking at what would happen in a fight let’s break down today’s contenders.

Aside from being a genetically modified raccoon, Rocket really doesn’t have any superpowers. He is however a master tactician and field commander, expert marksman, and even an accomplished starship pilot.

Said to be the product of a Cold War experiment gone wrong, Doop in contrast to his opponent has a wide variety of super powers at his disposal including the levitation, an accelerated healing factor, superhuman strength, and even an extra-dimensional void within his body which allows him to store objects and people.

Let’s face it. At first glance, it would appear Doop has far more fire power than Rocket. With that said, Rocket is a Guardian of the Galaxy for a reason. Just because he doesn’t have as many powers as Doop doesn’t make him any less of a formidable foe.

I could picture this battle beginning like so, Doop strolling along a nice little street with a smile and being ever so jolly when out of nowhere, a huge blast from one of Rocket’s guns explodes on him. From there, Rocket continues to fire mercilessly upon Doop, never letting up. That is until Doop is able to get out of this precarious situation, flank Rocket and give a quick charge, hurdling him blocks down the street.

Pleased with his victory, Doop decides to continue on his journey. It’s only then that a menacing shadow begins to hover over atop of him and we see Rocket has brought one of his starships with him as well. The raccoon once again begins unloading on Doop, even more intensely than before. He then is able to use a cable to haul Doop all the way into outerspace, where Doop floats away into the great abyss.

That’s right. Despite all of his powers, if it came down to a battle I believe Rocket Raccoon would be able to outwit Doop and defeat him. With that said, if Doop is even able to get one hand on Rocket…it’s over. The key to Rocket being successful hear is being able to allude Doop’s grasp.