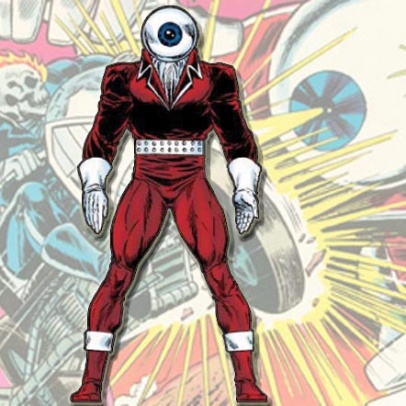 Brought to You By Darrin Michael!!!

We’ve got a special edition of “Obscure Characters from the Marvel Universe” and we couldn’t more excited as it ties in directly with the current Original Sin crossover series.

Yep…and with that you may already know who I’m talking about.

Who is the Orb?

The Orb, who’s real identity is Drake Shannon, is for the most part, has been predominantly tied to the Ghost Rider series in the past. His first appearance came in the November 1975 issue of Marvel Team-Ups #15. He was created by Len Wein, Ross Andru, and Don Perlin.

Shannon owned half of the traveling motorcycle stunt show which would later feature Johnny Blaze (Ghost Rider). The latter half of the show was owned by Blaze’s mentor Crash Simpson. Born in Wheeling, West Virginia, he is an accomplished motorcycle rider. While the partnership between he and Simpson was fine at first, eventually a large rivalry was created, and neither wanted to continue working with the other but neither wanted to “pony up” their half of the show and sell it. So, they decided to race for it. As you can imagine, the outcome didn’t bode well for Shannon.

After a race that went neck-to-neck most of its duration, Shannon tried to swerve and cause Simpson to crash. Instead, it caused Shannon to loose control of his motorcycle. Although he managed to stay upright on his bike, he had slid 25 years on his unprotected face which would leave him horribly disfigured.

Aside from the current Original Sin series, the Orb has been featured in Ghost Rider. He’s also appeared in Astonishing X-Men & Wolverine mini-series.

Even more interesting is the fact a second Orb would later show up in the Marvel Universe. He robs a bank with and take some hostage’s eyes, clearly insane. Due to this obsession with eyes, it seems only natural to assume it is this version of the Orb which appeared in Original Sin #2.

To cover his disfigured face, the Orb wears a Helmet which is capable of powerful laser blasts. It can also project illusions and hypnotize people.

Unlike the original Orb, the second Orb’s head is an actual giant eyeball.

Check Out the Previous Edition of this Column – Obscure Characters from the Marvel Universe #2.