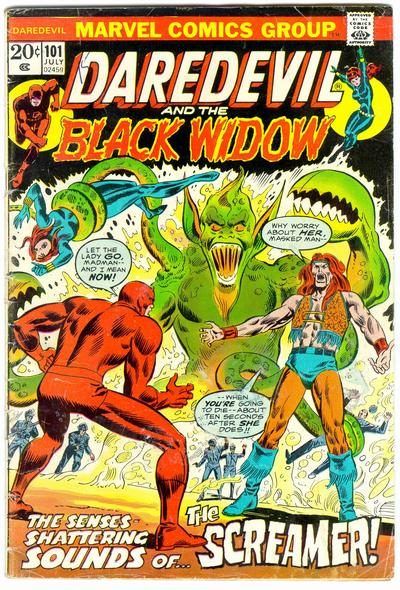 That’s right. That’s the best way I can describe this week’s edition of Obscure Characters from the Marvel Universe. Why’s that you ask? 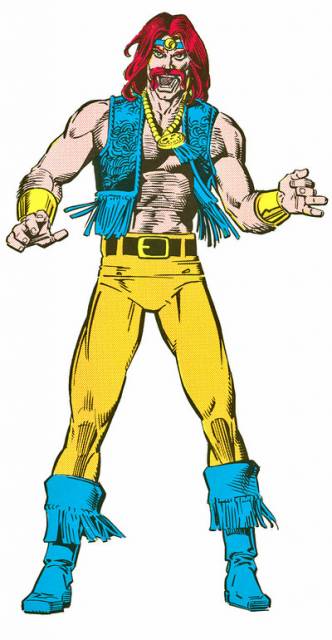 Otherwise known as David Alan Angar, Angar the Screamer first appeared in in the 1973 issue, Daredevil #100. Born in San Francisco, California, Angar became a hippie and radical social activist, eventually volunteering for an experiment which would give him superhuman powers. Moondragon had provided a crooked attorney with a device which had been constructed on Titan. The device bombards Angar’s vocal cords and as a result, it gives him the ability to scream so loudly it causes people to hallucinate.

Angar enjoys attacking his victims for no reason. He’s gone after a number of superheroes in his day including trying to kill Daredevil and Black Widow in the early days.

During a robbery, Angar is shot and dies in his girlfriends, Screaming Mimi’s, arms. (Mimi has similar powers and would later join the Thunderbolts as Songbird but that’s another article ; ) Angar is later found by Baron Helmut Zemo who performs experiments on Angar’s body, experimenting on his larynx. The experiment’s eventually resurrect Angar but as an abstract being made of sound now call Scream. The resurrected Angar would only obey orders and showed no raw emotion. 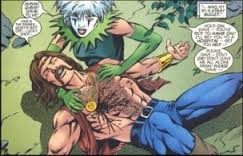 Angar would later reunite with Songbird and his true identity revealed when Scream restores himself to take Angar’s appearance again.

Angar was killed in Thunderbolts Annual ’97.

Angar the Screamer his abilities include everything causing memory loss in people to a superhuman scream and the ability to induce vocal hallucinations. As Scream, he is a being of pure sound which has an immunity to physical harm, can fly and who can also manipulate sound.

The only other media Angar can be found in is a brief mention in Facebook’s Marvel: Avenger’s Alliance.

Check Out the Previous Edition of this Column – Obscure Characters from the Marvel Universe #3.