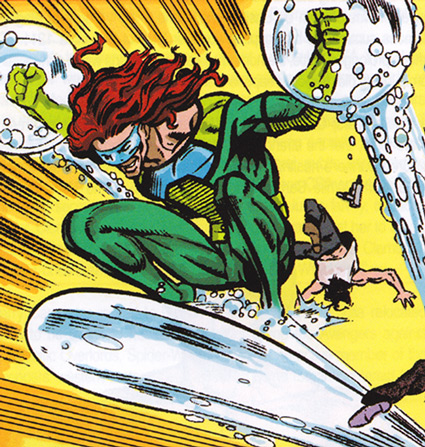 Today we take a look at the eco-terrorist Aqueduct!

So who is the mysterious, aquatic villain you ask?

Peter Van Zante, formerly known as Water Wizard, Aqueduct, a veteran in the Vietnam War, had an experimental device used on him to help keep him alive after being wounded while on a ship. A lightning bolt would strike the device but at the same time, rejuvenated Peter. He would later find he could manipulate water into any three-dimensional shape he wanted. Early on in his career, he would use his powers as a petty thief robbing banks. The Enforcer would later send Aqueduct after Ghost Rider. Aqueduct would obviously fail in this endeavor.

Van Zante was later hired by Justin Hammer to go after Iron man along with a number of other villains. However, the Water Wizard would run away scared.

The Water Wizard would later become the eco-terrorist Aqueduct, joining the Forces of Nature.

Aqueduct can manipulate water into any 3D form he wants. He has blast power, psionic abilities and willpower-based constructs.

Aqueduct was part of the Omega Squad during the Civil War storyline which also included Killer Shrike, Ox and Slyde.

Check Out the Previous Edition of this Column – Obscure Characters from the Marvel Universe #9.