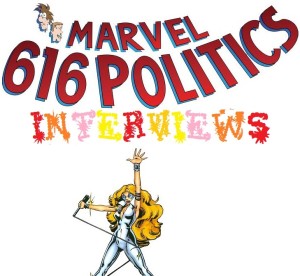 Today we’re going to be talking to Scarlet Witch. “Which witch,” you may be asking yourself if you’re into puns. Scarlet Witch is best known for culling almost her entire species with one sentence fragment, but not before she had imaginary babies with a robot. I have no idea what is going to happen today.

Marvel 616 Politics: Welcome, Wanda, and thanks for agreeing to do our show! I know that many people don’t see you in the most positive light, and you risked a lot of backlash when going out in public. But we really appreciate you meeting with us.

M6P: What!?!?! Where’d that tree with a pooping monkey in it come from?

SW: It was always there?

M6P: Did you use your strange powers to make a pooping monkey appear here?

M6P: We should change your name to The Scat Witch.

Moonboy: Have you seen a large red dinosaur? He was right here a moment ago.

M6P: Sorry, I think Barbara Eden over here may have displaced you in time and space. Could you stop pooping on everything?

M6P: HOLY CRAP! Why’d you make a giant red dinosaur appear?!?!?! Why not just make the pooping monkey go away?!?!?

Moonboy: There he is!

M6P: Uh…. Mister Dinosaur, how are you able to drink that champagne with your tiny arms?

M6P: If you take them with you, please, yes.

Producer Andy: What just happened? I’m not even sure that’s how her powers work.

M6P: I don’t know, but it looks like you’ve got something to clean up now.

X-Treme: Hey! I heard my name! You guys wanna go watch re-runs of Saved By The Bell: The College Years and drink Crystal Pepsi?