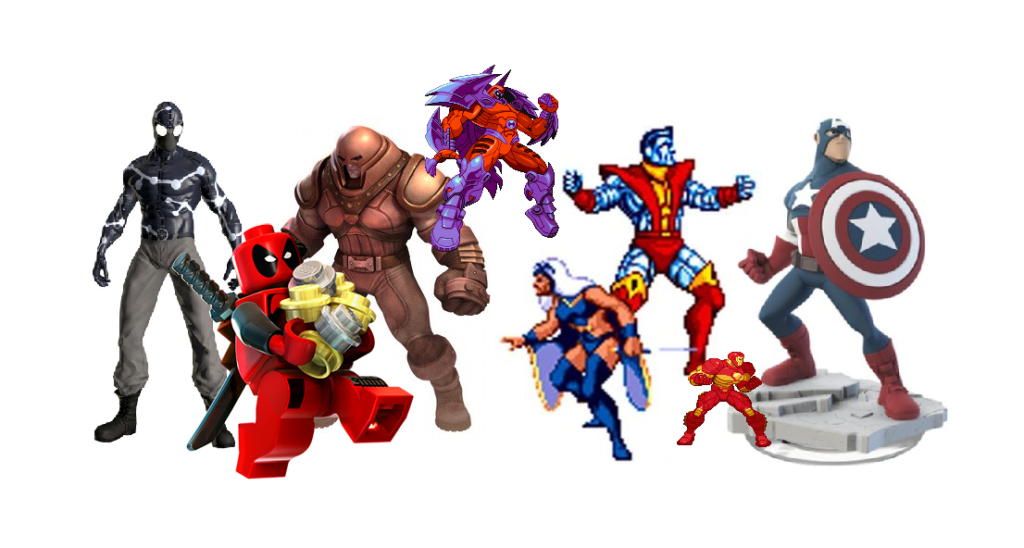 When devising a list of the Top 10 Marvel Video games, only actual ‘video games’ were taken into account; not mobile or Facebook gaming platforms.  I’ve put plenty of time into Marvel: Future Fight, but it isn’t an actual video game like Skyrim or Fallout 4. Based on that criteria, I know some many not agree but it is so fun and easy to offend and get people riled up. This list is comprised of games that came out prior to 2016/

Each of these games were great and the best possible options for playing video games with the characters we loved at the time they came out. Sadly, as amazing as they were, let’s not be hipsters and pretend that these are just as fun as modern games to go back and play. They are fun to go back and play, reminiscence nostalgically, and wax poetic about, but they don’t hold a candle in terms of modern gameplay next to most on this list. In fifteen to twenty years the same will probably be said for those that are on the following list. 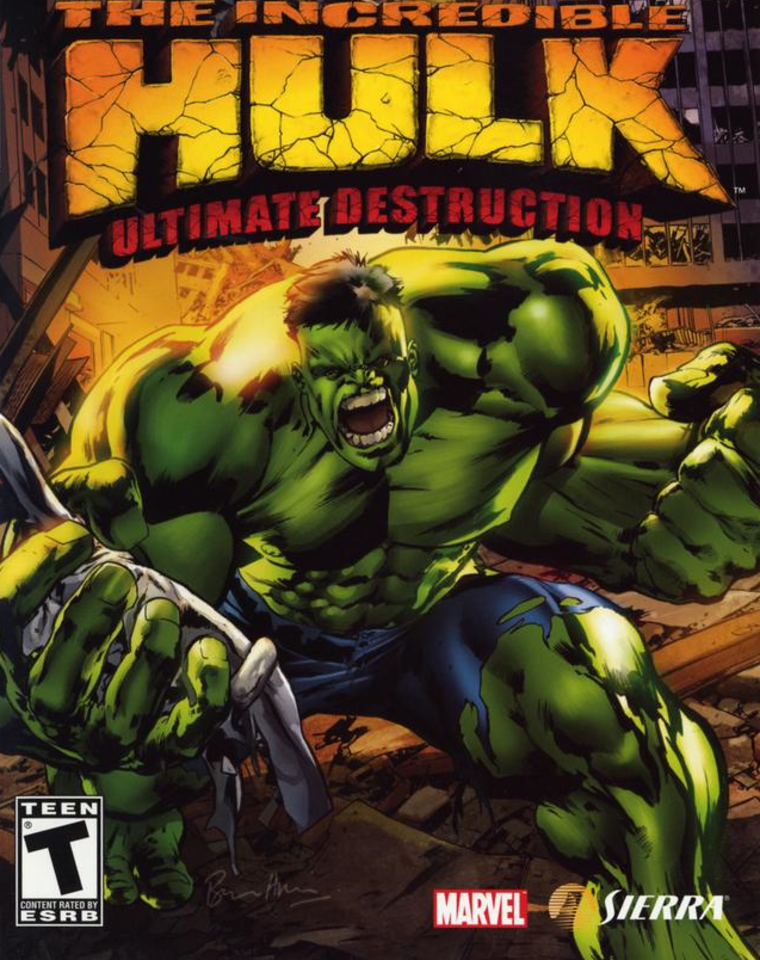 Have you thought about how cool it would be to run around just destroying everything in sight like the Hulk? Whoever designed this game must have thought about that because this game gave us a semi-open world fighting style where everything was destructible. It was like the Rampage games of old, but with a storyline. One of the largest saving graces on top of that was instead of trying to recount the now maligned movie which came out around this time, this game actually tried to get things right with the comic book mythology of the character. It was incredibly challenging at points, but in a completely fun way. While the game after this which tied into the Edward Norton movie did have better graphics and allowed for a few more game mechanics, that game was also almost too big and too slow, which makes this definitively the greatest Hulk game ever made.

It is such a rare occasion where a movie-based video game is actually better than the movie itself. Typically the games are horrible or at best mediocre no matter the caliber of the film, but the worse a film is the worse a game usually is (see FF: Rise of the Fantastic Four as a perfect example). However, this game was great. The first hurdle it knew it had to clear was the rating. This game went ahead and gave us a mature rated game with all the Wolverine gore they knew we wanted. The beautiful part of that is they didn’t go to an extreme level like the Punisher game released around this same time which featured torture mechanics and brutal instance kills. It held back just enough so parents might actually be okay with their kids playing it. While some of the game play was a bit repetitive, there was a pure joy to having a virtually unkillable character and running head long into a group of enemies and activating a whirlwind claw attack. 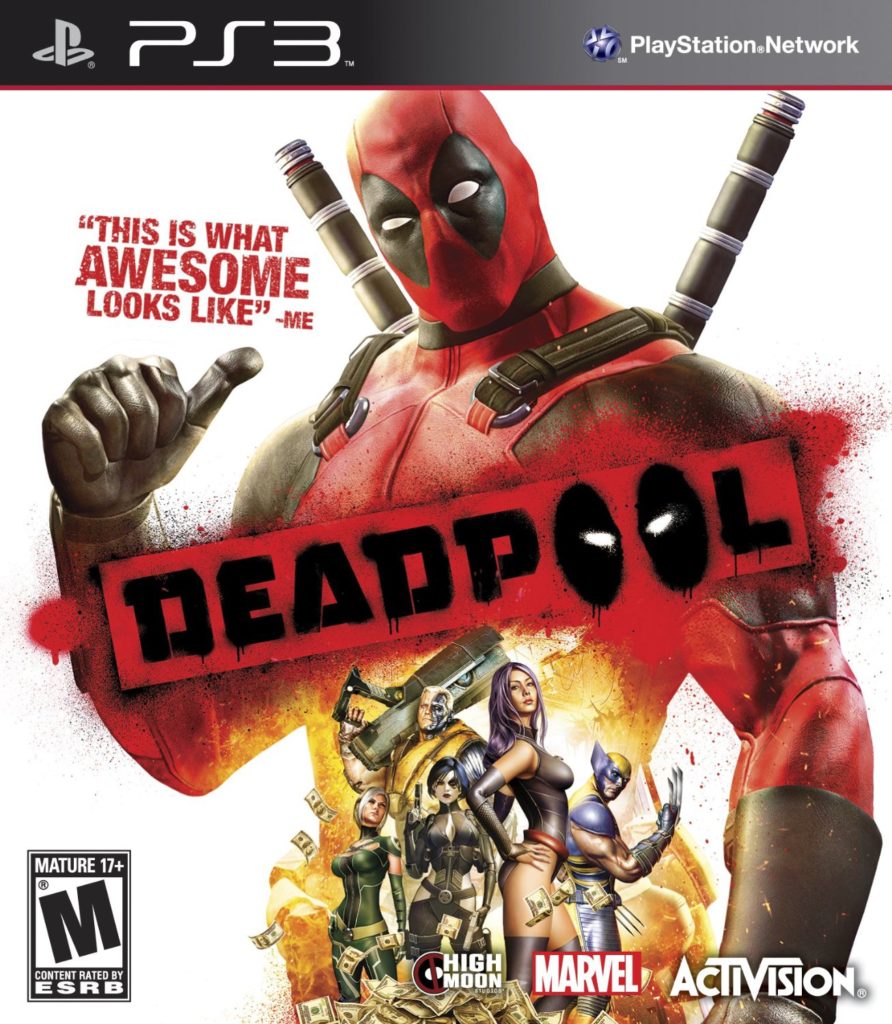 Like many of these games on this list, this game was repetitive in gameplay terms, but it perfectly captured the Deadpool tone, especially if you were a fan of the Daniel Way run. This game was almost comedic in its levels of gore and contained plenty of cursing and inappropriate innuendos and humor. If you ever wanted to be Deadpool this game was your chance, unless you were my cousin’s kids (yeah, I ruined these kids’ Christmas because I warned their dad not to let them play this game, but they were six and eight. I did talk him into buying them number five on this list though, so they got an even better game. But seriously people, you have to learn to read the ratings clearly marked on the packages especially if you’re a parent! Are we still in a parenthetical phrase? I use these too much, don’t I?)

Get you quarters ready kids, because nothing beats the actual cabinet version of this game. This was basically the great TMNT arcade game, but with the X-Men instead. If you had three friends and you were bigger than the rest of the kids standing around your local movie theater arcade room, you could have fun for hours with this game. You could be Cyclops, Colossus, Wolverine, Storm, Nightcrawler, or Dazzler (still the only video game to feature her as a playable character, I think). For the early 90’s these graphics were unbeatable too. You can still get this game without spending a fortune on the box if you have a 360 or PS3, but I’ll warn you it isn’t the same; still fun, but not the same. 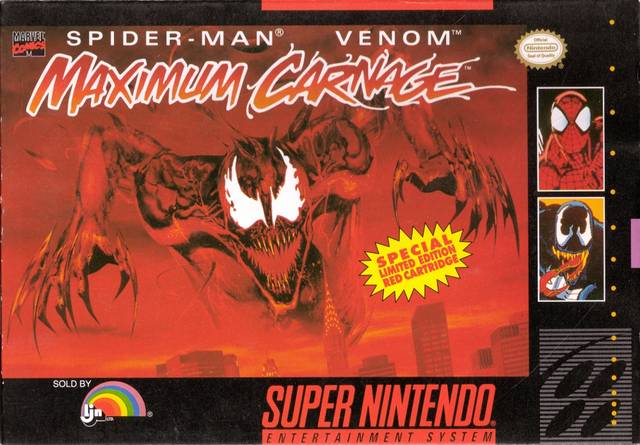 One video game took a twelve part comic book event and somehow in 1994 perfectly translated it to video games. For years later, developers would  constantly try to reachieve the success this game saw with the Death of Superman, The Incredibly Hulk: The Pantheon Saga, and Venom/Spider-Man: Separation Anxiety. They were all substandard compared to this game. For its time, and really even for modern standards when you look at games like Spider-Man: Web of Shadows, Maximum Carnage had such great references and cameos that no one had seen the likes of before in video games. The variety of game play and the switching between characters made what could’ve been a repetitious game exciting and still hold up remarkably well even today. 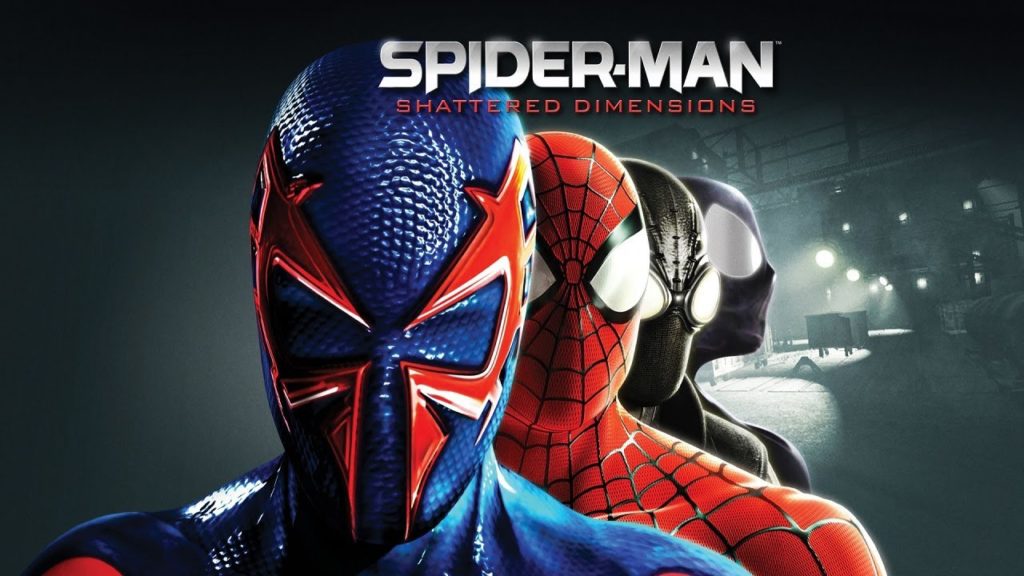 This is probably one of the greatest Spider-Man games ever made aside from one which you’ll see in a bit. Four different Spider-Men, four different gameplay styles, four different visual styles; all in one complete and amazing game. Amazing, 2099, Ultimate, and Noir versions of Spider-Man all showed up, each with classic villains properly tuned to their particular universe. This game was a Spider-Fan’s dream come true. If you ever wondered why this game feels like it was ripped off by Dan Slott in the Spider-Verse storyline, it is because this was written by Dan Slott and he ripped himself off. Sadly the sequel to this game, while not horrible, narrowed the gameplay down to only two Spider-Men and created a much less exciting experience.

Maybe you’re asking, “But what about X-Men: Children of the Atom or X-Men vs Street Fighter or Marvel Super Heroes vs Street Fighter or Ultimate Marvel vs Capcom 3?” Yes, each one of those games in and of themselves are amazing and fun if you’re into one on one fighting style games. All eight versions of this game series are fun. However, MvC2 has the distinction of having characters appear that have not appeared in any other incarnation of some which have never been playable again. Cable, Colossus, Iceman, Psylocke, Silver Samurai, Spiral, and (more importantly) Thanos were all playable fighters in this version. This is the only game that had Thanos as a playable character until Lego Marvel Super Heroes (which still makes it in some ways the only game where you get to actually play as Thanos.) This was also the first version that featured Doctor Doom. Who didn’t want to see a fight between Mega Man and Doctor Doom? 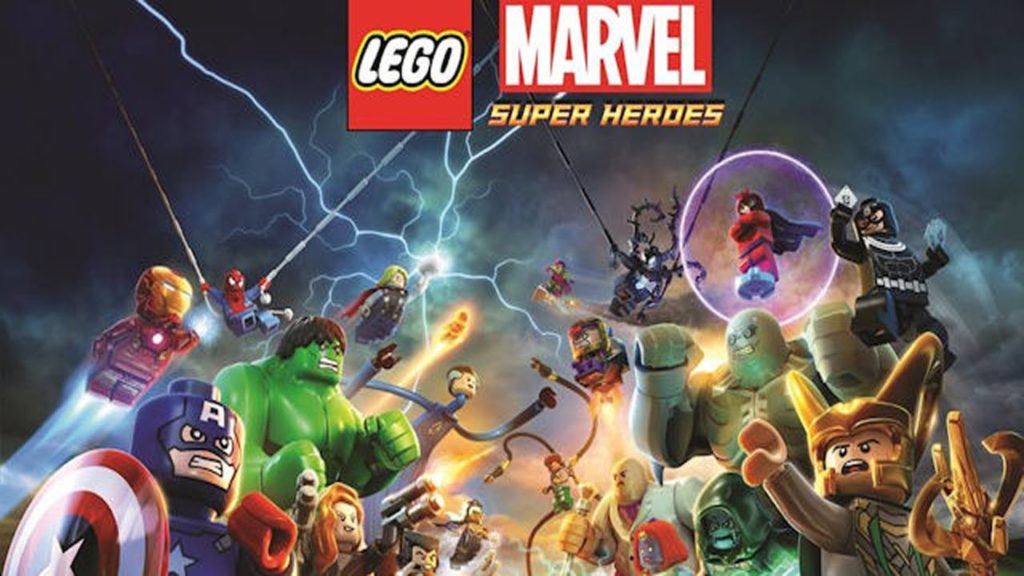 The Lego brand knows how to create a fun game, and adding a ridiculous amount of playable characters (156 without DLCs according to Google) only means that there is a good chance your favorite character is available in this game. For those OCD gamers like me who try to complete 100% of the games they start this game has many, many hours of gameplay and replayability. Also playing off a great gag from The Simpsons’ I Am Furious (Yellow) episode (Season 13, Episode 18), Stan Lee is unlockable to play in this game and he can turn into the Incredible Hulk. Tons of humor and truly fun for every age, makes this easily one of the greatest Marvel games ever made. If it just wasn’t for the cartoony Lego appearance, this one would’ve probably easily beaten the number one spot on this list.

Spider-Man… Spider-Man… Does whatever a spider can – in this game, so could you. While this wasn’t the first open world sand-box game for Spider-Man (preceded by the initial movie’s tie-in game) this game took what was a great idea and perfected it, creating a much larger city, more moves, a better fighting platform, and tons of unlockables and cameos. While each iteration of this game (there has been a similar game for each movie release, so that makes five versions) this really was the first one to get it right, and each following game felt like a repeat on many levels. The latest movie tie-in for The Amazing Spider-Man 2 did vary a lot of the gameplay up (trying to obviously offer something for the Shattered Dimensions/Edge of Time fanbase), but the entire series after this game was really just trying to be a cash-cow for either hardcore Spider-Man fans like me or little kids who were too young to play the previous incarnation. 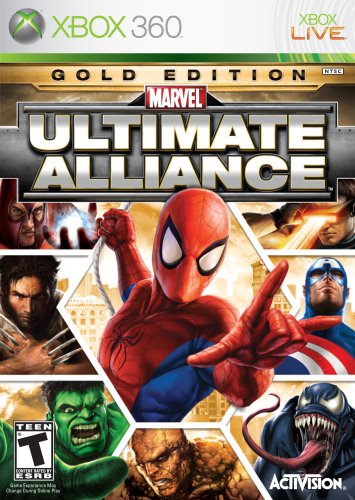 This game wouldn’t have made it to number one without two other great games, which some could argue are better than this game (I would not argue that, but some people do): X-Men Legends & X-Men Legends 2: Rise of Apocalypse. All three of these games offered great graphics, great game play, and a huge toy box of characters to play as. Ultimate Alliance: Gold Edition wins hands down because of the massive toy box it offers you, more than doubling the playable characters from the two X-Men versions and offering a cavalcade of NPCs that would make any self-respecting comic geek’s dream come true. You would be in a small minority if your favorite Marvel character did not show up in some form or fashion during this game. Not to sound like a girl playing with her Barbies, but the multiple costumes for each character offered addition deep cuts. You could play as Binary or Beta Ray Bill or US Agent or Ben Riley or any number of 616 or 1610 characters in this game. Banding together specific teams of four heroes or villains granted you team bonuses, and, yes, with the gold edition adding Hulk and the game already offering Wolverine, Spider-Man, and Ghost Rider in your line up gave you a New Fantastic Four bonus. How’s that for a great reference? Sadly the sequel to this game, although it had an amazing premise following the Civil War plot line, was nowhere near as in depth or produced with the obvious passion for Marvel Comics as Marvel: Ultimate Alliance: Gold Edition.