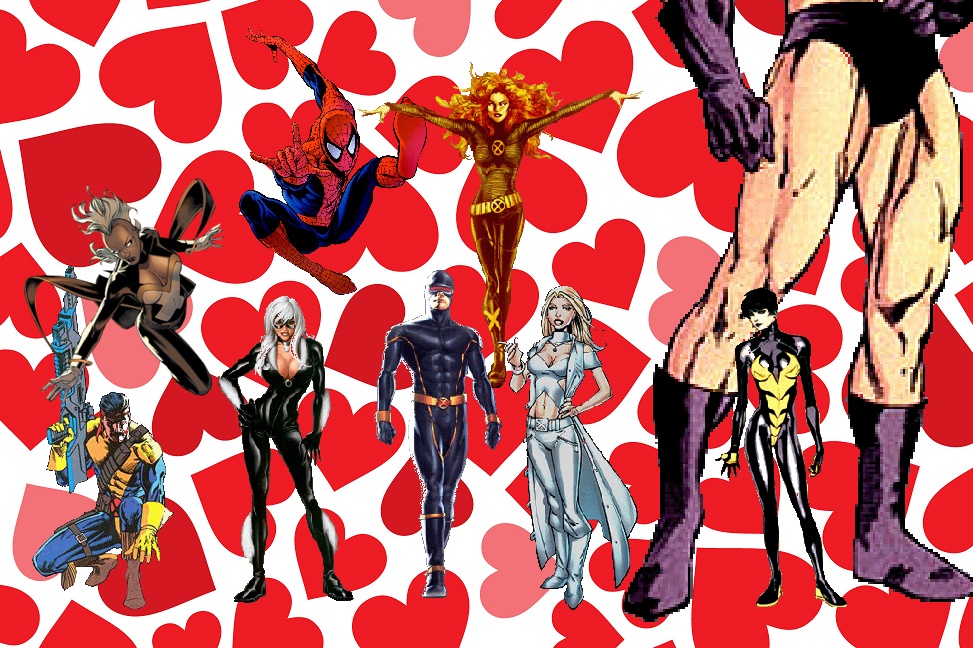 Love. Love is love. You can’t stop love or even hope to contain it. Love can be powerful. Maybe all Galactus needs is a good hug. Valentines Day is right around the corner and this is a great time to look at some of Marvel’s happy couples. This is a list of super couples, which means both members have to be super so you won’t see Spidey and MJ or Tony and Pepper on this list.

Daredevil and Elektra, Hulking and Wiccan, Cloak and Dagger, Colossus and Kitty Pryde

This is Top 10 Tuesday so the list had to be narrowed down. Here are your top ten super couples: 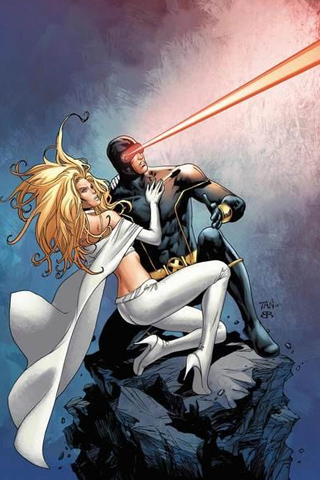 Love can make a man better, or it can make him do terrible things. It’s debatable whether it was Emma’s influence on Scott that turned him from a boy scout into the angry hard edged leader that he is now, but the timing does match up. This unlikely couple proves two things; opposites attract, and love changes people. 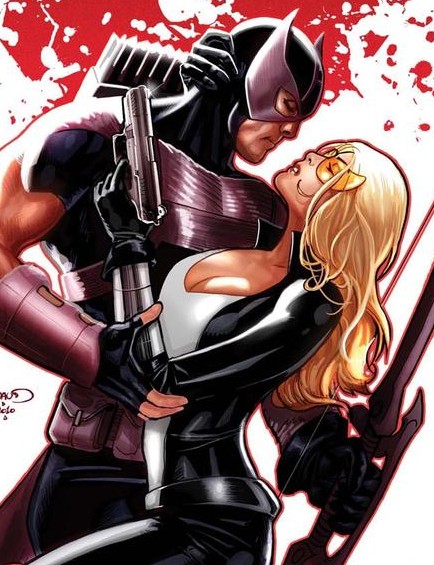 Talk about a whirlwind romance! These two love birds met, started dating, and we’re married over the course of Hawkeye’s first four issue limited series. They spent most of their West Coast Avengers time as a married couple. There have been a lot of ups and downs in their relationship, sometimes one of them dies, sometimes one of them cheats, but I think these two are destined to be together again. 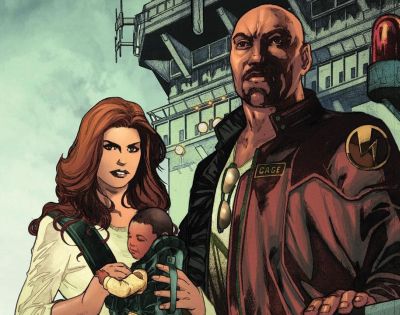 Luke and Jessica don’t have your typical comic book romance. It started out much more “R” rated than most of our other couples. Since their tumultuous beginnings, they have become a true family. Jess and Luke focus as much time on each other and their daughter, as they do fighting crime. They are a testament to the work and perseverance it takes to make a marriage work. 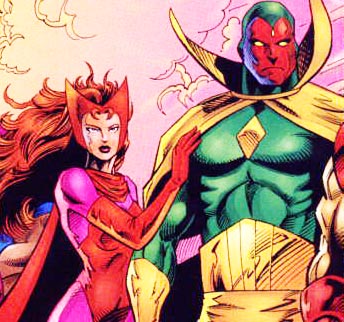 This marriage should have been our first hint that Wanda was a little cookoo. She fell in love with a Synthezoid, and he loved her back. These two even have a couple of super kids running around the Marvel U. Since Vision’s been torn apart and put back together so many times it’s been hard for this couple to stay together. Also, when your wife kills you, it’s kind of hard to forgive her when you come back to life. Comics. 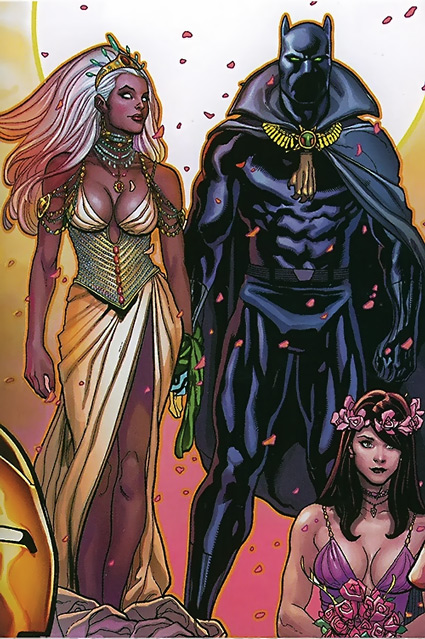 This is a true power couple. On paper, they are the perfect match. Match.com would pair an African King with a weather goddess. The King and Queen of Wakanda brought together the X-Men’s sometime leader, with the long time Avenger. Storm also joined the Avengers for a short time with her then husband T’Challa. Sadly, their marriage was annulled by the Black Panther when the Avengers vs. X-Men crossover tore them apart.

5. The Wasp and Hank Pym 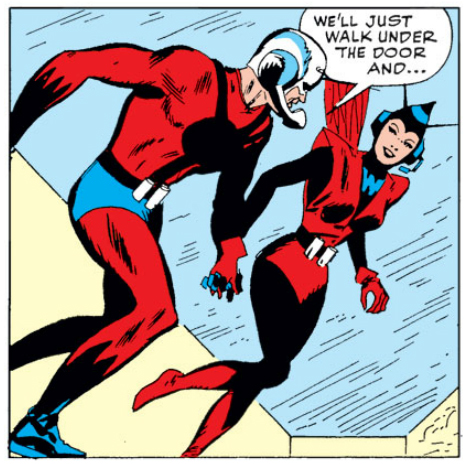 Hank and Jan are one of the oldest couples in Marvel history. They’ve also had one of the rockiest relationships in the Marvel Universe, and together they’ve had more costume changes then 10 Tina Turner concerts (maybe that will be next week’s top 10). Hank is usually the cause for all the trouble, even going so far as to physically abuse Jan. She has not always stuck by him, but sometimes he was a Skrull, so that’s understandable. Hank and Jan are a perfect example of how complicated love can be. 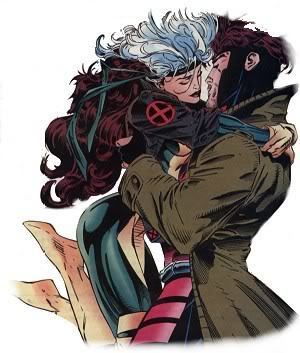 Gambit loves a challenge. What could be more challenging than loving a girl you can’t touch? Before Gambit came along, Rogue was one of the loneliest characters in comics. She lived her whole adult life avoiding the touch of any other person. Gambit came along and loved her anyway. This charming rogue could have almost any woman he wanted, so naturally he wanted the one woman he couldn’t have. These two heroes became poster children for love that goes beyond physicality.

The King and Queen of the Inhumans have ruled their kingdom together for years. Black Bolt’s inability to speak without killing everyone around him hasn’t stopped Medusa from knowing and loving her husband. They don’t need to talk about every little thing. Medusa just understands Black Bolt, and he loves her for that. 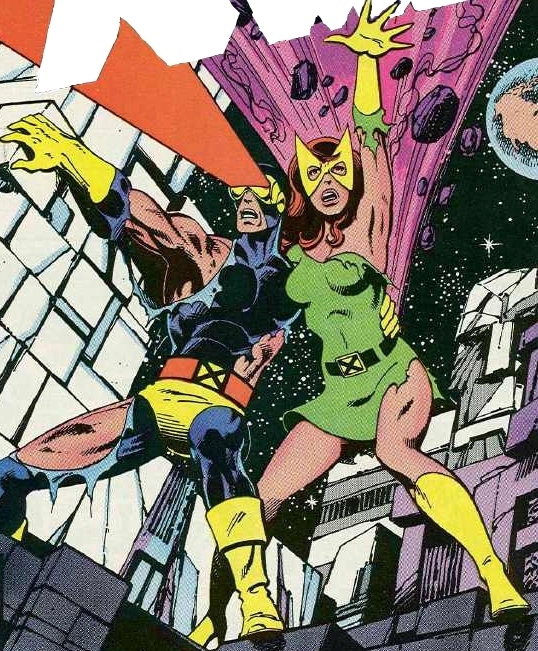 Scott Summers and Jean Grey were X-school sweethearts who grew up, got married, and had a bunch of alternate dimension kids and grandkids. If you’ve been following this couple from the beginning you’ve probably lost track of all the ups and downs they’ve been through; but one thing is certain, their love has had a profound effect on the Marvel Universe, and the X-Men Universe in particular. 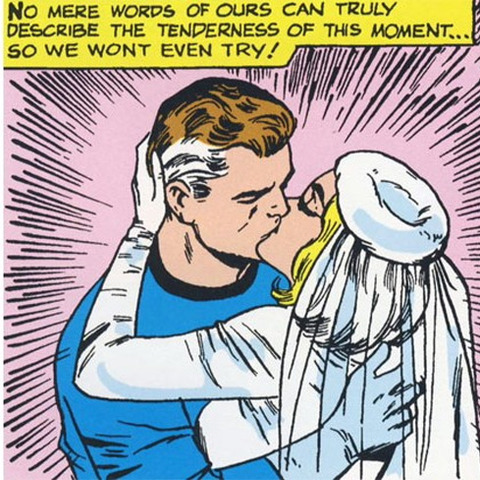 When we last saw these two, they were recreating the multiverse. They’re called Marvel’s first couple for a reason – not only because they were the first couple in the modern Marvel universe to be introduced, but they have also been the most consistent. They are one of the few couples on this list that is still together. The Fantastic Four has always been about family. The thing about love, and why it’s so powerful, is that it creates and guides all human life. The Richards family started out with the love these two shared, and is now responsible for creating millions of lives and worlds. Love. One of the most powerful forces in the universe!