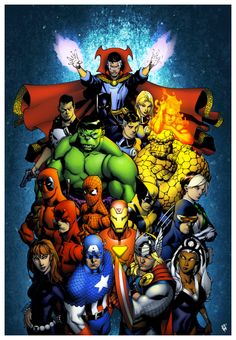 Rather see a video than read? Check out our Top 10 Marvel Artists of All Time video here! https://youtu.be/uUatD0-ctM0

With so many legendary artists working for Marvel over the past 75 years, narrowing it down to ten was bound to leave some amazing talents out. When names like Bill Everett, Neal Adams, Alex Ross, Jimmy Cheung, and Joe Madureira are honorable mentions, you know it’s a great list. Here are our Top 10: 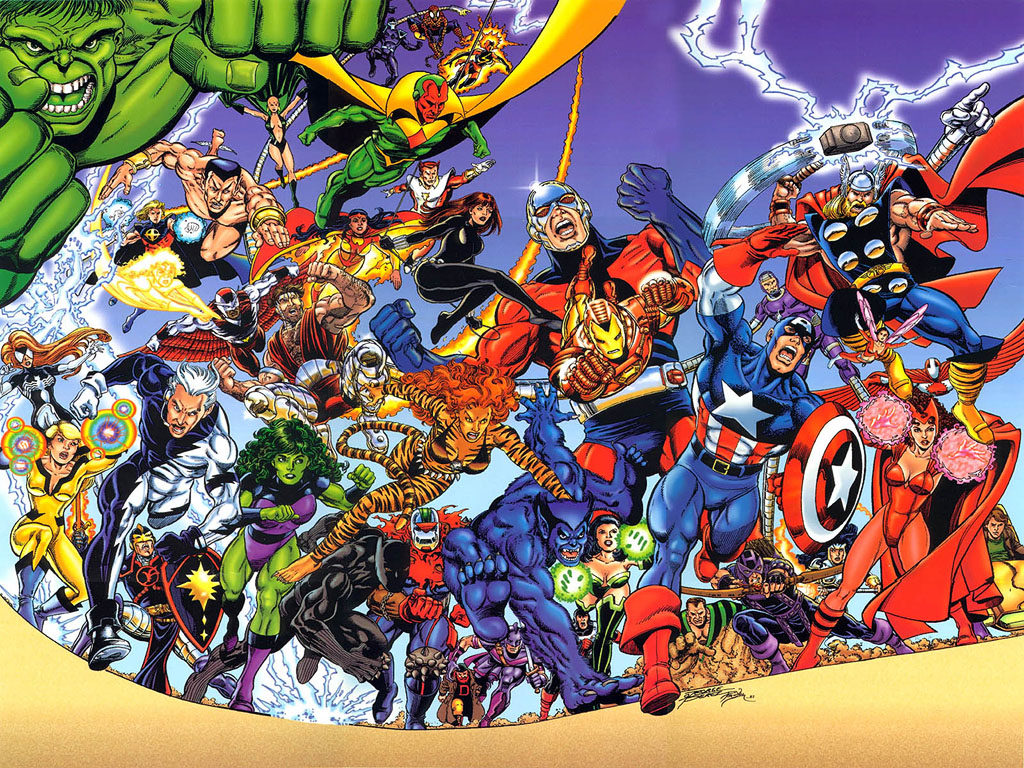 From his earliest days on the Avengers, to the Infinity  Gauntlet and Hulk Future Imperfect, ‘Jumping’ George Perez put more detail in one panel than most artists do on a whole page, and no one is better at cramming 853 superheroes into one issue. That’s why when Marvel and DC decided to cross over their two biggest superteams, there was only  one man for the job – George Perez. 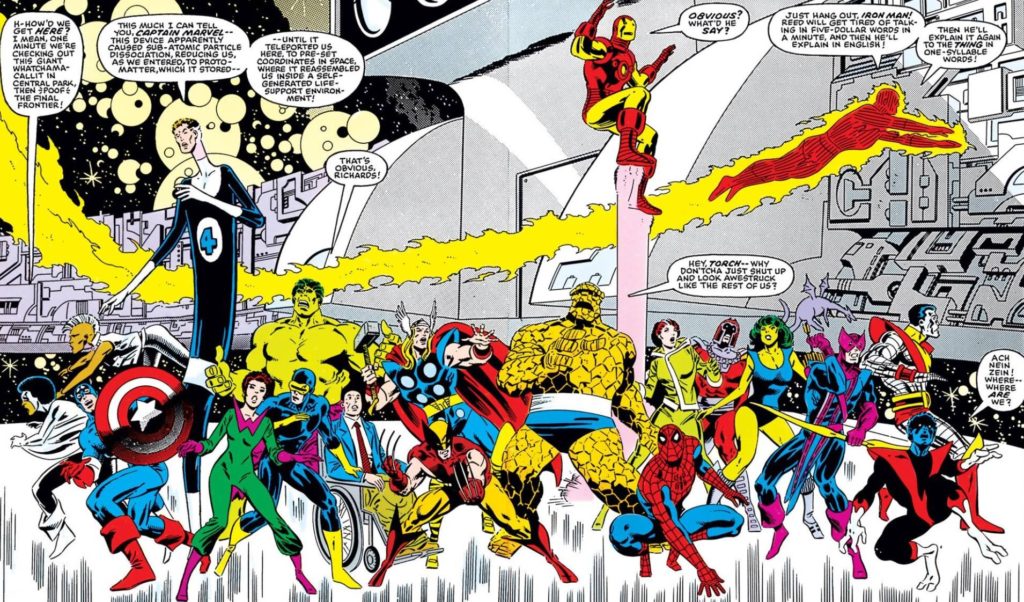 For ten years Zeck was one of Marvel’s most dynamic artists. His action packed work with Spider-Man, Captain America, the Punisher, and Shang-Chi inspired many later artists, but he reached his zenith illustrating instant classics like the first Secret Wars and Kraven’s Last Hunt. 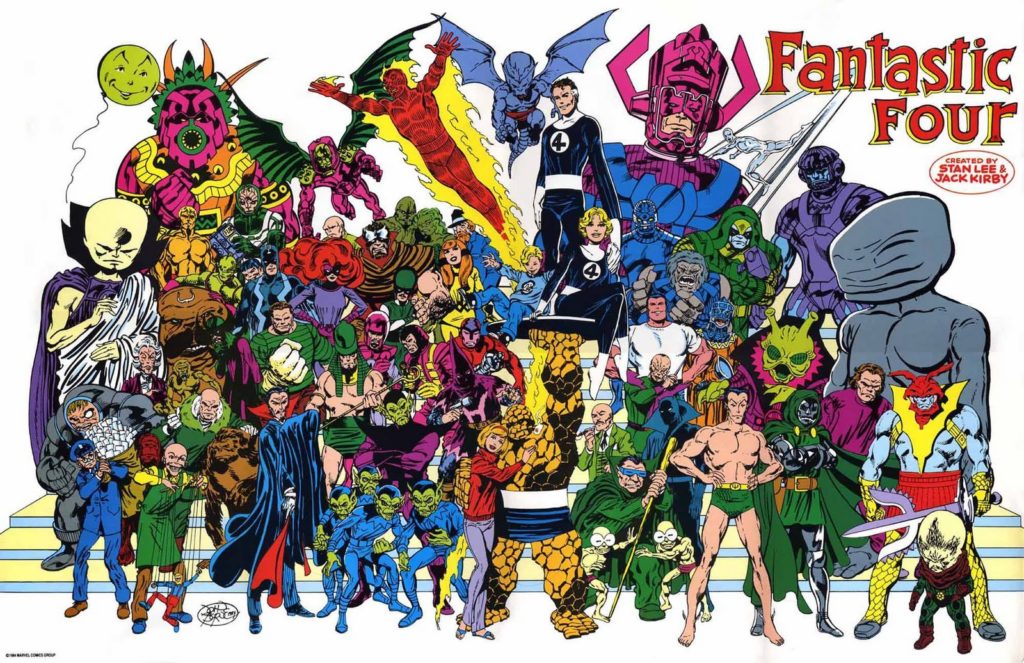 Contributing to such seminal stories as the Dark Phoenix Saga and Days of Future Past, John Byrne’s classic late-70’s/early-80’s Uncanny X-Men run, along with collaborator Chris Claremont, highlighted a major era in Marvel’s publishing history for the mutants. Providing foundational character-defining moments for Wolverine would help popularize and transform the Canadian mutant into a cornerstone for the publisher, while also adding to the X-gallery, including such beloved characters as Kitty Pryde (aka Shadowcat) and the Alpha Flight.

After X-Men, Byrne’s debut as writer-artist ushered in a renaissance for Marvel’s first family, the Fantastic Four and delivered defining runs on Captain America, the West Coast Avengers, and Alpha Flight among others. 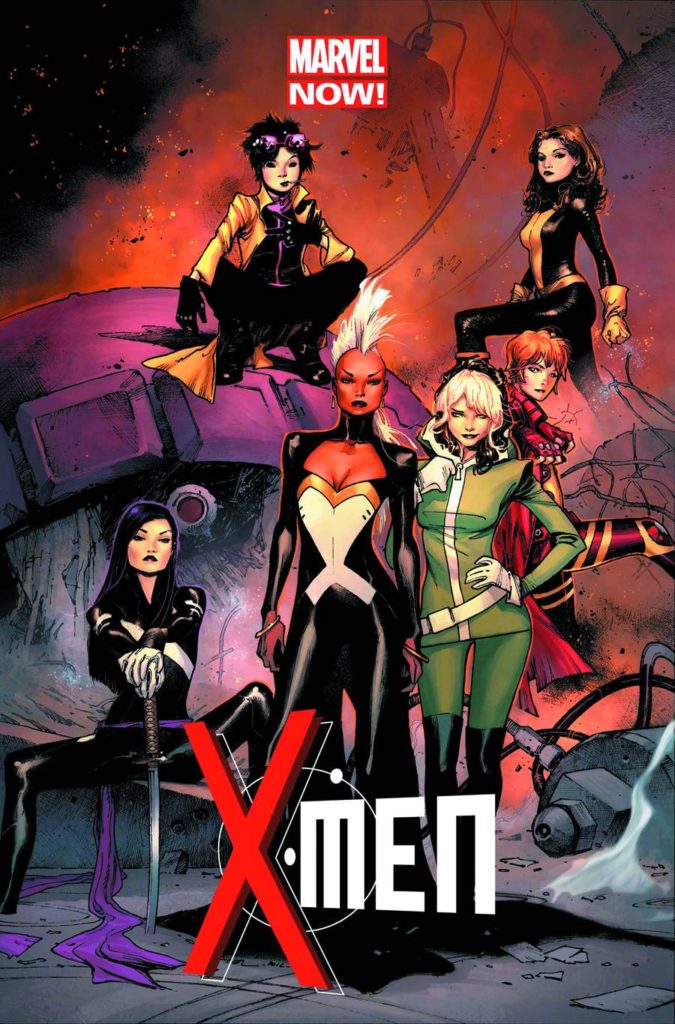 People closest to me know that Thor is my favorite character of all time. It helps that my first exposure to Olivier Coipel was in Marvel’s Thor title of 2008 which was written by the legendary J.M. Straczynski and penciled by our boy, Coipel. Many times our minds do the heavy lifting when it comes to immersing us in the action of a comic book. Pictures act as guides that highlight and accentuate key “BAM” and “WHACK” moments. Coipel doesn’t need your minds help for you to feel the gust of a whiffed punch rushing past your face or the creaks and moans of brawn and steel as two titans grapple and pummel in the city streets. You can both hear and feel them! Each page is full of blurring sequences and character-positioning that captures the true intention of every foretold motion. I highly recommend any book that this guy draws. 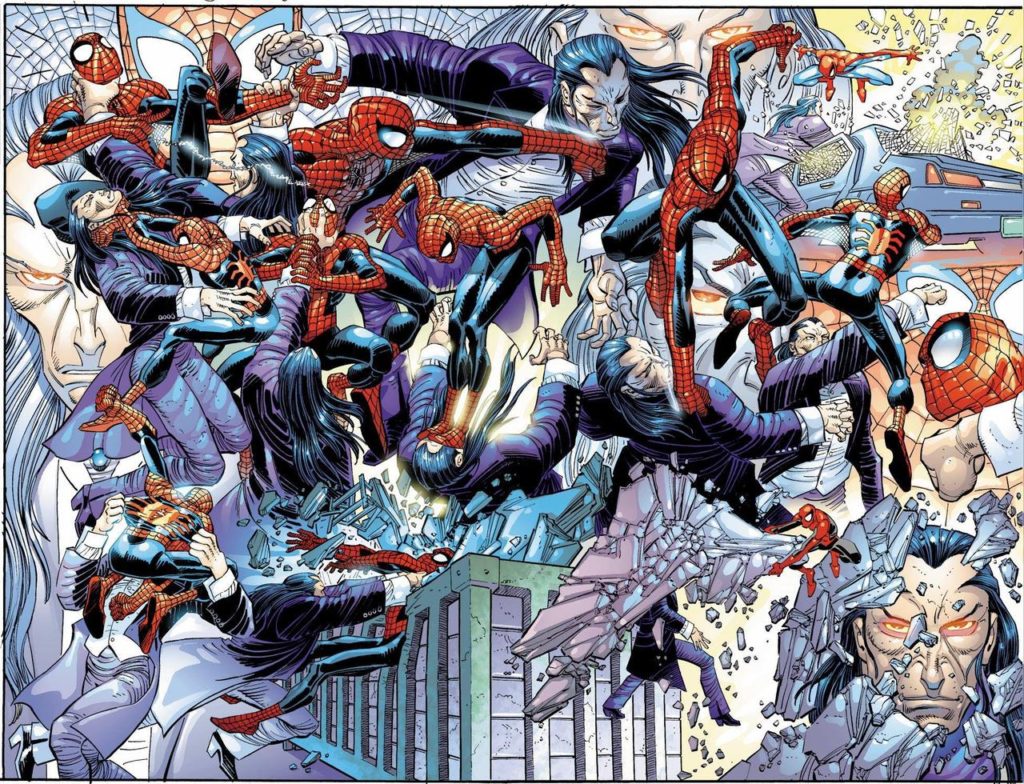 John Romita, Jr. has a lot to live up to being the son of the famous Marvel artist, John Romita, Sr.  However, he stands on his own two feet when it comes to Marvel’s main heroes.  His iconic career has taken him from Iron Man to Daredevil to Wolverine and most notably to the Amazing Spider-Man.  JR Jr’s classic style with a modern take has earned him a place among the Marvel’s Top 10 artists of all time. 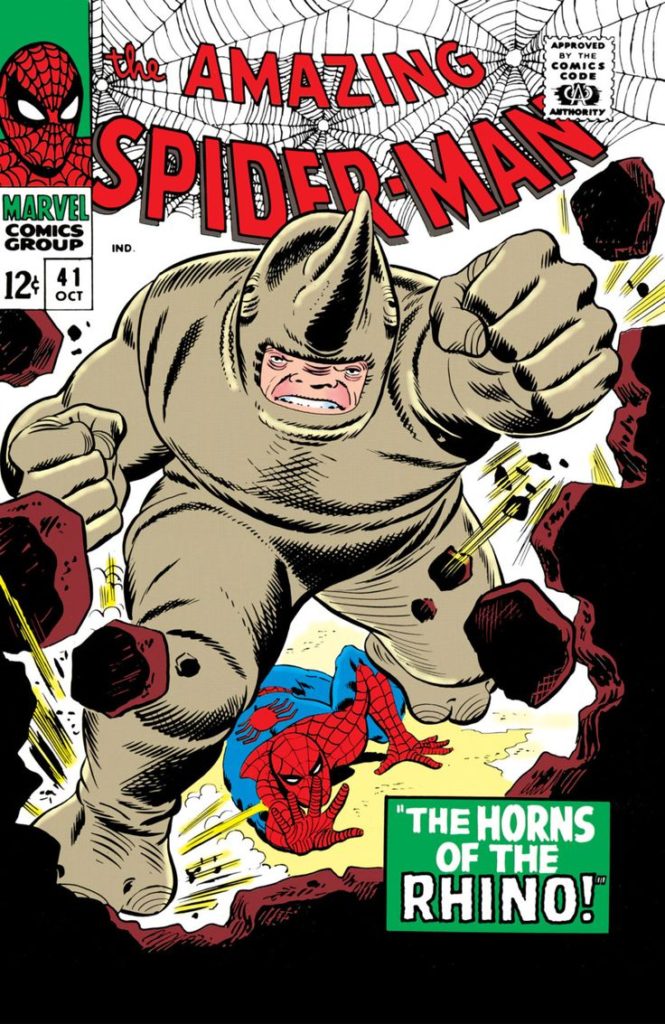 Known for definitive runs on Daredevil and Spider-Man and a multi-decade stint as Marvel’s art director, John Romita was essential in designing the look of the Marvel Universe. Among Romita’s contributions to the Marvel U: Wolverine, Mary Jane Watson, the Kingpin, Luke Cage, the Punisher, Hobgoblin, and Doctor Voodoo. 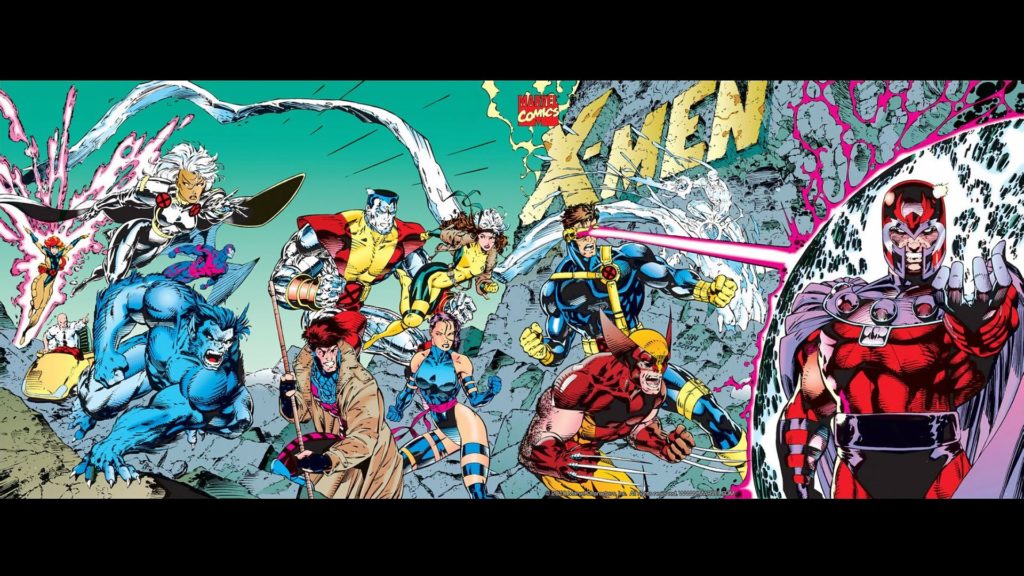 If your first exposure to the X-Men in the 90’s was through pop culture, chances are it’s attributed to Jim Lee. He influenced the X-Men animated series, the Pizza Hut promotion, and the video games you may have played throughout the 90’s. From humble beginnings in the Midwest, the guy who used draw Alpha Flight in the late 80’s brought us the best selling comic book of all time and ended up publisher of the Distinguished Competition. It’s hard to believe that the Harvey, Inkpot, and multiple Wizard Award winner was once told by Marvel’s editorial that his work was inconsistent, stiff, unrealistic, and didn’t suit Marvel’s particular standards. From Ninja Turtles to Max Faraday to Gen 13 to Batman and X-Men, the little man in the ball cap truly has the Midas touch. 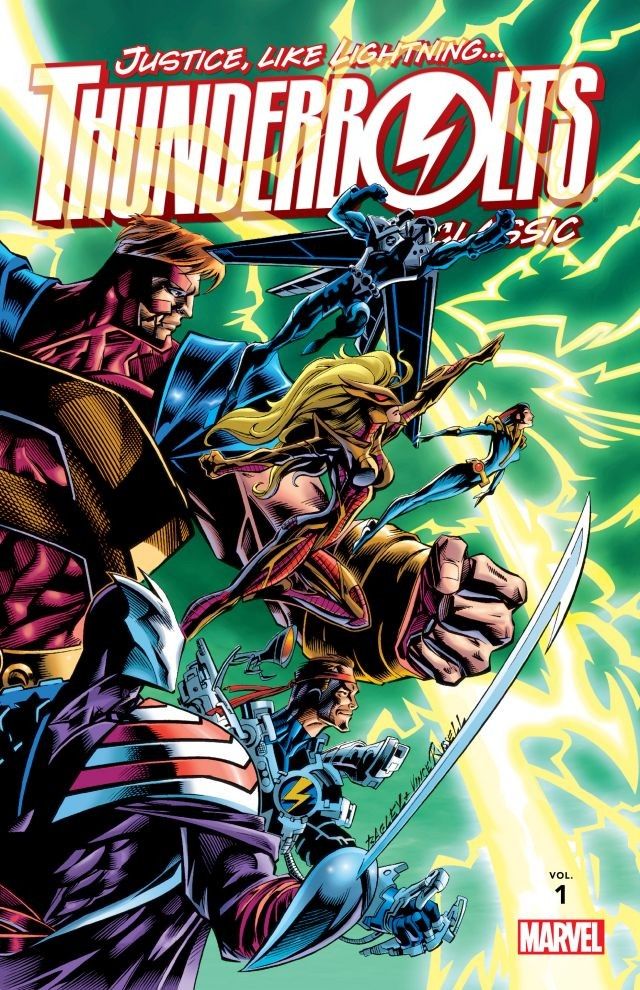 No artist has provided more consistent, quality work for Marvel over the past 25 years than Mark Bagley. Since winning the Marvel Try-Out Book contest, Bagley has brought his dynamic style to each of Marvel’s flagship books, from Spider-Man, both Amazing and Ultimate, to the Avengers and Fantastic Four. Currently providing art for the X-Men, Bagley continues to produce fun, energetic comics month after month. 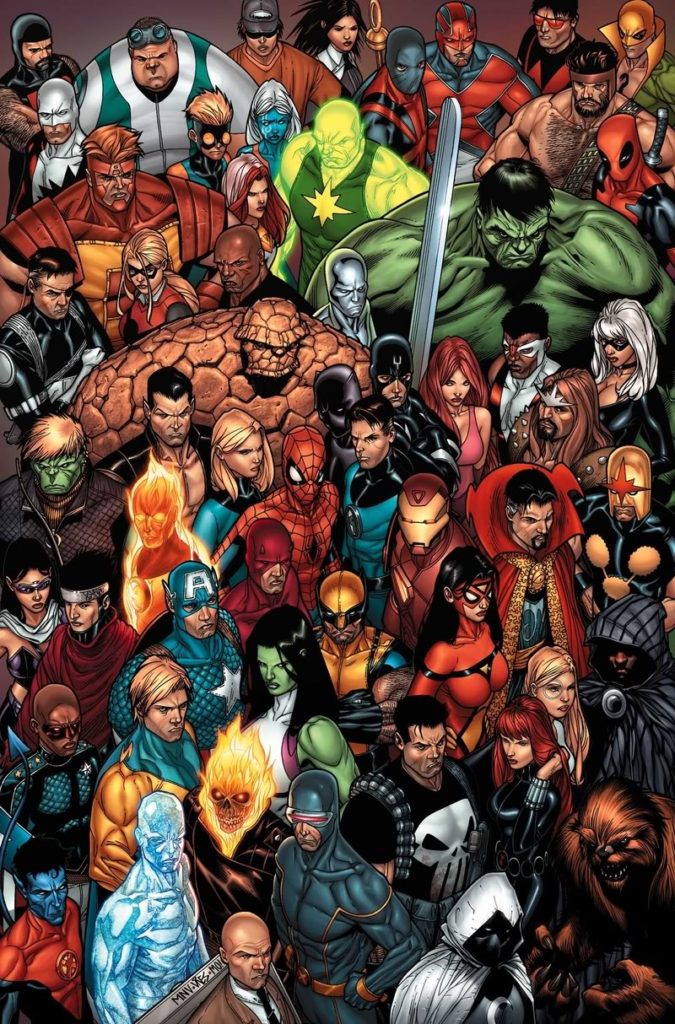 When Marvel wants fans to read a comic, they enlist the art duties of Steve McNiven. Whether it’s the Inhumans or Civil War, Marvel utilizes McNiven for their major projects. McNiven’s realistic but clean style makes him the go to artist for almost every major Marvel character. Only one person was able to beat him for the top spot which demonstrates just how much this man’s art is loved. 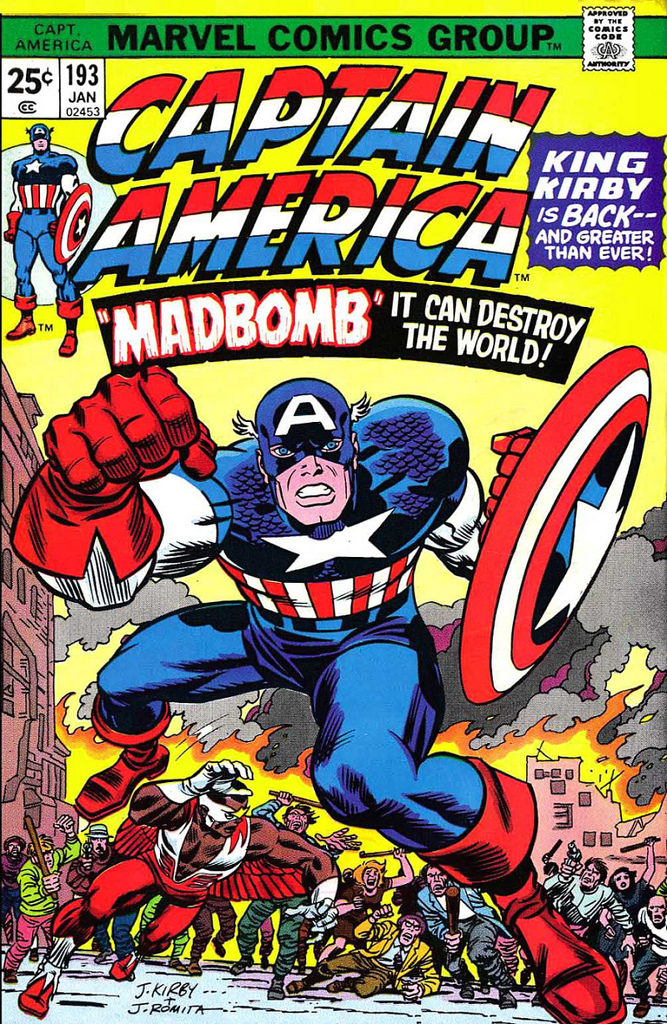 There wouldn’t be a Marvel Comics without this man. Stan Lee is awesome and has a descriptive, energetic, and captivating writing style that was vital to the creation of the Marvel Age of characters, but without dynamic and vibrant art leaping off the page, who really cares? Every panel Kirby drew was full of action, and helped define comics for the modern age. His signature “Kirby Krackle” is still a standard visual language that most artists use to convey energy in comics. Author Jeffery Kripal eloquently wrote on the Krackle saying, “These metaphysical energies… constitute the secret source of Kirby’s art.” His work on Captain America, The Avengers, Thor, Fantastic Four,Black Panther, and The Eternals (if only to name a sparse few), has defined those characters to this day. He was also responsible for the first and most iconic image of Spider-Man with the cover of Amazing Fantasy #15. He’s called “The King” for a reason, and this is why he is the greatest Marvel artist… scratch that… the greatest comic book artist of all time.