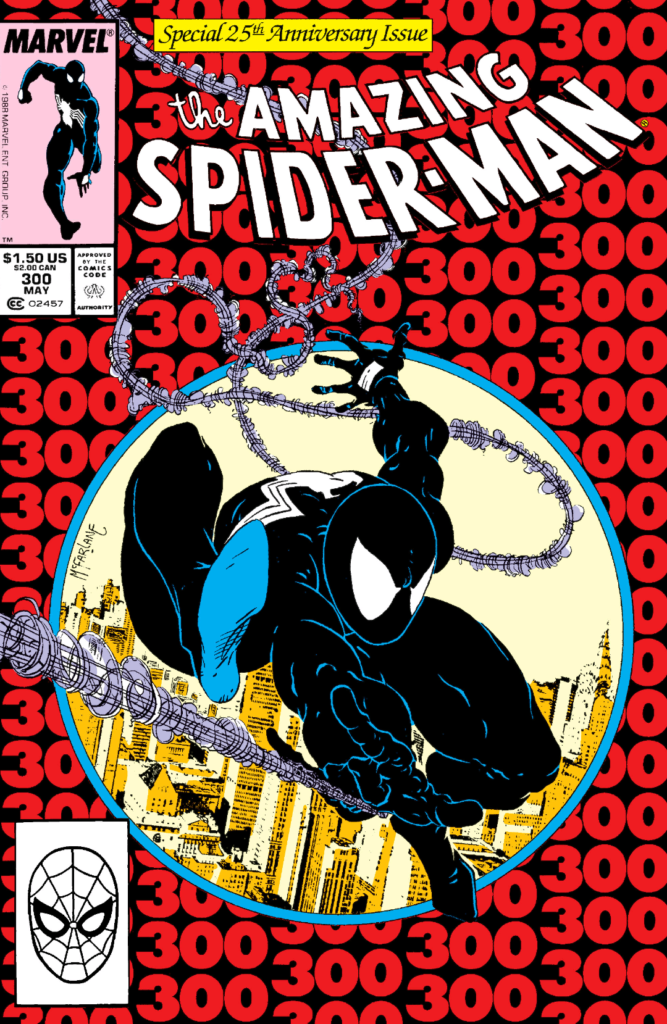 This is the third issue into McFarlane’s classic Spider-Man run and the 25th anniversary of Spider-Man’s first issue (technically released March, 1963 – so 25 years and three months, but close enough). It is truly valuable for being the first full appearance of Venom (he appeared partially and off panel in issue 299) and the reveal of Eddie Brock as the Venom. It is also, in the final frame, Spider-Man’s return to the classic red and blue uniform he’s known for since Secret Wars #8 (December, 1984).

This issue starts with a weeping and cowering Mary Jane huddled in the corner of her and Peter’s New York apartment. Peter swings in from presumably crime fighting to find her and quickly runs to her side. She talks about a large man in his old uniform that broke into their apartment and threatened her. She no longer wants to stay in their apartment now that a villain knows Peter’s alter-ego and she’s not safe. We then shift to see what appears to be an extremely muscular Spider-Man go into a rundown apartment. Walking through the shadows the costume sheds off the figure to reveal it is Eddie Brock. Next it is back to Peter and Mary Jane, now in a hotel room, and Peter recounts the basics of the alien saga as he’s already figured out the symbiote that was attached to him is probably who is on this other figure. The next morning Peter agrees for Mary Jane to search for a new and nicer apartment especially since she makes a good bit of money as a model.

Spider-Man goes on patrol and gets the sonic gun Reed Richards created to get the symbiote off of him in case he runs into this new villain. Later Mary Jane and Peter find a new apartment before going to dinner at Aunt May’s house. Mary Jane reassures Aunt May that even though her and Peter are newlyweds they still love and want Aunt May in their life. At the same time the couple are eating dinner, Eddie attacks and kills a cop after breaking into a church. 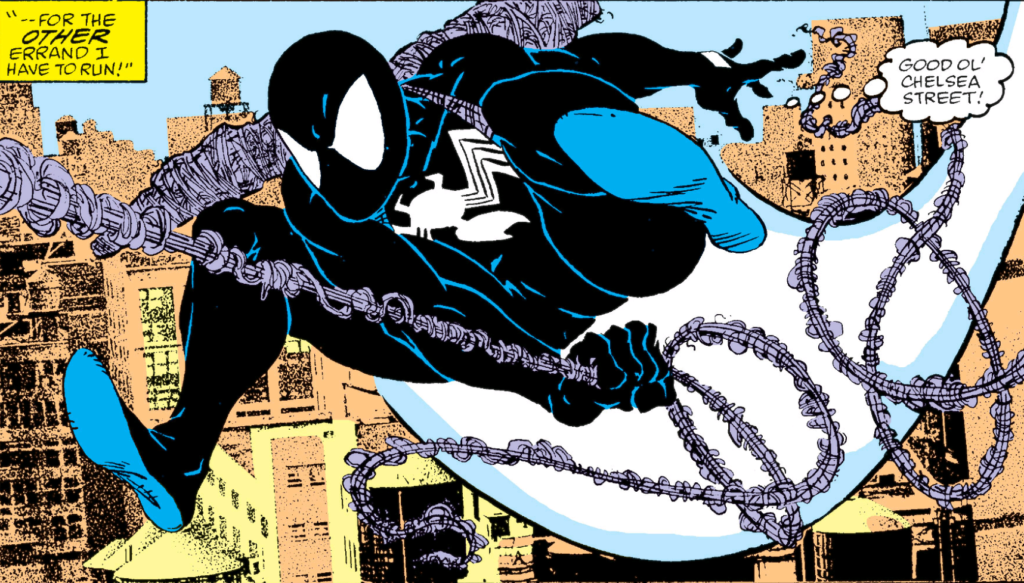 The next day Mary Jane and Peter have a move in party at their new apartment because I guess they’re too cheap to pay for movers. At the party, Robbie Robertson gives Peter an idea and he goes on patrol again for the new villain. He finds him and when he goes into Eddie’s apartment following the figure he is attacked by the new villain, a muscular and sadistically grinning version of himself. He finds out the name of the villain is Venom and that Eddie Brock is under the costume. There is an expositional backstory of how Eddie Brock became Venom, and then the two fight. Spider-Man gets the upper hand for a minute and tries to flee to recalculate his attack, but is attacked again by Venom who wasn’t as down-for-the-count as Spider-Man thought he was.

Spider-Man is knocked out and wakes up to find himself webbed to the inside of a giant church bell by a priestly robed Eddie Brock. Spider-Man is able to break himself free and assumed that Eddie as Venom used too much webbing to tie him up; the symbiote is not as strong as their first encounter. Spider-Man is able to knock Eddie off the top of the church they are fighting on, and Eddie falls unable to make adequate webbing. 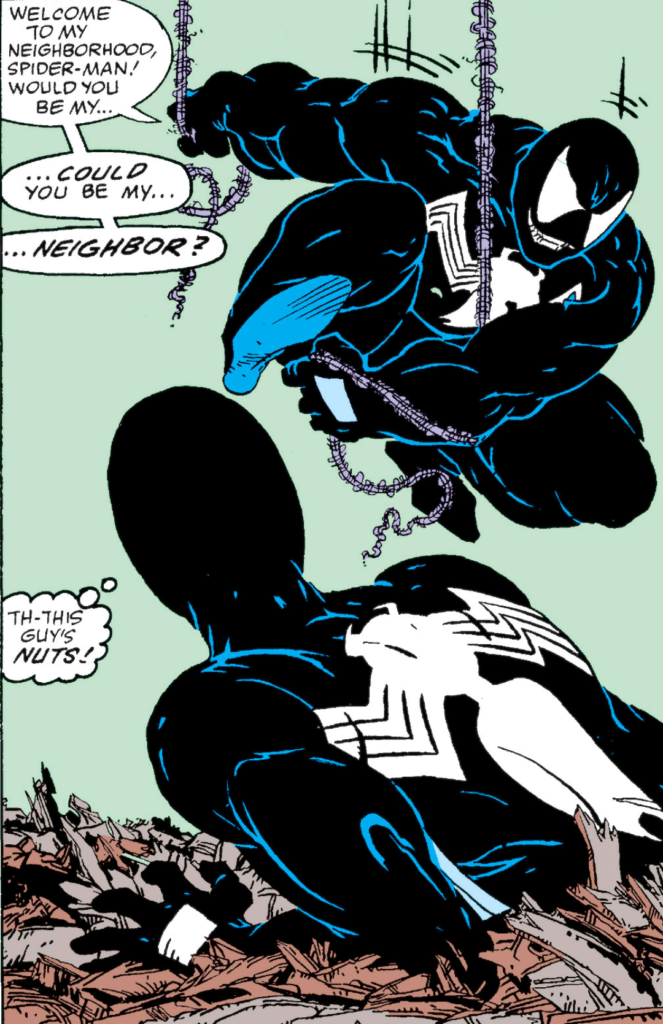 Spider-Man then takes Eddie and the symbiote to the Fantastic Four where the current leader, Thing, puts him in a holding cell specifically designed by Reed back when he first helped Spider-Man get rid of the symbiote. Back home after a long night, he and Mary Jane have a small argument over his costume. She feels unsafe around the black and white suit after being attacked by Venom and never wants him to wear it again. Spider-Man disregards the suit and goes back to his traditional and original suit again.

As it should be assumed with most comics that came out prior to the year 2000, this comic probably has much more exposition than most people are used to if you’ve only read modern comics. If you aren’t turned off by exposition, especially in the case of great writers (and Michelinie is one of my favorite Spidey writers, so I think this goes for him), it can really create a richer and fuller reading experience. Especially in the case of this issue, there are two expositional flashbacks, which if you hadn’t read those issues (or in my case hadn’t read them in a few years) give both a great synopsis of the symbiote saga and of Eddie Brock’s back story. This really is an exceptionally well written issue. 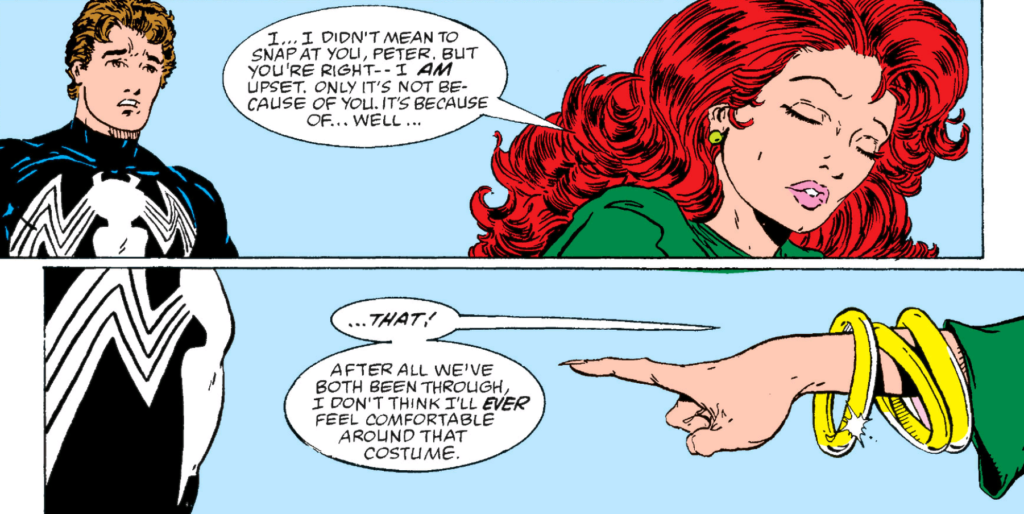 McFarlane’s art is exceptional as always. He was a true master as drawing Spider-Man in action and has been mimicked ever since by most all Spider-Man artists. That said though, there are a few scenes of Spider-Man swinging over the city that appear to have a poorly photocopied image of the city imposed behind a swinging Spider-Man. Those images are a bit disappointing especially since it is so obvious in other panels that McFarlane can actually draw buildings. I’m not completely sure what is going on in those few select panels, but they were a bit detracting and pulled me out of the story.

First and foremost, this is a must read for any fan of Venom regardless of the era you first got into him. This issue has Venom’s origin story and first appearance, so especially if you don’t have the time to read through the entire Alien Saga (but you should try to find the time) this issue has some great recaps which sadly don’t really happen that much in comics anymore. I’d recommend buying it digitally or in a trade unless you’re a hardcore Spider-Man collector because this one is one of the more expensive Spider-Man issues. Regardless, this is a quintessential issue, not just for Spider-Man, but for Marvel, so I highly recommend checking it out.