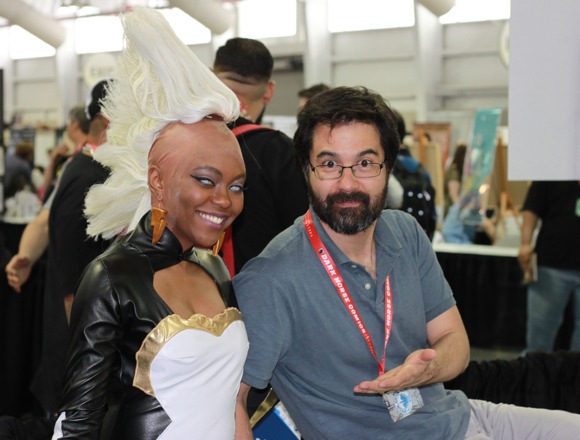 Do you hear that sound? The trumpets have sounded and we have been blessed to interview the one and only Greg Pak! Mr. Pak is the current writer of Storm, one of the best Marvel books on the shelves today! Greg sat down with Jarid and kindly granted an interview about all things Storm!

Jarid: Storm’s been involved with a variety of different characters since her creation. She seems to have a king of some sort always trying make her a queen (Khan, Arkon, etc). She’s been seriously linked with Forge and Wolverine and married Black Panther. She also has had brief romances with Cable and Slipstream. Which of those romances did you prefer? Do you prefer her with someone or single?

Greg Pak: I’ve been concentrating on writing Storm as the hero of a solo book, and while I’ve written both Wolverine and Forge into the book, the emphasis has been on Storm’s individual decisions and responsibilities as a hero rather than how she’s working as part of a couple. So the honest answer is that right now I prefer her solo — because that’s what works for the stories in my head at the moment.

That being said, I had a lot of fun with the Wolverine/Storm scenes in issue #2. I’m always interested in contrasts with characters, and Wolverine’s and Storm’s attraction despite (or because of?) their differences were fun to play with. I also liked that brief chance to write about a grown up romantic relationship that’s just a supporting part of the story and not its central driving force. I think those kinds of everyday moments can bring out character and make fantastical stories feel real in a very good way.

Storm has led the X-Men (in one capacity or another)almost since her first appearance in Giant Sized X-Men until she married Black Panther and moved to Africa. Since she’s returned to the team she’s taken a huge step back to Cyclops, Wolverine, and to some degree Rachael Summers/Grey. How do you feel about Storm taking a backseat? When you think of great X-Men leaders, does Storm instantly come to mind?

I love those classic issues when Storm kicks much butt and claims leadership of the X-Men despite being depowered. But sometimes you get better stories for a solo character when he or she isn’t leading a team or kingdom or empire. One of the ongoing challenges of characters like Namor and Black Panther is how to tell stories that don’t slip always into palace intrigue or the burdens of the monarch. Now I’m a sucker for palace intrigue and the burdens of monarchs, but in ongoing serial superhero storytelling, it’s nice to have variety. So I’m happy to have come on board with Storm at a time when she’s not leading an entire country or an army. At some point, of course, that kind of story would be a blast to write, too. But right now, there’s a ton of fun stuff we can do with Storm as a renegade or rogue that wouldn’t have been as possible at different times.
In other interviews you’ve hinted that the mohawk may soon be making an exit. But what Storm hair do you prefer? She’s had the long flowing mane, chopped off with two strands in the front (Joe Mad), bald, short, high ponytailed (X-Treme), etc.

I love the mohawk because, like many of us, I have a huge amount of affection for stuff I first saw when I was fifteen or sixteen. I also love that the mohawk had an emotional story point behind it — Storm was rethinking a lot of things about herself and cutting loose, and the mohawk was part of that. And that’s fit in nicely with where we’ve been going with the current series, so it feels like a good match.

But in time, that’ll change. And it’ll be awesome when it happens. And then at some point thereafter, the mohawk will come back. And that will be awesome, too. 😉

Storm’s appeared in every incarnation of X-Men in animated form – what’s your favorite and why?

Terrible confession: I haven’t watched enough of the cartoons to have an opinion!

How far have you plotted the Storm solo title?

We have a plan that goes through issue #12. It’s gonna get huge, on every level. 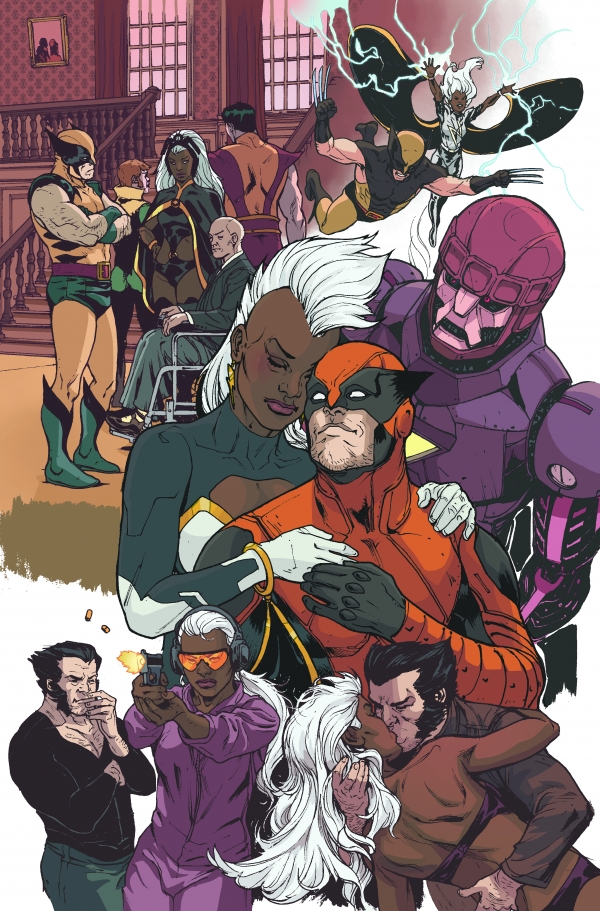 Seeing as I definitely don’t want to see Storm cancelled, what can Storm fans do in order to increase visibility for the book?

Most importantly, call or visit your local comics shop and preorder the book. Tell them you’d like to create a “pull list,” and you’d like to put every upcoming issue of “Storm” on that list. Then the shop will order them for you ahead of time and “pull” them for you, holding them for you until you pick them up. That helps books thrive because when people make pull lists, stores know there’s a demand and order more issues as a result.

Secondly, spread the word among your friends, both in real life and online, and encourage them to buy the book. Posting your personal reactions and reviews on blogs or social media can make a difference, particularly among your friends. I buy books every week because friends I respect talk them up. Word of mouth remains the biggest seller.

Finally, with a book like “Storm” in particular, I think there’s a lot to be said for putting the book into the hands of people who don’t necessarily buy comics regularly. At the New York Comic-Con, I had a booth in Artists Alley. And every time I put some copies of “Storm” #1 on the table, they sold out with a few minutes. I’m not even exaggerating — it typically took less than half an hour for people to snap them all up. I think “Storm” may be one of those books that has a huge potential audience that never makes it into comic book stores. The readers are out there. We just need to reach them.

And thanks so much for the question and the interest! I’ve met so many people who love the character and support the book — it means a lot to me.

Marvel’s got Captain America, Iron Man, and Thor in their own solo movies culminating in The Avengers franchise. The Inhumans, Black Panther, and Dr. Strange will soon be joining that cast. As well, Ms. Marvel has just been announced as getting a solo movie. With all the emphasis placed on these characters, why should we focus on Storm?

Because she’s awesome. Because the book dives hard into big questions of the responsibilities superheroes have for the forgotten underdogs of the world. Because as far as I know, she’s the only female hero of African descent with an ongoing mainstream comic book series right now. And because she’s a grown woman who deals with fools and villains the way we all wish we could, regardless of the consequences. It’s a fun book — I hope you’ll give it a shot!

Say I’m a brand new reader to comics or maybe just an average reader that picks up a few Marvel titles a month. Why should I add Storm to that list?

It can be intimidating for new readers to jump into a big shared comic book universe. But you don’t have to know ANYTHING to pick up the Storm book. It’s entirely new-reader friendly, while simultaneously providing huge character and plot advancement for long-time readers.

And Storm is awesome. See above. 😉

An era in Storm’s life that seems to be missed by most is the space between her killing Marrow and marrying Black Panther. Lots of exciting stuff happened with Storm during that time (Onslaught, Operation: Zero Tolerance, X-Treme X-Men, etc). What’s your favorite Storm story during that era?

I actually have a lot of affection for the over-the-top hijinks in the “Arena” storyline. Of course, I wrote “Planet Hulk,” so I’m a sucker for any gladiator-style story.

Storm’s one of, if not the longest serving member of the X-Men. Which X-Men era team do you enjoy the best? What’s your dream X-Men team?

Wolverine has Sabretooth. Captain America has Red Skull. Spider-Man has Green Goblin. Who is Storm’s #1 villain?

Callisto, probably, even though they’ve wavered between enemies and friends multiple times over the years.

Everyone knows about Storm vs. Callisto in the Morlock Tunnels, Storm marrying Black Panther, and Storm regressing to a child courtesy of Nanny. But what Storm story do you just love that isn’t widely talked about?

There’s a crazy “What If” story in which Storm gains the power of the Phoenix and freaks Kitty out by basically destroying the world. It’s amazing. Editor’s Note: This is one of Jarid’s favorite stories too!

Jean is gone. Wolverine is gone. There seems to be some tension with Colossus. Psylocke shows up sporadically. Who is Storm’s best friend? Who does she confide in?

Back in the day, it was Kitty. Right now, within the pages of the “Storm” solo, you could argue that it’s Beast. They’re mutually driving each other crazy. But they’re there for each other, time and time again. 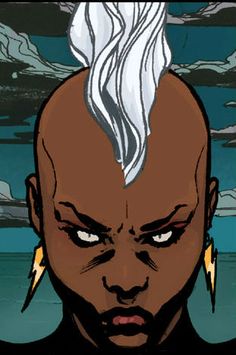 What are the central themes of Storm that you would like to get across to your readers?

The moral necessity and terrible consequences of standing up for the underdog, no matter what.

While the XSE was sort of unofficially disbanded Storm clearly held some sort of contacts as seen in Brian Wood’s X-Men run with Sabra running around at Storm’s beck and call. Will we see if she still has some connections to the world’s governments and this sort of underground support system?

Guess we’ll have to wait and see. 😉

Thor vs Storm. The new Thor. What do we have to do to see this?

I would LOVE to write that story. But it’s a bit too early in the introduction of the new Thor for that. There’s also a great story with Storm and old Thor…

Will Axis touch the Storm book? Will we see a more in-depth Inverted Storm seeing as she hasn’t really done much in the Axis main series?

Sorry, can’t answer that for fear of spoilers.

Anything else you’d like to say about the solo Storm series, Storm herself, or anything in general?

Just many thanks to everyone who’s reading and writing about the book. I’ve met so many people at cons and signings who are so passionate about the character. It’s been a blast so far and we really appreciate the support!

And of course I’d love to give a big shout out to the creative team on the book, including editor Daniel Ketchum, artist Victor Ibañez, and colorist Ruth Redmond. I think the character’s special to everyone who’s working on the book, and it shows. 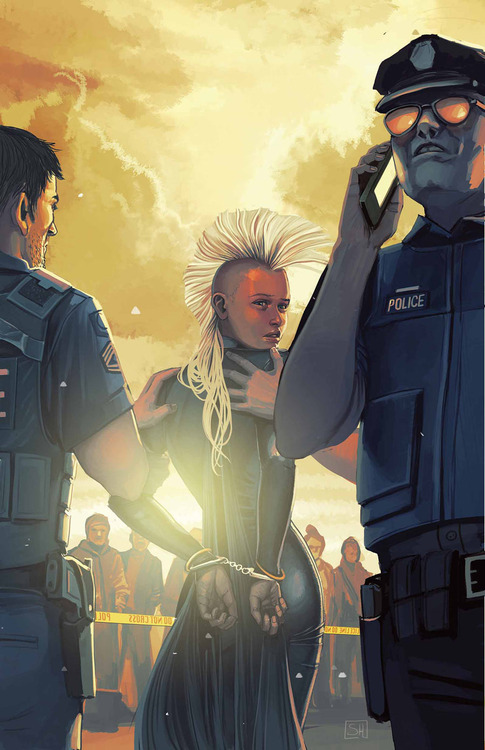