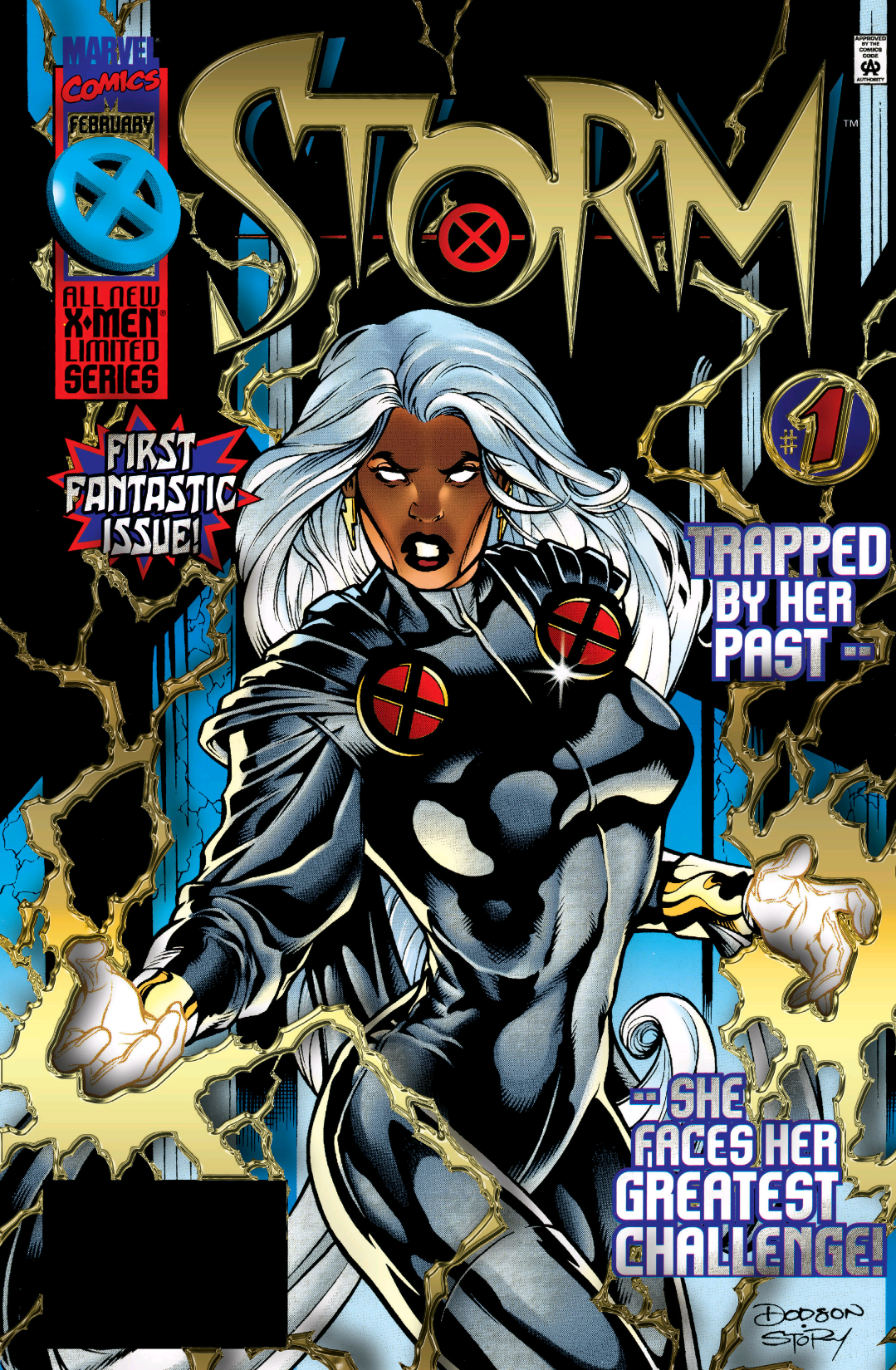 This was the first issue of the first solo series for the X-Men leader, Storm. It was launched as a four issue miniseries. This is some of Dodson’s earliest continuous work at Marvel after chipping in for a handful of issues during the previous summer’s Age of Apocalypse crossover event. 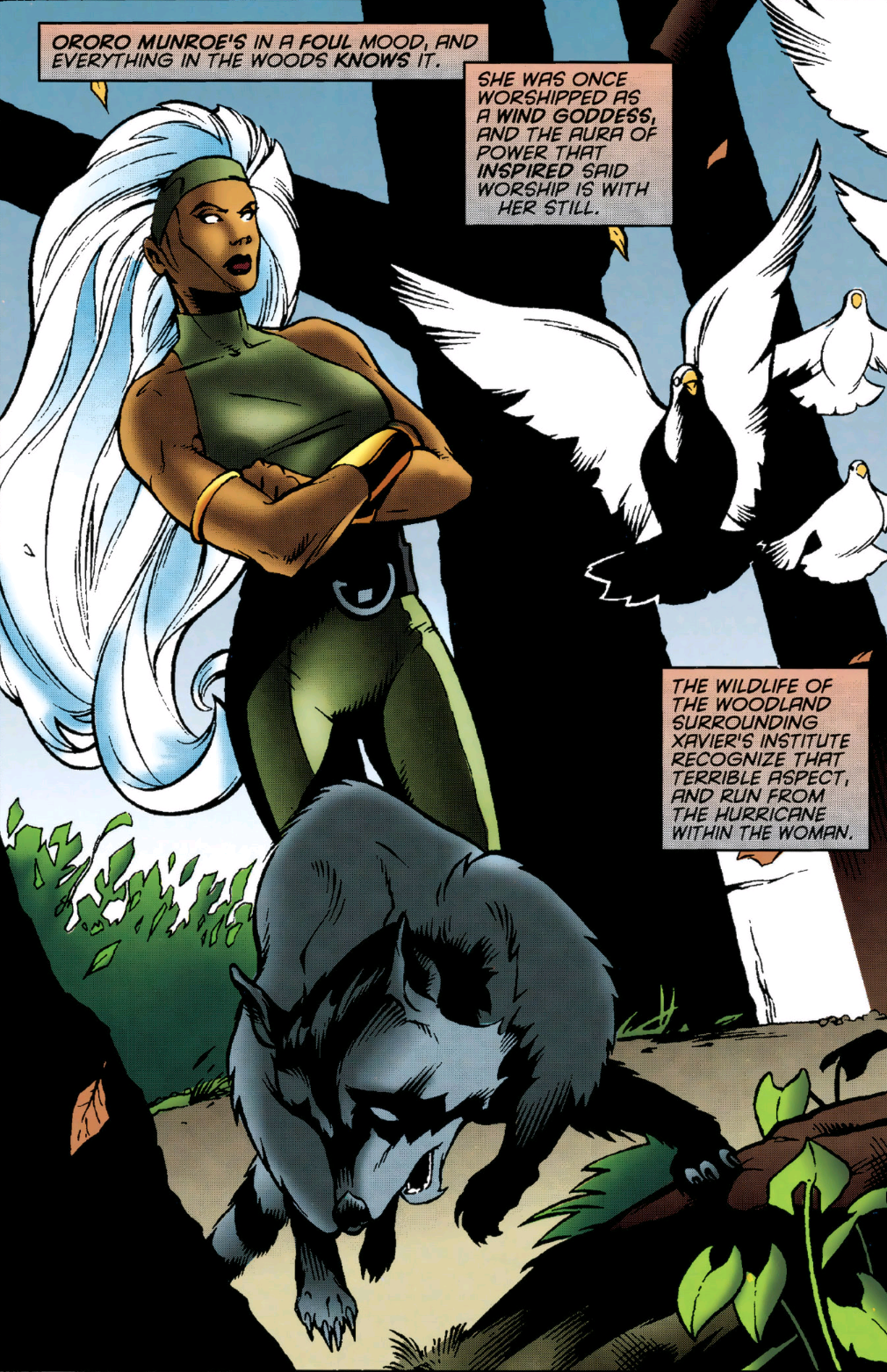 We start on Sunday night at 8:38pm in Manhattan following Cable through the Morlock tunnels. He enters an underground cathedral apparently in ruins only to find Storm dead, crushed by falling debris.

Jumping back to eleven hours prior, we see Ororo Monroe strolling through the gardens of the X-Mansion. She is in an unpleasant mood and looking for Wolverine. She finds him enjoying the scenery and eating some KFC (I’m guessing this bold action is only to test his healing factor).

Ororo confides in Logan about her guilt and obsession over murdering Marrow in the Morlock tunnels (look up the Gene Nation storyline for specifics… you’ll need to remember them to fully appreciate this miniseries). Storm feels guilty, because although Marrow left her no choice in murdering her (even though she didn’t because Marrow had two hearts and Storm only cut out one), Storm feels it was her failings as the leader of the Morlocks which even led to the rise of the Gene Nation to begin with (it was actually the actions of Mikhail Rasputin – Colossus’ cosmonaut brother).

After opening her heart to Logan, Storm reaches out to Cable a few hours later. Cable tries to console her, but when that appears not to be helping her he tells her about The Ceremony of Light, a Morlock ritual to mimic sunlight in the tunnels once a year. Cable shows Storm how to do this on his computer with a flat screen monitor (THE FUTURE AWAITS!). 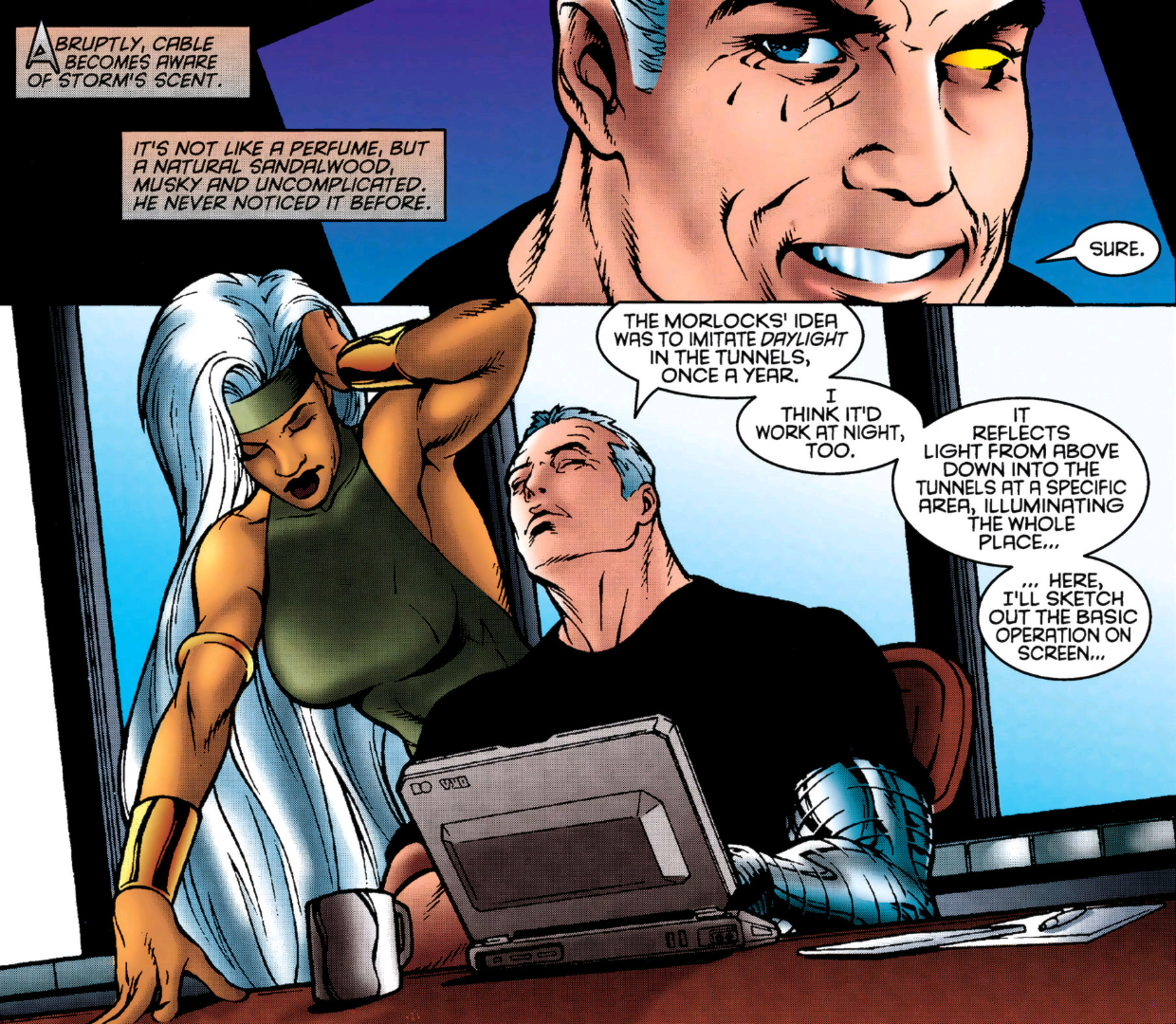 Storm then talks to Forge who (as customary in an Ellis storyline featuring these two characters) is obsessively in love with her. Storm is unsure how she feels about Forge.

Around 6:30 that evening, Wolverine find Professor Xavier in the gardens. Logan tells Chuck he needs to talk to Ororo and give her one of those fatherly speeches. Xavier says being fatherly was never on of his strong suits (this was probably a much more powerful scene at the time when this series took place directly after Age of Apocalypse).

Ororo is in the Morlock tunnels and attempting to find the temple to perform the Ceremony of Light. She sees the ghosts of those she let down and fought in the sewer system. She finds the cathedral area and sets up the reflective mirrors to engage the ritual. 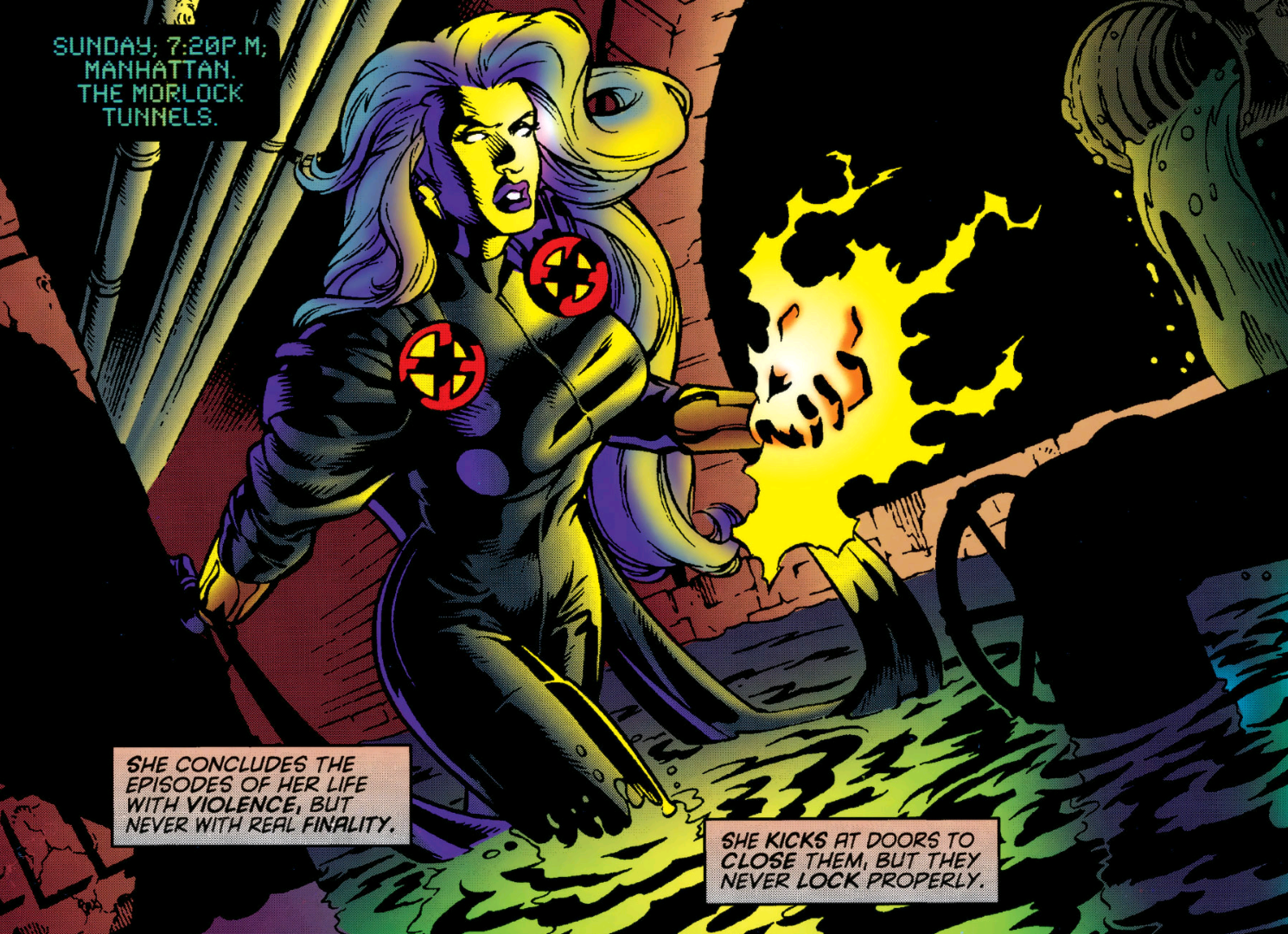 Cable is at a coffeehouse in downtown and gets a weird sense that not everything is okay with Storm.

Storm is bathing in the light of the ceremony. She finds solace in the ritual and is able to shed the guilt of her actions. As she gets ready to leave she notices a strange presence with her. A strange vortex of light opens up and a giant hand reaches out towards her. In an instance of instinct, Storm unleashes a storm of lightning against her assailant. This blows a hole in the ceiling and causes a shower of debris.

Cable returns back to the X-Mansion to tell the X-Men that Storm is dead. 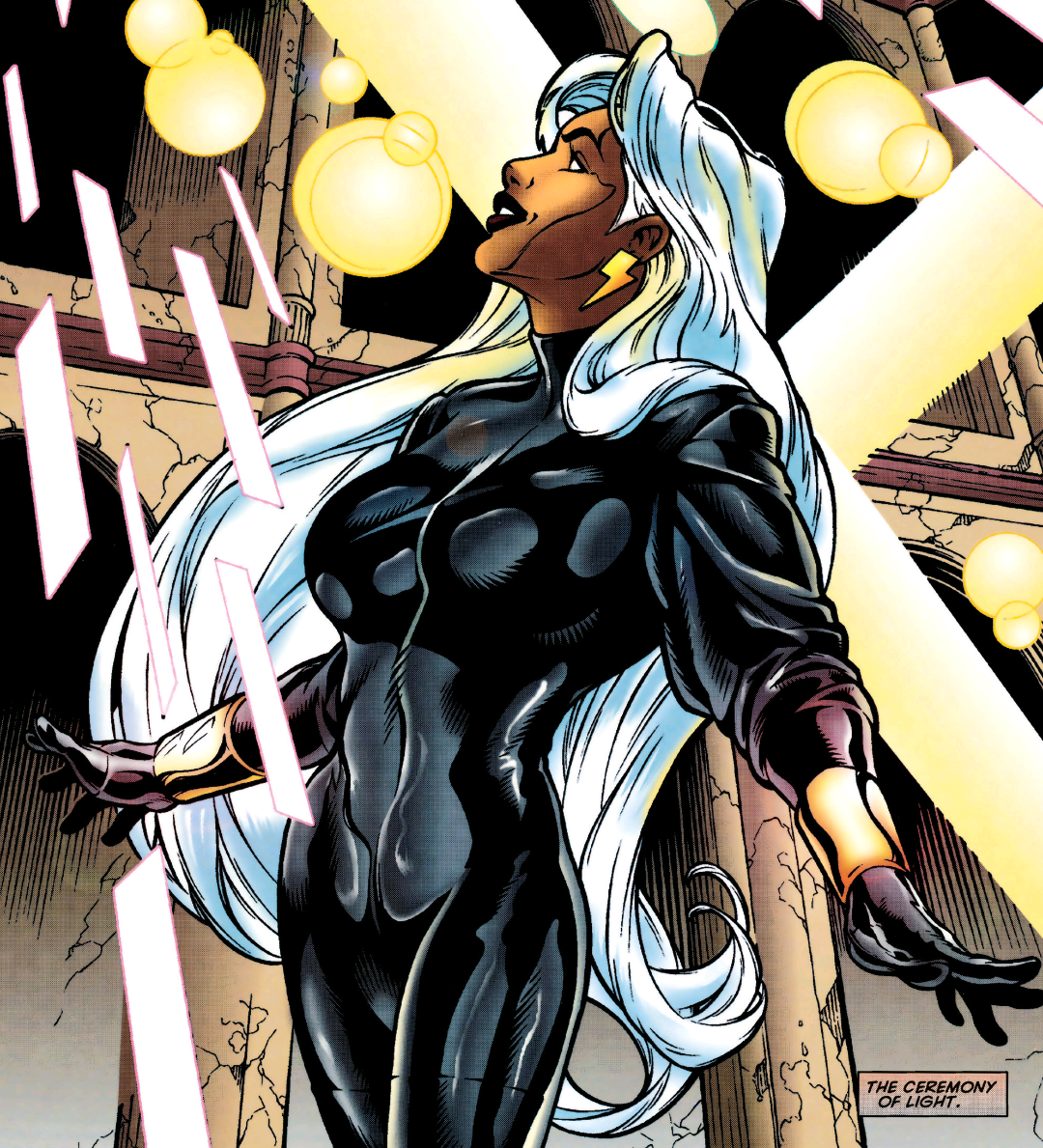 This is a strong first issue that for any X-Men reader in the 90’s was an amazing hook that drew you into the rest of the series. But after twenty years, does it still read as well? If you are a fan of this period in X-Men comics – absolutely. If the AoA to Onslaught storylines had issues you enjoyed, this one will still probably hold up.

If you’re new to the X-Men or didn’t like the 90’s, even if you’re a fan of Storm I can’t entirely recommend this issue of series. It isn’t because of the writing or the art, but you’ll get lost in the continuity of the story. Even for someone like me who read most of those stories, I had to go back and refresh myself because it had be twenty years (thanks to the marvel.wikia.com).

Ellis is solid in this issue. This isn’t his best work by far, but he has touches which are wonderful insights to the characters and give great small nuances. One criticism may be that even though this is a Storm miniseries, and even a heavily Storm-centric storyline, this could have easily been just any other X-Men issue. I get the importance of a strong supporting cast, but I think some of the better miniseries take the character completely out of their usual supporting cast and examine them thoroughly in a whole new setting. Gambit, Hawkeye, Cyclops, and even the latest Storm series all seem to do this slightly better. I just felt this could have been a Storm and Cable miniseries as much as a Storm miniseries. I didn’t keep on reading, so this may level out to a stronger Storm-centric story. 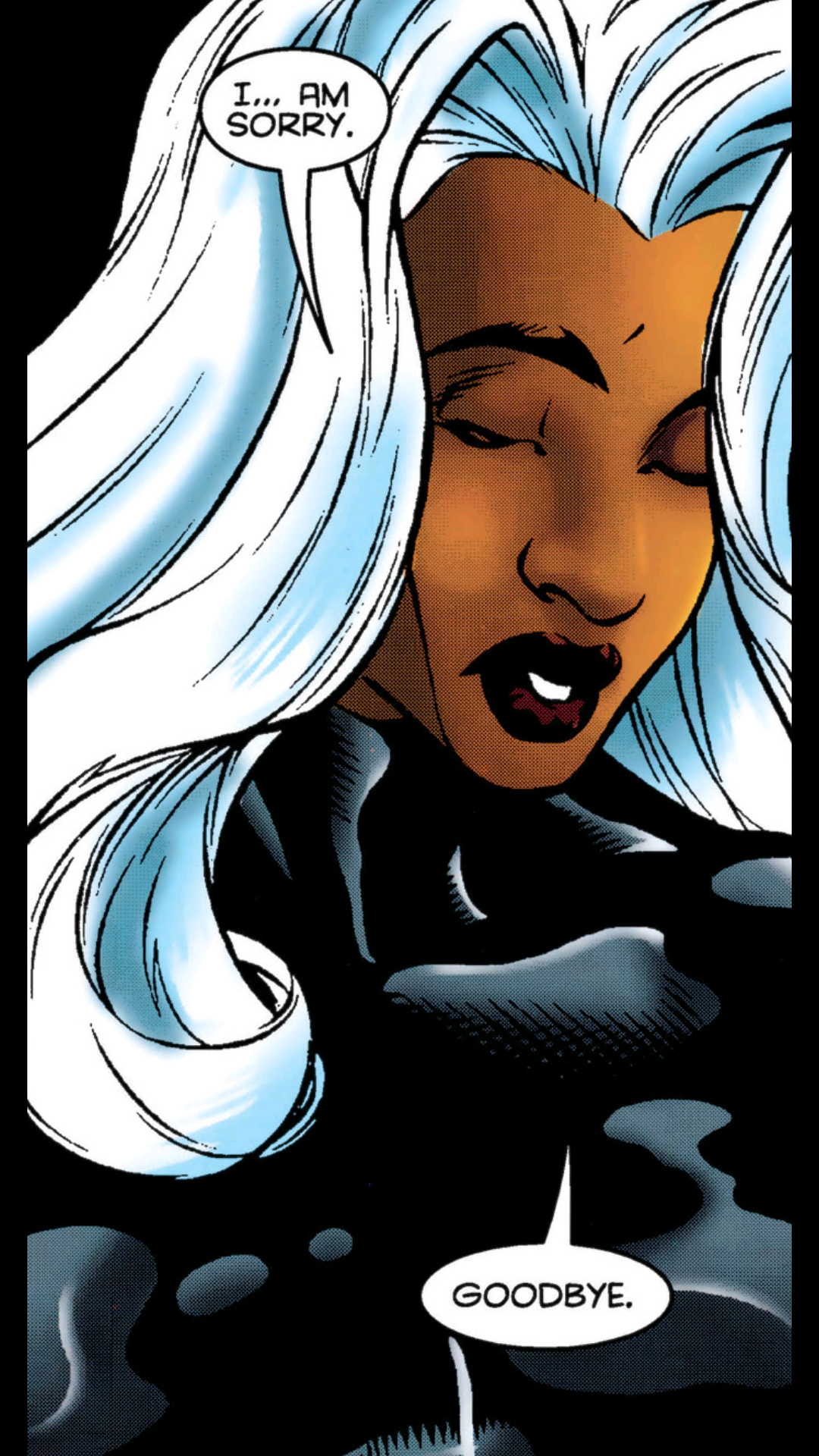 Dodson’s art is great. One thing I’ve always enjoyed with his work along with artists like Frank Cho is how strong they draw the women. They aren’t just sexual buxom bimbos (although, to be fair both still draw them buxom), but they are incredibly powerful looking women. Storm appears as physically capable in this story as any of the men she interacts with, and that is something I’ve always appreciated in good superhero comics. Another great example of this was how Frank Cho drew Captain Marvel in The Mighty Avengers series against how she’s drawn in her current series. Yes, Cho drew her much more sexualized, but he also drew her as a powerhouse of a superhero, not a slender palates instructor. This is a small gripe I have sometimes when I see art and storytelling I really appreciate.

Obviously this is going to get a higher rating from me because Ellis is involved. I’m a sycophant. Beyond that, this really is a great series for fans of the mid-90’s X-Men series (which I think I also liked more than the early 90’s personally). It has its flaws, but nothing which totally distracts from the story, writing, or art. I can’t help but recommend giving it a try if you’ve never read it.