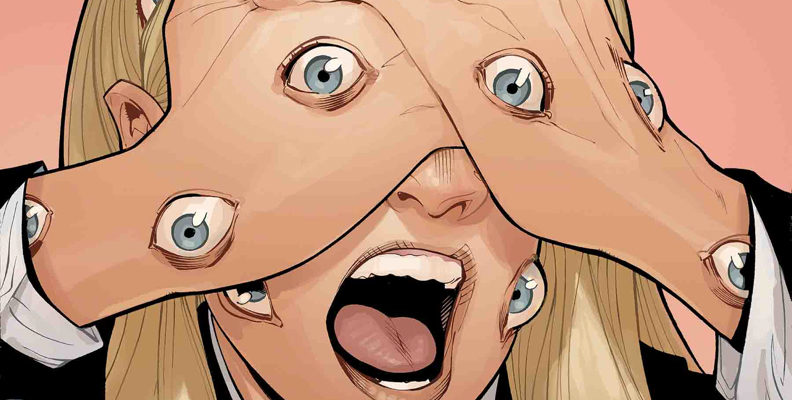 Farmer Andy recently had some eye surgery (you can find out more here!). So we made a list that he won’t read because I think he’s a mennonite or a luddite or some kind of “ite” that focuses on a career instead of playing all day on Facebook (I don’t care if you call it “marketing,” Jarid). Hopefully you don’t have ommetaphobia or else this list is gonna be rough for you.

Agamotto put all of his power into one of his eyes and gave it to the original Sorcerer Supreme. I needed a number 10. These lists are hard even without offering concrete or useful information.

Imagine you’re a knockoff superhero that everyone has forgotten about except for the two Force Works fans. Now imagine that you’re used to replace the Aunt May of superheroes which means you get to lose your sight. Now imagine that the only storyline you’ve played any major role in is turned into one of the most popular comic book movies of time, and they didn’t even try to introduce you. Poor, former-Spider-Woman.

I don’t know how he lost his eye. Honestly. I Googled it. I’m assuming it has something to do with his techno-organic virus. I can only assume that because Google doesn’t know, so nobody knows. Which feels par for the course on X-Men history and continuity.

In a story full of vague history, the history behind Hawkeye’s blindness definitely fits into the whole “vagueries” theme that permeates Old Man Logan. Hawkeye had cataracts but Avalanche made him blind. The story ignored a potentially great Miracle Worker spoof by not making him also deaf like he’s supposed to be… sometimes… depending on if the writer remembers he is.

I seriously barely remember this story. The Watcher had his eyes ripped out. I don’t know who did it. There were some weird and forgettable villains, but I think they just stole the eye. Did the eye-headed lady steal an eye or RIP it out? Or did Nick Fury do it? Thor lost his hammer for a few years, but got it back. Is Nick Fury still the Watcher? Does anyone care? No reason at all to care about that story.

You’d think for a guy that hangs out with crows on his shoulders there’d be an accidental reason for missing an eye. In actuality, Odin ripped his own eye out as a sacrifice to gain wisdom. Well, not in in “actuality” because it didn’t happen. Probably not at least. Anyways, that’s the official reason, and I’m sure some Thor issue somewhere plagiarized it.

Far from being the best villain, Morlun was also far from being the best optometrist. Apart from Morlun removing Spider-Man’s eye, in an obvious breach of proper disposal of human tissue he then ate Spider-Man’s eye. Look, I’m not one to judge someone else’s cannibalism, but eyes of any animal species have never been remarkably appetizing to me (especially Bette Davis Eyes).

I haven’t thrown a lot of bricks into people’s faces, but hitting someone perfectly to just pop their eye out is a pretty good shot. For this to be an accident while First Aquaman and Fire Robot (not 100% sure on the names, but Google is never wrong) were fighting, is shockingly unlikely. It’s almost like this was a made up story.

There was a time when doing a google search for “How Did Nick Fury Lose His Eye” wouldn’t return ten pages of mediocre “articles” from “news” websites relating agonizing descriptions of how the movie version of Nick Fury lost his eye. A cat/alien did it. Now, we only care about the real Nick Fury, in such that the realist version of a fictional character is always the first. The real fictional way Nick Fury lost his eye was by a Nazi explosion. Cat… Nazi…

In a story as old as time, a dude walking across the street is knocked away from a careening truck packed with toxic waste by a teenager who is then blinded by the toxic waste when is spills of the truck. Jaywalking kills, or at least blinds.