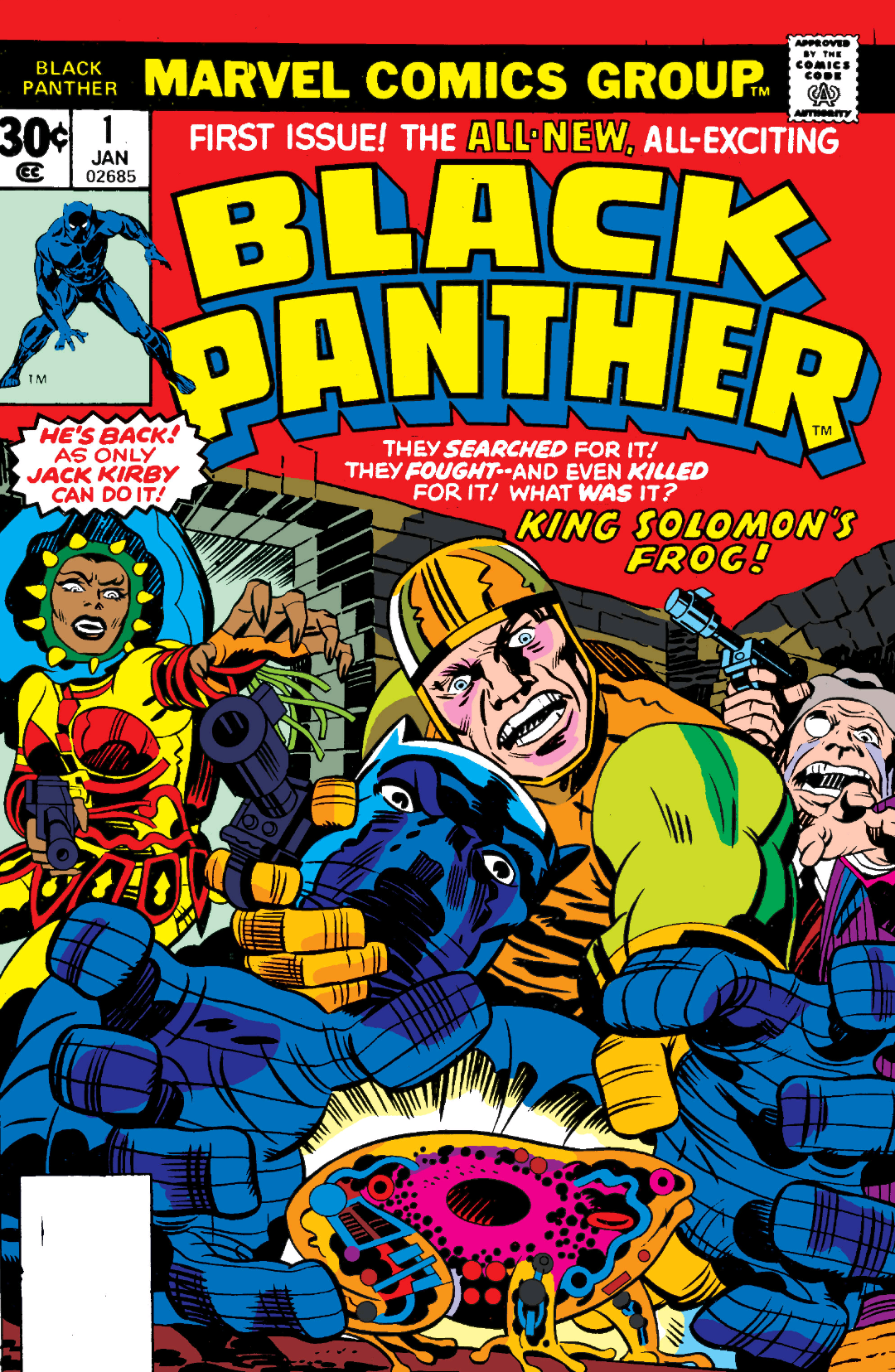 These are the first two issues of the first on-going series for Black Panther which ran for fifteen issues in total. Jack Kirby wrote and drew the first twelve of these issues, with Ed Hannigan and Jerry Bingham covering the final three. This series occurred at the same time that Kirby was also writing and drawing Captain America and the Falcon as well as 2001: A Space Odyssey. This is Kirby’s post-DC (where he created the New Gods among other classic characters) return to Marvel. Before the end of this far too short Marvel return (only 1976-1978) he would also go on to create, write, and draw Machine Man, Devil Dinosaur, and the New Gods-esque Eternals.

We start mid-story, so don’t fret if it doesn’t all make sense at first as Black Panther and Abner Little (his first appearance) walk in the office of an antiques collector/dealer Albert Queely only to find Mister Queely stabbed through the chest holding a golden statue of a frog in his stiff, lifeless right hand. Before Panther and Little can surmise the entire scene in Queely’s disheveled office, a strangely armored man with a long sword attacks them. Black Panther with great ease handles the armored man before he crashes through a window and runs off. Abner Little stops Panther from running after the man by pointing out that he is probably more startled and scared than maliciously dangerous due to being hurled in time to their current moments. Abner says this because the golden frog statue is actually a time traveling device and the entire reason Little contacted Black Panther and asked for his help. 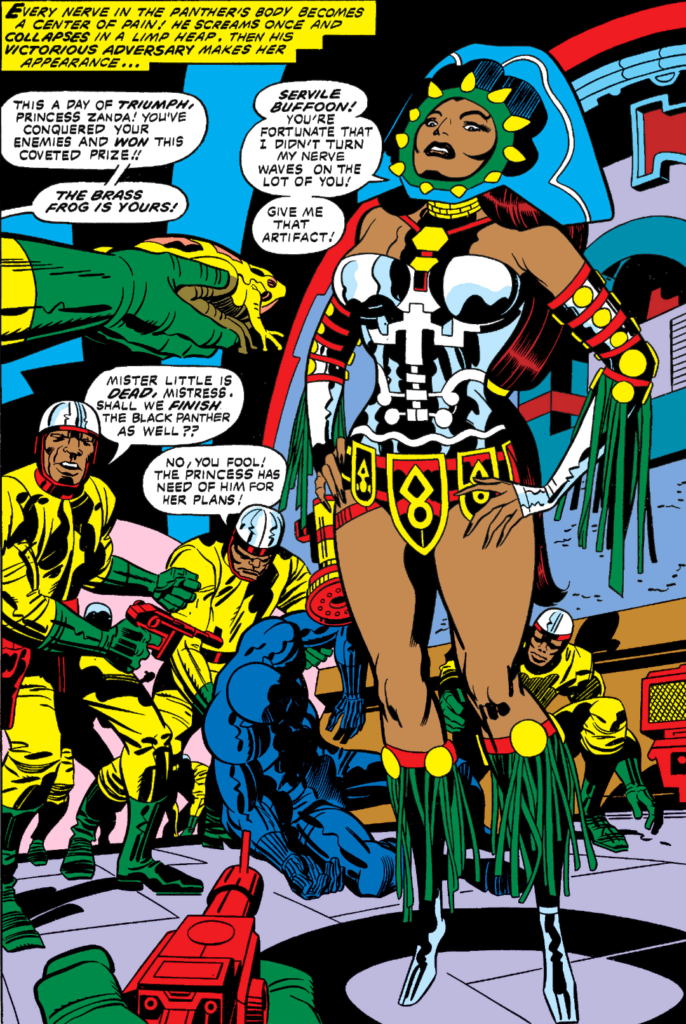 The two then take Little’s copter back to his home base. In the skies, the two are accosted twice by a group intent on stealing the frog statue away from our two protagonists. Abner shows off the abilities of his copter and handily maneuvers past both parties. Also around this point we get a short history on the frog statue.

The two then arrive at Abner Little’s home only to be attacked by another group of would-be-thieves. Abner is shot in the chest before Panther can leap into action. After taking out several attackers, a figure from the shadows hits Panther with a special ray gun which leaves him temporarily paralyzed. The attacker is revealed to be the lovely and dangerous Princess Zanda. Zanda wants the frog statue for herself. 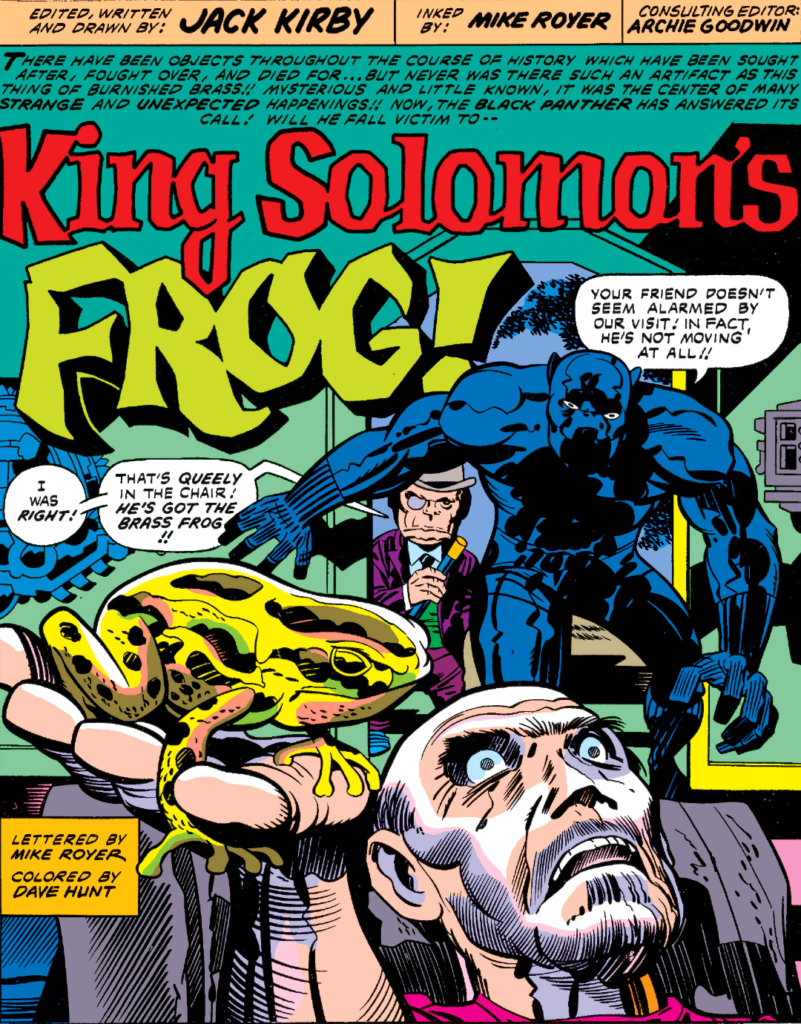 Black Panther is able to overcome the paralyzing effects of Zanda’s ray gun and grabs the statue away from her and her minions. One minion though is able to get a lucky shot off, hitting the statue in Panther’s hands and causing it to glow mysteriously. When the light dies down in the room, they are left with a humanoid looking creature with a giant head called Hatch 22.

Hatch 22 uses a mixture of either telepathy or mental magnetism to quickly dispatch of Zanda’s minions. One is even disintegrated by a beam straight from the back of the creatures head. Panther cleverly tricks the creature by doing a push up (seriously) and then punches him in the face. Hatch 22 appears to be knocked out. 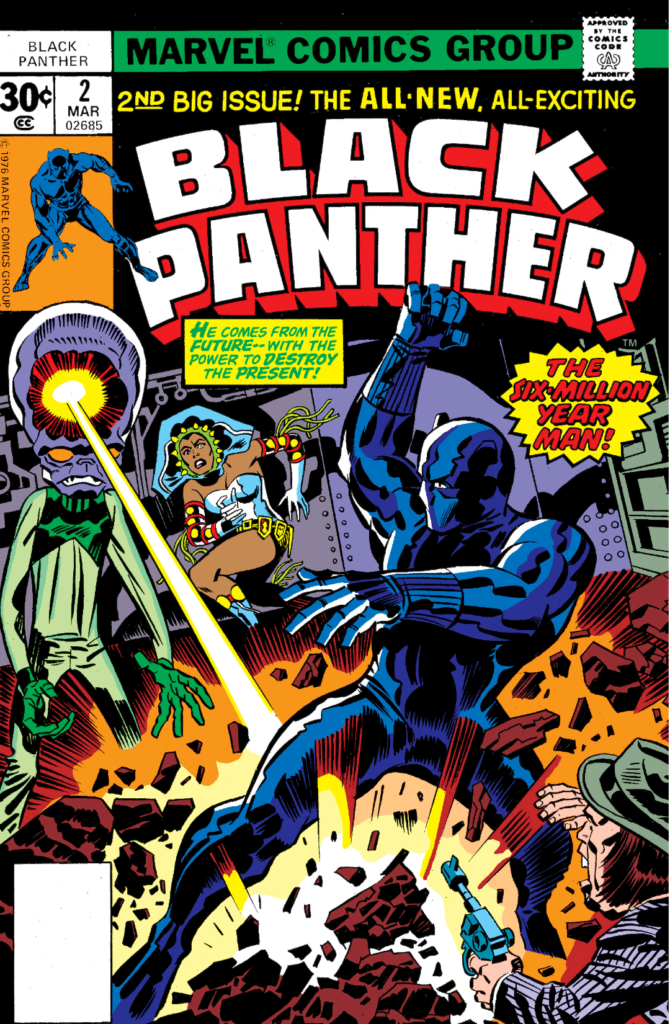 Panther and Zanda quickly and contentiously realize they must find the twin statue to the one they currently have in order to send the creature back to its original time. Panther slows down for a second to mourn the loss of Abner Little, but quickly discovers that Abner was wearing a bullet proof vest and merely has had the wind knocked out of him. The three then agree to work together to get Hatch 22 back to his original time when they are engulfed in a fog of ectoplasm. From this they are able to witness the future and realize that it’s Hatch 22’s time period. They also witness the full extent of his awesome might as they realize they were seeing everything transmitted from Hatch 22 while he dreamed.

Hatch 22 begins to stir and our three heroes begin to worry about what they are going to do. Abner Little fires a sleeping dart into the creature who is knocked back out and the three head over to Abner’s supersonic multi-plane to go find the other golden frog statue.

This is exquisite and quintessential Jack Kirby. During the early and mid-70s, whether it was published by DC or Marvel, you are no doubt in store for prime Jack Kirby, and these two issues are not exceptions. The layouts are phenomenal and frenetic and truly show the great artistry that Kirby was capable of. No character ever looks static and even the most simplistic seeming panels come to life with Kirby’s masterful pencils. If you’ve ever looked into or studied how Kirby actually drew, then these comics bring another astounding level to the artwork as you realize he never did outlines or layouts, rather he just started in one corner and worked across the page. The way he drew comics was a little the way Michelangelo carved statues. The page was already there for him; he just had to make it come to life. If you feel I’m giving far too much credit to this master of comic books, then I can’t help but feeling you aren’t truly a comic fan.

I will say that as great as the art is, it isn’t necessarily the level of some of his Captain America work at this time and I’m sure many would argue it isn’t as profound as his New Gods over at DC. However, that shouldn’t diminish from how great the art really is in these books.

The writing may be a bit much for modern readers who have maybe just gotten on board comics in the past ten years or so. It is obvious that Jack Kirby learned much of his writing technique from Stan Lee’s bombastic scripts. The description boxes are hard not to read in Stan Lee’s unique electric cadence even though he had little to do with these issues. Also, as it is with most comics from this era and even prior, they would never short change you on words per panel. You definitely got your money’s worth from reading these issues. Again, this may be irritating to modern readers, but if you understand the phases that comics have gone through over the years, this writing really is as great as most any was in the era. 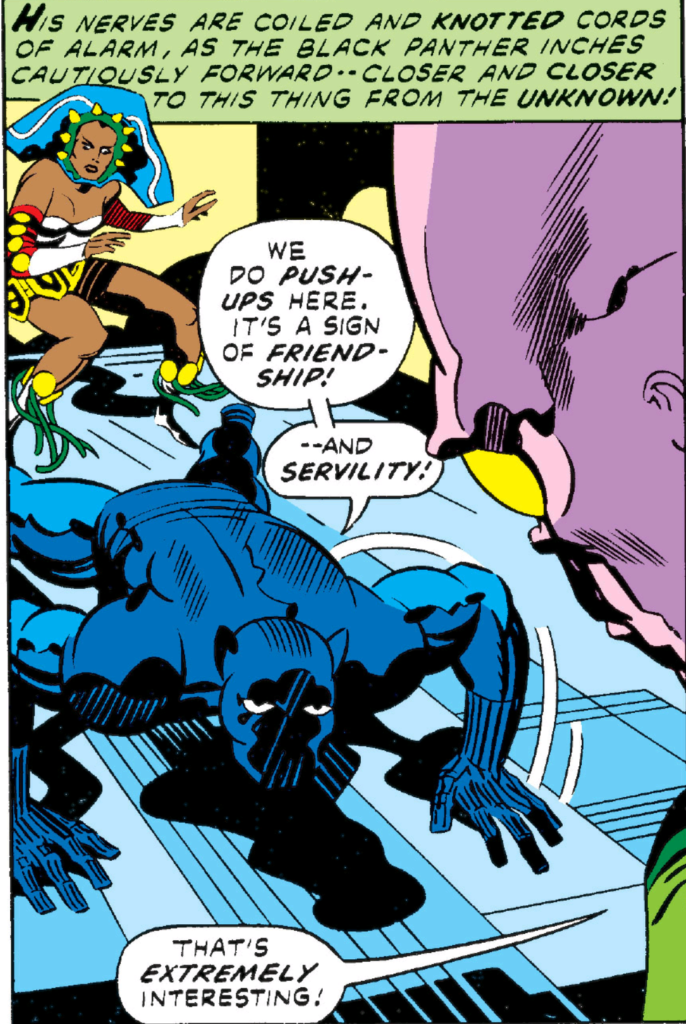 Another important point is that plot and character development did not appear to be Kirby’s focus in this series. Not to paint this in too negative of a light, but there is almost a Michael Bay quality to where Kirby is just trying to move us from one exciting scene to the next with little concern about what most consider foundational storytelling techniques. He’s definitely going for a “… and then…” method instead of a “… and so…” method. As he is able to capture us with his dramatic art, this really is not a major fault. Also, unlike Michael Bay who is a director who loves movement but basically only has three or four visual techniques he likes to use, Kirby never really feels like he’s giving us the same panel or angle or anything in multiple panels. There is enough energy and charisma in his art to forgive what some would consider a secondary form to advance plot. 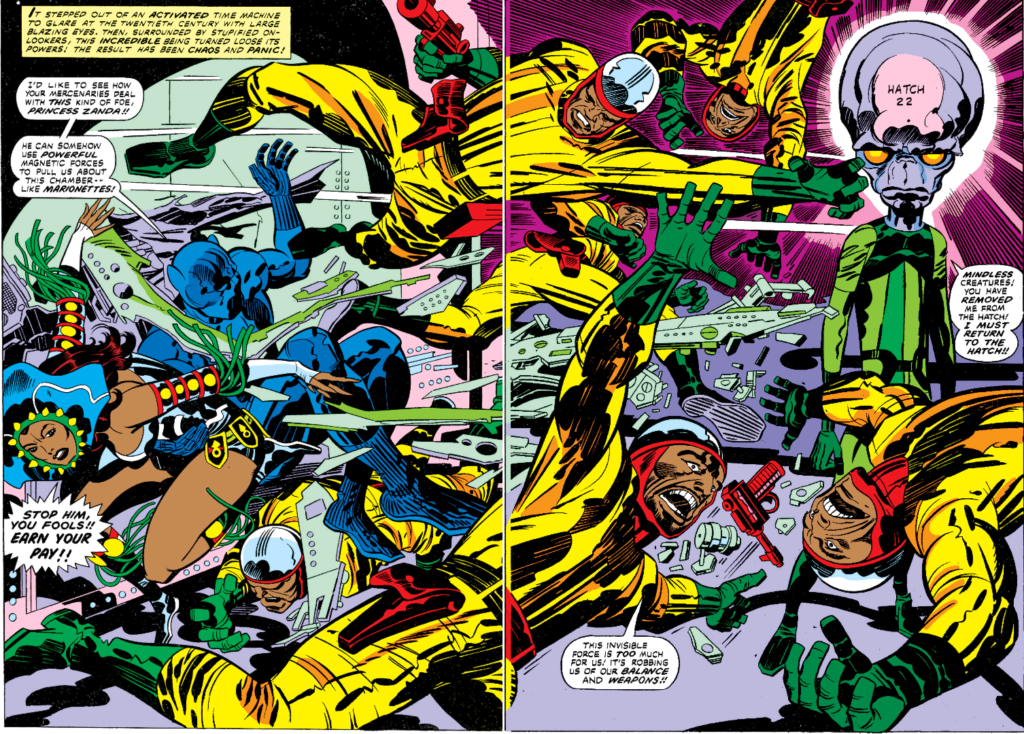 These issues aren’t Kirby’s greatest work, but that in no way signifies it isn’t great. I’m not sure this would be the best introduction to Jack Kirby’s work, as I personally think his Captain America run during this time, or his Fantastic Four run prior to leaving Marvel to go to DC are both better in many aspects. If you are a lover of Kirby (and if you are a comic fan, you really should be on some level) then this, of course, is a must read.