This one-shot “What If?” style story was Garth Ennis’ first time writing and defining what would years later become the iconic character he so firmly crafted and honed in his extended run at Marvel. For the time it was one of the darker and more cynical books Marvel released which may be why it was not included as an oversized issue in the classic second volume of What If?  being published at the same time. This issue is also at least a decade prior to the other zombie-rationalized series featuring either the Punisher or Deadpool again killing off Marvel characters, and gives a fresh perspective on the Marvel Zombie storyline given the saturation of those similarly toned runs.

The story starts years ago in Hell’s Kitchen, as a group of bullies beat up a young and yet-to-be-blinded Matt Murdock. A slightly older child, Frank Castle, comes to the aid of Matt, and after rescuing Matt, the two define their character differences that would differentiate themselves years to come.

Next, we jump years forward as Frank Castle is a grown man. The Avengers and X-Men are fighting the combined forces of a Skrull and Brood attack in a park in New York. Frank is racing towards the scene of the action as his wife has taken their kids to the park. 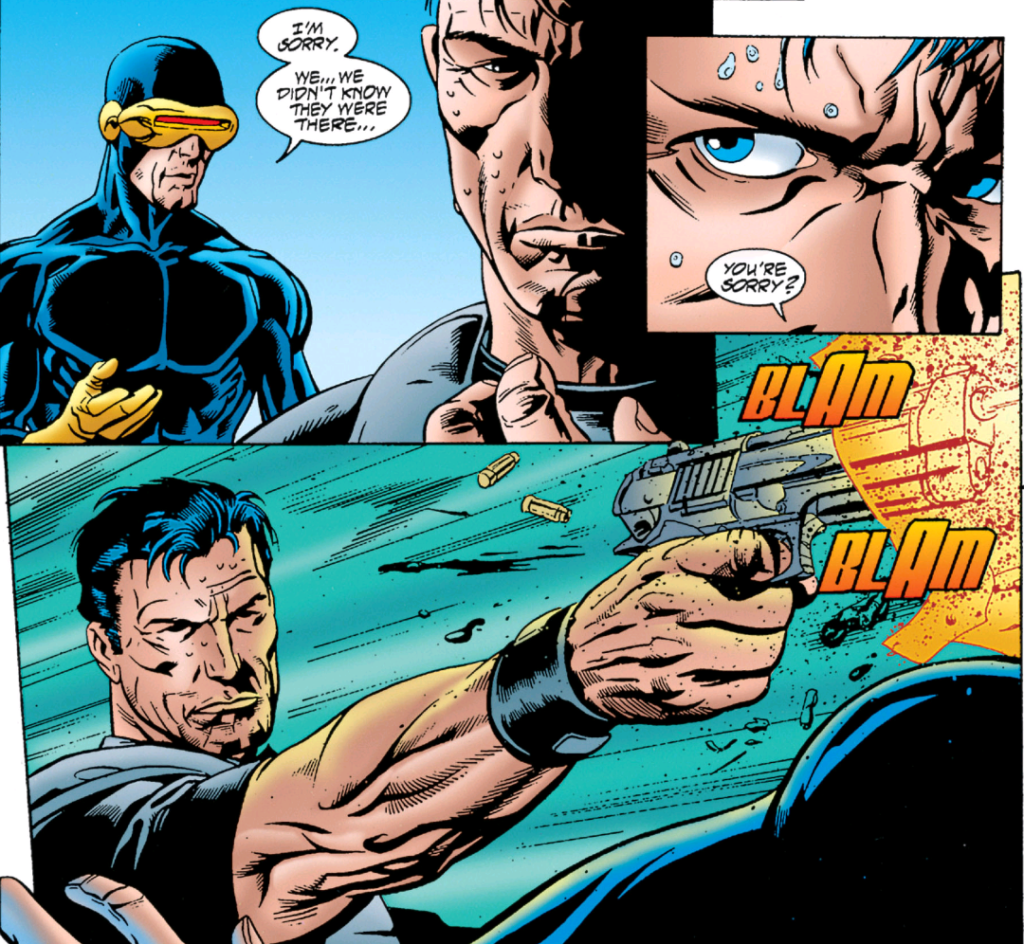 By the time Castle gets to the park the battle is over. Daredevil is reprimanding the two teams of heroes for their carelessness in fighting at the park which has caused the death of a woman and her two children, while Captain America and Cyclops defend the location of the fight given the immediacy of the battle. As they argue, Frank Castle runs to the corpses of his wife and children. Cyclops attempts to console Castle, but the rage and grief in Castle overcome him. He shoots Cyclops twice in the face and before he is stopped also puts down Hawkeye and Jubilee. Wolverine attacks scarring Castle’s face before Colossus grabs a hold of him to prevent Logan from killing Castle.

Frank is arrested and Matt Murdock takes the case to defend Castle, at least in an attempt to not get him a death sentence. Murdock does the best he can, and that gets Frank Castle life in prison. 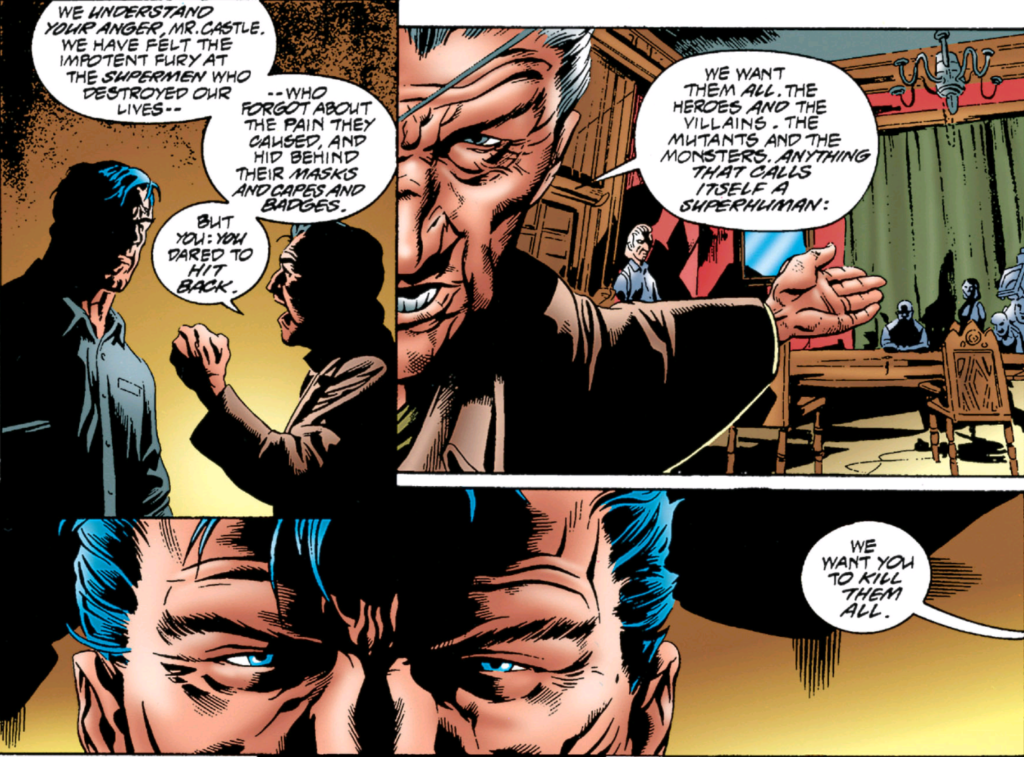 A man named Kesselring pays off guards and cops and gets Frank brought to his mountaintop villa. There, a secret cabal of other individuals who were injured by the actions of superheroes and villains offer Castle the opportunity and means to wipe them all off the face of the Earth. Frank accepts.

In his new role, Frank first goes after Venom and Spider-Man fighting in the sewers. He electrocutes both and finishes them off with a large assault rifle once they are weakened. Next he puts a tracker on The Hulk, and once he has reverted back to his human form Frank kills him.

Knowing he needs stronger weapons, Castle goes after Kingpin who he knows, thanks to Micro, has a large cache of weapons purposefully to take out superhumans. In a fight that resembles the bear attack scene from The Revenant, Kingpin continues to attack Castle even after being shot in the face, but eventually dies atop Castle. The cops rush in and arrest him for the second time. 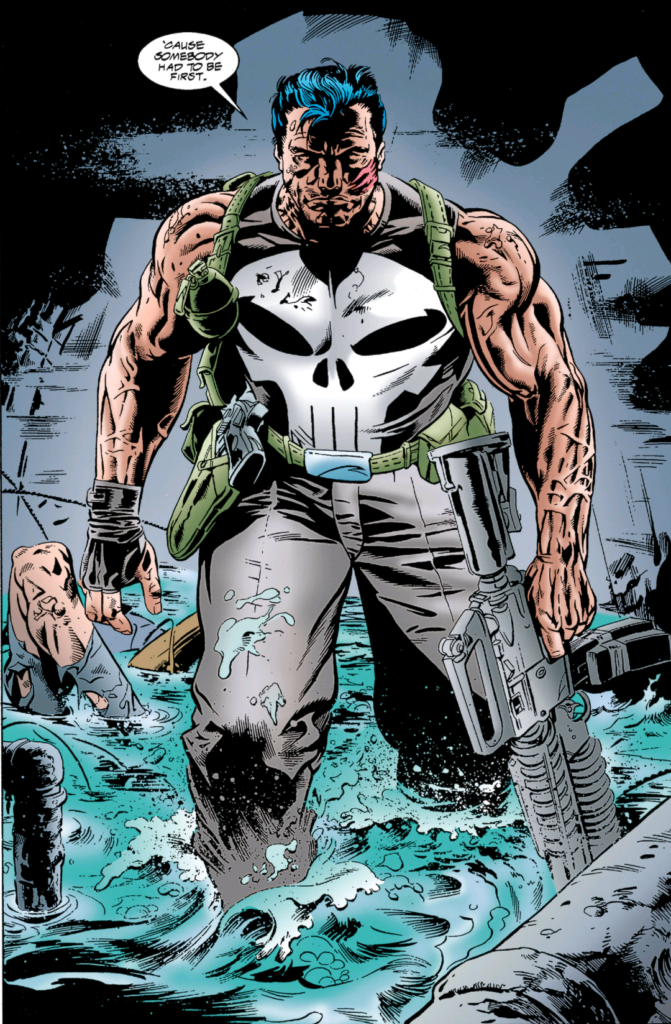 Once again Kesselring gets him out after a second conviction. This time, using the weapons retrieved from his assault on Kingpin’s tower, Castle travels to Latveria and disables all the Doombots in one swift act. Using a large steel sledgehammer, Frank crushes Doctor Doom’s skull. He and Micro raid Doctor Doom’s armory and head out having stollen a nuclear bomb.

In the blue area of the moon, the combined forces of the various X-Men teams, led by Storm, take on an army of their deadliest foes including Magneto and Apocalypse. Each side believes they were invited by the other side for an ultimate showdown by the other side, and right as Storm realizes it was a set-up, Castle sets off the nuclear device, disintegrating both sides.

Wolverine was not on the moon as he was on a mission in Japan at the time. Frank finds him when he is stumbling drunk and picks a fight. He uses Wolverine’s own claws to pierce his heart and throws him into a power-station hub, frying Logan into nothing but a skeleton. Punisher then goes after every other hero except for two and kills them all. All that are left are Captain America and Daredevil. After an epic and violent matchup, Captain America makes the mistake of turning his back on Castle, and he is shot several times in the back of the head.

After killing Captain America, Kesselring invites Castle to his villa and they celebrate his success. Frank doesn’t partake, but says he has one more to go after and he’ll be done. Kesselring threatens him and says that his work will never be done and he is to go after those children who are most likely to become superheroes in the future and those born with special powers. Castle shoots Kesselring in the face. Frank then threatens the rest of the cabal to never come and find him or he will kill them all as well.

Castle goes after Daredevil, and it appears Daredevil is the first truly formidable adversary Punisher hasn’t wholly prepared for. He gets an opening when Daredevil offers to help him change his ways, and Frank stabs him in the chest. Dying, Daredevil reveals to Castle that he is Matt Murdock. Realizing that he has become that which he has intended to put an end to, Frank finally kills the last by putting his gun to his own head.

Confirmed kill count: 40 (including his suicide)

I’ve always loved What If? stories; they have been some of my favorites as cynical takes on familiar and loved tales. This is basically one of those without having the “What If?” title. It is darker than most given the brutal (especially for the time) murder of so many beloved characters. Given that compared to today’s standards it is probably sparingly mild in terms of its explicit gore it is important to read it and realize this came out even before Ennis’ Preacher series which is also fairly tame in terms of violence compared to even the modern non-MAX Punisher series. While there were plenty of mature series available at the time, it wasn’t something that Marvel had really dipped their toes into, and that would be several years until the first MAX series was published. You may read this and think it is relatively tame. However, I can tell you that reading this at the time when I was fifteen and seeing the Kingpin scene was one of those comic moments etched into my memory. 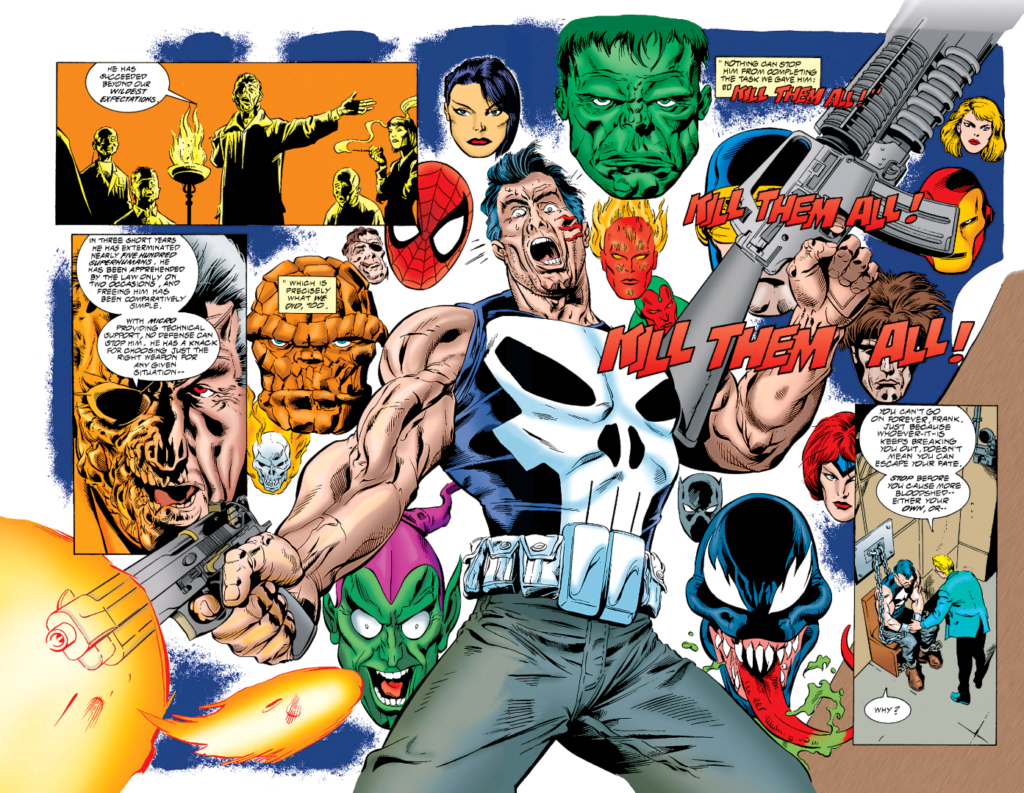 What about the writing and the art? Braithwaite’s art is fantastic. I think there is something left wanting on the colors in this book, but Braithwaite’s pencils are flawless. This is a guy that has helped Alex Ross when Ross got behind on books, so it goes without saying his work is always pretty outstanding. He does a great job at bringing energy to each panel which raisemakes this a very compelling and fast-paced read.

Ennis has his moments here. I won’t say this is his best work, and it isn’t even remotely his best Punisher work, but it still is highly enjoyable. I think there could be some logically raised questions over Wolverine’s death and whether that would’ve actually killed him, and how Castle got Kingpin’s weapons when he was immediately captured (maybe Micro stole them while Castle had the cops distracted). I understand that Daredevil was his final conflict to bookend the story and create Castle’s ultimate choice, but I had some obvious issues with Punisher handling Captain America and Wolverine easier than Daredevil. This could just be my perception on those characters and I’m nitpicking and missing the point and themes of the story. 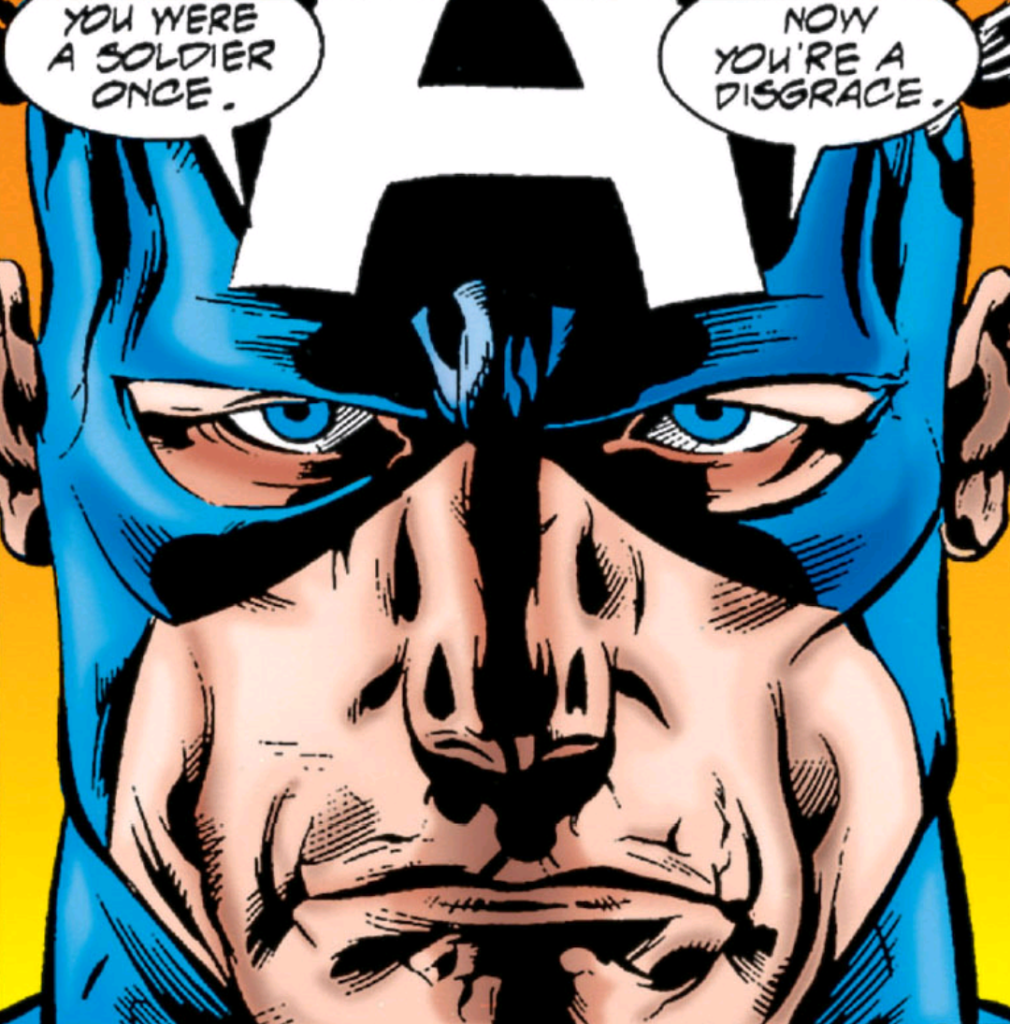 In terms of dialogue and actual pacing of the story, I think he did a great job especially given that this was a 40 page one-shot. More justice probably could’ve be given to the journey of Castle if this was turned into a three or four issue mini-series (as it probably would’ve been handled today). Given the probable editorial mandate to make a single issue story out of this I think a great job was done giving Castle great laconic dialogue and epic moments.

All said, if you are a fan of Ennis’ Punisher work, it is a true shame if you haven’t read this. If you are a “What If?” fan and never read this, I also strongly recommend this issue. I think it is easy to say that if you don’t like Punisher, you probably aren’t missing too much by not reading this (I mean besides the fact you don’t like a great character). I really do recommend this issue to most Marvel fans, because as “What If?” tales go, this is a solid entry.